Chainalysis said the increase in DeFi's adaptation was largely on the side of large investors. Large corporate transactions over US$10 million account for less than 50% of all cryptocurrency transactions, accounting for more than 60% of DeFi transactions in the second quarter of 2021.

According to a new survey, the overwhelming majority of Russian investors see cryptocurrencies as a more attractive investment tool than traditional fiat currencies or gold.

On Wednesday, Franklin Templeton, who has more than $1.4 trillion in assets under his administration, released a position for "Research Analyst - Cryptocurrency" on LinkedIn.

SBI Holdings to Establish First Cryptocurrency Fund to Invest in XRP, Bitcoin and Ether in Japan

Cryptocurrencies Are Now Accepted under Trade Law in Texas

Two bills aimed at advancing the adoption of cryptocurrencies and blockchain have now become law in the state of Texas.

In its latest note, quoted by Business Insider, JPMorgan claims that the ongoing rally should be seen as a major red flag by cryptocurrency market investors.

Bitcoin, which gained about 0.35 percent in the morning, is priced at $49,522. Financial giant SBI Holdings plans to launch Japan's first digital asset fund, including Bitcoin, by December, Bloomberg reported. Fund and ETF news, which we think is important for money flow, has gained momentum recently. Positive for Bitcoin and the general market.

When we consider BTC/USDT parity in technical terms, BTC broke its downward trend as of August 23rd upwards yesterday and closed on it daily and successfully rejected the falling trend as of this morning. When we examine it over a four-hour period, it appears that the get signal continues in the MACD. In BTC, which is testing the downward trend that exists in MACD as of July 26, we think that if this level breaks upwards, the rise for Bitcoin will accelerate. Our next short-term price target is $51,200. 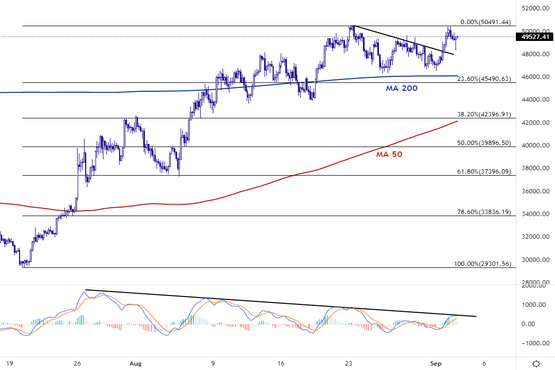 Ethereum, which gained about 0.7 percent in the morning, is priced at $3811.35. Chainalysis said the increase in DeFi's adaptation was largely on the side of large investors. Large corporate transactions over $10 million account for less than 50% of all cryptocurrency transactions, accounting for more than 60% of DeFi transactions in the second quarter of 2021. The medium and long-term outlook is positive, considering that the adaptations and rises in DeFi, as well as in the recently mentioned NFT sector, have a positive effect on ETH.

When we consider the ETH/USDT parity in technical terms, we see that although yesterday closed slightly negative days after sharp rises with volume above the 2-day average, trading volume was below the average for the last 20 days. Therefore, we believe that the reaction at the $3840 levels is limited and that the rises for ETH will continue. This supports our view in MACD, which signals the receive in the daily period. Our next short-term price target is $4170. 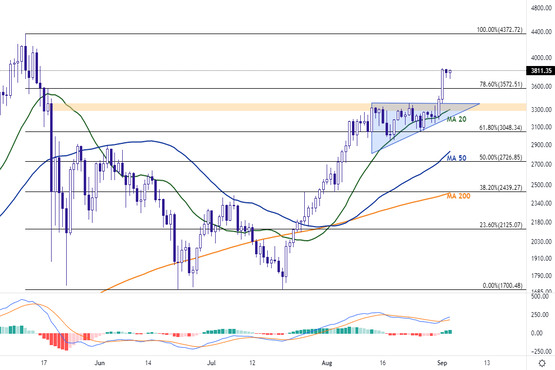 AVAX, which gained about 3.55 percent in the morning, is priced at $49.29. When we examined the AVAX/USDT pair technically, AVAX, which had completed the correction movement at $38.16, which corresponds to Fibo'23.60, broke its downward trend as of August 24 with above-average trading volume and successfully performed its rejection and continued its upward movement. As we noted in the bulletin yesterday, we think that with the upward break of the downward trend, there will be rises towards the February 10 peak level of $60.30. A lockdown for AVAX will take place on September 5. It is worth watching the price movements closely closely with this date. AVAXcan create sales pressure. 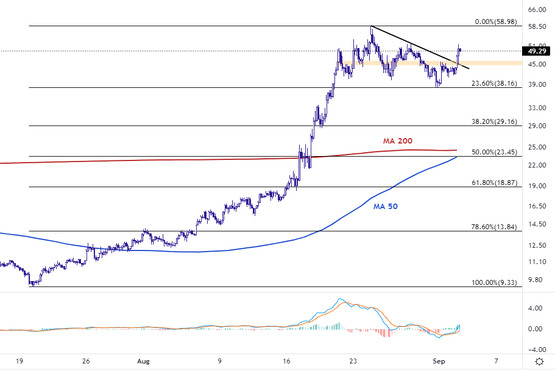 Ripple, which gained about 2.1 percent in the morning, is priced at $1.2799. When we consider the XRP/USDT pair technically, the downward trend as of August 15th was broken up from $1,243 with the golden cross (the 50-day moving average cutting the 200-day moving average up) on September 1. After the breakdown, the daily close was on trend. Considering the MACD, which is recovering in the daily period and is about to signal the buy, we think the rises will continue towards our initial price target of $1.41. 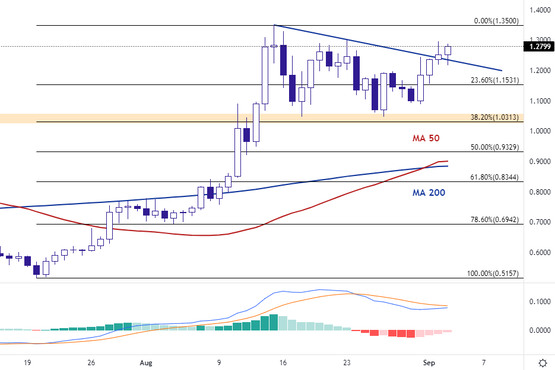 LTC, which gained about 1.96 percent in the morning, is priced at $186.5. When we consider LTC/USDT parity in technical terms, LTC, which recently broke the long-term jamming area upwards, continues to rise with the breakdown. The 200-day moving average, which we consider to be of great importance to LTC, stands at $193.5. The outlook for MACD in the daily period supports the rise for LTC, where we expect an acceleration in price movement with this average breaking up. The outlook is positive for LTC, which will relax after holding above the $207.1 level, which corresponds to the Fibo'50 slice. 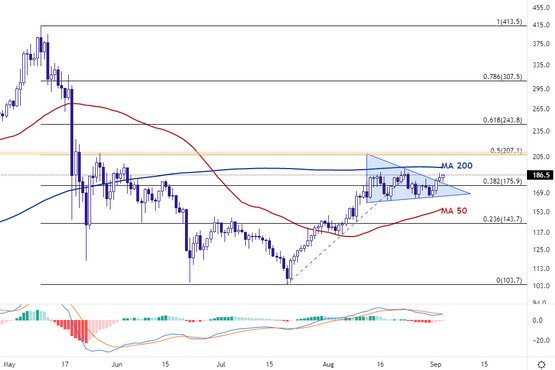 LINK, which gained about 1.00 percent in the morning, is priced at $30.24. If we examine the LINK/USDT parity in technical terms, when we examine the price movement of the last 3 weeks, we see that despite the pressure that the 200-day moving average, which we think is of great importance, has recently broken its 200-day average upwards from $28.1 with above-average trading volume, and has successfully held above this level. We think the upward trend towards our initial price target of $31.33 will continue. The rise can be expected to harden with the upward overrun of the resistance zone close to Fibo'61.80, which equates to $31.33. 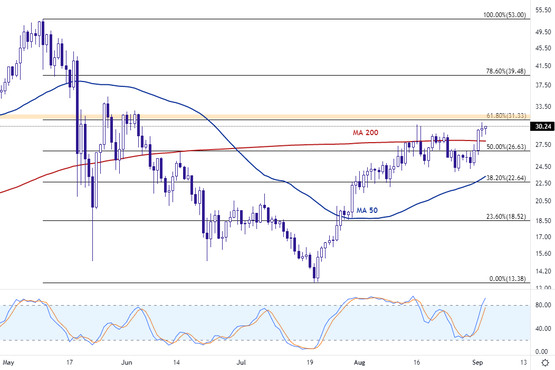 BAT, which gained about 1.05 percent in the morning, is priced at $0.861. When we consider BAT/USDT parity in technical terms, it continues to be priced above the rising major trend, which passed the july 20 low and the august 19 low. BAT, which is seen as holding on to its 200-day moving average, continues to signal MACD over a 4-hour period, but momentum is slowing in the direction of ascension. Our short-term price target of $0.908 for BAT remains valid. 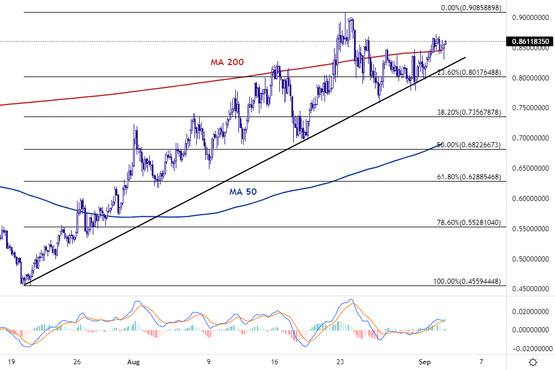