Derville Rowland of the Central Bank of Ireland stated that the growing popularity of cryptocurrencies such as Bitcoin is of great concern and that investors could lose all of their investment as they are highly speculative and unregulated.

Yao Qian of the China Securities Regulatory Commission mentioned that the central bank digital currency (CBCD) can work directly on the Ethereum network, while explaining the key points in the CBCD research and development phase.

A Singapore-based multinational bank has issued digital bonds worth SGD 15 million (US$ 11.3 million) in its initial security token offering, with a maturity of 6 months and a coupon rate of 0.6%.

In South Korea, the Financial Supervisory Service, one of the country's financial regulators, will lead the government's efforts to oversee the country's expanding cryptocurrency market.

No Ban on Cryptocurrencies in India

After the news that Bitcoin was banned in India in the past, the Reserve Bank of India made it clear that Bitcoin and cryptocurrency exchanges are not banned in its article published on May 31.

Digital Currency Directive from the Central Bank of Brazil

While the Brazilian Central Bank has issued a note showing general guidelines for a hypothetical central bank digital currency design, although no concrete steps have yet been taken in this regard, it seems that this possibility is discussed at the institution with this document.

There has been an increase in the number of Bitcoin HODLers. About 221,000 Bitcoins have been accumulated recently, more than $8 billion at current prices.

While Bitcoin closed May with 35 percent minus, the average return for May of the last five years was about 27 percent positive. We know that the statements made by Tesla, China, Iran and the USA were highly influential in this period. However, when we look at the on-chain data, Bitcoin's transaction volumes fell to the lowest level in 3 months, while the entry to the stock markets reached the lowest level in 5 months. Bitcoin, which is less mined due to the ban, has been added to the lowest transaction fees since January. Maybe this situation can regain interest in Bitcoin. BTC purchases in liquid wallets also continued. We do not detect a negative situation on a metric basis.

When we consider the BTC/USDT parity technically, our main position is the price returning from $ 33,333 this morning, although it was priced horizontally in the region of 37 thousand, it could not break the level of 40 thousand and the gap in futures BTC at $ 48,350 level. However, the weekly averages started to recover and started to close the gap with the 30-day average. Because if this region gives a bottom signal, these two averages should cross each other in the buying direction. We rose again to the Boll midband. The main support for the day will also be at $36,300. 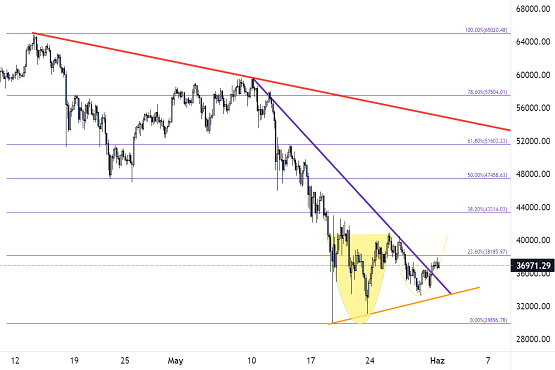 Ethereum, which rose by about 0.7 percent in the morning hours, is trading at $2645. Although there is no significant change in the number of balance accounts and new addresses, the fact that the amount locked on Ethereum 2.0 exceeds $ 14 billion shows that Ethereum is perceived as a safe haven in the market. Network fees are also low, providing a medium for movement for ETH and ERC20 tokens.

When we look at the ETH/USDT parity technically, we see that it has broken the downward trend that has been going on since May 12 and provides permanence here. If the ETH / USDT pair, which has support in the $ 2575-2595 band, continues to move above this support level, we expect the Fibonacci correction to move towards the $ 2749 level, which corresponds to the 50% slice. Since this level is an ok or continuation level and it is a tried and rejected area twice before, it is a very strong resistance and the price movement towards the $2930-3000 band can accelerate with its breaking. 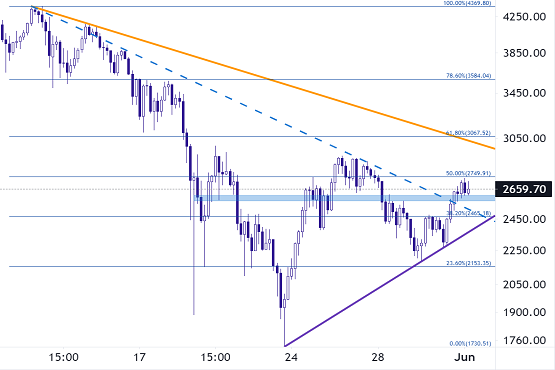 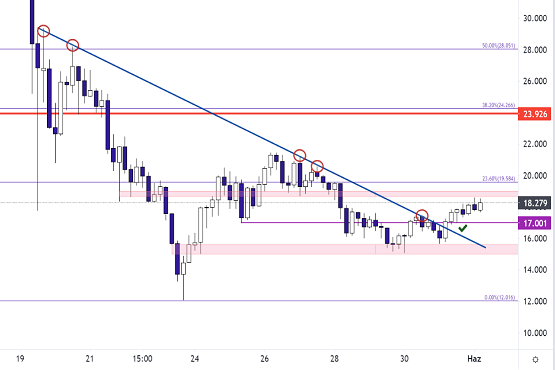 Rising 2 percent in the morning, XRP is priced at $1.07. The case continued positively for Ripple, whose price action accelerated after the SEC received consultancy on Ripple and rejected its request to access third-party data, with the decision in favor of Ripple, which we broadly included in our newsletter on May 31. The next important date appears to be June 10 and a response will be sent by Ripple to the SEC.

When we consider the XRP/USDT pair technically, XRP, which is priced at $1.07, is trading above the 30-day DEMA. We see that the Parabolic SAR has started to give a buy signal and supports the price rise for XRP. If it holds $1.05-1.06, we expect the price to move towards the $1.20 levels, which coincides with the Fibo retracement level. We maintain our positive view for XRP. 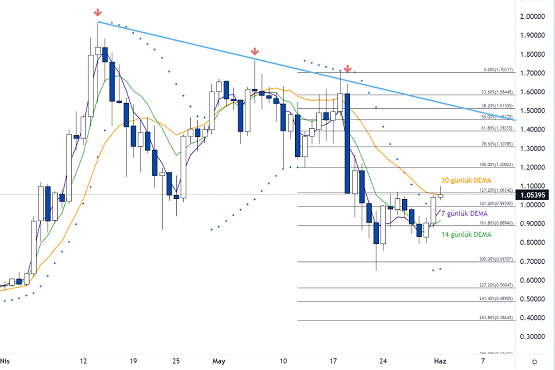 LTC is down about 2 percent this morning, pricing at $ 184 levels. When we look at market indicators based on chain data for LTC, which is 54.6% below the peak level of $ 412, the current price of LTC is read as suitable for long-term purchases. Puell Multiple, which allows us to look at the market from a mining perspective, shows that the peak level for LTC has not been reached yet. Although there are news effects in the market for short-term price fluctuations, we read the overall picture as positive for LTC.

When we consider LTC/USDT technically, LTC tested the minor downtrend for the third time, broke this trend upwards and held on it. With this break, it broke up the key resistance level found in the $ 181-183 band and the $ 182 level, which is the Fibo'23.60 bracket. The fact that LTC, which has turned these important levels into support, has also broken the important level of the RSI 50, which is the important level of the 4-hour period, shows that these movements can continue. Our next target for LTC is $204.5, which coincides with the major downtrend. If Fibo'23.60 cuts down the $182 level, the Fibo'38.20 slice at $167 will act as support. If there is no negative news flow that will affect the market, we think that the bullish movements for LTC will continue. 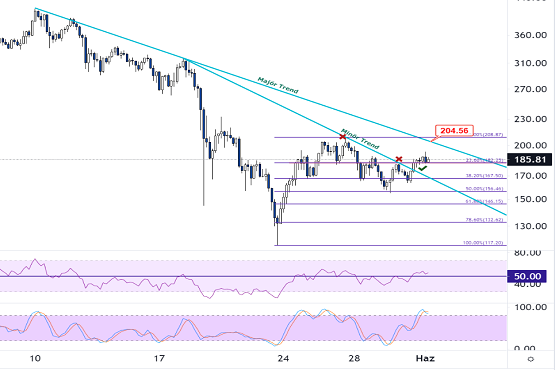 LINK is priced at $30.8 this morning, with a 3.5 percent depreciation. When we look at the chain data for LINK, when we look at the 7-day average of transfers to exchanges, we see that investors are moving their LINK from exchanges to wallets. This metric gives us; It shows that the current price of LINK is attractive to investors and they want to keep it by moving it to their wallets rather than keeping it ready to sell on exchanges. We read the medium and long-term direction as positive for LINK, which does not dominate the short-term trend.

When we consider LINK/USDT technically in the 4-hour period, we see that the trendlessness is dominant in the price movement. With the short-term upward momentum we mentioned in the bulletin yesterday, LINK, which broke the minor falling trend that started on May 27, tested the minor falling trend from May 18 and 27, but could not hold on. The RSI for LINK, which is priced just below this minor trend with the reaction it has seen here, has sold stochasticly even though it is hovering in the middle. For LINK, which is dominated by horizontal trends and unstable movements, a retracement to $ 29.00 and $ 26.50, which is the Fibo'38.20 slice, may be experienced as a result of horizontal movements. If it breaks the minor downtrend, which is priced just below, we expect a rise in the major downtrend formed as of the peak of May 10. We see the $34.5 level, which is the major downtrend and also the Fibo'23.60 tranche, as a target. 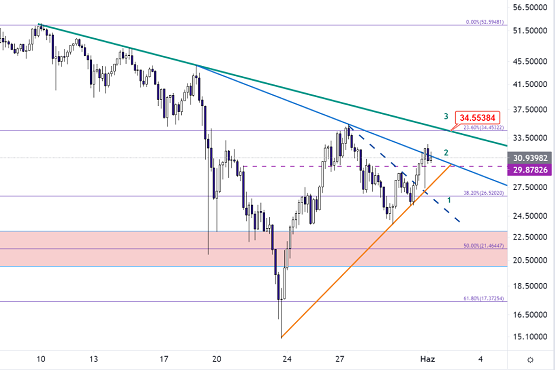 BAT is priced at $0.755 with a loss of approximately 1.2 percent this morning. When we consider the BAT / USDT parity technically, there was a price movement that was squeezed between the falling channel lower band and the falling trend yesterday. The falling trend was tested for the fourth time yesterday evening and the upward trend was exceeded. Although BAT continues to move above this falling trend, there is no clear trend breakdown. If BAT, stuck between the trend and the 61.80% slice, the key Fibonacci retracement zone of $ 0.76, breaks this tightening area up, we expect price action towards the channel mid-band of $ 0.88. Although the 4-hour stochastic has given a sell signal, the RSI is at comfortable levels and there is a comfortable area for an upward move. We expect BAT to maintain its uptrend and move towards the channel middle band in the absence of any negative news flow that will affect the overall market. 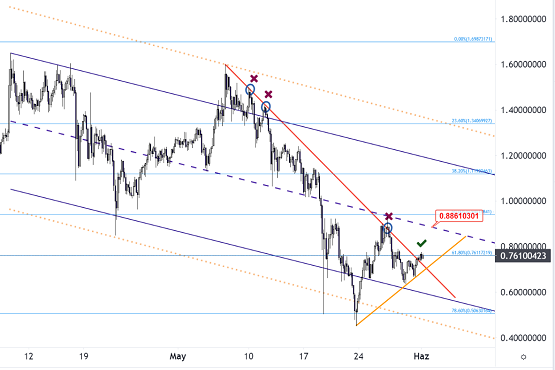