14% of Financial Advisors Use or Recommend Crypto Assets
In a survey of more than 500 financial advisors, 14% of financial advisors said they use or recommend Bitcoin and cryptocurrencies, compared to less than one percent last year.

The transfer of locally acquired cryptocurrencies in South Africa to overseas cryptocurrency exchanges will be criminalized under the new regulations.

Warning from Regulators to Financial Institutions in Mexico

DeFi-based cryptocurrency tracker Nansen has raised $12 million in a funding round led by Andreessen Horowitz (a16z).

John Williams, Chairman of the Federal Reserve Bank of New York, stated that the emergence of cryptocurrencies is contrary to current regulations.

According to the Spanish newspaper El Economista, the Spanish Socialist Party (PSOE) has submitted an illegal proposal (PNL) aimed at launching a national digital currency as a solution to the reduction in the use of physical cash.

UK's NatWest Bank Limits Transactions to Cryptocurrency Exchanges
As cryptocurrency pressure continues in the UK, another bank has intensified its efforts to restrict its customers' use of digital assets. According to a Reuters report, Natwest Group has limited the daily amount its customers can send to cryptocurrency exchanges.

Bitcoin, which fell by 2 percent in the morning hours, is priced at $ 34,935. According to the chain data, there was $47 million worth of Bitcoin outflows from the stock markets yesterday, while this development can be interpreted positively, the Tether exit from the market yesterday, albeit at low levels, supports this withdrawal we experienced in the morning.

When we consider the BTC/USDT parity technically, we see that it rose to $ 36,740 yesterday, but could not break the resistance at these levels and retreated to $ 35 thousand as of the morning hours. The downward trend, which has been continuing since May 10, was broken upwards yesterday. In possible pullbacks, the $34,742-34,823 band, which coincides with the weekly DEMA and Fibo'23.60 retracement levels, and the two-week DEMA ($34 thousand) levels will be support levels. In case of a continuation of the upward movement, $36,740 and $39,221 will be resistance levels, respectively. The MACD maintains its overbought signal in the daily period. 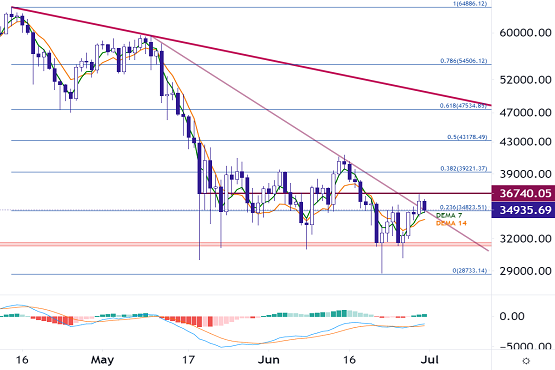 Ethereum, which lost value by 1 percent in the morning hours, is priced at $2134. We see that the number of active and new addresses, which has fallen considerably in the past days, has tended to recover in the last few days, and at the same time, there was $181 million worth of Ethereum exits from the exchanges yesterday. We interpret all these developments positively. In addition, the expected London hard fork on Ethereum will take place in July. We maintain a positive outlook for Ethereum in the long term.

When we look at the ETH/USDT parity technically, we see that it is holding on to the support at $ 2079 and the weekly DEMA, as well as breaking the downward trend as of yesterday. In possible pullbacks, the support levels will be $ 2079, $ 2011 and $ 1968, respectively, and the resistance levels will be $ 2253 and $ 2329 in the continuation of the upward movement. 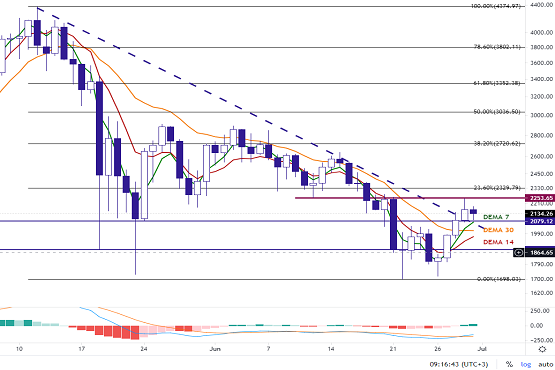 AVAX depreciates by about 3.6 percent in the morning and is priced at $11.48. When we examine the AVAX/USDT parity technically, AVAX, which broke the major downward trend in the 4-hour period from $11.80 yesterday, could not hold on to this trend and started to price gold again. AVAX, which gained an upward momentum with the support it found at $9.80, which coincides with the Bollinger lower band on June 26, seems to have lost this momentum for the time being by seeing a reaction from the Bollinger upper band yesterday. If the downtrend cannot be broken up again, there may be a pullback towards the Bollinger middle band of 11.18 and the horizontal support level of $10.67. If the downtrend breaks again and holds above, the $12.94 level, which corresponds to the Fibo'50.00 slice, is read as the target. 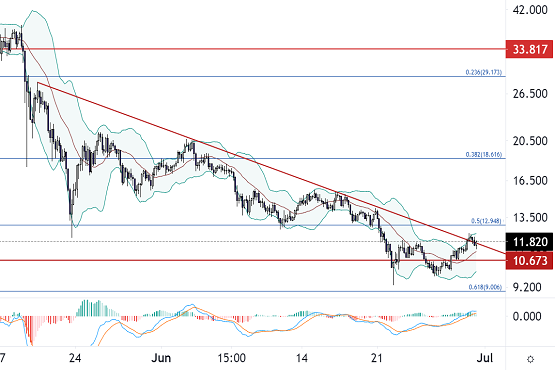 Losing 3.84 percent in the morning hours, Ripple is priced at $ 0.679. While we wait for the letter to be delivered to the court from Ripple on July 1, we can say that silence prevailed in the case process for both parties.

When we examine the XRP/USDT parity technically, we can say that the downward trend, which has been continuing since May 18, has been broken upwards and the weekly DEMA has been sustained. Support levels to be followed in pullbacks are $0.66, $0.638, $0.629 respectively, and the first level of resistance to follow in upswings will be $0.755. For XRP, which is guided by the general movement in the market and the news flow is quite weak, purchases near support and sales near resistance will be healthier in the short term. 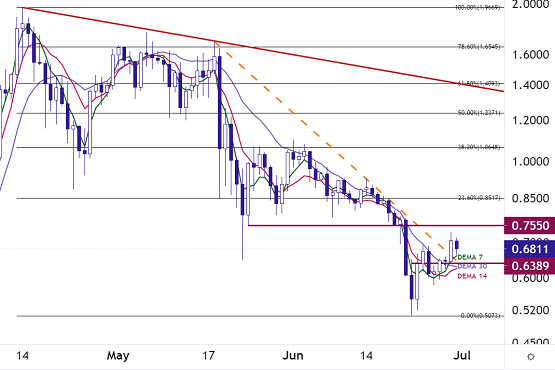 Litecoin is priced at $142, depreciating by 1.5 percent in the morning hours. When we look at the chain data for Litecoin, the 7-day average of the number of active addresses continues to increase and there is a recovery in the number of new addresses. With the recovery in the market, we see an increase in the interest of investors in LTC.

When we look at LTC/USDT technically, it broke the descending channel that has existed since the peak level of May 10 at $ 133 with above-average trading volume. Climbing above the resistance zone in the $137-139 band, LTC retested this resistance zone this morning. The 7-Day DEMA cut the 14-day DEMA upwards and gave a buy signal, and with it, the upward movements gained momentum. Unless there is a 4-hour close below the $139.5 level, the $158.6 level, which is the Fibo'23.60 slice, is the next resistance level. The outlook for LTC is positive. 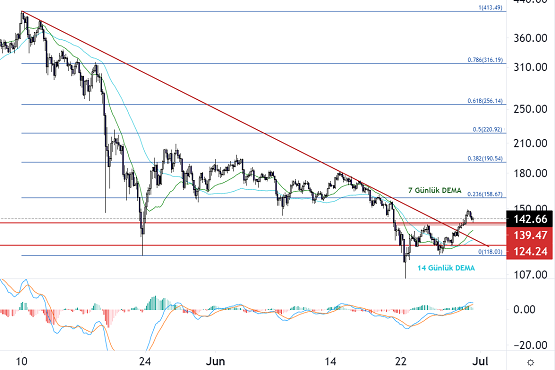 LINK, which lost 2 percent in the morning hours, is priced at $ 19.13. When we examine the chain data of LINK, it is possible to say that the increase in the balance addresses continues, but although there is a decrease in the number of new addresses, this decrease remains at very low levels.

When we look at the LINK/USDT parity technically, we see that it is priced just above the descending trend that has been going on since May 10, but although it tests the $ 19.69 levels, which corresponds to the correction level of Fibo'23.60, it could not be sustained. For LINK, $19.69 in the morning is the first resistance level and if this level is broken, we expect price movement towards $23 levels. However, if the downtrend continues, $18.57, $17.66 and $17.38 will be support levels respectively. In the short term, buying near support and selling near resistance may be more appropriate. 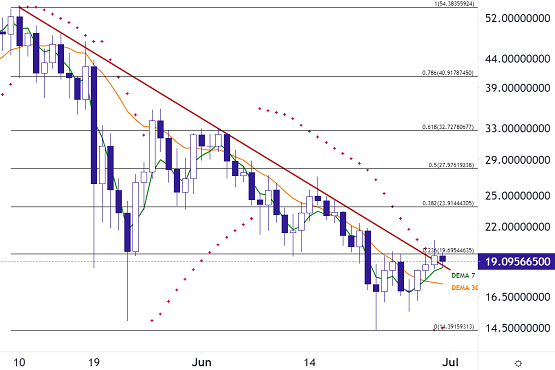 BAT is priced at $0.56, depreciating by about 3.6 percent this morning. We see that the interest in BAT on the institutional investor side has been going on for a long time. In the last 24 hours, 45,260 BAT funds have been purchased on Grayscale. When we examine BAT/USDT technically, BAT, which tested the descending trend that has existed since May 27 in the daily period, broke above the level of $ 0.581 yesterday, and made the daily close above this descending trend. When we examine it in the daily period, the buy signal on the MACD is preserved. BAT, which reacted yesterday from the region close to $ 0.615, which is the Fibo'23.60 tranche, closed below the Bollinger middle band. Although it falls below the descending trend again this morning, it is expected that the upward movements will continue as long as the daily close does not come under this trend. In this case, the first target is 0.615, which is the Fibo'23.60 tranche, and $0.70, which coincides with the Bollinger upper band. Although the outlook for BAT is positive, if there is a daily close under the descending trend, there may be a pullback towards $ 0.539. 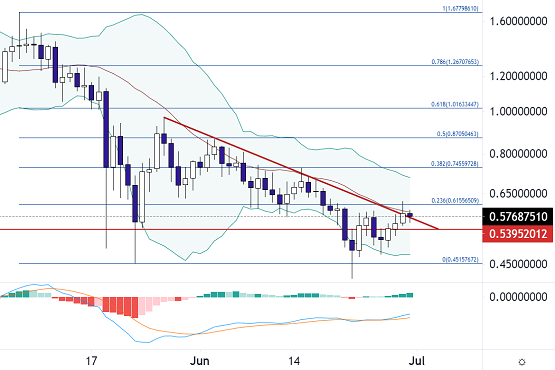