Digital Dollar Prototypes Will Be Announced

According to current statements by the US Federal Reserve Bank of Boston and Massachusetts Institute of Technology, the first prototype of a digital dollar is planned to be announced in early July.

Another Lawsuit from SEC

The US Securities and Exchange Commission (SEC) filed a lawsuit against LBRY, a blockchain company, on the allegation that it sold unregistered securities, according to published court documents. The SEC argued in a statement that the company sold its securities assets as LBRY Credits (LBC).

Payment giant Visa has announced that it will add USDC, a stablecoin indexed to the US dollar, to its payment network. According to the Reuters statement, the company has launched a pilot program and plans to offer this option with more business partners later this year. The company has also announced that it will use the Ethereum (ERC20) network.

According to data from data analytics company CryptoQuant, the amount of stablecoins on the exchanges has exceeded $ 10 million, setting a new all-time record. Thus, the reserves held to buy cryptocurrencies were brought to the highest level.

Miami Wants To Be a Mining City

In a recent interview, Miami Mayor Suarez suggested that Miami has sufficient resources for Bitcoin mining and that the city could stand out with Bitcoin mining. Among the reasons are that 90% of BTC mining is done outside the USA and Miami has clean energy resources.

Bitcoin is trading at $58,200 this morning, 1% higher than the 3:00 am change. After the news of Visa yesterday, we have come to an important point in BTC, which tested over $58,000. It is seen that buyers have started to move in BTC, which was located on the previous peak, $58,400. Continuous funding rates for futures started to increase. Despite the lack of institutional buyers in research, the weekly fund flow remained at $20.6 million.

When the BTC/USD parity is technically analyzed, the $57,800 level, where the monthly DEMA is located, has not been broken yet. However, rather than this level, the top line of the previous record of $58,400 will be the decision maker for us. Continuing on the bullish channel, the sub-band of the channel passes the support of $53,700-54,000 in BTC. With the recovery seen in the indicators, possible withdrawals in BTC movements are being followed in order to be evaluated in the direction of purchase. The view is horizontal but positive. 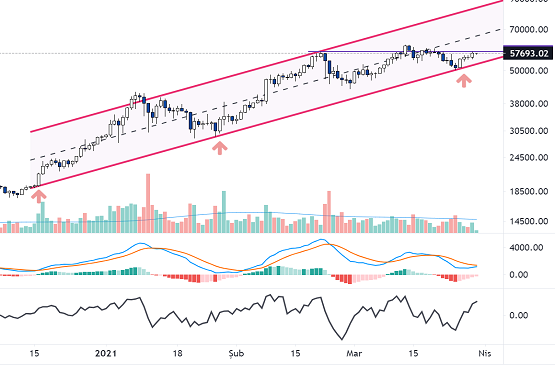 Ethereum continues trading this morning, with some sideways returning back above the $1,800 level. Although the US 10-year rise to 1.75% again threatens risky and non-fixed income assets, cryptocurrency assets continue to attract attention and raise funds in this period. The exit from the SPDR Gold fund and the $5.4 million of the $20.6 million entering into the total crypto into Ethereum also shows that the interest is alive. However, the fact that EIP 1559 will be attacked by miners on the ERC-20 network two days later is reflected in the price. After this date, the presence of the Berlin hardfork in the Ethereum network may be expected to ease the network. Therefore, we may have left many of the tough days behind for Ethereum.

When the ETH/USD parity is technically analyzed, the parity, which has been holding on to the medium-term upward trend that has existed since January, continues the downtrend that has emerged from the record level. However, the target of TOBO, which was formed with the last decline to $1,550 levels, exactly coincides with this secondary descending trend. For this reason, while the $1,890 level is resistance, it also appears as the zone pointed out by TOBO. In ETH, which is moving again, we are also heading for a jam and we know that the movements after the jams are harsh and sudden. In such cases, it is useful to pay attention to the distance of the stop loss levels. 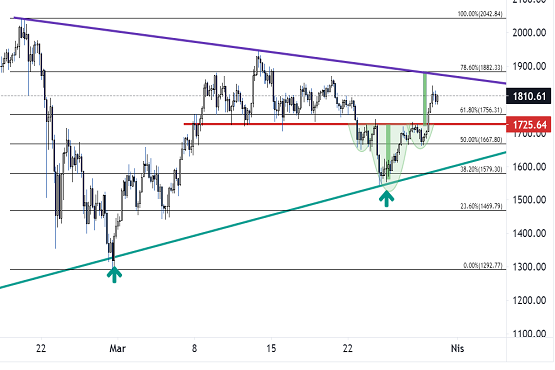 The AVAX/USD parity is up 1.3% this morning, above the $30.00 level. The countdown has begun for the Apricot upgrade, which will be active as of tomorrow. If AVAX's plans proceed as desired, transaction fees for smart contracts on the C-Chain will be halved. This means that AVAX, which plays a very active role on the DeFi side, becomes more attractive for users. Considering the transfers, which are the backbone of the DeFi sector, the congestion of the ERC20 network and the impact on ETH prices, it is understood that if the promises are realized, it is possible to encounter positive pricing on the AVAX side.

When the AVAX/USD parity is technically analyzed, the parity has been following a weak course in the lower zone of the trend for the last week, breaking off from the upward trend it has held since February 28. Although its course is weak, there are bullish reactions. Nevertheless, above the $30.00 level, it will both hold on to its trend and activate the buyer trend psychologically. For this reason, we are looking for candlestick closings and stability above $30.00. Prices in the upper middle zone of the Bollinger band show that the trend tends to be positive. 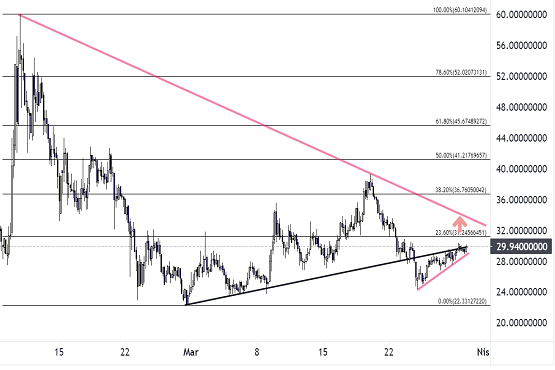 Ripple is pricing around $0.57 this morning, up 1.8% on a daily basis. Another issue on the SEC agenda the previous day was LBC, the token of the LBRY Company. According to the SEC's claims, the company in question violates securities laws and profits from its own coins in favor of the company. Although it is known that this situation will not have any effect on Ripple's side, the SEC's strict stance on this issue does not go unnoticed. At the pre-hearing on April 6, Ripple Labs and SEC will conduct a documentation check by teleconference. Therefore, although Ripple was following a positive trend until April 6, the trial day could be decisive for the direction of a sharp price movement. Ripple has also announced that it bought 40% of the payment company named Trango.

When the XRP/USD parity is technically analyzed, the parity is at $0.57, in the zone where the decreasing trend is passing. When examined in a 2-hour period, it is seen that the candles are generally weak, although they are priced above this level. The $0.55 level in the Fibo'61.80 zone is the first reaction level for the parity. Persistence above $0.55 may pave the way for a backlash extending to $0.57. Then, with the accelerated movement signaled by the triangular compression, $0.59 and $0.64 may come to the agenda. The MACD is giving a positive signal with rising bars and maturity lines intersecting positively in the 4-hour period. 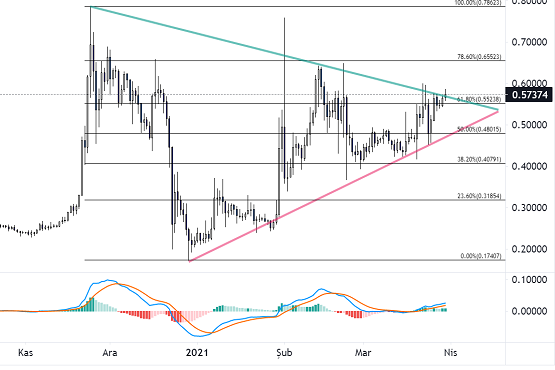 Litecoin is pricing in the $193 zone this morning with a negative price movement of close to 1%. Litecoin, which has a monthly rise of 16%, is 13 points behind BTC, which is 29%. While talking about stablecoin inflows on the BTC side and fund flows on the institutional side, the positive trend is maintained. Litecoin, which is one of the coins with the highest correlation with BTC, wants to approach BTC on the basis of returns, which may contribute to the positive course.

When the LTC/USD parity is technically analyzed, the $182 level, which is the lower band of the bullish channel and acts as a support, has moved the parity to around $197, but there was some retreat. Priced at $192 in the morning, the first support for the parity is the Fibo'38.20 retracement at $189. As it broke the pressure on the momentum and the MACD, they turned towards the buyers again. At the same time, the Bollinger sub-band started to move towards the $185 level, which is the channel bottom. This zone is very strong in terms of support and movements will continue as long as this zone is not reached in possible withdrawals. 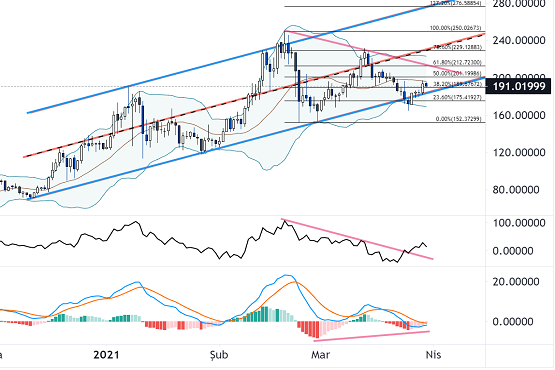 Chainlink is pricing in the $28.00 zone with a horizontal change this morning. LINK, which is the largest ETH consensus token with its market cap, follows Ethereum 15 points behind in monthly returns.

LINK, which provides a monthly return of 13%, can be expected to be inclined to close this gap in April. In a report published by the Chainlink research team a few years ago, it was stated that the next step in the NFT industry is dynamic NFTs. An up-to-date article published on the Nasdaq official website included predictions that Dynamic NFTs will play a major role in the future. Chainlink, which will host dynamic NFTs, may be positively affected by this situation. This shows how well LINK is suitable for long-term retention as a value investment.

When the LINK/USD parity is technically analyzed, the parity priced in the $28.00 zone is between Fibo'38.20 ($27.00) and Fibo'50 ($29.00) levels. These two levels are resistance-support levels that the parity has reacted to or pressured before. For this reason, the parity can be watched towards the upper band of the horizontal channel, $32.00, to get rid of the selling pressures in the resistance break. In the fundamental analysis, when the differences with ETH on the basis of return create a 15% increase, it corresponds to the level of $32.00 again. The course is positive but slow in the minor uptrend. 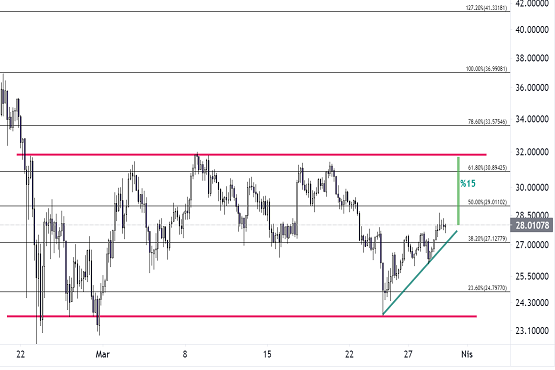 While the increases in the BAT/USD parity continue, we can say that this morning, it is more positive than the market with 2.5%. For BAT, which climbs the price ladder in the form of cap formations, the $1,179 zone coincides with the midpoint of the last correction zone, the Fibo'50 level. This point will be either the complete or the continuation point of the course. It seems that the uptrend is continuing and the outlook is positive. While we have 1.11 lower support, 1.24 is in resistance position. While the outlook is positive, we maintain our positive opinion. 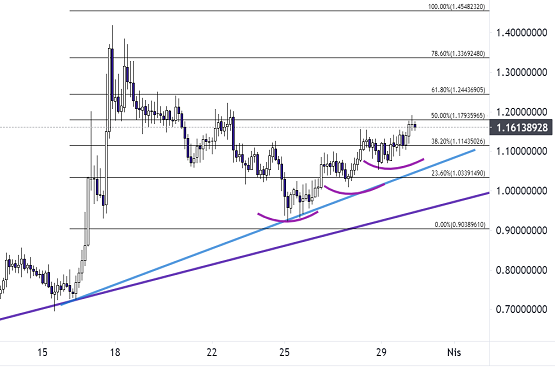