German bank Donner & Reuschel announced that they will not be indifferent to the demand in Germany and will provide cryptocurrency custody services. The bank also stated that they closely follow the blockchain technology and that it has great potential for financial services.

According to data transferred by data analysis platform Materail Indicators, BTC buy orders of $ 100,000 and above in the exchanges reached an all-time high. Thus, it was observed that whale accounts and institutional investors increased their Bitcoin purchases.

The US Government to Sell Bitcoin

The U.S. General Services Administration is putting 0.7501 Bitcoin in an auction. It is not known by which department and how the Bitcoin to be sold was captured.

AVAX Announces Its Goals for the Second Quarter

According to Avalanche's statements, in the second quarter of the year, AVAX will be supported by the world's most downloaded cryptocurrency wallets and will reach tens of millions of new users. On the other hand, Avalanche team stated that AVAX will also strengthen in the corporate market.

Ripple CEO Garlinghouse announced in his statement that Ripple's partnership with MoneyGram is over. When the cooperation in 2019 came to a stalemate following the SEC case, MoneyGram recently took a step back on Ripple.

Ripple's CEO Garlinghouse, who was a guest on a foreign television show, stated that the only country that claims XRP is a security is the United States and that it can move its headquarters to another country if necessary.

Although Bitcoin rose to $ 56,000 levels yesterday evening, its dominance in the general market in the Asian session, called the Asian candle, was on sale. On the other hand, the 3-year bond auction held in the USA yesterday received 3.5 times the demand, and the yield of the 10-year bond fell from 1.60% to 1.54%. The rise in bond yields makes risky market assets unattractive. However, the amount of BTC held in the stock markets reached the lowest level of the last two years, which we can say that reflects both price stability and price expectations. However, the market risk premium of the Grayscale GBTC fund is still lower. Corporate buyer attacks have not yet come. For Bitcoin, whose market size has reached a value of $ 1 trillion alone, this may be a waste of time, but it is still very positive that the market is starting to move to the bull side.

When we consider BTC / USD technically, the flag formation that occurs in the daily period points to the level of $ 80,000. In order to maintain this appearance, it should not exceed the 45 thousand zone. The channel that starts in the $ 43,000 zone is $ 49,800, and our minor uptrend crosses the $ 52,500 level, drawing intermediate supports. For this reason, the outlook is positive and the withdrawals during the day result in the reception reactions from the supports. 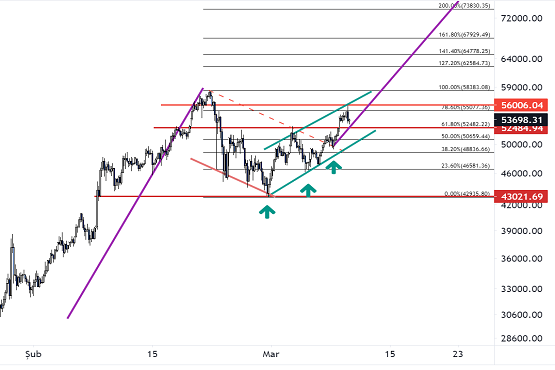 Although Ethereum could not take away its market dominance from Bitcoin, they saw the TOBO target with a much more agile move than BTC due to the scissors movement and tested the $ 1880 level yesterday. It is stated that before the Berlin update, which is expected to be completed on April 14 in Ethereum, the system improvement, called Optimism, will be completed. With the elimination of network density and scaling problem, we think that the Ethereum network will come to the fore again. However, there was a remarkable increase in the number of ETH staking validators in prices that dropped below $ 1400 in the past days. In summary, this region has become the price levels that seem to be cheap for the future, and 3% of the ETH supply is currently locked.

When we consider ETH / USD technically, the TOBO target was seen in the range of $ 1880-1890 and ended. The two uptrends it has created and the transaction volume averages of the last days support the rise. The $ 1755 level, which coincides with the Fibo'61.80 level, and the $ 1650 level where the uptrend has passed, are in support. Although there is a horizontal course for now, the reactions it finds from the supports can be evaluated. The outlook is positive. 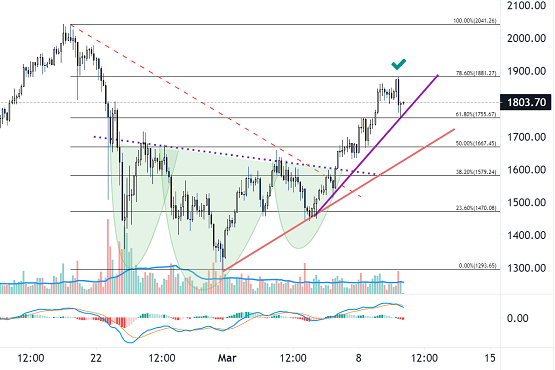 The AVAX / USD pair retreated by 5% this morning, pricing around $ 32.50. Active for sale in many wallets during the unlocking the previous day, AVAXs preferred to be kept in wallets for long-term goals. Mass transfers to stock exchanges and price decline were not observed, on the contrary, AVAX, whose market value increased, increased investor interest and started to rank 21st. On the other hand, AVAX managers shared the goals they set for the first quarter of the year with users the previous day and signaled critical developments such as strong cooperation and network solutions among the targets. Today, the founding team announced that MetaMask, one of the most used wallets, will be accessible with a single click on Avalanche.

AVAX / USD parity made a rapid exit to the $ 31.60 zone after its reaction from the $ 24.80 zone and broke this zone upward in direct proportion to the volume. After the intraday record of $ 35.50, it faced some selling pressure and saw backlash purchases from there, easing into the $ 31.60 zone, which is the Fibo'50 zone. Stability at $ 31.60 and above could bring the next resistance level for the pair, the $ 38.40 zone. 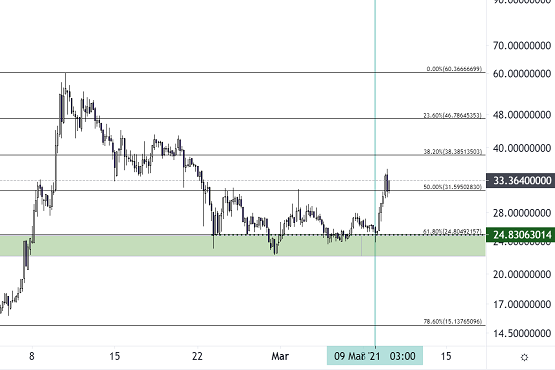 Ripple retraced 3.8% this morning, starting pricing in the $ 0.46 zone. In a television program he attended, the company CEO Garlinghouse hit a bit as he was considered in the real estate class in the USA, despite the opposite in all countries of the world, especially the UK. On the other hand, the majority of XRP investors are located outside of the US, and many countries seeking financial benefits stand out with their positive and enthusiastic statements for Ripple. Garlinghouse stated that in the worst case scenario, they could move out of the US and establish a new order.

When the XRP / USD parity is technically analyzed, the parity continues to move away from the major uptrend and continue to move on a minor uptrend. But the reaction on the trend is still weak, with the involvement and instability around $ 0.45 has made XRP look weak for the past two weeks. In the daily period, pricing remains in the lower zone of the $ 0.50 Bollinger band, but the band wings are squeezed. The $ 0.45 zone where the minor trend crosses also intersects with the former support level. These two situations reflect the readiness of XRP for an accelerated upswing. The Bollinger upper band is at $ 0.61 and the $ 0.50 Bollinger middle band for the pair will be the first target zone if it is exceeded. 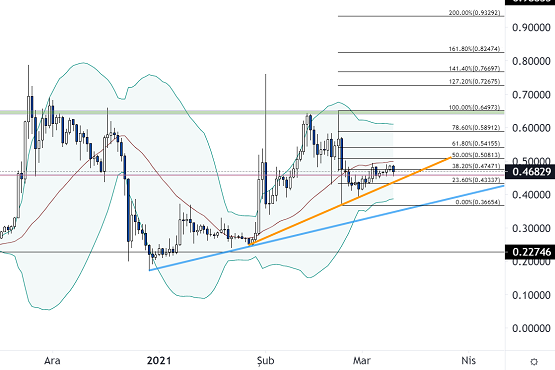 Litecoin is pricing in the $ 198 region with a 2.8% retracement this morning. Last week, Grayscale, one of the largest crypto money investment funds, attracted attention to 170 thousand LTC purchases on a weekly basis. This morning, there was some sale in Grayscale's crypto money assets, while there were 85 entries in Litecoin. Although the amount is low, we see that the trend with buyers continues.

When the LTC / USD parity is technically examined, the pair has made a 3% correction move on a daily basis, although it is positive in the main uptrend. The reaction from the $ 179 support zone led to a test of the $ 204 level in the Fibo'23.60 zone, but this zone serves as strong resistance. There could be a flatness between the intraday support of $ 179 and the resistance of $ 204. If the buyers move upwards, closes at $ 204 and above could start the next major resistance level of $ 246. 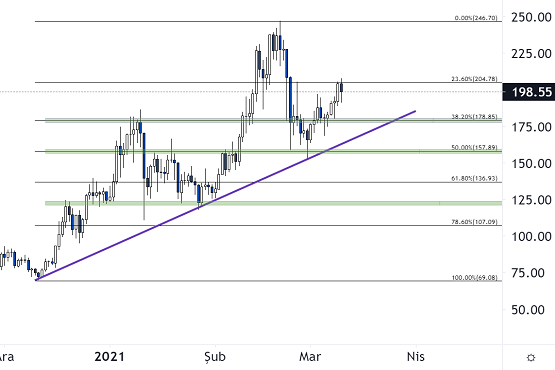 The LINK / USD pair retraces by 4% this morning, pricing around $ 30.35. As we mentioned in our daily bulletin published yesterday, there are record transfer amounts in Chainlink, and we got help from chain data to analyze how this flow will affect LINK. Chain data, which presents the total LINK entries and exits of all exchanges, shows that sharp LINK transfers from exchanges to cold wallets took place during the days when LINK / USD prices were retreating. To explain more numerically, the intense LINK flow from exchanges to cold wallets occurred when LINK prices were pulled to $ 25.00. This shows that those who buy opportunity in the support trigger prices up. But in the $ 30.00 zone, transfers from wallets to exchanges are accelerating, and this selling pressure creates resistance to LINK's pricing above $ 30.00.

When we look at LINK / USD technically, the break of the minor channel upper band ($ 30.00) resulted in a 7% rise to the $ 32.00 region. The pair then faced mild selling pressure and returned to the support point, the upper channel ($ 30.50). The prices, which had been holding on for a while, did not get enough support in terms of volume, and the $ 30.00 circumference, which is the middle band of the minor bullish channel, came to the fore again. If the $ 30.75 level in the Fibo'61.80 tranche is exceeded and supported, the appetite for LINK may increase. 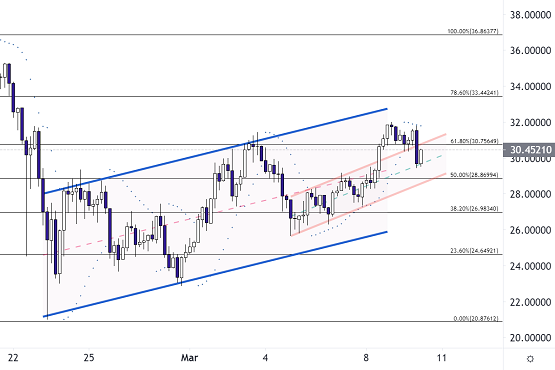 Basic Attention Token is pricing sideways in the $ 0.74 region this morning. The news that the Brave browser made rival improvements to Google supported a strong backlash in BAT pricing, bringing the pair up to the $ 0.87 zone. After the positive pricing of this news, there is a situation of consolidation for the last week, so a slightly more flat course prevails. However, on the basis of the second flag formation and the formation target, prices of $ 1.00 and above may come to the agenda again. The area between $ 0.64-0.80 is in the support position for the pair. The course is horizontal for now. 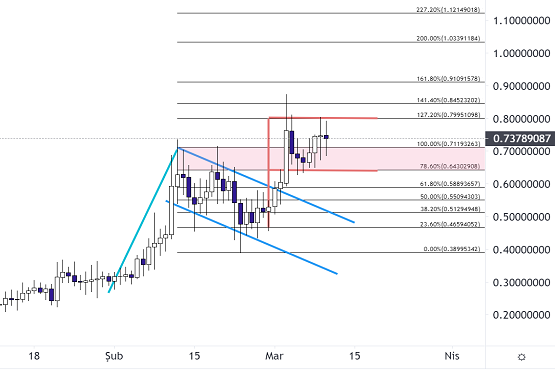