El Salvador President Nayip Bukele stated that he will send a bill to Congress that will make Bitcoin legal at the event held in Miami.

The Texas government signed into law the law establishing the legal framework for crypto investments. According to this law, while defining virtual currencies, it also provides a legal environment for crypto money investments.

The Iranian Minister of Economy stated that new technologies, including blockchain and cryptocurrency mining, contribute greatly to Iranian budget revenues and that the government cannot stand in the way of these technologies.

G7 Central Banks and Finance Ministers stated at their meeting that the opportunities and challenges, as well as the effects of Central Bank Digital Currencies (CBDCs) on monetary and financial stability, are being investigated and they will work together on this issue.

Sina Weibo, the country's native Twitter, has suspended accounts related to cryptocurrencies and DeFi, according to reports from local sources in China.

According to the latest decision taken in South Korea, citizens will pay taxes on crypto assets that they hold on foreign exchanges from next year, if they exceed $ 450 thousand.

Chinese gaming company The9 has announced that it will buy a majority stake to take control of Canadian carbon neutral crypto mining company Montcrypto. The9 plans to invest $6 million for its controlling stake.

The Monetary Authority of Singapore announced that it has collected requests for licenses under the Payment Services Act from more than 300 companies, including Alibaba and Google, to use cryptocurrencies for payments and commerce.

Former Congressman Ron Paul said in his speech that he wanted the use of Bitcoin to be legalized completely like money, and stated that people should decide whether it can compete with the dollar or not.

The cryptocurrency market continues its trading with a sideways outlook this morning. After Bitcoin regressed to the region of 36 thousand dollars, positive news flows began to come. However, we do not see a recovery in price yet. While there was $ 1.2 billion worth of BTC outflows from exchanges last week, 1.2k BTC outflows took place in the last 24 hours. Thus, while BTCs sent to exchanges to be sold to exchanges fell to the lowest level of the last 17 months, the outflows on the exchanges rose to their highest level since November. El Salvador's legalization of BTC and Square's investment in solar energy are also positive news of the main part.

When we consider the BTC/USDT parity technically, the compression seen in BTC with this horizontal course experienced for the last 3 weeks now points to a discount. There has not been a "SAT" signal in DEMAs yet, on the contrary, the 30-day 7-day scissors indicated that the discount has increased as they acted together. While $35,275 is our main support in the four-hour period, 39k must be broken upwards for the upwards to be valid and the trend to be stronger. 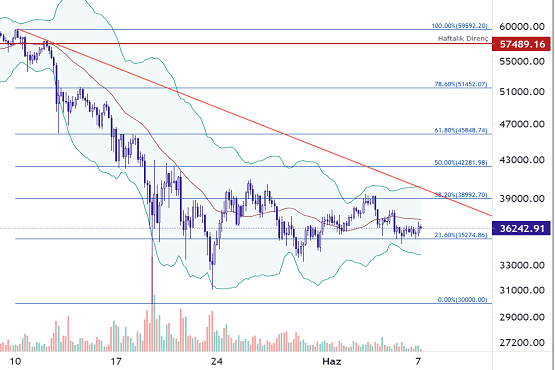 While Ethereum starts the new week with a horizontal course, we see 2% changes in ETH/USDT, as in the rest of the market. Although there is no significant difference in address changes, the on-chain data points to a discount. In addition, the world's leading auction houses also include BTC and ETH among their payment options, while millionaire fund managers are expanding their statements praising BTC and ETH. Last week, $1.8 billion worth of ETH came out of exchanges.

When we consider the ETH/USDT parity technically; For almost the first time in the last two months, the 7-day DEMA crossed the 30-day DEMA in the BUY direction. In this case, there is a movement area within the compression area up to the $2900 level above, with the support at $2750, which coincides with the Fibo'50 level and where the intersection is also experienced in the daily period. Therefore, we can see sharp moves pricing as a result of holding above $2750 and a possible break of $2900 on the upside. 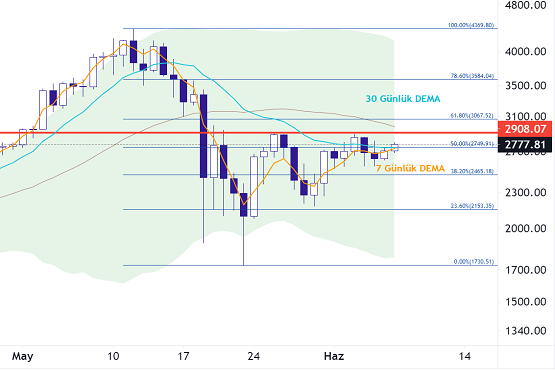 AVAX has gained about 1 percent this morning and is priced at $17.5. When we examine the AVAX/USDT parity technically, as we stated in the bulletin last week, AVAX, which tested its rising trend, broke this trend downwards and found support at $ 17.00. When we examine it in the 4-hour period, we see that the stochastic turned from the important resistance level and gave a weak sell signal at the 30s. The RSI is above the support level at 41.50. If there is a 4-hour close below the $17.00 level, we expect it to find support at $15.60. As long as this support level is maintained, we expect price movements towards the $19.5 level, which is the Fibo'23.60 tranche. 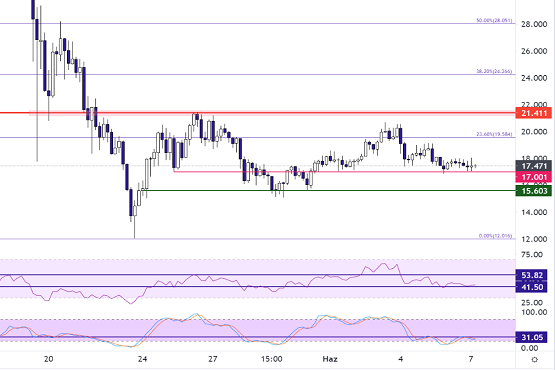 XRP, which has risen by 1.33 percent in the morning hours, is priced at $ 0.95. Recently, the lawyers of Ripple founders Brad Garlinghouse and Chris Larsen filed a defense in the court. In this defense, the lawyers of both parties responded to the allegations that the XRP sales were manipulated by the Ripple founders, stating that these accusations made without any evidence do not reflect the truth. In addition, there was another development in the Ripple case over the weekend, and it was stated that the documents showing why the BTC, ETH and XRP were different, which were ordered to be submitted to the court earlier by Judge Netburn, did not want to be provided by the SEC. This situation is negative for the SEC because it suggests that it does not have enough documents to strengthen its claim. For Ripple, the litigation process is progressing positively and if the SEC insists on not submitting the documents, this may even lead to the dismissal of the case.

When we examine the XRP/USDT parity technically, even though it closed daily below the $0.9375 support level on Saturday, it closed above this level on Sunday with the reactions it found here. When we examine XRP, which is priced above the rising minor trend that has formed since the low level of May 23, in a one-day period, the 14-day DEMA at $ 0.9180 turned into support. If XRP, which is at the support level of $ 0.9375, maintains this support level, we expect it to retest the resistance level at $ 1.10. 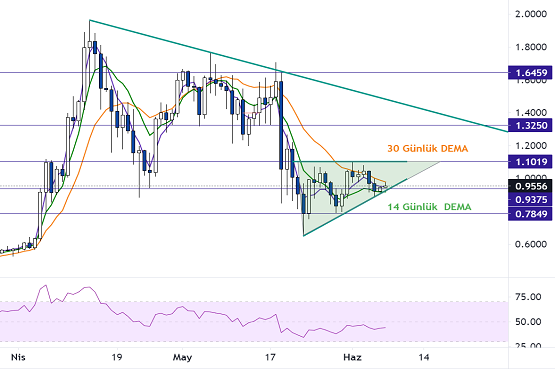 LTC has gained about 2 percent this morning and is priced at $180.00. Grayscale premium is at 1654 percent, although slightly lower. This parameter, which shows that the fund performance of this LTC continues to outperform the spot performance, indicates that LTC will be a good option when the market-wide upward movements begin. In addition, transaction fees and MVRV Z Score on chain analyzes also move into the green zone, indicating that the price is oversold.

When we look at LTC/USDT technically, LTC, which tested the secondary descending trend that had been tested yesterday on May 10 at the same time, which has existed since the record level of $ 420, has broken this trend again today. LTC, which is dominated by price movements stuck in the $190-170 band, is priced in this band. When we examine it in the 4-hour period, LTC, which broke the resistance level at $177.8, which coincides with the Bollinger middle band and the falling secondary trend level, on the upside, and if it can protect this level, we expect it to move towards $190, which is the Fibo'38.20 slice. 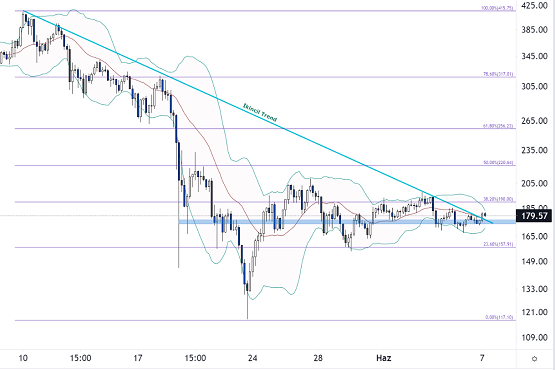 LINK has gained about 2 percent this morning and is priced at $28.00. When we examine the chain data, there are slight recoveries in new and balance addresses. The number of addresses with a balance greater than 0 reached its new high. Although our long-term upward expectation for LINK, which has positive project-based news flows, continues, it is useful to follow the flagship of the market, BTC, for short-term price movements.

When we look at the LINK/USDT parity technically, LINK, which broke the minor descending trend that has existed since May 18, last week, is holding on to this trend even though it has regressed. When we examined it in the 4-hour period, the reactions it saw at $ 32.60, which is the upper Bollinger band from June 3, retreated. LINK found support in the $ 26-27 band around the Fibo'38.20 slice. Testing the Bollinger lower band at $26.30 on June 5, LINK is currently below the Bollinger middle band at $28.14. If this level is broken and a 4-hour close is reached, we expect to see price movements towards the $29.50-30 band where the Bollinger upper band is located. In the worst scenario, if the flagship BTC sells, pullbacks towards $26 levels can be seen in LINK. 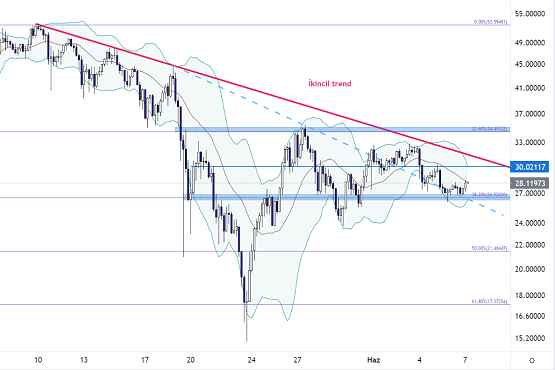 BAT is priced at $0.77, gaining about 3.5 percent this morning. When we look at the BAT/USDT parity technically, BAT, which broke the rising minor trend that started on May 23 downwards over the weekend, moves horizontally after the breakout. We can see that the $0.7356 level, which is the Fibo'38.20 tranche, has been acting as support since May 31. When we examined it in the 4-hour period, the stochastic crossed in the direction of buy and broke above the resistance level of the RSI. Priced just below its downtrend that started on May 7, BAT is testing this trend for the 5th time. If the important support level Fibo'38.20 is not broken to the downside, we expect this trend to be broken with the new week. Our first target after the downtrend breakout is the resistance level at $0.85. 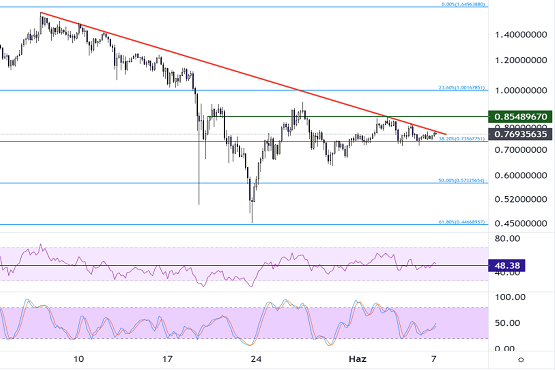