Elon Musk and Jack Dorsey Will Meet at the Event

Elon Musk, CEO of Tesla, and Jack Dorsey, CEO of Twitter, will discuss the issue together at the event in July, which aims to show institutional investors how they can adopt BTC.

ETH transaction fees, which approached almost $ 70 last May, fell to $ 2 according to the latest chain data, reaching the lowest level since December 2020.

The Palestinian Monetary Authority has announced that it has launched two studies on the feasibility of a Palestinian digital currency.

In Tanzania, after the country's president's positive comments on cryptocurrencies, the Tanzania Central Bank began preparations to lift the cryptocurrency ban that has been in place since November 2019.

Eric Rosengren, Chairman of the US Boston Federal Reserve Bank, described Tether (USDT) as a risk to the stability of the financial system.

The newly announced Crypto Climate Agreement (CCA) aims to switch all blockchains to renewable energy before 2030 and eliminate carbon emissions by 2040.

No CBDC in Switzerland's Plans

According to a report in Switzerland, the Swiss National Bank (SNB) does not plan to offer a central bank digital currency (CBDC).

Bitcoin, which fell 0.55 percent in the morning hours, is priced at $.34,528. The hash rates for Bitcoin, which closed the week above 30 thousand dollars after the volatility in the price with the options that expired at the weekend, decreased during the transport of mining activities in China, while the change in the hash rate in the last 24 hours was -18.73%. In addition, there has been a decrease of over 15% in active and new addresses in the last 24 hours. We see that there is a decrease in investor interest with the activity in the market over the weekend.

When we consider the BTC/USDT parity technically, we see that the weekly DEMA cuts the two-week DEMA upwards and creates a buy signal. For BTC, which has been moving upwards in the secondary descending trend that has been continuing since May 10, $34,823 levels, which coincide with the correction level of Fibo'23.60, will be the resistance. If this resistance can be broken to the upside, we expect it to break the secondary downtrend ($35,500-$35,700) that has been continuing since May 10, in order to talk about a permanent uptrend. In the possible pullbacks in the market, the first support level will be the weekly DEMA, which corresponds to the $ 33,580 levels. 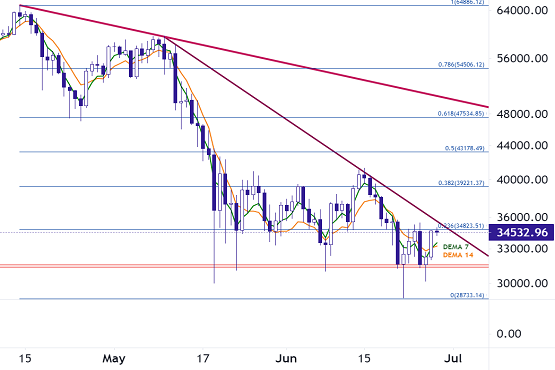 Ethereum is priced at $ 1982 levels with an increase of 1 percent in the morning hours. With the withdrawals in the market, Ethereum transaction fees have reached the lowest level of the last 6 months and have been withdrawn to about $ 2.15, which shows that the transaction volumes in Ethereum have decreased considerably.

When we look at the ETH/USDT parity technically, we see that Ethereum is holding on to the major trend that has been going on since March 2020 and starts the week above the weekly DEMA level ($ 1893). One of the important resistance levels is the 1998 $ levels, which coincides with the monthly DEMA, if this level can be broken to the upside, we expect the price to move towards the $ 2079 levels. However, if the monthly DEMA at 1998 $ levels cannot be broken to the upside, 1891 $ levels corresponding to the weekly average will be supported. While there is uncertainty about the direction in the market, buying near support and selling near resistance will be a healthier strategy. 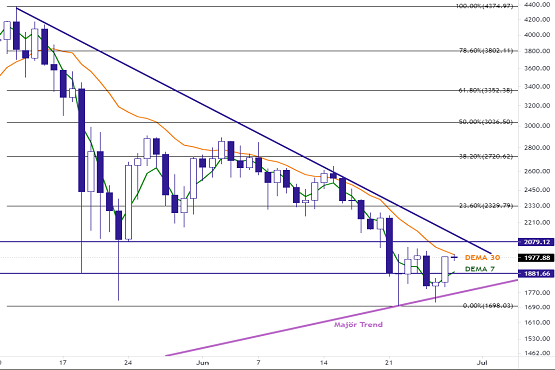 AVAX is priced at $10.90 with horizontal price movement in the morning. Although it fell below the support zone at $10.67 at the weekend, it made the daily close above this level with the rapid upward price movement last night. AVAX, which is priced below the existing downtrend as of May 20, can continue its upward movement if it can sustain above the $10.67 level. The downtrend and the 2-week average, the $12.2-12.4 level, which coincides with the resistance level, are read as the next important resistance level. Considering the horizontal market conditions, buying opportunities close to $10.67 and selling opportunities close to the $12.2 resistance levels are considered as suitable strategies. 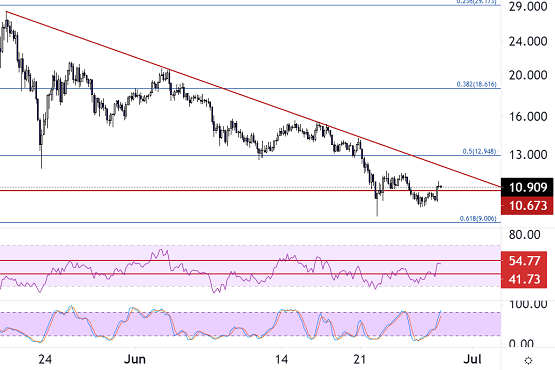 Ripple, which fell by 1 percent in the morning hours, is priced at $ 0.64. In the case, the SEC's objection to the taking of a former corporate finance employee's statement was raised, but the judge has not yet made a statement regarding this. While there is no new development in the case, Ripple will write a counter letter to the letter, which offers the reasons for not taking the statement of the former SEC employee by the SEC, on July 1st.

When we consider the XRP/USDT parity technically, the weekly DEMA in XRP, which opened daily above the monthly average, created a buy signal by cutting the two-week DEMA upwards. However, in order to talk about a permanent rise in XRP, it will be very critical for the price to hold on to the monthly DEMA and to break the $0.67-0.68 levels, which coincides with the secondary descending trend that has continued since May 18. In case of a price action below the monthly DEMA, the support levels will be $0.615 and $0.602, respectively. 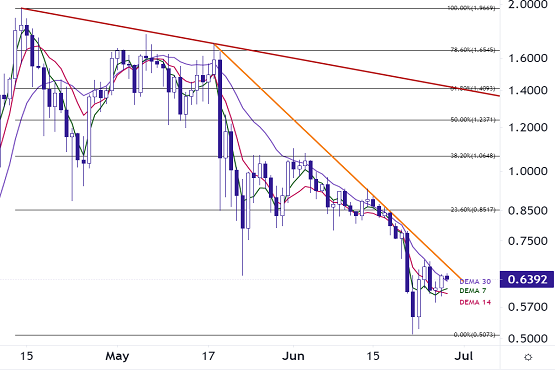 Litecoin, which fell by 1 percent in the morning hours, is priced at $ 131.26. When we examine the chain data, we do not see a recovery in the number of new addresses for Litecoin, although there is an increase in the number of active addresses. assessable.

When we look at the LTC/USDT parity technically, it is a permanent upward movement for LTC, which started the day above the support at $ 129.15, to break the descending trend upwards, in other words, to break the levels of $ 134.50-135.00 upwards and to remain at these levels. will be very critical. If this downtrend, which has been going on since May 10, is not broken, $129.15 and $126.85, which corresponds to the weekly DEMA, will be support, respectively. Although the MACD is a buying signal, it may be healthier for LTC, which is very close to the levels where the descending trend coincides, to wait for the downtrend to break upwards or to pull back towards the support levels. 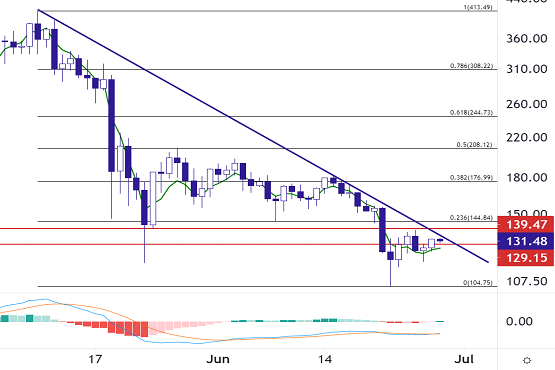 LINK, which fell by 1 percent in the morning hours, is priced at $ 18.20. When we technically consider the LINK/USDT parity, which tested $15.50 at the weekend with the decline in the market, we see that the weekly DEMA cuts the two-week DEMA upwards and is close to the monthly DEMA. The most important support level for LINK, which is at $ 18.20 levels, will be the price band with weekly and monthly averages corresponding to $ 17.42-17.51. If it persists above the B support levels, the first resistance levels for LINK, which we expect to continue its downward trend since May 10, will be the $19.45-19.50 band. The MACD has formed a buy signal. A short-term buy-sell strategy may be more appropriate considering support and resistance. 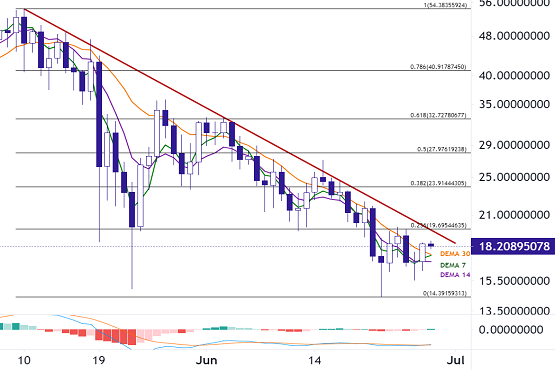 BAT is priced at $0.53, depreciating by about 1.65% this morning. BAT, which was priced below the major downtrend that has existed since May 27, was priced below the $0.539 level over the weekend. BAT, which closed the weekly close above the $ 0.539 level with the purchases made last night, gives a buy MACD signal in the daily period. It is important to maintain the level of $ 0.539 for the continuity of the upward movements. The $0.60 level, which coincides with the downtrend and the Bollinger middle band, is an important short-term resistance level. There could be a rise towards the $0.60 level for BAT. 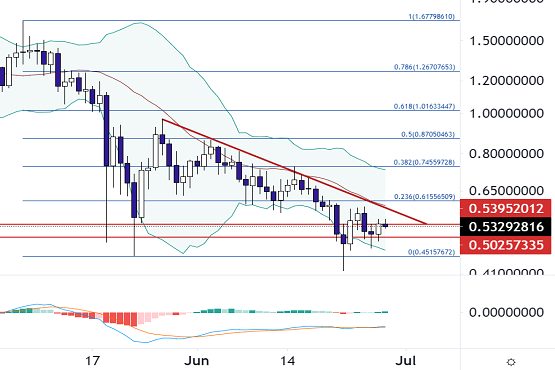