The CEO of the electric car company, Elon Musk has announced that Tesla cars can now be purchased with Bitcoin. Musk has also stated that the payments made with BTC will be kept without being converted into fiat currency.

German Credit Agency’s monthly market survey carried out between March 18 and 22 with 520 market professionals around the World has revealed that Deutsche Bank's investor customers expect Bitcoin to be priced between $ 20,000 and $ 40,000 this year.

US Investment Bank Goldman Sachs has applied to the US Securities and Exchange Commission for an exchange traded fund covering Bitcoin and other cryptocurrencies. The management giant Fidelity Investments of $ 5 trillion asset has also applied to the SEC for an ETF.

Wallet analyst WhaleAlert shared that two transactions took place on Ripple's XRP Ledger in half a day with a movement of a total of 746 million XRP. The transactions of over $400 million were negatively viewed by Ripple investors.

The research carried out by the cryptanalysis company Santiment has shown that Bitcoin whales bought BTC when it fell below $ 60,000. The company reveals that whale accounts holding between 100 and 1000 Bitcoins have been continuing to accumulate Bitcoins between February 1 and March 21.

The Ministry of Treasury and Finance announced the dates for the Economic Reforms Action Plan in its post on social media. According to the report, the Central Bank will establish the economic, technological and legal infrastructure of digital currencies until December 31, and a new law will be enacted on the relevant issue.

Cryptocurrency markets fell sharply yesterday with the lead of Bitcoin. Bitcoin was priced at $53 thousand before the Tesla news, its increase to the 57 thousand zone with the effect of the news and the subsequent sharp decline to the 52 thousand zone caused panic, but the news and on-chain data do not confirm that this decline may be permanent. While Fidelity and Goldman Sachs ranked in the top ten in terms of asset sizes, they applied to the SEC to issue the Bitcoin ETF. In on-chain data, there was a serious increase in the amount of BTC leaving the exchanges. Except for exits from some Asian miner pools, we cannot see any miner sales in the pool information. Therefore, the foundation currently supports Bitcoin prices from below.

When the BTC/USD parity is technically analyzed, we stay in the lower-middle part of the fans while the gann fans sit on the dips and the hills due to the parabolic movements experienced. While there are resistances of $53,200 and $56,000 in BTC, which holds the 50% slice and reacts from here, the minor descending trend continues. In order to break this trend, the 58 thousand level must be broken upwards. For now, the formation of technical adhesion in BTC, which has horizontal movements, offers transaction opportunities for investors who evaluate the support zones. 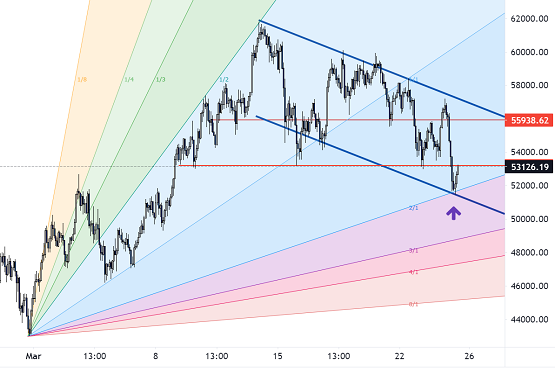 After yesterday's sharp drops Ethereum is trading slightly sideways at $1.590 this morning. Ethereum had weak metrics before the miners' attack on the ERC20 network on April 1. However, there is an increase in the funding rate in ETH futures in the $1,500 zone where it was withdrawn. This indicates that buyers are coming to the market in the current price zone. Although the stagnation in ETH is quite normal until April 1, considering the demand from the price levels reached, the stagnation seems to be disrupted by the upward movement.

When the ETH/USD parity is technically analyzed, OBO and reverse flag formations completed their targets. Thus, the upward trend that has existed since the beginning of 2021 was once again tested. Testing its medium-term trend has been important for a healthy price flow. The fact that there is no other formation that stands out for now has relieved the graph technically. In the reactions that have occurred, the $1,730 level is at the resistance position. 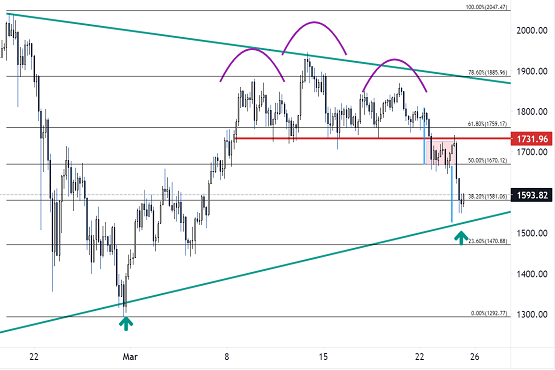 Although the AVAX/USD parity is rising by 3% this morning, there is a 10% retreat in the parity in the 24-hour period. The cryptocurrency market, which has a 60% Bitcoin domination, has therefore also been effective in the AVAX/USD parity, creating a negative price movement for AVAX in this correction. We saw a rapid retracement as the downward break of the $28.00 uptrend pushed the parity behind its critical support. The reaction was quick, though, and the parity, which tested the $24.50 zone, recovered most of its losses within hours. The $24.00 zone is the main support zone and there is no significant resistance level up to $31.20 in the Fibo'23.60 zone. For this reason, the horizontality between these levels can be evaluated for investors. Our bullish expectations will increase for the parity that can hold its trend at $28.00 and above. 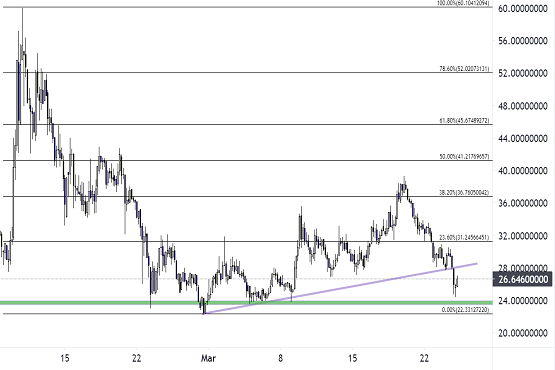 Ripple was one of the companies that faced investor backlash yesterday due to the heavy XRP sales made in a 24-hour period. Ripple, for which the SEC was a plaintiff for the purposes of use, not the existence of XRP, continued to accelerate sales by transferring XRP to the market, despite the claims presented and the critical situation it was in. The sale of $400 million XRP in a few hours has therefore increased selling pressures, with Bitcoin and other cryptocurrencies already leaving behind a negative day. However, we know that Ripple's founders have had the same strategy since the time of XRP's production, and the market grew in the direction of buying by digesting news pricing at some point.

When the XRP/USD parity is technically analyzed, we interpreted the technical analysis in the daily period, the peak levels weakened after the record of $0.78 on November 24, causing a major downtrend. On the other hand, we see that the lows that have recovered as of February are accompanied by the parity. This squeeze image may cause accelerated increases in pricing that finds strong support, as well as unexpected declines. However, we can talk about a possible upward movement that will start in the $0.70 zone with the triggering buying appetite after the breakdown level placed in the $0.56 zone. 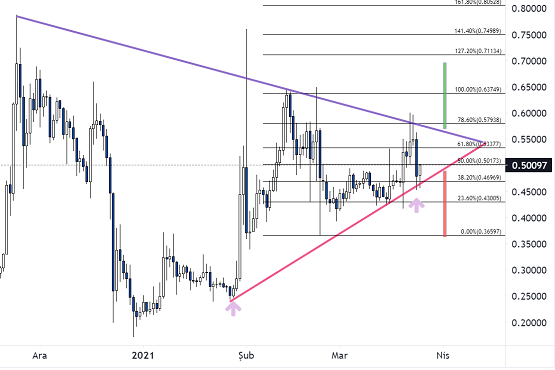 Litecoin is pricing in the $176 zone this morning, with a horizontal change. In the last weeks we have left behind, we see that the parity has not been constantly effective on the buying appetite in the upward trend, but it has lost value in a correlation with the correction movements in the market. This shows that although investors who already own Litecoin tend to sell whenever a drop is anticipated, new buyers entering the market do not find Litecoin attractive enough.

When the LTC/USD parity is technically analyzed, although the parity experienced a steady rise to the $196 level the previous day, the $196 level in the Bollinger mid-band acted as resistance, putting pressure on prices. The lower band of the bullish channel at $178 and the $175 in the Fibo'23.60 slice have become the support zone, and the parity is currently being read to react from this zone. However, the downtrend in the MACD and Momentum indicators is not over, the peaks are still getting weaker. For this reason, voluminous increases are expected from the reaction zones in order to start an upward movement. 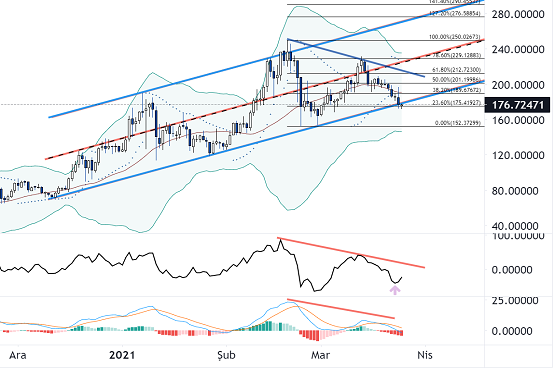 Chainlink is up 2% this morning, pricing at $25.40.The negative prices that occurred the previous day and caused sharp drops in Bitcoin and Ethereum were also effective on the LINK side. For this reason, the $25.40 level gave their monthly returns back. On the Grayscale side, we see 1500 LINK contracts in 24-hour change and we read it positively.

When the LINK/USD parity is technically analyzed, although the $27.50 level is held in the major uptrend, candle closes below this level increased selling pressure, pushing the parity to $24.50 levels. The main support is located here at $24.80. Thus, $24.80, which has become the reaction zone for LINK/USD, is also an important part of Fibonacci's 23.60. Oscillators tend to recover from lows on the hourly chart. 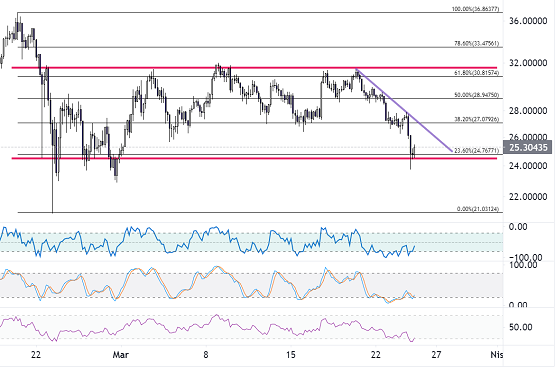 Although Basic Attention Token is up 1% this morning, it has lost 8% in the 24-hour period. For the BAT/USD parity, which we recorded at $1.00 in the morning, the $0.95 support in the Fibo'61.80 zone became the main reaction zone and the parity started to generate positive pricing even though the parity was weak. BAT is 30% away from the $1.40 record. Although it gets stronger in the micro part of its project, it continues its weak and downward position by not bringing the break of the flag formation due to the general state of the market. This, in turn, can be seen as an opportunity for investors and bring rapid recovery for BAT, which is included in the Grayscale fund and gains institutional confidence. With the upward break of the $1.02 channel mid-band, pricing may gain strength. Then, breaking the $1.08 Fibonacci retracement resistance could ease prices and bring the $1.20 zone, which is the upper channel, back to the agenda. If $0.94 is the main support zone, the outlook is positive. 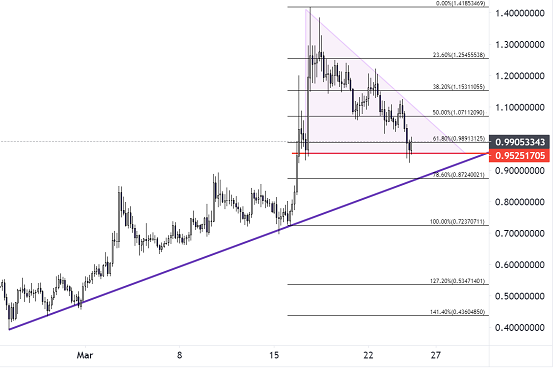