Tesla's billionaire CEO Musk attracted attention with his surprising response to DOGE owners via Twitter. In his post, Musk stated that if the Dogecoin owner large accounts sell their DOGE assets, he will support cryptocurrency by paying real money.

Hester Peirce, member of the US Securities and Exchange Commission (SEC); Tesla stated that the interest of large companies like Mastercard in cryptocurrencies indicates that the market needs crypto regulations. While Peirce looked very favorably on crypto assets, he argued that there should be clear rules that allow this market to thrive without the risk of breaking the law.

Searches for "what is cryptocurrency" and "cryptocurrency market" made on Google broke the all-time record and the search record for 2017 was surpassed. So Google Trends data, was one of the best indicators of the growing interest in the crypto-currency in Turkey.

NFTs Can Be Produced on Ripple Labs

XRP Labs team announced that XRP Ledger can host many different tokens, including NFT. Ripple has previously announced that the platform is also suitable for Central Banks' digital currencies. Now, it is working to realize Ripple Ledger-based productions instead of Ethereum-based NFTs.

Demand for Bitcoin Mining Is Rising
Intense mining activities following the Bitcoin records are also increasing the interest of new miners in the market. CEO of Canaan, one of the largest mining companies in the world, stated that after the news of Elon Musk, corporate companies also started mining. The demand for mining equipment is higher than ever.

Billionaire Mark Cuban, owner of the Dallas Mavericks, stated in an interview that countries can sell a certain percentage of their gold reserves and buy BTC and ETH instead. On the other hand, Cuban emphasized that Ethereum is more advantageous than Bitcoin and emphasized that Ethereum's existing smart contracts pose a huge threat to banks.

While Bitcoin is testing $ 50,000 this morning, the volume is below the usual average during Asian hours due to the Chinese New Year holiday. We are constantly talking about Ethereum's average transaction fees, but Bitcoin's average transaction fees have begun to surpass Ethereum. While the increase in transaction fees on the $ 50,000 journey and its volume being below the 30-day average do not give strong signals for the strength of the trend, the instability over BTC and ETH in the market has also been reflected in the institutions. Grayscale has not received any funds in the past 24 hours.

When we consider the BTC / USD technically, the wedge formation that rises with the approval of the MACD and momentum in the upward trend in a four-hour period appears. While the $ 50,000 level is the top of the wedge, the $ 47,350 wedge support in the withdrawals and the upward trend that has existed since the end of January in the event of a break above the $ 44,500 level. For this reason, there will be a situation where corrections or supports will be more prominent, but not the downtrend, but the possible corrections will be followed with the rising trend. The image is horizontal and slightly downward sloping. 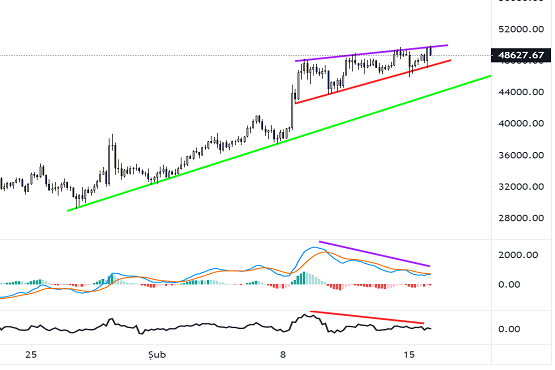 Ethereum is pricing just above the $ 1800 level, up close to 2% this morning. While high network charges continue to be in question in Ethereum, PoS (Proof of Stake) coins may come to the fore again. The fact that there is no significant change in the number of new and active addresses does not show that the market is growing with volume or participation. This is why we do not see prices gathering strength or preparing for a solid uptrend. For this reason, daily trading is more important now.

When we consider ETH / USD technically; The wedge formation formed within the bullish channel was broken down. In this break, a retreat to the channel middle band was seen. There is still a weaker MACD. For this reason, the 1720 $ level of the channel middle band should be followed carefully and if the upper resistance band cannot be broken, the supports should be followed for the return. Although the network fees of Ethereum, which is on the rise, prevent the technical view, supports can give new buying opportunities. 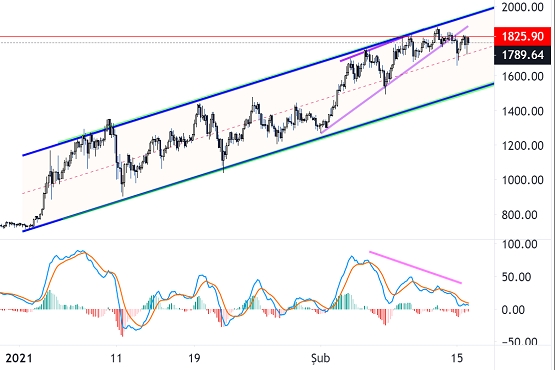 The AVAX / USD pair is pricing at $ 37.70 this morning with a horizontal change. The high returns that AVAX experienced in the short term and thus its rapid increase in popularity enabled it to be listed on many exchanges and meet many new investors. Thanks to this, AVAX, whose depth and volume has increased, is strong both in the macro part and on the basis of quantitative indicators in the medium-long term, but the corrections and profit realizations in the short term are quite normal. Ethereum network fees continue to rise, and it is inevitable that this will again create opportunities for faster and lower-cost coins such as AVAX, Algorand and Stellar.

The pair, which broke the channel mid-band level of $ 38.00 upwards the previous day, tested the $ 43.20 channel upper band with more than one price candle, but could not get rid of selling pressures and retreated and experienced a horizontal movement in the upper zone of the channel. Prices are above the Fibo'50 critical level and if this level becomes the support level, there is a 7% daily return potential towards the upper band of the channel. For prices to strengthen again, it can be expected that the upper band of the $ 40.00 channel will be exceeded together with the volume, and candlesticks will occur above this zone. Above $ 40, the first resistance is at the $ 43.00 level and the initial support is at $ 35.00. 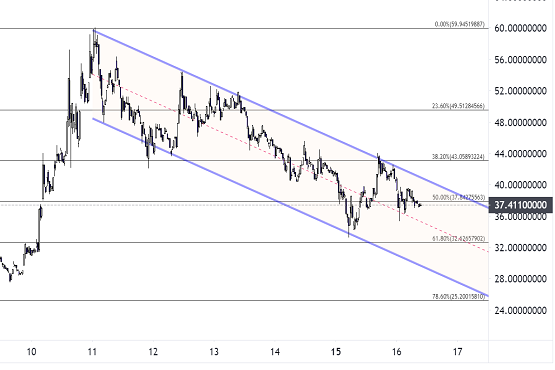 Ripple is priced at just over $ 0.5600, with a daily increase of around 2% days before the case with the SEC (February 22). NFTs produced on the Ethereum network are becoming increasingly popular and are becoming an icon combining art and technology. On the other hand, Ripple Labs announced that it is working to enable NFTs to be produced on its own network. Many similar project developments on the Ripple side ensure that XRP is priced positively accordingly.

When the XRP / USD parity is analyzed technically, the upward trend that started in the last days of January and was created by the easing of sales pressures is preserved. The upside reactions on this trend allow XRP to recover gradually. The formed triangle formation started to signal towards its target of $ 0.7000 after breaking up the $ 0.4970 level. The retreats up to the $ 0.5000 level have become a reaction zone as this level meets prices above the trend. Initial resistance is located at $ 0.5850, with support levels to be followed above the trend. 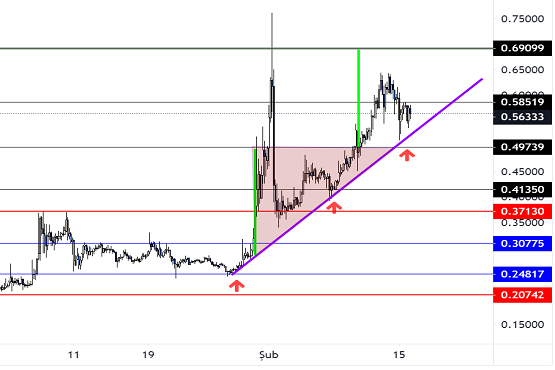 Litecoin is pricing at $ 213 this morning, up 2.4%. It provided a positive return of close to 50% in monthly returns and was also a pioneer for Bitcoin, which yielded relatively less returns in a month. The record BTC brought at $ 50,000 today in the morning hours signaled the closing of the BTC-LTC shear in favor of LTC.

The LTC / USD parity creates a squeezing appearance with descending peaks and recovering bottoms in the technical view (hourly period). In the daily period, the outlook is more positive, but the 20% drop after the $ 230 record caused the upward momentum to decline. Price candles, which can be observed better in hourly and 4-hour periods and are in contraction, signal that an accelerated movement may take place by approaching the tightening zone. An upward break of the $ 216 zone could start this move upward. Movements between $ 205 - $ 220 will be followed during the day. 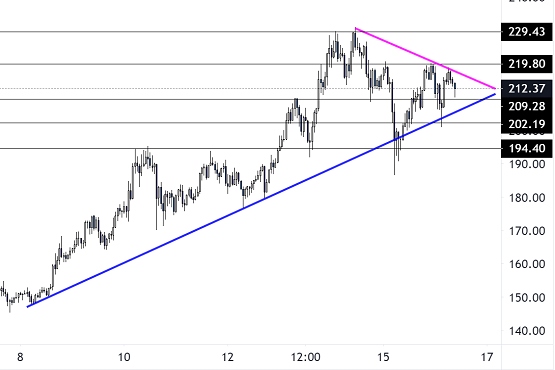 Chainlink is pricing around $ 31.80 with a 2.4% retracement this morning. LINK has kept its uptrend, although the market has been in a more negative mood on the altcoins side in the last few days. The bulls managed to push the price up again, even though it fell to the $ 27 band after the record of $ 35.70. Looking at the on chain data, it is seen that the number of successful transfers made by LINK has dropped to the lowest level of the last month. This shows how suitable LINK, which we call "stability coin", for long-term investments for investors.

When the LINK / USD parity is examined technically, the holdings in the $ 32.30 band draw attention. For now, there are slow and weak moves, although prices have accelerated above the $ 30.00 support. A double top view is formed, where the $ 30.85 level will be the neckline. However, it is important to break down $ 30.85 and thus get a confirmation. In the 4-hour period, the maturity lines peaks in the MACD appear to fall and give a weak signal. Parabolic SAR, on the other hand, is positioned in a falling position above the prices. 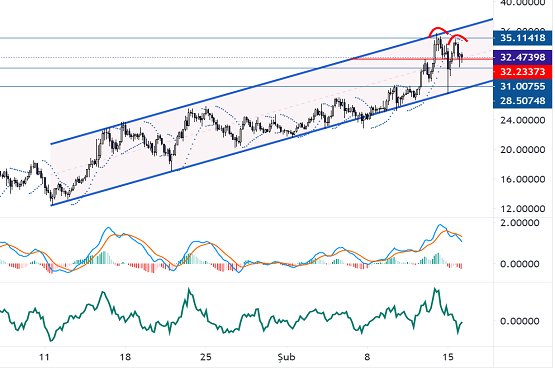 BAT / USD is trading above 5.5% this morning. With Grayscale's launch of a BAT fund, BAT, which attracted all the attention, tested our $ 0.70 target and found the profit sales to be quite normal, but the $ 0.50 levels became support. The parabolic and linear trend created within the long-term outlook clearly shows that there is strong potential for Basic Attention Token. For now, it is changing between the $ 0.51 and $ 0.58 in the ups. If the $ 0.58 level fails to break, we are seeing rebounds from the supports as pullbacks will coincide with the uptrend again. The outlook is bullish. 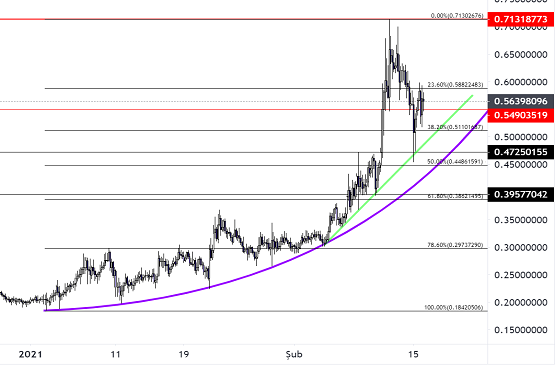