Elon Musk, the richest man in the world, wrote "Bitcoin" in the statement part of his Twitter account after his tweets about stocks, and the price of BTC increased from 32 thousand dollars to 37 thousand dollars in minutes. In addition, Musk, in the last tweet he shared, "In retrospect, this is inevitable." gave his statement.

Record USDT Entry To Exchanges
After Bitcoin, which became active after Elon Musk's move, a large amount of Tether entered the stock markets within 1 hour. The USDT entry worth $ 330 million is an indicator of the buying appetite for the cryptocurrency market.

Visa Can Run Cryptocurrencies On Its Own Network

The CEO of San Francisco-based payment giant Visa said in a statement that he sees Bitcoin and other cryptocurrencies as "digital gold". In the next step, he stated that they can use Bitcoin as one of the payment methods along with 160 other fiat currencies.

As the interest in bitcoin and cryptocurrencies increases, more and more people are turning to invest. For this reason, cryptocurreny exchanges are also very popular because they are the most preferred platforms to buy and sell cryptocurrency

The giant business intelligence company MicroStrategy signaled that it could buy BTC again in its fourth quarter report. The company, which has a total of 70 thousand 784 Bitcoin assets, stated that they want to keep their Bitcoins and invest more Bitcoin in the future. Announcing that it is developing new strategies to buy Bitcoin, MicroStrategy's conference on February 3-4 is eagerly awaited.

Bitcoin entered the top 10 again in the list where assets are listed according to market volume. Thus, it surpassed the eleventh place Taiwan Semiconductor. After its rapid rise of 5 thousand dollars, it increased its dominance from 62.6% in the morning hours to 64.2% and the market volume increased to the level of 685 trillion dollars.

Ripple has compiled a detailed report that disproves all the reasons the SEC used to judge XRP as a security. Then XRP prices saw an increase of over 60%. Although the main reason for this increase is not known yet, the trade volume of XRP has increased from $ 4 billion to $ 12 billion in a very short time. In Turkey "Ripple" and "XRP" On January 30 the volume of searches for words broke the record of seven days.

Ripple Stands Out With New Deals

Francisco-based blockchain company Ripple has invested in MoneyTap, a subsidiary of Japanese financial giant SBI Holdings. The MoneyTap app, powered by the RippleNet network, is expected to connect to 20 banking institutions by the end of 2021. By the end of February, three more banks are expected to come into play.

Bitcoin is priced around $ 33,800 on the first day of the new week. Last week, the positions opened against hedge funds with the organization of the Gamestock share in the forums in the USA and this revolt movement was also reflected in crypto currencies, and on the same day, Bitcoin rose above $ 38,000. For the future, BTC's dominance continues to lag behind 63%. There is no significant increase in the number of new and active addresses. However, there is an increase in the amount of BTC withdrawn from the stock markets. Does this situation set new records? Weak possibility but may support intraday movements into the $ 38,000 zone. BTC's daily volatility has increased to 3.5%. Therefore, when determining take profit and stop loss levels, daily and 30-day volatility should be considered.

When we consider BTC / USD technically, the fact that it has been priced behind the 30-day moving average in the last two weeks does not present a strong view. In order for the purchases to strengthen, the average level of $ 35,000 must be broken. On the other hand, the MACD and momentum indicators also give negative mismatch in the 4-hour period, with the $ 31,500 level as sub-support. For this reason, it is useful to pay attention to buying from high levels while there is negative mismatch and below the average in Bitcoin. The view is horizontal. However, with the outlook that finds support, we keep our view of being positive in Bitcoin and evaluating pullbacks. 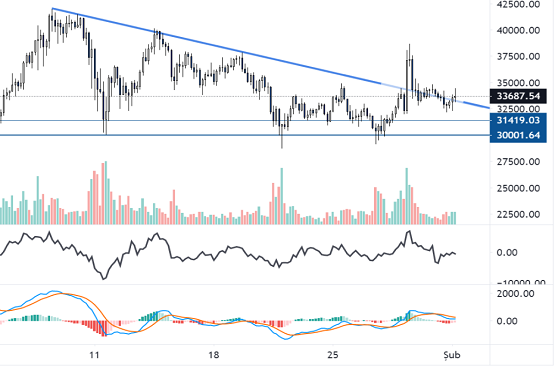 Ethereum held a slightly sideways trend this morning while holding above the $ 1300 level. Although it draws attention with its technical appearance, Ethereum's on chain data is also remarkable and at a point that can support the course in the coming days. There is a rapid withdrawal in the amount of ETH withdrawn from the exchanges in the last 1.5 weeks. There are also positive signals in the changes in the number of active and new addresses in on chain data. Ethereum is presenting a positive fundamental picture in the current moment. There was also a move in favor of BTC in the ETH / BTC clipper. However, in this shear, we maintain our view that movements towards BTC should be evaluated in favor of ETH.

When we consider the ETH / USD parity; The recovery in the lows of the last month and the highs remaining stuck at around $ 1440 offer a rising triangle outlook. In this view, we think that the rises may accelerate after the breaks and this break can be activated after the $ 1140 level is exceeded. Considering the on chain data and technical outlook, we see that the $ 1500 scenario gets stronger. With this view also supported by momentum, the $ 1285 levels are in the major support position in pullbacks. 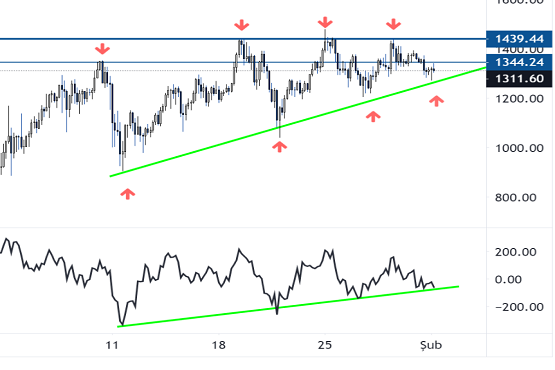 The AVAX / USD pair retreated by 2% this morning, pricing at $ 13.18. The descending channel (blue channel), which started on January 17, was broken with the last movement and ended its effect. This was a sign that the selling pressure on prices was lessening, and it rose rapidly by 25% as it broke up the upper band of the channel at $ 12.00. Subsequent drawdowns brought AVAX back below $ 13,450. With the weakening price momentum, if the downward position continues, the $ 11.80 support may be raised. Staying above $ 13.50 could set new records, but the idle period for a while seems more likely for now. The increase in the sales volume after the record of $ 15.20 indicates that sales at high prices suppress the parity. Still, the outlook is positive. 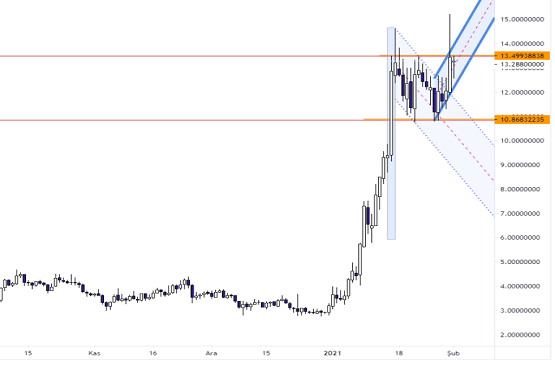 Ripple is the most positively differentiated crypto currency compared to other crypto currencies, with a 16% increase this morning. Since its lawsuit with the SEC, Ripple has made many statements defending the falsehood of these allegations, but it has not been able to relieve XRP from the selling pressure, most importantly because it has submitted official documents that will comfort XRP investors. A day before XRP's increase of up to 60%, Ripple submitted its defense report on the lawsuit with the SEC. On the other hand, it is said that there are organizations to increase XRP prices on many platforms. The alleged 55,000-person Telegram groups have too few investors to achieve a 60% increase on their own, considering Jed McCaleb, who sold $ 1.3 billion in just one day. Still, it is possible that it triggered prices, but it's hard to be the only reason. As we have stated in our newsletters and Crypto Zoom publications many times, we have emphasized that the macro support for XRP, which has been at the bottom for a long time after the pricing of the worst story that could happen, could easily carry it to $ 0.50 and above.

When the XRP / USD parity is examined technically, the target of $ 0.50 was realized with a positive development to be obtained from the data flow of the recovered lows and the created double bottom formation. We can see that it becomes more volatile in the next period. Therefore, it would be more correct to wait for their retracement in XRP. Therefore, caution should be exercised in XRP transactions. As the February 22 litigation deadline approaches, we can see more volatile price levels. The $ 0.46 level is the starting point of the move and our main support level. 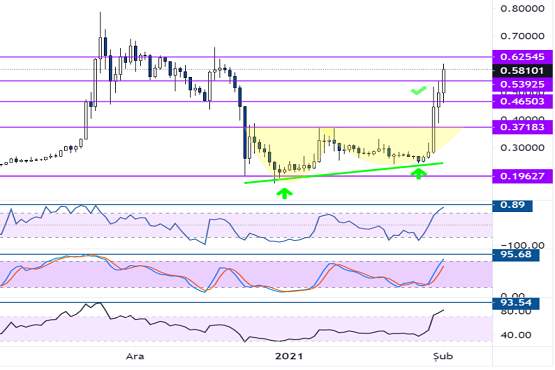 Litecoin is priced at $ 130.00, with a horizontal change on the first day of the week. Looking at monthly returns, almost all cryptocurrencies except Litecoin performed well in the first month of 2021, while LTC remained at -4% in monthly returns. However, while it is said that the new update will be made in February, this situation provides a basic story and leads to the preservation of its potential. On the other hand, Grayscale has been expanding its Litecoin Trust fund by adding 25,500 to its LTC assets last week.

When the LTC / USD parity is analyzed technically, it is observed that the horizontal view is preserved. The levels of the Fibonacci retracements are working as resistance and support levels in the $ 122.30 and $ 145.15 horizontal band. Although the peaks are falling with prices that have been weakening since mid-January, the lows are maintained. This actually created a triangular appearance and we have approached the tip of the triangle, that is, after the compression. These regions and the continuation of the compression may create sudden price movements in the extreme regions of the triangle. With the break above the $ 145.80 level, the upward trend could be increased. The view is horizontal for now. 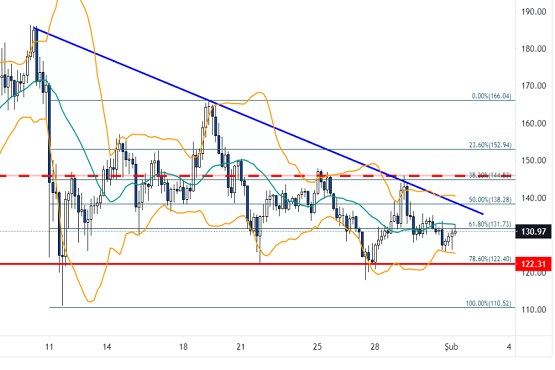 Chainlink is pricing at $ 22.46 this morning with a horizontal percentage change. While we witness that altcoins, which are moving successively, are increasing day by day, this is also very positive for LINK, which is the largest DeFi token in terms of market value. The rapid increase of some stocks, as well as some cryptocurrencies, which has been observed for a long time by organizing thousands of investors on online chat platforms, is unusual. Likewise, considering that DeFi, with its name of decentralized finance, has all the functionality of today's financial system, the increasing mass in this direction may increase the demand for Chainlink. In-chain data shows that the amount of LINK held in stock exchanges is at the lowest level of the last month. In addition, the level of transfers to stock exchanges has dropped to the lowest level in the last three months. The decrease in the amount of LINK ready for sale on the exchanges indicates that the LINKs in cold - hot wallets are increasing and are being kept in line with long-term expectations.

When the LINK / USD parity is considered technically, it is seen that it remains in the bullish channel. So much so that in the last withdrawal, the sub-support of this channel was tested and a hold was achieved above it. The subchannel also coincides with the midpoint of the daily Bollinger bands. Therefore, it is holding at $ 21.60 both in the middle-upper band region where purchases are accelerated, and in the upper middle zone of Bollinger. All of this data can move LINK to the channel midband of $ 25.80, indicating a 15% movement potential. Although the outlook has been horizontal for the past few days, it is within the rising channel and positive in the general frame. 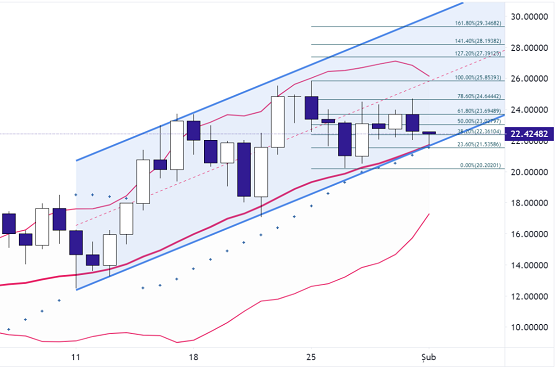 The BAT / USD pair is down 2.5% this morning, pricing around $ 0.2960. BAT's double bottom formation target is now $ 0.3820, rising above the neckline of $ 0.2785, despite a 15% retracement after testing the $ 0.3410 level. The target price scenario will be preserved as long as we go below the neckline. This indicates that it has a potential close to 30% over its level. The parabolic trend created in the technical table represents that the lows remaining at higher levels show a more accelerated increase compared to the linear upward trend. Continuing the rise on the parabolic trend, the $ 0.3410 level in the Fibo'61.80 retracement zone will be the initial resistance and there is no further resistance until the formation target is crossed. The rises are supported by volume, the outlook is very positive. 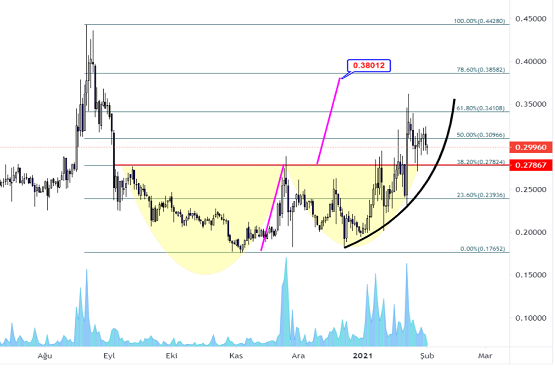