After Elon Musk shared the Shiba photo, over 90.000 interactions about Dogecoin, SHIBA, Floki Inu, and other meme coinson Twitter.

FED Is Ready to Launch Review Process For Potential CBDC

The U.S. Federal Reserve released its plans to initiate a review of the risks and benefits of launching a U.S. digital currency, or Central Bank Digital Currency (CBDC), following the current global trend, according to the WSJ news.

Hong Kong Exploring CBDC As Part of Its Fintech Strategy

According to a recent local report, Vault Digital Funds provided New Zealand investors with a new fund called Vault International Bitcoin Fund. Through it, investors would have the opportunity to add to their portfolio without owning Bitcoin directly.

Bank of America: Bitcoin Is Important; The Crypto Industry Is Too Big to Ignore

Bank of America has published its report “Digital Assets Primer: Only the first inning,” led by Alkesh Shah, head of Global Cryptocurrency and Digital Asset Strategy, providing an in-depth analysis of the current state of the blockchain industry from cryptocurrencies to DeFi and NFTs.

The Securities and Exchange Commission continues to investigate the stablecoin-focused crypto company Circle, according to a regulatory filing dated October 4.

Although Bitcoin experienced some pullbacks earlier this year, it continues to rise rapidly. Last year, Bitcoin increased by over 360% compared to Facebook, only 22%. With recent developments, Bitcoin has outperformed Facebook's market capitalization.

Bitcoin gained a 0,35% value during morning hours; the current price is $49.260. According to a recent local report, Vault Digital Funds provided New Zealand investors with a new fund called Vault International Bitcoin Fund. Through it, investors would have the opportunity to add to their portfolio without owning Bitcoin directly. We suppose next new flows will arrive from other countries and adaptation will increase non-stop.

When we consider the BTC/USDT parity in technical terms, having fallen to the 50-day moving average ($46760) through intraday pullbacks of yesterday, as we mentioned before in the bulletin, BTC closed the day above 2 percent with the support near the 50-day moving average. In the daily chart, MACD continues to give a buy signal. The next price target for is $51.000. 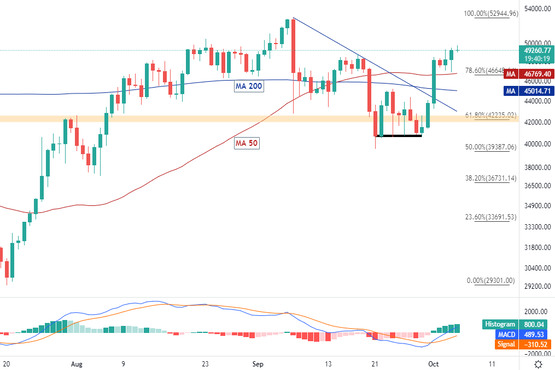 Ethereum gained a 20% value during morning hours, and the current price is $3391,32. As of this morning, the current amount of ETH burned is 436,044 ETH, and the approximate value of its is roughly $1,474,142,498. This number is much larger than the market value of many altcoins in circulation.

When we consider the ETH/USDT parity in technical terms, ETH experienced an intraday drop as Bitcoin did and retreated towards the 50-day moving average of $3300 levels. However, ETH could not close the day in a positive value, unlike Bitcoin, and held to the $3351 level (Fibo'78,60). Our first price target for ETH, which we think will continue to support the 50-day moving average in retreats, is the level of $3670. 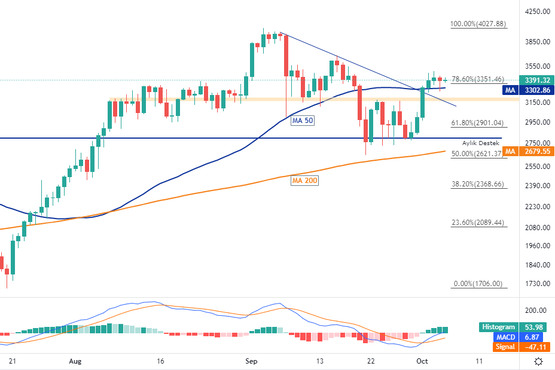 AVAX gained a 0,15% value during morning hours, and the current price is $65,34. When we consider the AVAX/USDT parity in technical terms, in the daily chart, AVAX moves in the ascending channel as of Sept. 13. AVAX is priced near the lower band of the channel; we suppose the rise towards the peak of $64.90 in February 2021 will continue. AVAX closed the day below the Fibo'78,60 tranche. If it breaks upwards and holds on, the next price target is $69.5. 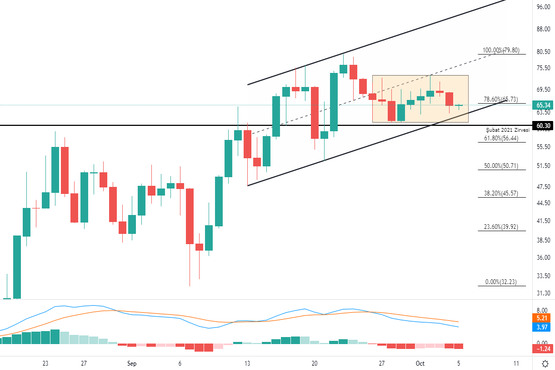 Ripple gained a 0,20% value during morning hours, and the current price is $1,045. When we consider the XRP/USDT parity in technical terms, having retreated near the support level at $, XRP wiped out part of the intraday loss through the support. XRP is now priced between the 50-and 200-day moving average; a break will determine the direction. Within the scope of the total market of long-term technical conditions and news, XRP might break the $1,10 level (200 day-moving average) upwards, which can trigger a rise towards the $1,30. 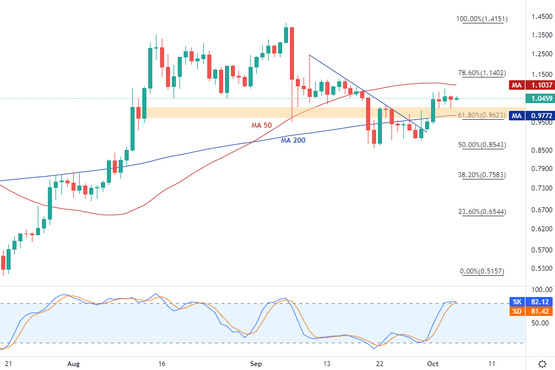 LTC gained a 0,40% value during morning hours, and the current price is $168,1. When we consider the LTC/USDT parity in technical terms, having retreated with the resistance from the $170.9 level (Fibo'61.81) yesterday, LTC tested the same level in the morning hours and faced resistance. LTC is priced at the support level between $165-170. If it loses the direction, a retreat can follow to the $155,4 level (Fibo'50). If LTC closes the day above the 50-day moving average, the next price target will be $189 (200-day moving average). 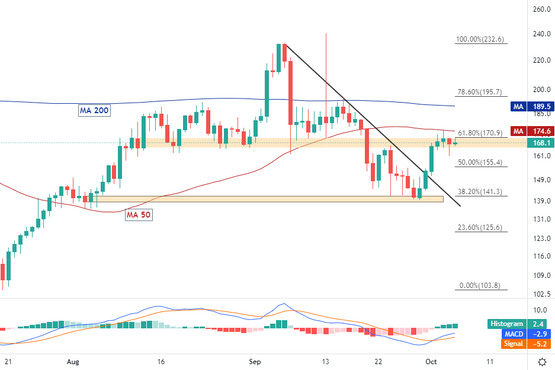 LINK lost a 0,30% value during morning hours, and the current price is $26,54. When we consider the LINK/USDT parity in technical terms, having affected by the total market pullbacks, LTC broke the $26.94 level down (50-day moving average), and retested the downward trend of the current  $25.60 level as of September 6. As we mentioned in yesterday's bulletin, LINK has recently faced resistance from the 200-day moving average, and in the short term, it can continue to retreat. However, along with the break upwards of the resistance near the 200-day moving average, LINK is expected to be resolved the sales pressure and rise. 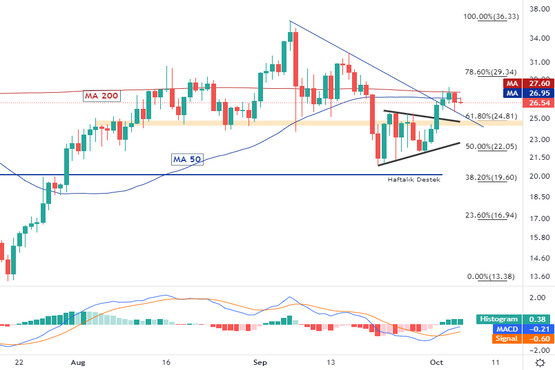 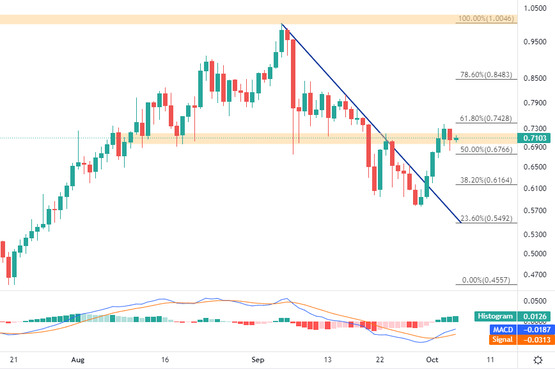