The British Treasury Department has confirmed its commitment to regulating stablecoins following the UST and LUNA collapse. "This will provide financial stability and high regulatory standards, while creating conditions for issuers and service providers to operate and grow in the UK," the Treasury spokesman said.

44 Countries Come Together in El Salvador for Bitcoin!

In El Salvador, which declared Bitcoin a legal currency in June last year, the president, Nayib Bukele, said on his Twitter account that from today, 44 representatives from countries will meet to discuss the digital economy with a focus on Bitcoin.

Grayscale Investments announced that the first European ETF, the Grayscale Future of Finance UCITS ETF, which will be passported for sale across Europe, will be listed on the London Stock Exchange, Stock Exchange Italiana and Deutsche Börse Xetra.

Nomura, Japan's largest investment bank, said in a statement that it would establish a new company to mediate corporate clients' ability to invest in cryptocurrencies, decentralized finance (DeFi) and NFTs.

Emirates Airline Can Accept Bitcoin as a Payment Method!

The world's leading international airline Emirates, which wants to advance with new technology, announced its intention to accept Bitcoin as a payment management as of yesterday. However, Emirates Director of Operations Adel Ahmed Al-Redha said that Emirates is looking for new capabilities to accelerate customers' experience using cryptocurrency, blockchain, NFT and metaverse

After the UST stablecoin disaster that crashed the LUNA market, investors are trying to compensate for their losses while trying to profit from Terra's return at the dip price. On May 14th, it gained nearly 600 percent of value instantly, bringing LUNA's trading volume to over 200 percent, while seeing $6 billion.

Meta, which has been working on launching its own stablecoin for years, announced that it has adopted Bitcoin and the Lighting Network. In addition, Andreessen Horowitz founded a new company called "LightSpark", supported by companies such as Matrix Partners, Paradigm and Coatue. Among Lightspark's closest competitors is Blockstream, Bitcoin's largest infrastructure company.

In BTC, which starts next week in an effort to find support at the level of $30,000, the limited purchases lead to the continuation of bulkless pricing, while the increasing recession concerns in the world limit the demand for risky assets. The fact that the data from China last day point to a contraction in the country's economy that is higher than expected, the downward revision of growth expectations in the US and European economies and the increase in inflation expectations increase the recession concerns, while bond yields increase and demand for risky assets remains limited. On the other hand, we see that corporate interest still continues. According to the latest reports, Emirates, the world's leading airline, has announced that it can accept Bitcoin as a payment method, while Japan's largest investment bank, Nomura, will offer BTC OTC service.
Bitcoin gained a 1,7% value during morning hours and is priced around $30.382. Critical support level for BTC/USDT appears to be 28,600. This level is in the lower line of the rectangular pattern (50-week). As the graph shows, it is very important that this level is not lost in weekly-basis candle. We'll follow closures of over $28,600 to regain momentum for purchases. 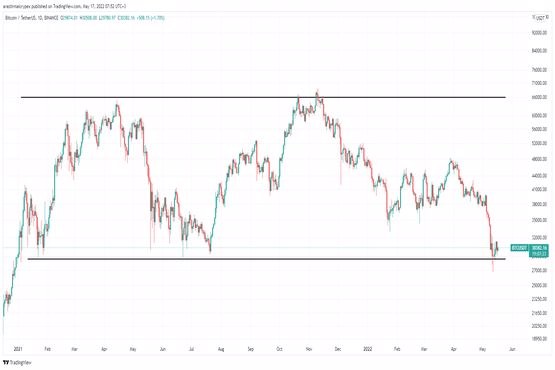 In ETH, where we see that the struggle to find support from the level of 2000 continues as of the first day of the week, we see that the reaction for buying continue as of the morning hours and ETH is more positive than Bitcoin. Grayscale, which has the largest cryptocurrency funds in the world, recently announced that Grayscale Future of Finance UCITS ETF, which is the first European ETF and will have a European-wide sales passport, will be listed on the London Stock Exchange, Stock Exchange Italiana and Deutsche Börse Xetra.

Ethereum lost a 2,65% value during morning hours and is priced around $2077. When we consider the ETH/USDT pair technically, ETH could find support at $1750-1800 (the lower line of the rectangular pattern). Following the downtrend seen on the 4-hour graph, we expect the upward breakout of the triangular formation at the dip. 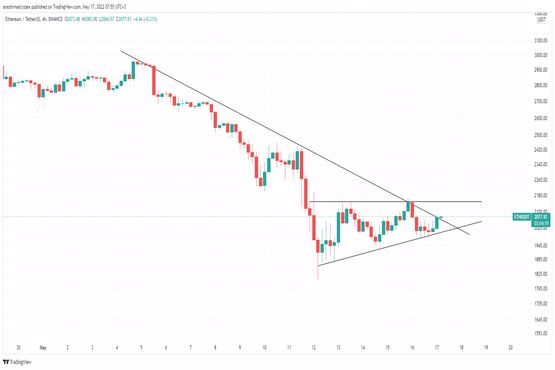 While the crisis with TerraUSD (UST) and the losses in Luna negatively affected the overall cryptocurrency sensitivity, it was one of the most affected coins in AVAX. After falling to $22 on Thursday, Avalanche has gained over 10% value with its response purchases since then, pricing over $34 as of today's morning hours. However, we still see that the buying pressure is limited.

When we examine it technically, the future statements about Terra in the parity, which we see that the sales pressure continues, will be important in terms of reaction purchases in the parity. When we look at the 4-hour graph in the parity where we see that the downtrend continues, the triangular formation formed at the dip. With the breaking of 37 level, which is the resistance point of this triangle, 50 USD can be targeted. 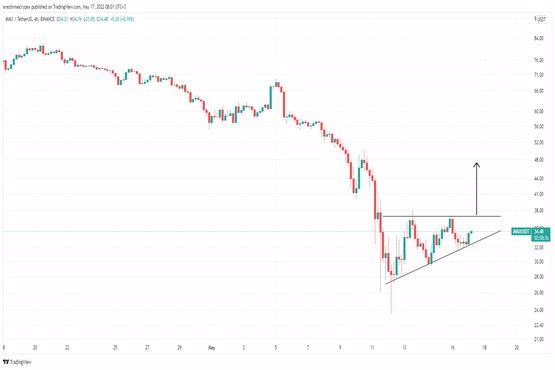 Ripple gained a 3% value during morning hours and is priced around $0.436. When we consider the XRP/USDT parity in technical terms, we see that the uptrend level starting from March 15, 2020, is tested. We can say that the USD 0.42 levels shown by this rising trend are maintained on the weekly graph, so the major uptrend still continues. 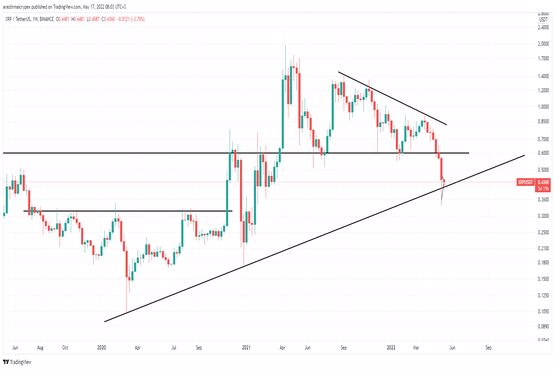 LTC gained a 4,9% value during morning hours and is priced around $70.6. When we consider the LTC/USDT pair technically, there is no major news flow, when sales pressure in altcoins continue. As can be seen in the graph, the level of 68 USD is an important pivot point. We will be monitoring whether this level can be maintained. 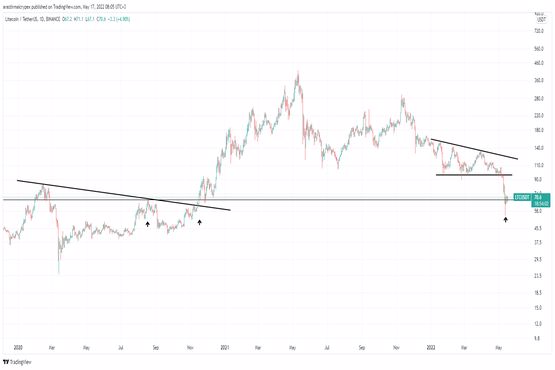 LINK gained a 4,04% value during morning hours and is priced around $7.73. When we consider the LINK/USDT parity technically, the downward trend since November continues and we see that sales have gained momentum since the beginning of the week. When we consider the 1-hour graph, there is an increase in "V Shape." We think that descending channel dips may be suitable for short-term purchases when entering stop-limit. 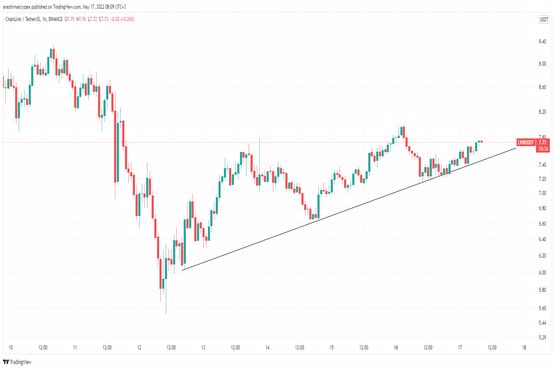 BAT gained a 6,25% value during morning hours, and is priced around $0.418. We see that the downtrend that appeared as of the beginning of April continues. We see that the level of 0.45, which is the dip level in July, is broken downwards. If it manages to stay above 0.45 USD, we think that purchase reactions may appear. 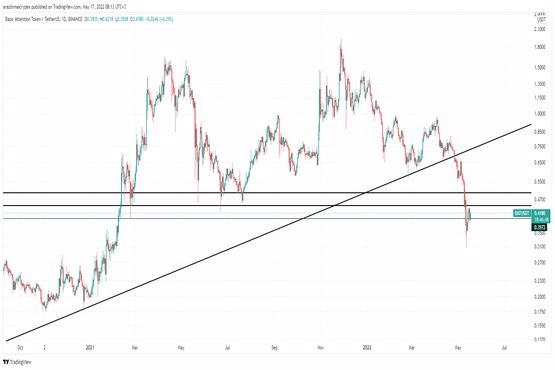