Ethereum Becomes One Of The 100 Most Valuable Assets

Ethereum, the second largest cryptocurrency, started pricing at over $ 1,000 and entered among the top 100 assets by market cap. Ethereum's market cap has risen to over $ 138 billion, making it the 97th largest asset.

According to data from DeFi Pulse on January 7, more than $ 22 billion of cryptocurrencies were locked in decentralized finance (DeFi). Thus, the amount, which was $ 10 billion in November, has more than doubled in just two months.

During the Turgut Özal period, the state minister responsible for economy, Prof. Dr. In an event organized by Işın Çelebi, Prof. Dr. He met with Mahfi Eğilmez and shared his predictions. Çelebi predicted that Bitcoin will be $ 50,000 before the end of 2021.

The Number Of Big Bitcoin Investors Broke An All-Time Record

One of the Largest Cryptocurrency Investments in History Has Been Made

A new one has been added to cryptocurrency investments, which have become a trend for companies. Coinbase, a San Francisco Stock Exchange, announced that the One River investment fund made the largest cryptocurrency purchase in history. Vitalik announces that Ethereum transaction fees will decrease

All-time record! Both the fact that Bitcoin saw $ 37,800 and the market size of crypto coins exceeding $ 1 trillion brought this title. Recently, we have witnessed the movements in Asian hours. In daily changes, the increase in the number of newly opened accounts in Bitcoin was 12%, and the increase in active address (balanced account) openings was 9%. The arrival of new participants to the market is positive both in terms of depth and adoption of cryptocurrencies. Bitcoin hash rate rose to 13.3%, reaching an all-time record. This increase in traffic density also supports the price, but after a while, it may increase the miner fees as well as bring profit realizations in such a case. Bitcoin dominance is still dominant at 69%.

When we consider the BTCUSD parity technically; trading at $ 37,000 this morning, with a 1% gain. After breaking the all-time record, he faced profit selling in his resistance. In BTC, which continues its movements within the Ascension channel, the channel subband passes between 35,800-36,000. In retractions, this region may remain as a correction, as long as the channel is not broken, the upward momentum can be maintained. The outlook is positive and bullish. 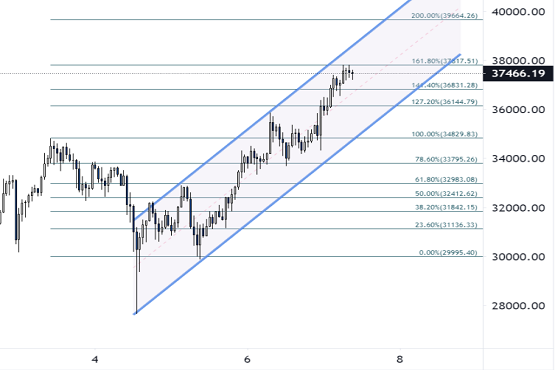 Ethereum experienced a nice move as it broke $ 1100, expanding its earnings by another $ 100, testing the $ 1200 level this morning. Ethereum's market size thus reached $ 139 billion. For a while, the interest in the network was decreasing due to the high transfer and transaction fees, which we call gas fees. With the decrease in the gas fee (transaction fee) for the last three days, ETH parities have also become active. The amount locked in DeFi has approached $ 22 billion. Ethereum and tokens using the Ethereum network seem quite ready for the altcoin season that can begin after the decline of Bitcoin dominance.

When we consider ETH / USD technically, 1100 was a very important resistance and with the breaking of this resistance, the "rising triangle" formation, which is the continuation of the upward trend, started. The ETH / USD pair will not break from the $ 1400 target, unless the previous high of $ 1170 is broken in the pullbacks. Therefore, $ 1170 will be watched as major support throughout the day. The outlook is horizontal in the hourly period, while the general view is in a positive direction. 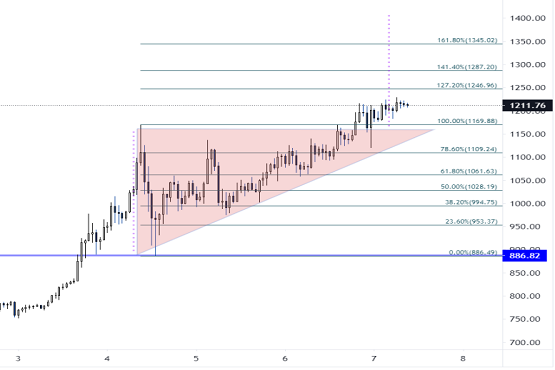 The AVAX / USD pair is priced around $ 4.63, generating a 0.5% positive daily return. Although it has not yet tested its record $ 5 level, it is also increasing its prices on its own ladder with the rising demand for altcoins and the increasing appetite. Nevertheless, although its low depth provides high profits to its investors in short-term movements, it can leave spot trades in a difficult situation for large purchases. When we examine the AVAX / USD parity technically, we see that it continues to rise with minor corrections. 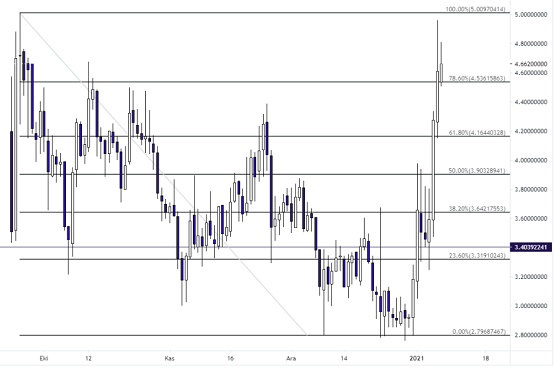 The XRP / USD pair is pricing around $ 0.29, up 16% on a daily basis. Uphold, which is also a crypto currency exchange, after being delisted from more than twenty exchanges, said in a statement; He stated that the lawsuit between the SEC and Ripple has not yet been concluded, so XRP cannot be accepted as a security for now. For this reason, he stated that they will keep the XRP open for transactions as long as the volume does not decrease to prevent listing. XRP pleased the investor with this move, after its sudden rise, its position dropped significantly after the SEC case and prevented the investor from selling it by putting it at a loss. On the other hand, it loses value in terms of volume after sales, making it more vulnerable to manipulations. For this reason, we do not expect the sudden increases and decreases in the price to be trending.

If we examine the XRP / USD pair technically, after testing the $ 0.24 level several times and retracting, it finally broke the target of $ 0.32 and priced around $ 0.36. After this short-term rise, we see that the price is priced above the Fibo'78.60 correction using the $ 0.28 level as support. If the price remaining in the $ 0.24 and upper zone provides permanence, we can witness the continuation of the upward reactions. 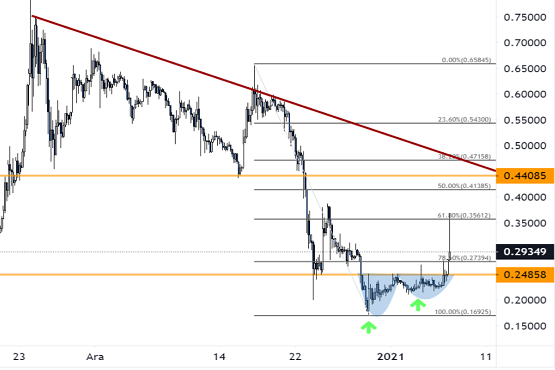 The LTC / USD pair is priced at around $ 171 in the morning, up 1% on a daily basis. With bitcoin pricing reaching record levels, all eyes turned to Litecoin. In addition, the fact that PayPal Bitcoin volume reaches 113 billion dollars and Litecoin is a crypto currency with transaction validity by paypal creates positive expectations on the Litecoin side. On the other hand, the MimbleWimble update, which will come in Litecoin, creates a basic positive story in Litecoin.

The $ 270 level in LTC / USD, indicated by the double bottom formation, continues. We may witness corrections as we move towards the price target, but the critical point here is that we should not exclude the $ 270 level from the possibilities as long as we stay above the $ 145 level. We will be tracking the $ 176 resistance on a daily basis. As long as the current level is not broken, retractions and corrections may occur, but we can say that it is open if $ 176 is broken, as it will want to close the return gap with Bitcoin dominance and Bitcoin. The LTC / USD parity maintains its positive appearance within the boundaries of the rising channel it has created. 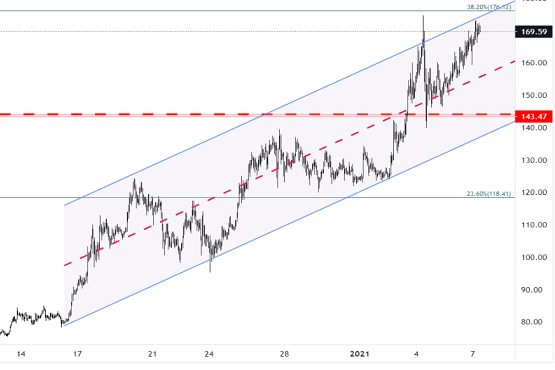 LINK / USD hit $ 17.00 yesterday with gains over 10%. In LINK / USD, where transactions were passed around $ 16.75 with a 3% retreat this morning, the yield gap between them and ETH was closed yesterday. This morning, again, with purchases in Asian hours, the ETH scissors again go above 10 points, but LINK is not out of the $ 17 race. Chainlink has smart contracts over 7 billion dollars in size. The interest in the money locked in DeFi and the Ethereum network keeps LINK strong as well. After the fundamentally supported LINK tested the $ 17.00 level, the story evolved a little more technically.

When we consider the LINK / USD parity technically; The declining trend that has been going on since the $ 20 level it tested in mid-August ended with the upward break of the $ 15 level yesterday. However, according to the correction zones, the $ 17.30 resistance corresponding to the Fibo'78.6 slice could not be broken and a technical turnaround occurred. LINK / USD will be open to new highs and intraday reactions, as long as it does not drop below the $ 15.15 level during retracements. Therefore, places close to support levels should be followed. The general outlook is positive and bullish. 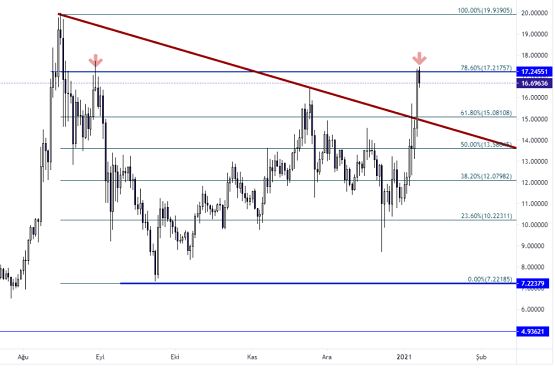 BAT / USD rose sharply to $ 0.27 levels. In general view, the increasing interest in the crypto money market caused each coin to get a share of the pie, especially in this period when Bitcoin dominance was high, altcoins with high correlation with BTC benefited greatly from this situation. The market size and the amount withdrawn from the exchanges of BAT, which showed a positive correlation with Bitcoin, increased. Quantitative values supported positive, technical indicators also confirmed the bullish move.

Technically speaking, after the price approaching to $ 0.29 in December, there was a downward trend in the last month. This trend broke yesterday and the uptrend gained momentum. Momentum and MACD are still moving positively in the four-hour period. As long as the $ 0.2645 level is not broken down, the $ 0.29 levels can still be tested. This support will be followed throughout the day. 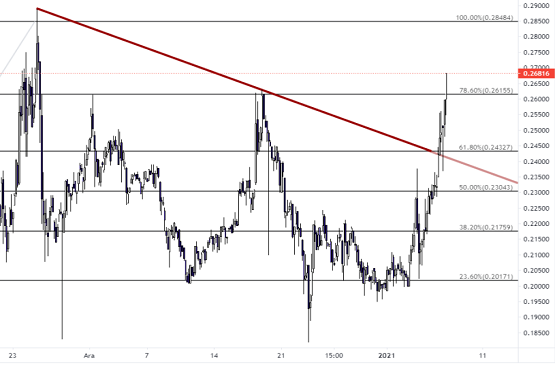