The update we have been talking about for about 2 weeks in Ethereum has been completed. Thus, one of the most important steps expected for the ETH merge is the Difficulty Bomb, which has been pushed forward from 15,050,000 blocks to 700,000 blocks. This process is considered a 100-day postponement.

South Korea-based technology giant Samsung announced that they are working on a 3-nanometer chip. These chips will be used in Bitcoin mining. Their first customers have already been announced. China-based PanSemi and US-based Qualcomm are said to have booked the new chip.

Coinbase will share its customers' location data with the U.S. Immigration and Customs Enforcement agency. This sharing will also include data from the past period. In a statement following the backlash to the news of the sale of the data, the Coinbase side said that the company uses fully online and public data and does not contain any information from anyone that would be identified as personal information or any registered Coinbase user data.

The famous British car manufacturer Lotus NFT is making plans to enter the market. Lotus, which has agreed with different companies for NFT collections and support, announced that support and services on blockchain will be received from Ripple. Lotus' investment may indicate that the car industry is also starting to enter the NFT world.

The Bank of International Settlements (BIS), which is a member of 55 Switzerland-based countries, provides bank regulations and acts as an intermediary in money transfers, announced that banks can hold 1% of their reserves in Bitcoin. Evaluating crypto assets in 2 groups, BIS made different criteria and recommendations for both groups.

There was talk of Celsius, which had sunk since the Terra crisis, being bought by big companies. Finally, Sam Bankman-Fried, who has invested in a crypto asset exchange and different crypto projects, announced that they are giving up on buying the company after reviewing Celsius' financial documents.

Bitcoin made a heavy sale yesterday and fell to 18,900 levels. This selling pressure from digital asset funds and the liquidation of some sinking VC companies reduced the price of BTC by $ 1200. Later, although it climbed to 20,900 levels with a large volume entry during the night hours, it seems to have returned to 19,500 levels during these hours. We will be monitoring how long volatility and major movements will last at this level.

Bitcoin is priced at $ 19,390 with a loss of 2.82% in the morning hours. The remaining middle band of BTC, which continues its movement in the channel on the hour, has broken the 20,000 level 3 times in 24 hours and made a big move. The most critical data for BTC, which is currently in the middle of the lower band, is that the 50-Month moving average closed below after a very long time. It is quite difficult to predict a direction to its movement at the moment, but the 18,000 level is the most critical zone for the downward movement, which may cause a larger decline after the voluminous breakdown of the ratio. 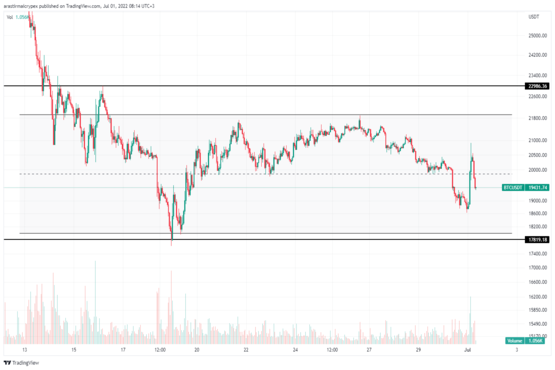 Today, ETH, which lost 1.98% of its value in the morning hours, is priced at $ 1050. In ETH, which fell to $ 1000 after the movements in crypto assets yesterday, the strong pricing of the last 10 days left its place again to the last month. In fact, Ethereum, which did not experience any negative development, on the contrary, had positive data from the CoinShares report. However, Ethereum, which first broke the rising channel it was in, then fell to the level of $ 1015, which we mentioned as a critical level. In case of a break of this level, we can say that attention should be paid to the 800-850 dollar band. 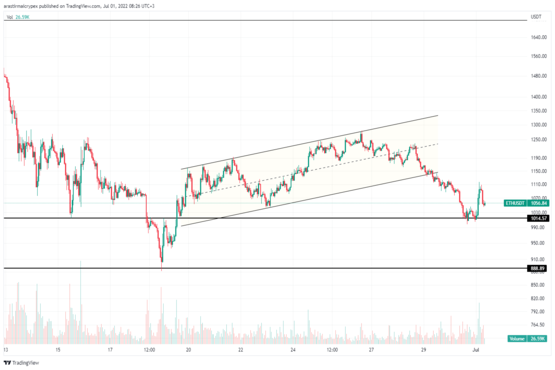 AVAX, which has lost 5.12% of its value as of the morning hours, is priced at $ 16.13. When we look at AVAX's 4-hour chart, we see that the strong support at the $16 levels could not be broken after breaking all critical levels. We can say that if the 16 support, which has not been tested and broken about 5 times, is broken, AWAX may go down to the $ 14 levels, and in a possible upward movement, a breakdown of the 18.50 level should be expected. 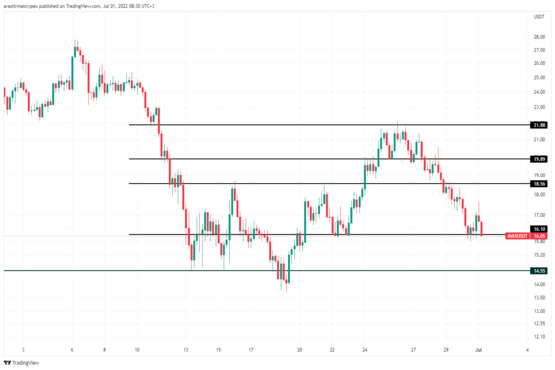 XRP, which lost 5.63% of its value in the morning, is priced at $ 0.3135. It first broke the descending channel it was in on the hourly chart to the downside and returned to the channel again. Then he broke the channel upwards, but he returned to the canal. We can say that Ripple, which is currently in the middle band of the channel, has found good support at that level. In case of a breakdown of the middle band, the probability of falling below $ 0.30 seems quite high. 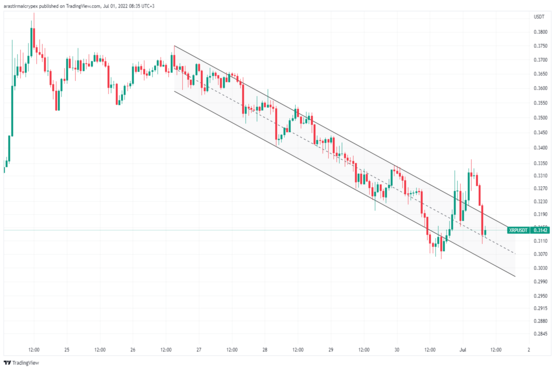 LTC is trading at $52.83, down 1.93% as of morning hours. LTC is in a channel by the hour. Although it tried to break the channel downwards, it remained strong at the $50 level and then made an upward turn. LTC, which is currently near the channel midband, gives a stronger image than other coins. 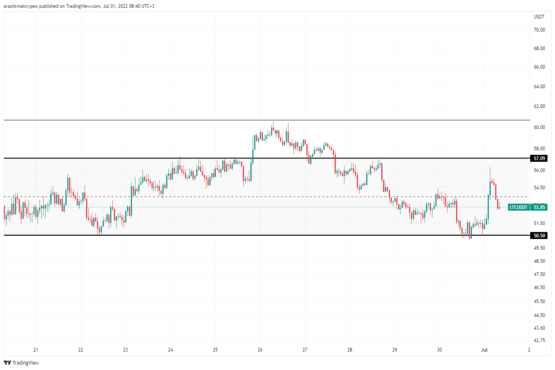 LINK is down 2.87% at $6.09 today. LINK could not break the support at 7.50 on June 12 and entered a rectangular formation between 5.30-7.50. LINK, which could not break the 5.40 level despite testing it 2 times, gave a very strong image in yesterday's decline. In BTC's depreciation of up to 5.5%, LINK lost the most 4% of its value. We will be following the upward and downward movements of LINK, which is currently stuck between the 5.80-6.40 levels. 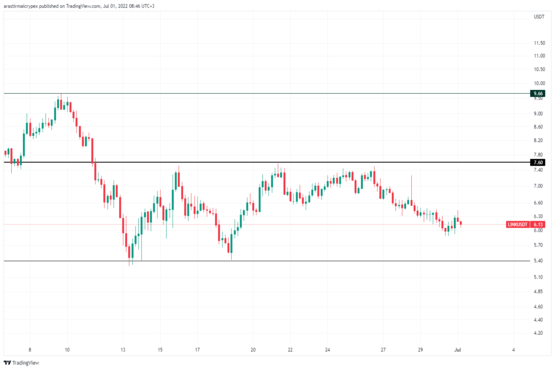 BAT is trading at $0.3887, down 1% as of morning hours. When we look at the 4-hour chart, BAT, which is still in the same channel, managed to stay in the upper parts of the channel middle band. We can say that the BAT, which is currently showing a very strong image, seems strong enough to break the channel in a positive movement of the market. 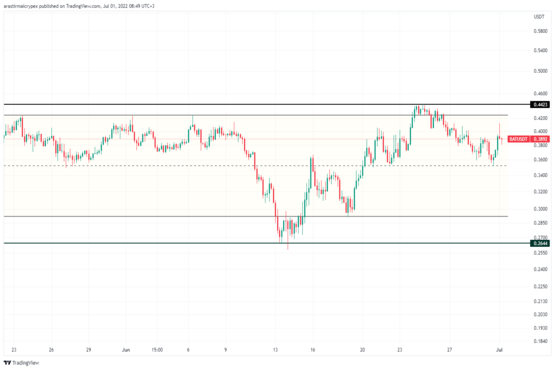