Jamaica to Start Pilots for CBDC in August

The Central Bank of Jamaica plans to start pilots for its central bank digital currency (CBDC) in August.

Visa has announced that it has partnered with more than 50 crypto companies to allow its customers to spend and convert digital currencies through its card program.

The Reserve Bank of New Zealand will explore the potential of a central bank digital currency (CBDC) as part of a series of consultations by the end of the year.

Spaniards Now Have to Disclose About All Crypto Assets

According to the new law approved in Spain as part of the fight against fraud, Spanish citizens are now obliged to provide information about all crypto assets they hold inside and outside the country.

Comment from the Prosecutor General of Russia on Cryptocurrency Regulations

Bitcoin, which lost value by 1.23 percent in the morning hours, is priced at $ 33,494. There is a mixed course in global markets as of morning hours. In the FOMC minutes released by the FED, while the concerns about inflation and employment are still continuing, the committee's decision to follow the employment and inflation data in the coming months for asset reduction gave a message that the process will be prolonged. With the increase in US 10-year bond yields and the decrease in interest rates, we see that investors are looking for safe haven and long-term investments. With these developments, along with commodities, the trend in the cryptocurrency market, especially Bitcoin, is negative as of the morning hours.

When we consider the BTC/USDT parity technically, as of the morning hours, BTC, which broke the downward trend in the past days, retested this descending trend. For BTC, which lost its support at $ 33,500, these levels will now work as resistance levels. If there is persistence above the $33,500 levels, we would expect the price to move towards the Fibo'23.60 retracement level ($34,838). If the downside continues, we expect $32,586 levels, which coincides with the monthly DEMA level, to act as support. Buying near support and selling near resistance will be a more appropriate strategy, as there is an indecisive course in the short term. 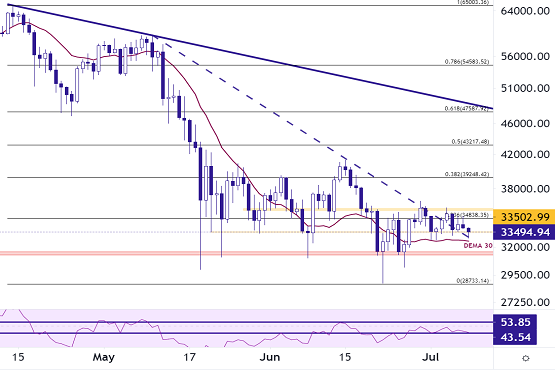 Ethereum, which lost 4 percent in the morning hours, is priced at $ 2222. There was a very positive trend yesterday with the news that the expected London hard fork in Ethereum will be held on August 4. On the other hand, the fact that gas fees have reached the lowest level since March 2020 can be seen as an indicator of the decreasing volume on the Ethereum side. Although the short-term trend is negative in the morning hours, we maintain our positive view for Ethereum in the long-term, especially considering the upcoming EIP 1559 and EIP 3554 updates.

When we look at the ETH/USDT parity technically, ETH, which was priced above the Fibo'23.60 correction level ($ 2329) yesterday, could not make a daily close at these levels and is priced at $ 2222 as of the morning hours. Priced just above the two-week DEMA level at $2218, if ETH loses support at these levels, a pullback to $2100 is possible. In case of an uptrend, the closest resistance level will be the $2329 levels. It may be healthier to follow a short-term buy-sell strategy by following the support and resistances. 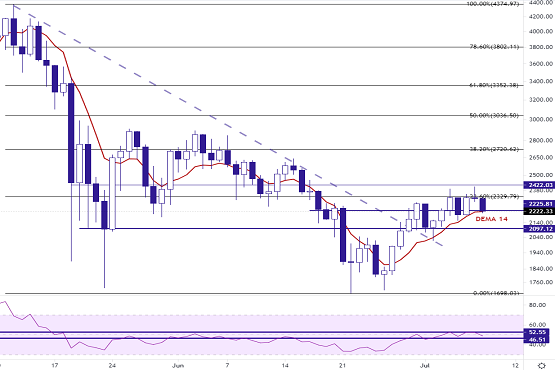 Losing about 6.0 percent in the morning hours, AVAX is priced at $12.32. When we examine the AVAX/USDT parity technically in the 1-hour period, the ascending channel formation that exists as of June 22 is seen. A double top formation was formed at the levels close to the upper band of the channel yesterday. With resistance at $14.20, AVAX broke the $12.74 level, which coincides with the channel middle band and the 30-day moving average, to $12.20. In the hourly period, the MACD maintains the sell signal. As long as the bearish movement continues for AVAX, the next support point is the channel lower band at $11.5. Unless these levels are lost to the downside, we expect the price movement to continue within the channel. 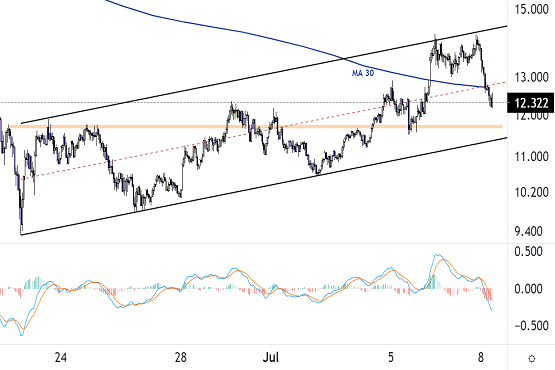 Ripple, which fell by 2.74 percent in the morning hours, is priced at $ 0.634. In the case of Ripple and the SEC, today the SEC will present the letter to the judge against Ripple's response about its ex-employee. At this point, Judge Netburn will make the decision on whether to testify the former SEC employee in the light of the reasons. In case of a trend in favor of Ripple, it may be possible to see a positive course in pricing.

When we consider the XRP/USDT parity technically, we see that the rising trend that has been continuing since June 22nd has been broken down as of the morning hours. With the general bearish movement continuing in the market, the closest support level to follow in XRP will be the $0.60 levels. In case of a possible bullish move, XRP can be expected to test the downtrend ($0.66). A return to the uptrend can be expected for new purchases, or buying near support and selling near resistance may be appropriate. Parabolic SAR continues to signal “sell”. 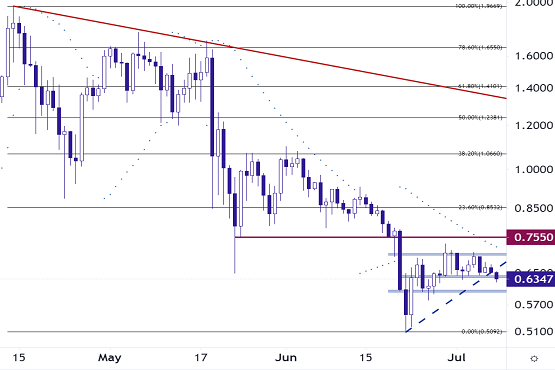 When we look at the LTC/USDT parity technically, we see that it retested the descending trend that it managed to break up before, as of the morning hours, and broke the upward trend that has been continuing since June 22nd. If LTC makes a 4-hour close above the $135 levels, we would expect the price to move towards the $140 levels, but if the downtrend continues, the nearest support level is at $129. In the short term, for new purchases, a return to the rising trend can be expected or reaction purchases can be made from support closes. 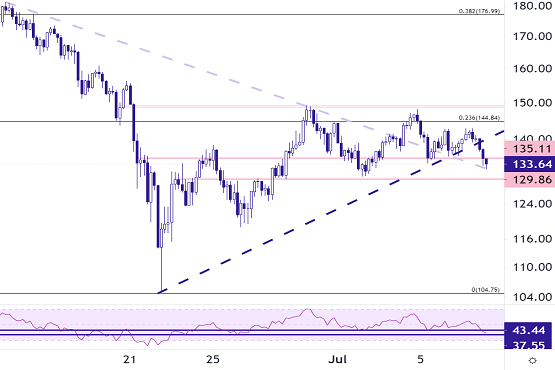 Losing value by 4.88 percent in the morning hours, LINK is priced at $ 18.83. When we analyze the chain data, there are net LINK entries to the stock markets yesterday. These data, in a way, support the decline while telling us that the investor transfers LINK to the stock markets in order to sell.

When we look at the LINK/USDT pair technically, we see that it rose as high as $21 yesterday, but lost the support at $19.69, which coincides with the Fibo'23.60 correction level, as of the morning. For LINK, with the nearest support at $18.39, we would expect $19.69 to act as resistance. Parabolic SAR is a buy signal for LINK. In the short term, buying near support and selling near resistance may be more appropriate. 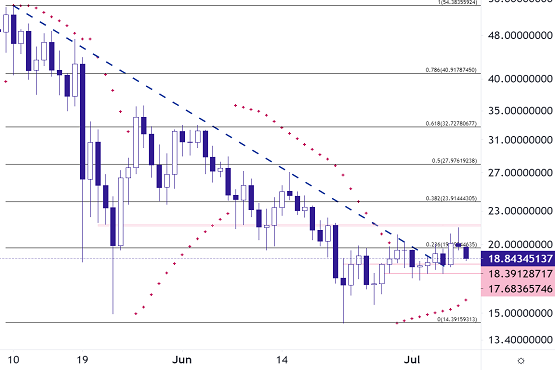 BAT, which lost approximately 5 percent in the morning hours, is priced at 0.583 dollars. When we examine the BAT/USDT parity technically in the 4-hour period, we see that the price movement continues within the ascending channel that has existed since June 22. Affected by the market-wide declines yesterday, BAT broke the support level at $0.62 to the downside and the declines accelerated. Having found support in the lower channel band, BAT is priced below the $0.598 level, corresponding to its monthly moving average. If persistence is provided above the level of $ 0.581, which corresponds to the lower band of the channel, a rise can be seen at $ 0.62 first, and towards the levels of $ 0.67, which is the channel middle band. In the 4-hour period, the stochastic maintains the sell signal. If the price action continues to decline and there is a close below the channel lower band, the closest support levels are read as $ 0.544 and $ 0.525. 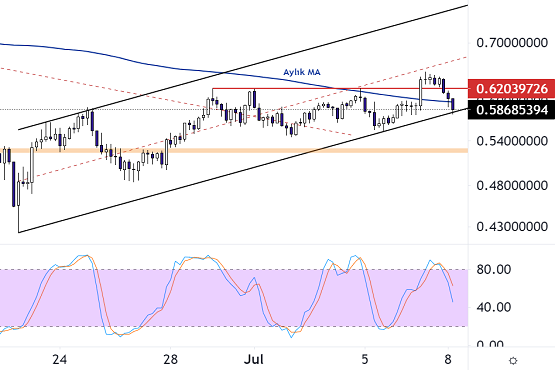