We have now entered the final stages for the long-awaited Ethereum merger. With the transition from the PoW consensus to the PoS consensus, the era of mining in Ethereum will end. While it is expected to take place in August after the successful results of the tests and developments, the merge date, which is said to be delayed to September-October, was proposed by Tim Beiko as September 19 in a teleconference between ETH developers. For the Ethereum network, which will reduce energy consumption by up to 99% with Merge, this development becomes even more important in this period when the energy consumption and emission problems of crypto assets are on the agenda all over the world.

The Central African Republic, which has made Bitcoin the official currency, then announced the local cryptocurrency Sango and announced the acceleration of the transition to digital assets, will now have Bitcoin as a reserve asset. The country is the first country in Africa to officially accept Bitcoin, and it is among the leading countries in the world. Sango will also be released on July 25.

The European Central Bank, which has shown a negative approach to crypto assets, has published a report stating that they are worried about the carbon footprint and energy consumption created by crypto assets working with the Proof of Work consensus and that a restriction or ban on mining may be imposed by 2025. The report, which also evaluated the PoS system, stated that crypto assets in the PoS consensus only require enough energy consumption to consume enough energy for a US town of 2,000 households. In the report, the assets working in the PoW consensus were compared to cars running on fossil fuels, while PoS assets were compared to electric vehicles. In addition, the report said that despite Ethereum's transition to PoS, this transition seems unlikely for Bitcoin.

Yuga Labs, the owner of projects such as Bored Ape Metaverse and ApeCoin, announced the metaverse gaming platform called Otherside. For now, the platform will only be open to those who own land on the Otherside. Before it became fully open for participation, 4300 players were sent invitations and an online trial tour was organized.

A Twitter account sharing Shiba INU burning data tweeted on Saturday, July 16, that 140 million Shibas were sent to dead wallets (burned). Shiba investors working to restrict the supply called scarce in Shiba stated that a total of 410,372,927,333,423 Shibas were burned. It is 88% below the Shiba ATH (All Time High) level.

Ripple CEO Brad Garlinghouse made statements about Ripple's ongoing court case with the SEC. Garlinghouse stated that they have spent close to $ 100 million in the court process against the SEC, adding that they have done this not only for Ripple, but for the entire industry. Although there is still no significant progress in the court process, there are small positive developments.

The inflation data announced in the US, Celsius' bankruptcy application and the European Central Bank's statements on restriction or prohibition had a short-term negative impact on the market. Bitcoin, which started to decline as of the beginning of last week, fell to the 19,000 support and then started to rise again. The merge announcement from the Ethereum network and its rise of about 30% created significant activity in the entire crypto market.

Bitcoin is pricing in at $21,296 today, with a 2.41% gain in value in the morning. When we look at the 4-hour chart, Bitcoin, which has been in the same channel since the beginning of June, made an upward movement after testing the channel midband several times. We can say that the channel breakdown should be waited for the upward movement. We can also say that the 20,500 and 19,300 levels are working as important support levels with repeated confirmations and that approaching these levels can create opportunities. 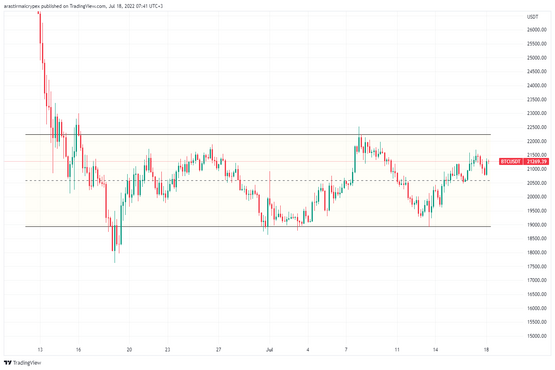 Ethereum, which has fallen to $ 1000 levels with a very weak pricing since mid-May, continues to experience positive developments related to the expected merge. With the Gray Glacier upgrade following the successful conclusion of the trials on the testnets for Merge, the merge date was evaluated as positive, even if it was postponed. Last week, the September 19 date was talked about by Ethereum developers, which pushed the price up by 30%. The fact that Ethereum will restrict supply and reduce energy consumption by almost 99% increases the importance of merge. Most investors also think that Ethereum will differ from Bitcoin in price and will be quite valuable. Giving a clear date in such an environment has brought about a significant rise, especially in Ethereum.

Today, ETH, which gained 4.92% in the morning hours, is priced at $ 1404. As with almost the entire market, we were seeing a channel movement in Ethereum. However, with the news of merger, Ethereum made an upward movement of about 30% and rose to $ 1400 levels. In Ethereum, which broke the channel upwards, we can now say that the 1276 level can work as support and the next target is the $ 1700 level. 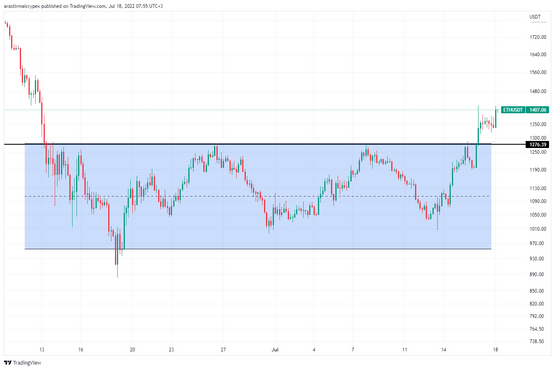 AVAX, which has gained 7.08% as of the morning hours, is priced at $ 18.70. After AVAX tested the channel midband several times in the channel it is in and broke it above and down, it started to test the channel resistance again, especially with the rise in Ethereum. Although AVAX, which has risen after testing the mid-channel band of $ 18 several times, is currently breaking the $ 22 level, we can say that 4-hour and daily closes should come above this level. 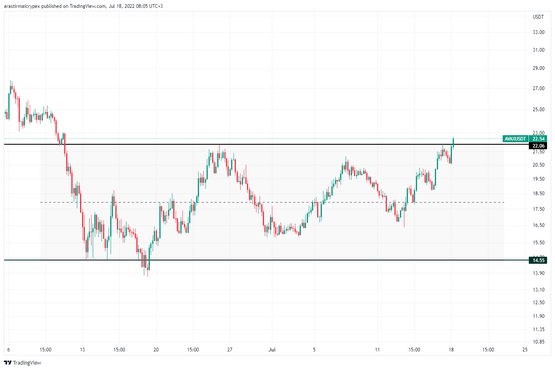 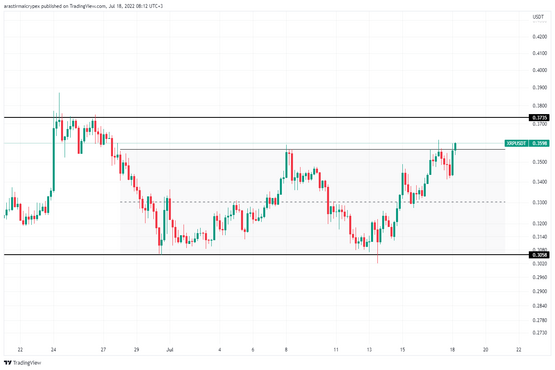 LTC is trading at $57.65, up 3.34% as of morning hours. LTC, which spent the last 2 weeks with a weak pricing, broke the channel to the downside and fell to $ 45 levels. However, LTC, which achieved an increase of approximately 25% from the bottom with the upward movement in the market, first returned to the channel and then broke the channel middle band of 54.50 and continued its progress towards the upper band of the channel. In LTC, we can say that the critical level in the upward movement is the $60.60 level. In a possible reversal, the channel midband at 54.50 will serve as support. 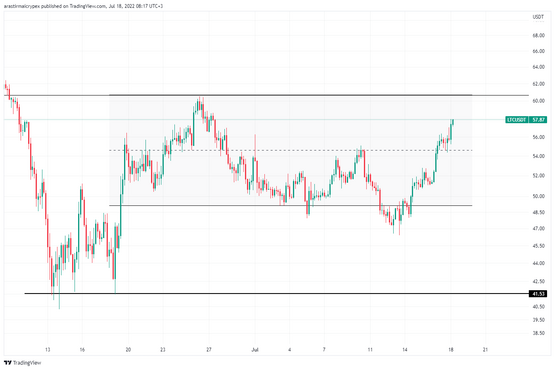 LINK is pricing in at $6.66, up 4.92% today. LINK, like most coins, was in a channel movement. The channel at the 6.2 level started to rise with support from the middle band and then breaks the channel resistance of 6.54 for several periods. At the same time, LINK, which is in a falling triangle formation when viewed for a long time, tests the resistance in the triangle after the channel breakdown. A breakdown of this level could provide a significant uptrend. 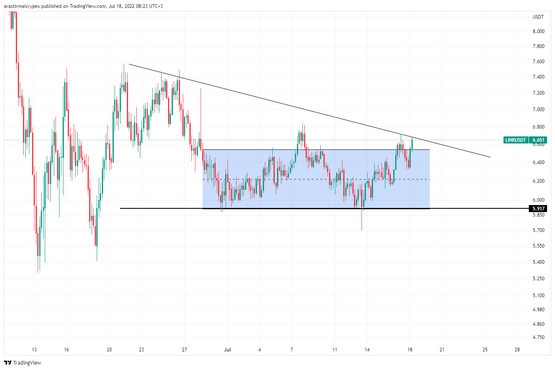 BAT is trading at $0.40, up 4.04% as of morning hours. While BAT was about to break up the channel it has been in for a long time with a strong pricing, it experienced a 20% decline from the peak after a big selling movement and fell below the channel middle band. The positive mood in the market afterwards allowed BAT to rise above the channel mid-band and then move upwards without breaking, although it was tested several times. Although it sees a small resistance at 0.40 levels, it will move back to the upper band of 0.44 after the breakdown of the ratio. 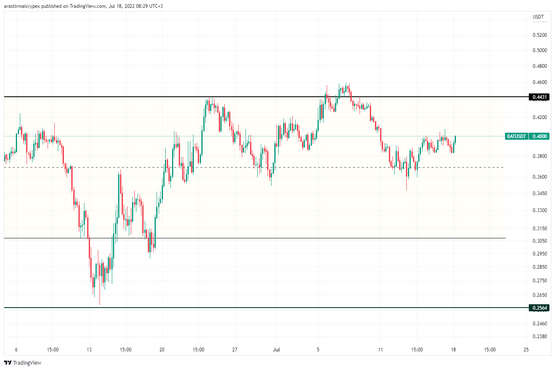