Ethereum Now Worth More Than Bank of America

Forming a significant amount of institutional base last year with the launch of Ethereum-based exchange traded funds ETFs and ETPs, Ethereum has surpassed the total market cap of Bank of America with its over $3,000 market cap.

SEC Will Meet on May 6

After the final hearing of the case between the SEC and Ripple on April 30, there was no clear decision on XRP. While awaiting court's response on the matter, the SEC issued an emergency meeting order for May 6. The meeting will be closed to the press.

New York based fund management company Wisdom Tree has started an Ethereum ETP which is supported physically in two European exchanges. Wisdom Tree has an asset of $33 billion worth around the world.

1 billion XRP has been exited from the Ripple wallet and, according to Whale Alert, it has been released in two sets of 500 million. These XRPs will support liquidity in exchanges and finance Ripple operations.

Venture capital firm Andreessen Horowitz (a16z) is preparing to establish a new crypto fund between $800 million and $1 billion, according to the Financial Times. The company has investments for many cryptocurrency organizations.

Bitcoin’s biggest update Taproot Activation has started. With this update the data amount transferred to and stored on Bitcoin blockchain will be reduced. The transaction fee will drop and more transactions will be available in each block.

Chinese Central Bank has signed a strategic partnership agreement with Ant Group, the fintech establishment of Alibaba Group, for the digital currency studies. According to the statements Ant Group will create a technical platform for CBDC studies.

Bitcoin is trading around $58,000 this morning, gaining over 2 percent. We see that the number of active new addresses in BTC, which broke the record by testing the $64,800 level about 3 weeks ago, started to move again, just like Ethereum. After SegWit, the trial codes of the Taproot update planned for Bitcoin this year have been published on GitHub. It is thought that there will be no difficulty in the update, which requires the support of 90 percent of the miners, and there will be a transition in November.

When we consider BTC/USD technically, the last DEMA crossover that occurred on April 12 started to form again and weekly monthly DEMAs signaled $56,000 to buy. In the bullish channel, the recovery may continue towards the mid-band past $62,000. The outlook is positive. 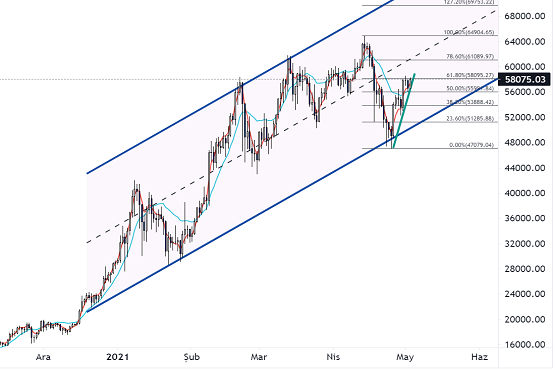 Ethereum is pricing at $3,100 this morning, up 5 percent. Our positive view for Ethereum is still continuing. EIP 1559-London hard fork in Ethereum, which we think will be a fast summer after the Berlin hard fork - Optimisim and especially Layer 2 solutions are not included in the prices yet. Continuous funding rates in Ethereum did not support exceeding the $3,000 level. However, the start of purchase contracts can be interpreted as a new development.

When we consider ETH/BTC technically, the short one of the rising triangle, which has two formations, has seen its target and the target of the long triangle is passing the level of $3,170. The $3,000 and $2,930 levels appear as support for a possible profit realization for Ethereum, whose trend is confirmed almost 100%. The trend is positive, but it is necessary to wait for the resistance zones to break or some retraction for purchase. 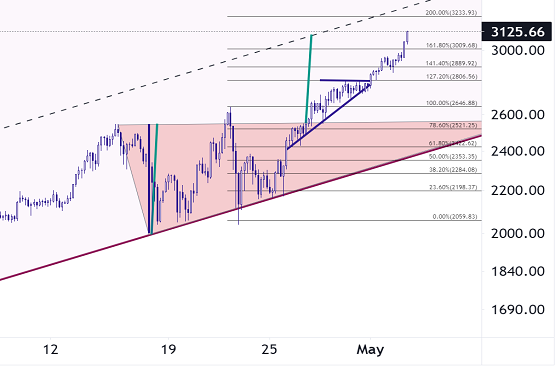 Although the  AVAX/USD parity increased by 4% this morning and was above the $32.60 level, it has achieved the highest pricing in the last 15 days with the test of $35.60 in the last two days. Afterwards, although it has seen some selling pressure, for now, Fibo is seeking support from the $32.70 zone, which is above the $61.80 zone. $30.00 will be critical for pullbacks, while $36.00 TOBO will be the target for rises. The only thing that needs attention will be the follow-up of the $32.70 level in Fibo'61.8 slice. Because it has fallen below its trend with a high slope. There is also a possible risk of pullback. Therefore, it may be a better strategy to break the resistance and wait for the action. Prices are above the double accelerated moving average in the 4-hour period. The outlook is positive and bullish. 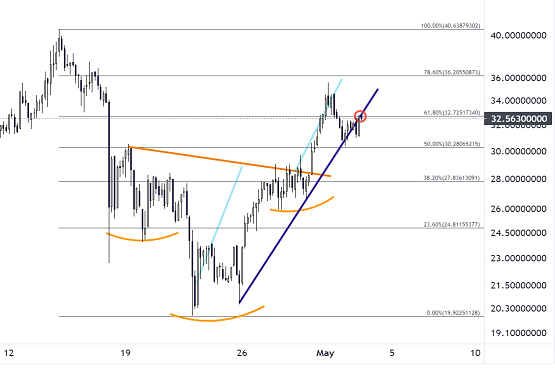 The XRP/USD parity is up 2.5% this morning, above the $1.60 level. At the hearing held on April 30, the parties have not yet announced a decision, and the emergency meeting of the SEC is expected on May 6. Then Ripple will make its own defense. Even though 1 billion XRP released from Ripple's wallets at the beginning of this month in XRPs that can be sold maximum from the Escrow cold wallet has not yet affected the prices, it creates a psychological pressure and causes the parity to consolidate on its support for now.

When the XRP/USD parity is technically considered, the parity is getting support from the $1.54 level, which is above the Fibo'61.80 zone, and is calm at a 3% band over price action support. In the 4-hour period, the Stochastic oscillator is signaling in the buy direction, while other oscillators are also positive. The first resistance for the parity is at $1.73, the cup-handle formation is at $1.83. 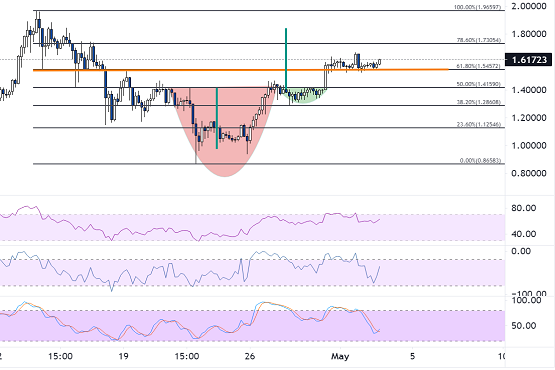 Litecoin is above the $277 level, up 3.4% this morning. HODL wallets are increasing their balances as their transfer volumes decline to their lowest in four months. Realized price targets are at the highest level of the last three years. We are still far from the all-time high for Litecoin, although it is among the major players in terms of monthly returns.

When the LTC/USD parity is considered technically, the prices analyzed in the daily period continue to move within the boundaries of the rising channel. The $286 will be the first resistance, followed by the $320 target, which is the mid-channel of the channel. In the daily period, the MACD confirms the positive intersection of the maturity lines with the accompanying bars on the buying direction. 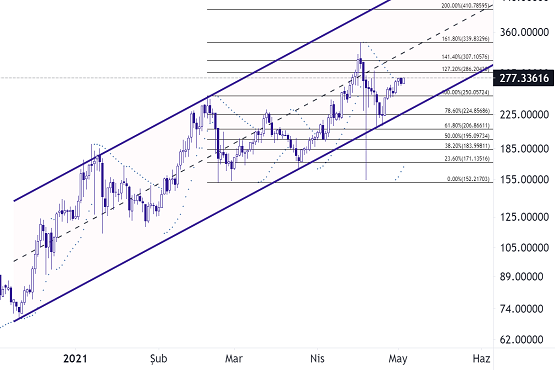 Chainlink is around $40.00, up 2.6% this morning. LINK, the largest token in terms of market capitalization with Ethereum consensus, lagged behind on a return basis after the Ethereum record. After reaching our $40.00 target for pricing, the $60.00 target continues. The amount of LINK locked in DeFi continues to increase.

Technically speaking, the LINK/USD parity completed the flag formation and managed to move itself into the $39.00 zone, the middle band of the rising channel. After completing its retest, it creates a new reaction from the channel midband. Unless there is a problem on the general market and ETH side, considering the risks, the parity can be expected to exceed the resistance of $41.00. Then comes the Fibonacci last slice at $44.00. The course is positive in the upward direction. 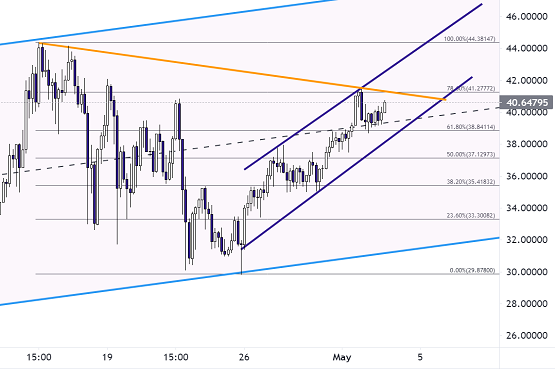 The BAT/USD parity is pricing at $1.28 this morning, up 1.8%. Although the lagging performance compared to the big ones does not change its direction, the pricing in the 1.28 zone and the formed TOBO formation show that it should be at the level of $1.52. With the breaking of the $1.20 zone, the TOBO movement in BAT has started. 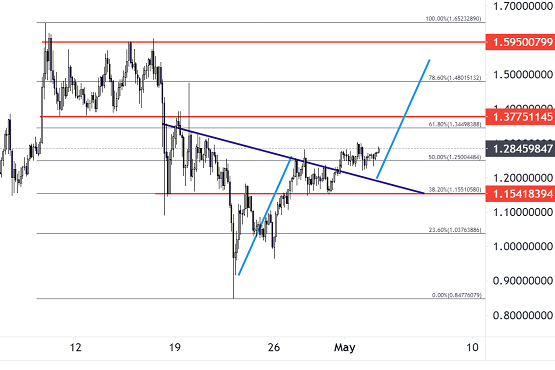