Interest rates on Ethereum options hit a record high on Thursday, according to data from The Block Research. ETH open interest rates had increased by 393% this year to $755 million on January 1st. A new record well above this level has been set on Thursday.

After the flood disaster hit the Sichuan region the previous week, a massive blackout was reportedly put in place for safety inspections. Some analysts point out that the blackout in the mining hub may be one of the reasons for Bitcoin’s violent crash.

CEO of Galaxy Digital, Mike Novogratz has stated that the Coinbase IPO has greatly stimulated the market, as evidenced by the XRP-based rise. Novogratz has also added that the market will continue in a good direction in the medium term with the new entities in the crypto world.

EC10, the institution behind the South African Crypto Index Fund, has announced plans to launch the country's first exchange-traded fund. The ETF is expected to offer South American institutional investors an indirect way of exposure to Bitcoin.

US-based Acker, one of the world's largest fine wine auctions, has announced that it accepts digital coins for auction payments and retail wine purchases. Acker executives have stated that they believe in the persistence of cryptocurrencies.

Brevan Howard Will Invest In Bitcoin

Asset management company Brevan Howard Asset Management has stated that it will invest 1.5% of its main hedge fund of $ 5.6 billion in digital assets. It is stated that the fund will invest in a wider range beyond Bitcoin.

Bitcoin is trading from $56,800 this morning, 1% higher than yesterday. The image weakening after approaching the $65,000 levels last week was pointing to the $59,000 level. However, some unforeseen circumstances and news impact drove the decline to $51,000 in 15 minutes. Yesterday, a total of 10.1 billion dollars of liquidity was experienced in the market, including $8.96 billion of BTC liquidation. The market value declined by around $300 billion. There have been rumors that the US Treasury Department is planning to punish many US financial companies on charges of smuggling money. In China's Sichuan province, a 48-hour shortage of power outages caused by the flood caused almost half of the Bitcoin network to shut down. The hash rate subsequently decreased from 180 Ph/s to 105 Ph/s. Stating that we do not find Coinbase's IPO positive for the market, we talked about the seesaw effect. The purchase of prospects and the sale of facts brought again an IPO and the classic downfall that came with it. Since the Bitcoin sentiment does not turn to the bear and the greed index is in the direction of buying, Bitcoin has recovered from the bottom, the continuous increase in funding rates, ASOL's being in the bullish line and the increase in the amount of BTC in wallets basically point to recovery.

When we consider the BTC/USD parity technically, it is trying to settle above the Fibo'61.8 retracement level past the $57,100 level. Momentum is also in the direction of breaking its descending trend in the 4-hour period. We are watching a V-turn in the parity, where we watch a clear recovery scene in these directions. The outlook is in the direction of recovery. The uptrend, it broke before the $59,200 level is now over. It is necessary to pay attention to this point in the possible pullback tab. Only the course can speed up and revive the market if it breaks the $59,200 level. Recoveries can be assessed in support zones. 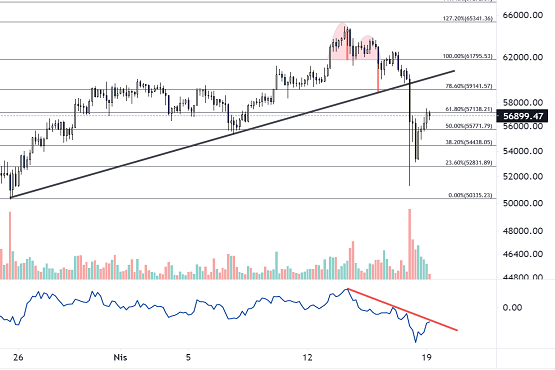 Ethereum is pricing at $2,260 this morning, up 1.2%. ETH, which dropped slightly below the $2,000 level after the general downward trend in the market, did not stay too low at this point and the number of new contracts broke a record. Another record news came from the amount of ETH staked for the ETH 2.0 update. The market project quickly stepped in in strong, well-established coins.

ETH/USD is technically in the bullish channel. The last decline was met within this channel and there was no sag under the channel. In the upswing, the $2,130 level was the intermediate support, while the $2,330 and $2,490 levels became resistance places, as well as the 30 and 7-day moving averages to become resistance. In the current situation, the uptrend in ETH has been hard, which indicates that the market finds its falling levels at discounted prices and that demand is coming quickly. The outlook is in the direction of recovery. Support-resistances should be looked at instead of prices, and the points where it holds and receives support should be subject to new transactions. 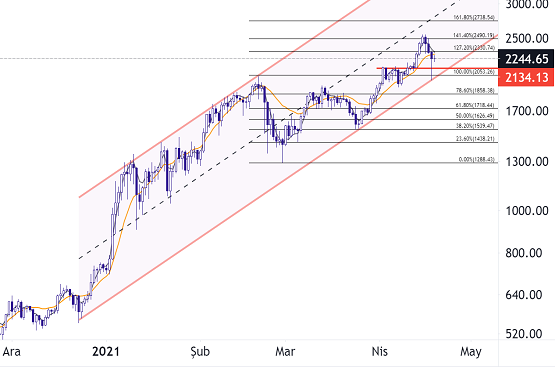 AVAX is up 2% this morning at around $30.00. Having a strong e-commerce infrastructure and focusing on growth in the DeFi sector, AVAX experienced price losses in a sellable course in the market during the weekend, when it brought 30% 4-hour candlestick closings. Prices found support at $28.00 in the Fibo'23.60 zone have not yet been able to hold onto the lower band of the $30.00 bullish channel. If it is $32.40 and above, the trend may be active again in the direction of buyers and a recovery close to 8% is required in the short term. The outlook is positive and in the direction of recovery. 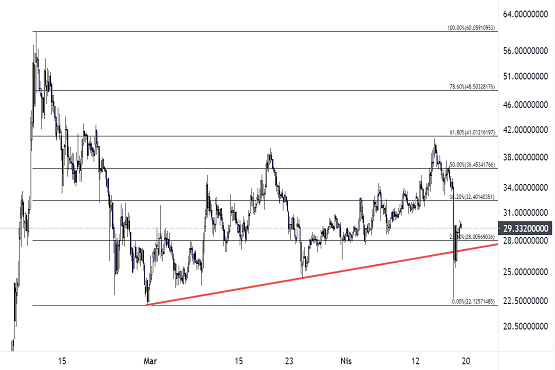 Ripple is becoming one of the most strongly responsive coins, with a 6.7% recovery this morning. The weekly return of XRP, which is at the $1.50 price level, has dropped to 2% due to weekend losses. Still, it is 7 points above Bitcoin. The monthly return is 188% and the sales volume for XRP, which is approaching $2.00 with its increase in a short time, shows that the expectations of HODL investors for XRP continue to remain positive. In addition, Galaxy Digital CEO Novogratz stated that he could not make sense of Ripple's rise, although after this rise, XRP made no sense for him. This could have a significant impact on the public and business people, not in a downward direction, but in the risk that the upward trend could slow down a bit because Galaxy holds an important BTC asset. Watching whale or high fund accounts is also considered a trading strategy for some investors.

If the XRP/USD parity is examined technically, the breakdown of the triangle pattern we mentioned in our daily bulletin on Friday took place and the decline target was completed with prices that loosen below $1.25. The parity is up 30% from the $1.17 levels. On the hourly chart, oscillators point to some stagnation in overbought zones. With major supports at $1.41 and $1.42, the $1.64 critical resistance for the parity will be decisive for the gains. In the short term pricing below 1.64 $, there may be flatness for the parity. 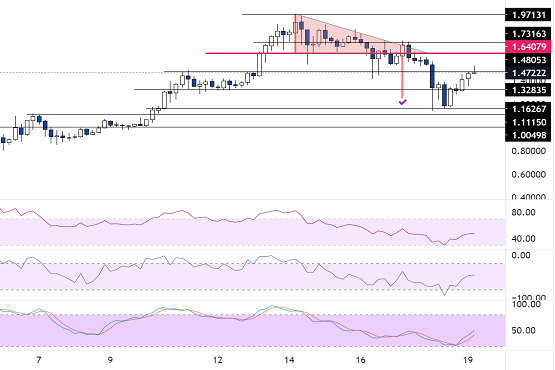 Litecoin is pricing in the $277 zone this morning, up nearly 1% from the horizontal. Weekend losses in BTC also affected the Litecoin side, with a 23% drop in 4-hour candlestick closings. Then, in the parity, accompanied by buying reactions, the monthly rate of return is still higher with 37 points and a monthly investor is profitable, it is impossible to talk about any declining trend. According to in-chain data, the successful transfer amount is at the top of the last three months, while the realized price is at the highest level in the last two years. This shows that the increase in market value and market expectation is supported under favorable conditions.

If the LTC/USD parity is technically taken into account, the breakdown of the $290 level should be followed, as prices in the zone near the middle band of the $290 bullish channel will close above this resistance level and will increase the buying appetite. $260 was the first support level, while the MACD and Momentum started to recover from the lows, decreasing the sales volume in the 4-hour period. However, the chart has not yet absorbed its losses after the decline over the weekend, and reactions are still weak. For this reason, the Parabolic indicator also points out that prices are still under pressure. 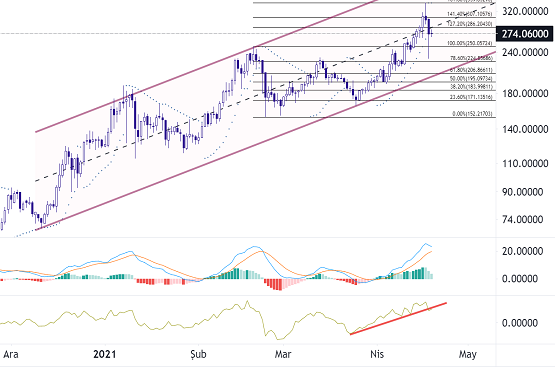 Chainlink is pricing around $40.30 this morning, up 3%. It has been one of the coins that holds the strongest trend in low liquidity and sellers created at the end of the week we left behind. In the new whitepaper published by the Chainlink team recently, the targets of the Chainlink 2.0 version in the DeFi market were announced. The team stated that it will increase its DeFi volume of $50 billion by 10 times and it will do so thanks to Chainlink. As we always emphasize, LINK, which is a value investment, has long-term and high-balance wallets rather than short-term trades, so its stance against hard sales is more resistant.

If the LINK/USD parity is examined technically, the parity continues its upward trend that it started as of March 25. With the downside break of the $40.40 neckline, the parity completed the double top target seen on the 4-hour chart and reactions were accompanied by the $33.00 zone. Buying reactions coming from the trend created a 25% recovery. The MACD short term line is in the bullish phase on the buying direction and Momentum is reaching the uptrend again. In the technical view, indicators that point to the end of the sales with sellers form a positive view. 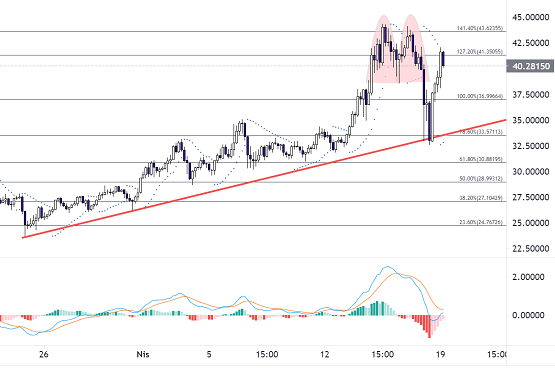 BAT/USD is following a recovery from the $1.38 level. In the general bearish scenario of the market, the prices, which were stuck in the $1.62 zone, were comfortably traced on the four-hour chart, and a general decline was observed as soon as they started showing signs of weakness. In the current market-like outlook in BAT, there is a V transformation. We are also watching the bottom return in active address sales in BAT. For this reason, we monitor the technical charts along with the recovered core values. In the 4-hour period, horizontal oscillators are not in the overbought zone and confirm the rise. If the outlook is positive and the $1.41 level breaks, further momentum can be expected for the gains. 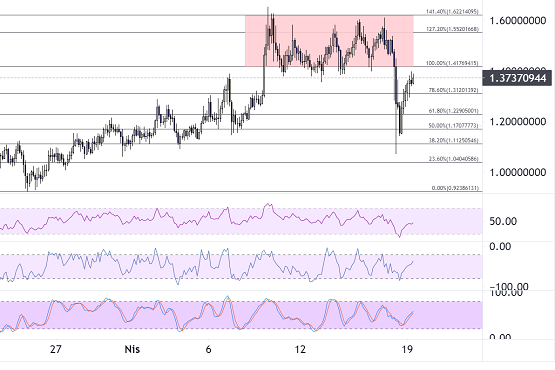