Ethereum Price Is At Its Highest Since May 2018

The second largest cryptocurrency by market cap after Bitcoin, ETH has surged nearly 10% last day and 33% last month. During this year, its value has increased by 355%.

The Number Of Bitcoin Addresses With At Least 1 Million USD Set A Record
The number of Bitcoin addresses holding at least $ 1 million increased by 150% to 66,540 addresses. These statistics show that after the Bitcoin price peaked and exceeded $ 20,000, the BTC addresses of previous miners were instantly converted to millionaire wallets.

Entering the Market of Institutions Reduced the Impact of Whale Movements
While the sudden sales of Bitcoin whales caused sudden breakdowns in the price in the previous periods, the Bitcoins sold with the entrance of the institutions to the market started to be bought by corporate companies. In this way, possible speculative movements were reduced to a minimum.

Stablecoin TUSD Coming to Avalanche (AVAX)
With the integration planned to be completed in the first quarter of 2021, TUSD will become the first US dollar-indexed stablecoin on Avalanche. True USD stands out as one of the 5 largest "stablecoins" in the cryptocurrency market.

Over $ One Billion Worth ETH Invested In Ethereum 2.0 Deposit Contract
After the Ethereum 2.0 update, the stake (locked) amount has exceeded 1.5 million Ethereum so far. Its value in dollars exceeds one billion dollars. Since the contract does not have a closing date, investors can perform staking transactions in ETH 2.0, as well as earn rewards in proportion to the amount they stake.

CME Announces Ethereum Futures
Almost exactly three years since the start of Bitcoin futures, the Chicago Mercantile Exchange (CME) announced that Ethereum futures will be released on February 8, 2021. The addition of Ethereum futures with increasing customer demand will provide a valuable tool for cryptocurrency transactions.

A new level was added yesterday to the record news of Bitcoin, which we have been used to hearing for the last two days. Bitcoin was trading at $ 23,100 this morning, while the record level was refreshed at $ 23,780. Entry to Bitcoin is still in progress. Purchases in the last 24 hours from the Grayscale fund yesterday reached 1700BTC. In addition, the continued entry to the stock markets and the decrease in the circulating BTC supply also show that it is on the right track. Despite Bitcoin's record news, Bitcoin, which scored 16 points in Google Trends searches, had 100 points at the 2017 peak. It shows that Bitcoin, which is still less popular at these price levels, has a long way to go and is open to new entries with its increasing popularity.

When we consider BTC / USD technically; He made the break of the triangle formation in the range of $ 16,000-19,500. The triangle has completed its goal by corresponding to the 22,700-23,000 range. In addition, the newly created pennant formation, as a continuation of the rise, points to $ 27,400 when the distance is taken as far as the pennant length. It is useful to follow the withdrawals of the day in lower periods and to follow the levels they find support. Because breaking the support downward can also allow you to take quick action, and it can help you to be cautious before new transactions or damage occur. 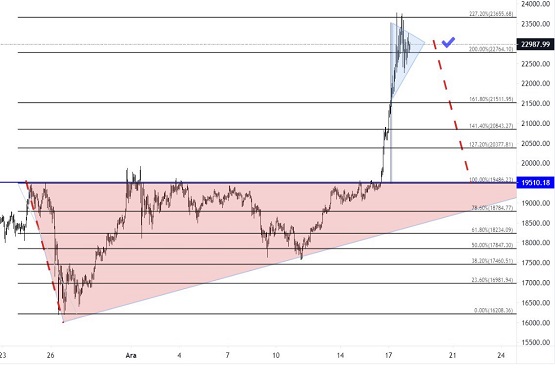 Ethereum continues its rise, which started the previous day under the leadership of Bitcoin, with the addition of the weak dollar. We think that the rise in ETH, which is traded at $ 640 this morning, is led by Bitcoin and 2.0 pricing has not started yet. However, money entries to DeFi tokens, which are included in the Ethereum infrastructure, rose to $ 16 billion. This may be a preparation for the rise in the future. Therefore, the Ethereum front may have the ability to move as Bitcoin dominance begins to decline.

When we take the ETH / USD technically, the bullish channel is broken up. With the breaking of the $ 630 level, a new phase was entered on the chart. In this phase, there is no significant resistance in the $ 630-710 range. Also, the formed pennant pattern may continue as long as it does not break down to $ 630 and may technically point towards the pennant size, ie $ 890. As long as it does not drop behind $ 630, this pattern can continue. 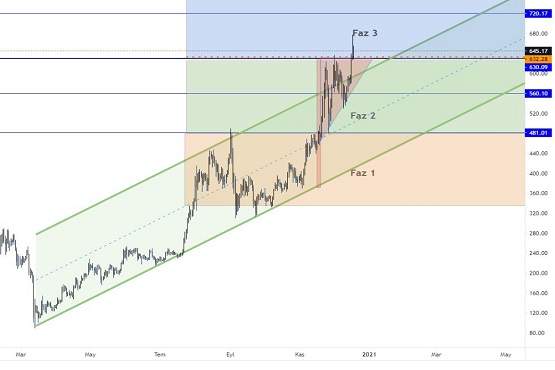 AVAX / USD is trading at $ 3.4039 this morning. Avalanche announced that it will cooperate with a signal platform. There has been no recent news of the expansion of the Avalanche platform, nor of the rally of BTC / USD. 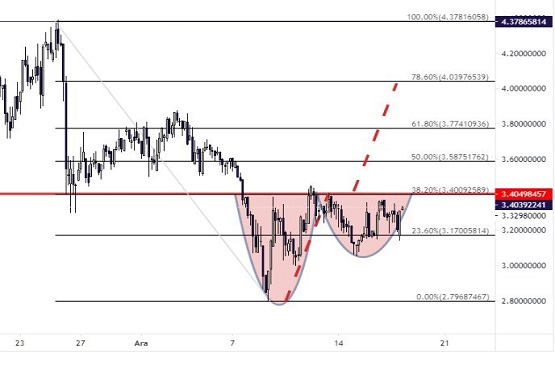 Ripple is moving around $ 0.59 this morning, rising around 1%. It continues to build strong partnerships with Ripple's traditional financial system. Ripple's partners include Japanese giant SBI Holdings, one of the leading US financial institutions Bank of America and Banco Santander. With its increase in institutional cooperation and large-scale partnerships, it caused an increase in demand for Ripple, which is used both as a payment and transfer tool. It is expected that corporate agreements will increase in Ripple and continue its positive course with new projects. 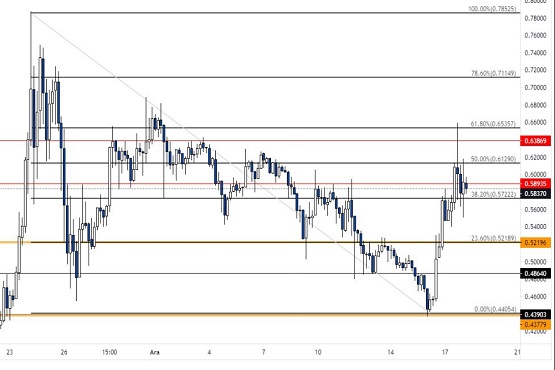 Litecoin is moving near $ 108, up about 7% from yesterday's transactions. According to Glassnode data, the number of new addresses reached the highest level in the past nine months. The increase in Litecoin price also caused an increase in demand. Litecoin MVRV Z-Score rose to 0.769, the highest level in the last 1.5 years. This increase indicates that transactions are made at a higher limit than the market price, especially with the increase in demand and the buying pressure in prices. Litecoin transaction volume reached the highest level in the past nine months. In Litecoin, where the developments in demand are followed, the main party positively affects LTC. We see that the short-term market sentiment has disappeared. It provides a positive indicator in terms of the longer term volatility of Litecoin's value.

When we consider the LTC / USD technically, it was priced around $ 92 in yesterday's transactions, while it was up to $ 113 with the rise in the morning hours. In the last day, it formed a 25% movement slice. A double bottom was observed in their retracements to the $ 25 level in March and the retracements to the $ 42 level in late September movements. If LTC / USD continues to increase due to the formation, if the possible increase continues, $ 120 comes to the fore. 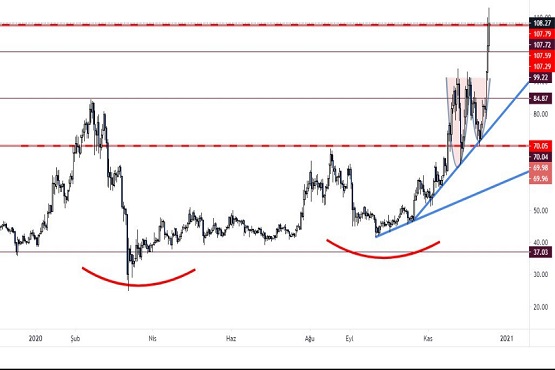 LINK is moving around $ 13.65, up about 2% compared to yesterday's transactions. LINK / USD's correlation with BTC / USD dropped to the level of 0.15 at the 0.16 correlation level, and due to this situation, it could not benefit enough from Bitcoin's rise. Especially after Ethereum 2.0, after the mobility and the increase in smart contracts, the demand for LINK also increased. With the increase in demand, it can offer a positive effect to LINK (Chainlink).

Technically, LINK / USD continues to move above the $ 13.50 level in the middle band of the channel within the rising channel that has been going on since September. After rising to $ 14.55 in yesterday's movements, LINK / USD retreated back to the $ 13.60 target zone after the TOBO outlook formed in a four-hour period. The supports of the bullish channel, $ 13.50-13.00, could be considered in possible retracements. In transactions above the upper resistance band of the channel at $ 14.10, a dynamism can be observed in the $ 14.80 region. 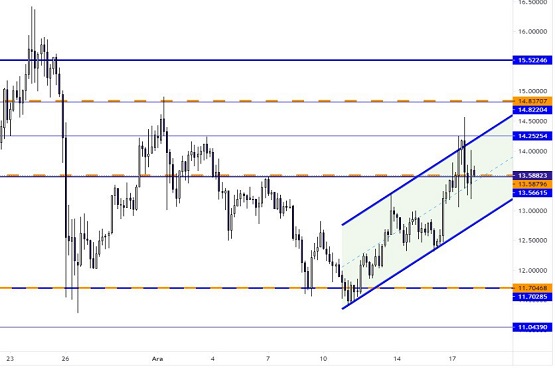 BAT / USD is trading with gains close to 2% from the $ 0.2290 level this morning. Technically, we continue in the bullish channel in BAT / USD. Although BAT / USD cannot benefit much from the bitcoin movement, it continues with more horizontal but rising steps. Still, while the LINK-Bitcoin correlation is 0.15, BAT-Bitcoin has a higher relationship with 0.22. Therefore, as long as there is no return in Bitcoin, a bullish channel movement can be expected in BAT as well. You can also review my Bitcoin analysis. Technically, the returns seen from the channel subband levels are open to technical evaluation. 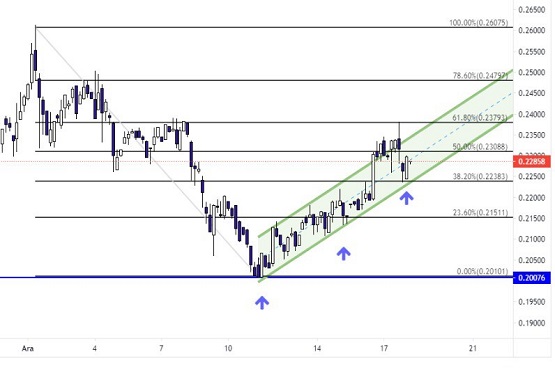