SEC Goes To Change Regarding Ripple Case
Ripple's legal counsel, Stuart Alderoty, said in a statement on Twitter that the SEC is amending the Ripple charges. Aderoty explained that there is only one legal claim left, and whether it is only certain distributions of XRP an investment contract.

RippleX Vice President James Wallis stated that they are negotiating with Central Banks for the XRP partnership, after Ripple CTO recently announced that they were working on XRP-based applications.

The Swiss Confederation has announced that the Zug canton will accept Bitcoin and Ethereum for tax payments. Citizens will be able to pay by scanning the QR code from their cryptocurrency wallets. Later, these payments will be converted into Swiss francs with the contracted intermediary company and accepted as tax payments.

A cryptocurrency exchange with a total volume of over $ 1 billion has announced that it will stop XRP transactions. According to the statements made by the General Manager of the Exchange, it was stated that due to the risks involved in the lawsuit between Ripple and SEC, the path will be followed according to the outcome of the lawsuit.

Bitcoin is trading sideways with slightly sellers at $ 51,350 this morning. Two important news in the last two weeks' yield performance: Tesla announced that it would buy $ 1.5 billion in BTC and MicroStrategy raised it to $ 900 million and organized the bond auction to buy BTC. However, the price-metric mismatch in terms of new participation in the market and new liquid transfer puts forward a short-term correction scenario for Bitcoin. While the number of active and new addresses decreases, the price increases are inverse metrics. 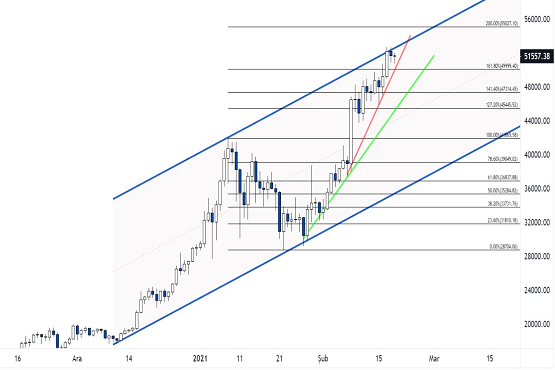 Ethereum is counting to $ 2000 with transactions at the level of $ 1915. While Ethereum displays a stronger outlook than Bitcoin, the decline of BTC dominance to 60.5% offers a positive course for Ethereum and other altcoins. The relatively lower mining fees in Ethereum metrics, as well as the increasing number of active and new addresses, point to the growing Ethereum consensus. At the end of the month, there are expectations that the graphics cards used by most Ethereum miners will be released, which could significantly reduce network density, lowering miner fees and shortening times. So basic and chain metrics for Ethereum support the bullish arguments.

When we consider ETH / USD technically, the rising triangle seen at the beginning of the year and broken at the beginning of February in the pair, which is in the upward channel, points to $ 2060 levels. In the current situation, while the middle band of the channel passes through the level of $ 1850, it can move towards its target and new records as long as this level is not broken down. 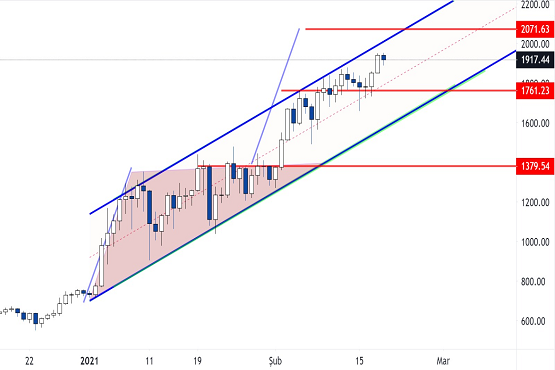 AVAX is pricing in the $ 39.80 region this morning with a 3% retracement. In the days when the market was more buoyant, we saw AVAX records and then hard retreats. The biggest reason for this situation was a node error in the pangolin update. Although this negative situation has been corrected by the developers of the Avalanche platform, this time there is another handicap for AVAX. AVAX locks, which will be opened on March 9, will allow the sale of AVAXs that are given as a reward for keeping them within a certain maturity. Thus, a substantial increase can be seen on the supply side. On the other hand, PoS coins gained 20% on average in 7 days, while AVAX remained discounted with 24% loss. In this case, the convergence of AVAX and other PoS coins may be positive on the AVAX side.

When we examine the AVAX / USD parity technically, we see that the reaction from the descending trend zone brought about 20% positive price action, but the following horizontality caused this move to remain limited between $ 37.00 and $ 43.00. For prices above the Fibo'50 slice, ie $ 37.00, this is the strong support zone and will be followed during the day. Although the oscillators we use do not give a positive signal due to the horizontality, they are stripped of the negative region. The upward reversal signal of the Stochastic oscillator and volume increases should be watched. 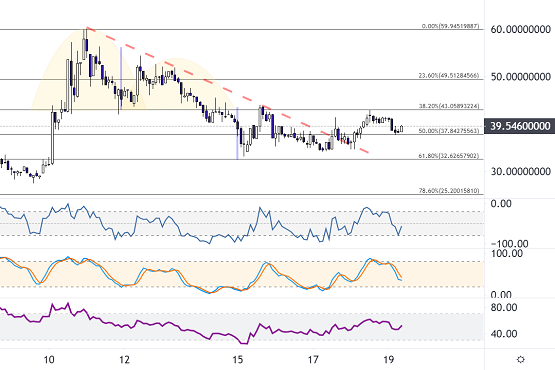 Ripple is pricing around $ 0.5300 this morning with a horizontal change. A recent change has been made in the case filed by the SEC with Ripple, which alleged XRP is a security. The market is split that this is against and for XRP. Nevertheless, this controversial situation may continue until February 22, the day of the trial, or even in the longer term, until the decision phase. On the other hand, Ripple executives stated in their statements that they are in cooperation with Central Banks and that XRP will take part in CBDC studies. When the mentioned situation is realized, we can see that XRP is priced positively with this news. But first, the situation regarding XRP needs to be more transparent.

When the XRP / USD parity is analyzed technically, it is seen that there are sags below the trend at the $ 0.5200 level. This represents the instability in XRP and short-term spikes. Thus, the pair followed a more flat course, not staying above the $ 0.5400 trend support. Prices around the $ 0.5330 support may have a chance to react, but we are not getting strong signals from the MACD and momentum yet. 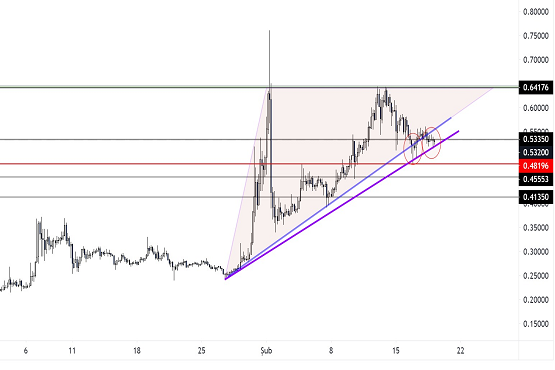 Litecoin is pricing at $ 232 this morning, up close to 3%. Bitcoin has been the pioneer of Litecoin lately because we see that price increases primarily occur on the BTC side. It is noticed that, confirmed by the number of wallets and new address data, a part of the capital from altcoins is directed to Litecoin along with Bitcoin. However, unless this increase in Bitcoin is confirmed by chain data and there is no news-based change, the expectation of a short-term consolidation period leads to a similar scenario for Litecoin. Considering the chain data, the recipient addresses that made successful transfers reached the highest level of the last three years. This shows that the transaction volume and interest are not withdrawn from Litecoin.

When the LTC / USD parity is analyzed technically, it is seen that the upward reaction given by the deterioration of the horizontal at $ 144 on February 8 has shown a steady increase. The $ 231 level in the Fibo'61.80 correction is just above the current pricing as a resistance zone. Making this level a difficult support zone may be very positive for the pair, but we will see at least 4 hour 4 candles close on this zone. In possible retracements, the horizontality between $ 186 and $ 231 could make the pair more suitable for short-term positions. MACD and momentum are not giving strong signals, we see that the volume is not high for now. 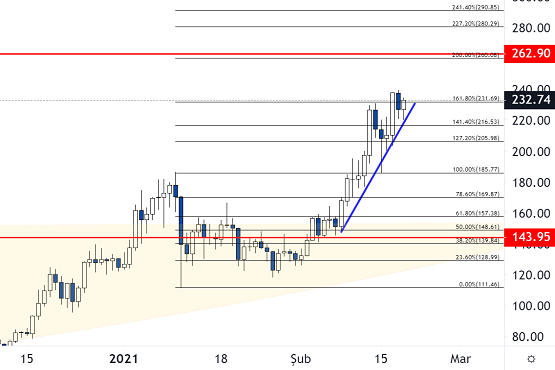 The LINK / USD pair is pricing at $ 32.70, with a horizontal increase in the morning hours. Chainlink has generated a return of close to 180% since the beginning of 2021. Market-wide sales pushed LINK away from the peak of $ 35.70, but short-term sales have not suppressed the upward trend in the long term. The capital inflows experienced by the altcoins can turn the LINK rise in favor of the bulls again, as the risk appetite increases. When looking at the on chain data, it is seen that the token supply on the smart contracts in Chainlink has reached the highest level of all time. This may support the rise on the LINK side for the market diversifying on the basis of new tokens.

When the LINK / USD parity is examined technically, it draws attention that the horizontality between $ 30.30 and $ 34.60 is not deteriorated, but movements on the hourly chart are in a narrower area. The involvement around $ 32.60 may have caused indecision by buyers and sellers. For a more positive course, this region should be overcome and the middle band of the channel, which is $ 33.70, should come to the agenda. Since the oscillators used are far from resistance levels, the outlook is positive on the indicators side. 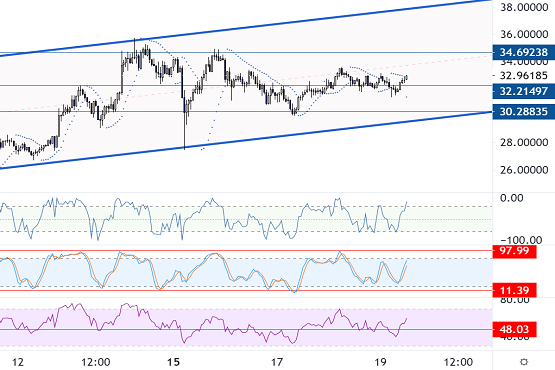 Basic Attention Token is retracing 1% this morning and pricing in the $ 0.6270 region. The upward break of $ 0.6150, which corresponds to the Fibo level of 61.80, showed that no confirmation was received for the double top, thus avoiding the double bottom target reaching the $ 0.4000 region. On the other hand, the flag formation he created gave the signal to start as well, as the $ 0.5900 flag zone and then the above-mentioned Fibonacci retracement have been victorious. The target zone of the BAT / USD chart is around $ 0.9000 and if we want to calculate it mathematically on maturity basis; Basic Attention Token, which has an average daily volatility of 5%, is expected to have a maturity of approximately 15 days. However, this mathematical calculation was created by ignoring the possible developments in the macro section. Towards the $ 0.9000 region, the percentage potential is around 40%. 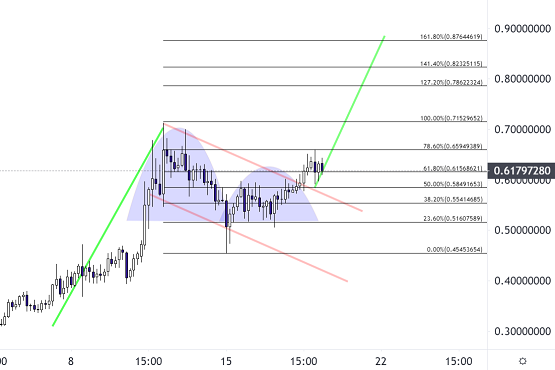