On Sunday, the slowest trading day of the week, Ethereum, one of the leading crypto currencies, broke the $ 700 band. The fact that Ethereum miners' balances reached the lowest level in the last 2 years and the amount of ETH open to trade in exchanges decreased to the lowest level in the last 1.5 years, eliminating the possibility of voluminous sales for ETH, increasing the confidence in the product.

Greenpro Capital, traded on Nasdaq, said in a statement that they think that leading cryptocurrencies such as Bitcoin and Ethereum will provide better returns. Stating as "Bitcoin is a store of value", the company announced that it will invest $ 100 million in Bitcoin in 2021. Company shares increased by more than 100% after the announcement.

After the U.S. Securities and Exchange Commission (SEC) filed a lawsuit against Ripple and its two executives and claimed that XRP was a security, XRP, Coinbase, OKcoin, Bitstamp were also excluded from the list and all transactions were suspended.

The First Local Company to Add Bitcoin to its Reserves Appears

Turkey's largest investment companies of which one is a tributary of the Main Principles Ventures Holding, became the first domestic company that Bitcoin investment. The company announced in a statement that they bought Bitcoin at $ 6,500. Announcing that 80% of the company portfolios were positively affected during the Kovid period, the company gave the message "More investment in technology"

Companies investing in Bitcoin from all over the world hold a total of 1.15 million Bitcoins in their treasury. When the published figures are examined, the amount of Bitcoin in the treasures of 29 companies corresponds to 5.48% of the current Bitcoin supply. The company with the largest Bitcoin reserves, MicroStrategy, alone holds $ 1.8 billion worth of Bitcoin.

There has been a significant increase in demand in the Bitcoin derivatives markets in recent months. As Bitcoin spot prices saw peaks, volumes in Bitcoin options markets also increased significantly. Additionally, researchers reported that some futures were traded at $ 30,000 in June 2021.

Regional reports from China have shown that there are problems in Bitcoin production due to the country's mining equipment and component shortages, as well as problems with power outages. The difficult conditions that the country where the world's largest mining facilities are trying to deal with can be another reason that will trigger the Bitcoin shortage.

With Bitcoin prices breaking a record, BTC market cap exceeded $ 500 billion. It became the 11th largest asset, beating a payment giant like Visa. The top 10 include the world's largest assets such as Apple, Amazon, and Tesla.

Bitcoin is trading this morning at $ 26,200 with around 2% sellers. The news that Ripple will be unlisted on Coinbase, Okex and BitStamp, which arrived late last night, put pressure on the market in general. Nevertheless, the previous teachings showed us that; As the SEC would not include Bitcoin and Ethereum under the scope of the review, the fund from Ripple had a positive effect on both cryptocurrencies, especially Bitcoin, and the funds were transferred to this side. Therefore, we do not think that the pressure of Ripple news on Bitcoin and Ethereum is long-lasting.

When we consider BTC / USD technically; The double top view, which exists in the range of $ 28,400 - $ 25,800, has become more evident. Because we stated in our comments yesterday that we expect a correction in the range of $ 25,000-26,000. However, if the $ 25,800 support is broken, the target here could extend towards the $ 24,000 levels. For now, we prefer not to prioritize the double hill expectations before the breakage approval, considering that our scenario is realized since the movements are not weak. The look is horizontal and slightly vendor-like. 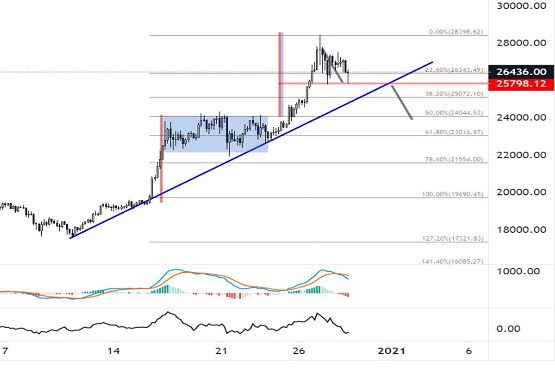 Ethereum is trading above $ 700. The amount of money locked in DeFi (decentralized finance) tokens has reached $ 15 billion. However, although Ethereum loses value against the dollar due to the Ripple news, the similar scenario we have drawn for Bitcoin is likely to be for Ethereum. It seems likely that funds from Ripple will enter BTC and ETH, the biggest ones in the market.

When we consider ETH / USD technically, the double bottom formation that stands out in the weekly chart was realized by testing the $ 740 level, and we reached our two-month target. In the near term, the range of $ 670-680, the old high to the new support, is important major levels. The uptrend is also past $ 650, but the retracements are slow for now. Such corrections should not be interpreted as Ethereum falling, but should be considered necessary for the health of the trend. Therefore, supports should be monitored in terms of possible upward reactions in withdrawals. 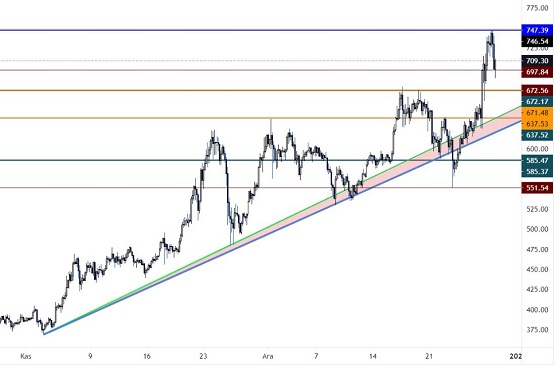 AVAX / USD parity is priced at 2.92 levels with a decrease of 1% on the second day of the week. Although the support from the $ 2.80 level is on the upside, it has not reached the $ 3.2 Fibo'23.60 level yet. If it leaves the horizontal motion, we will follow the $ 3.2 band in upward moves. But as of now, there is no recovery in sight in the AVAX / USD parity. Major continues to remain in the descending trend. We are following the weak course in the parity with a downward trend. 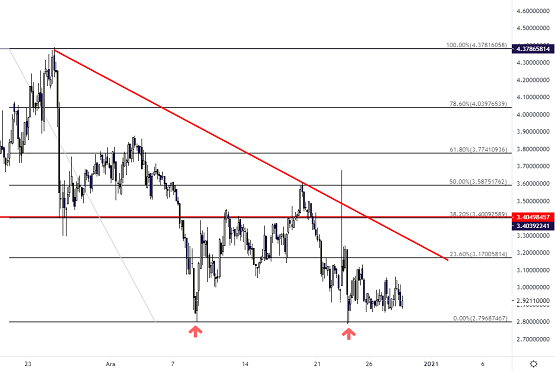 The initial price reaction was a 20% drop after the news that Ripple would be distracted by the Coinbase exchange, which arrived late last night. With the news, it will not be traded on OKcoin and Bitstamp exchanges as of January 19, and only custody will be available in these exchanges. If Ripple had paid a certain amount of compensation, as in the Telegram case, the worst would have been priced. But in the current scenarios, we're where the worst of Ripple's outage is happening, and it says whether cross-exchanging Ripple's delisting would have a domino effect. Therefore, we may not have seen the worst in pricing.

When we consider XRP / USD technically; It is trading near the $ 0.23 level with a 7% loss in pricing this morning. With this withdrawal, Ripple has given the premiums it has received since October. A large double top formation with a high of $ 0.78 points to the $ 0.17-0.20 range. We cannot say that the selling pressure for Ripple is over. We made a graphical explanation of where to go question on youtube at Kripto Zoom. If we need to refresh the information in writing, the big drop in March 2020 fell to $ 0.11. For now, the downstream impact of the movement in XRP / USD, which only gives back the premiums it has received, includes potential formation. For this reason, we can warn our investors to be cautious about the XRP that we excluded from the scope of the research. 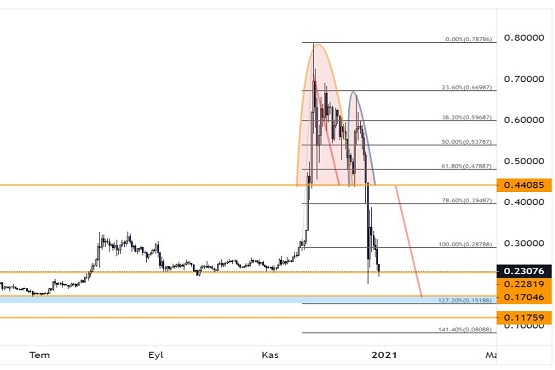 Litecoin is down 2% this morning, pricing at $ 126. Although its monthly returns are quite high compared to Bitcoin, it is experiencing a 1.5% drop in its weekly return. Due to the high correlation with Bitcoin, we will be following the pioneering movements for Bitcoin in the technical view.

When we examine the LTC / USD parity technically, we see that Litecoin, priced at $ 126, formed a double peak formation appearance with a small retreat after its peak at around $ 140. We will also be following the mid-band of the bullish channel at $ 124 in order for the pattern to confirm. If it breaks down this level, we can predict that the double top formation will complete itself around its target of $ 110. In case of confirmation, the double top formation that does not approve may remain within the limits of the upper band of the channel in possible upward reactions and bring the level of $ 140 to the agenda. We find and continue to like the LTC / USD parity, which has an increasing potential in the medium term. 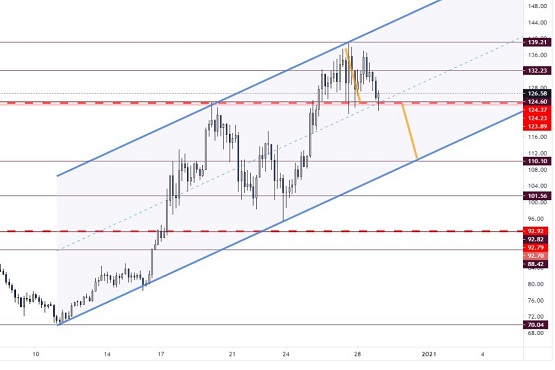 We can say that the LINK / USD parity decreased the downward trend with the recovery moves after the sharp decreases. Although the developments between the SEC and Ripple affect pricing negatively, we have stated that Cahinlink is an Ethereum consensus product and the SEC does not pose a threat to the product. Therefore, a conclusion against any of the parties does not support the rumors about Chainlink for now. On the other hand, we can witness positive developments in the long term under the leadership of liquid entries to the ongoing stock markets. With the movements on the Ethereum side, the ETH-LINK shears can also be narrowed.

When we look at the parity from a technical point of view, we see that the course within the downward channel boundaries continues in LINK / USD, which is priced at $ 12 with a 4% depreciation. Although its stance is considered weak in the technical outlook with a decrease in monthly yields, upward moves are possible if it can hold the level of $ 11.4. For the bullish channel to come back to the agenda, we should wait for the $ 13.5 level to be exceeded. Nevertheless, movement may begin with his exit from the descending channel and breaking up the $ 14 level, which is the upper band of the channel. Although it has potential in macro view, it seems that the course is weak technically. Below the $ 11 level, we are witnessing that the market purchases react, but for now, persistence is not achieved. 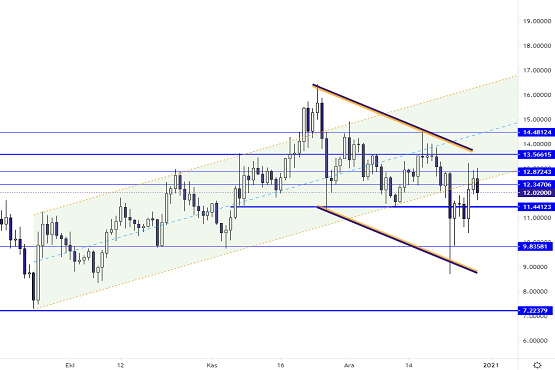 The BAT / USD pair is currently down 2.5%, pricing around $ 0.20. The pair is trying to maintain permanence in the bullish position between the two trends by holding in the sagging zone. Although it is possible to react at positions above both bullish channels, the mentioned trends at 0.2030-0.2090 will be followed for now. The look is weak and the cruise is horizontal. 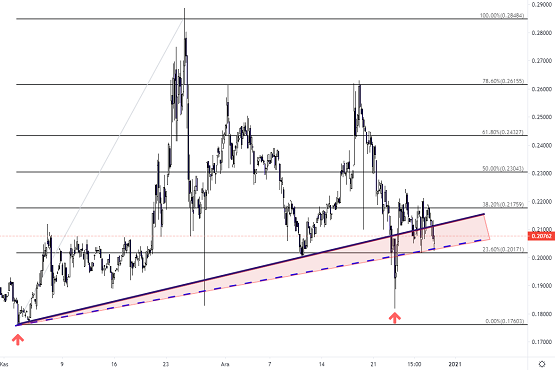