Four ETH improvements will be implemented at the mainnet launch, which is expected to take place on April 14. Ropsten, the first test net to be upgraded, is scheduled for March 10th. The Goerli and Rinkeby networks are expected to be upgraded in one-week increments on March 17 and 24, respectively. And for the mainnet, they are suggested to upgrade to a Berlin compatible version before April 7th.

Malaysia-based BCMG Genesis Bitcoin Fund became the first institutional and official Bitcoin fund in the Southeast Asia region. According to the statements made, the fund was decided to be launched in line with the increasing demand for cryptocurrencies in the Asian region.

Payment giant PayPal is officially purchasing cryptocurrency company Curv to boost crypto asset ventures. PayPal executives said in their statements that buying Curv is part of an initiative to invest in talent and technology.

Institutional Buyers Invested $ 200 Million
NYDIG, one of the companies that mediate the acquisition of Bitcoin by institutional companies and banks, announced that it has received a $ 200 million investment with the BTC investment series. Big names such as MassMutual and Morgan Stanley are among the investors. "With these partnerships, there is no doubt that the institutional investor has entered the Bitcoin market," NYDIG CEO said. he stated.

The Number of BTC in the Stock Exchanges Is Decreasing

According to data from chain data provider Glassnode, the number of Bitcoins held on central exchanges has dropped by about 20% over the past year. This shortage of supply created in the stock markets shows that BTC investors are holding their investments into cold wallets for a long term.

Ripple CEO Brad Garlinghouse stated that even if Ripple company disappears due to the SEC case, XRP will continue to trade. In addition, Ripple stated that they signed 15 new contracts with central banks in the period after the SEC case was opened.

The report released by CPA Australia, a professional accounting association in Australia, writes that the Federal Reserve is discussing Ripple and XRP as a possible platform for the digital euro.

According to the statement made by financial data company Bloomberg today, 5 more altcoin data will be listed on the Bloomberg Terminal screen. Coins listed include Chainlink (LINK) and Stellar (XLM).

America's giant financial services company Charles Schwab has started negotiations with various cryptocurrency companies to provide digital asset services. The company, which manages $ 6.8 trillion in assets, announced that if the negotiations are positive, the new services will be operational by the end of the year.

Norwegian-based company to invest in Bitcoin

Norwegian industrial holding company Aker ASA announced that it has established a new company to invest in BTC and blockchain with a capital of $ 58.6 million. According to the press release, the new company will keep all its liquid assets in Bitcoin.

Public mining company Argo Blockchain purchased 320 acres of land in Texas to expand its mining operations. The company stated in its statements that the existing mining capacity will increase significantly.

Bitcoin is trading on the second day of the week with a 3% gain at $ 54,000 levels. This time the rise from Bitcoin's most recent $ 52,000 peak is based on more solid metrics. First of all, the change in the number of new and active accounts in the last 24 hours is 19% and 8%. The decrease in the amount of BTC held in the exchanges continues. Norwegian Aker announced that he will buy approximately $ 60 million Bitcoin. Paypal buys custody company Curv. It is not known whether a new FOMO can start in Bitcoin, where the interest of institutions is increasing, but we have started to see the positive contribution of the recent news. With the decline of the USA 10 years, the market breathed more easily than the previous days.

When we consider the BTC / USD pair technically, the downtrend from the $ 58,000 record level has been broken and has come to an end. Purchases gained momentum with the $ 52,500 high being broken. For now, we think that if the movements support this region, the buyers in the 58 thousand region can be appetized. That's why a nice technical appearance is currently being priced. The MACD is in the buying zone and Parabolic is in the buying direction. It needs to break the $ 56,000 level to accelerate further gains. The outlook is bullish and positive. 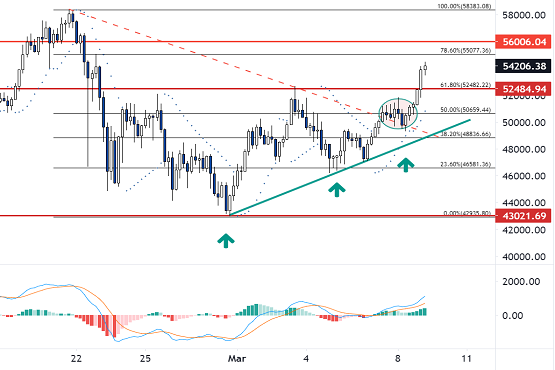 Ethereum hit the $ 1860 level after its rise yesterday and is trading early in the day with some profit selling this morning. Although the dominance of Bitcoin in the ETH-BTC clipper was reopened to over 60% today, the overall course did not deteriorate. Whether or not the dominance is constantly increasing will be monitored, but the number of wallets containing ETH, the number of active and new accounts support the rise of ETH. Before the Berlin Update, Ropsten, Goerli and Rinkeby tests will be available on the Ethereum network until April 14. The first trial starts tomorrow. However, we know that after the release of the EIP 1559 improvement, the network will record a significant path for 2.0, but we do not think it has entered pricing.

When we consider the ETH / USD pair technically, the TOBO target that is formed points to the $ 1960 level. With the breaking of the downward trend, a major obstacle to ETH was removed. The trading volume has also exceeded the average of the last 30 days. The MACD is also increasing its momentum in the positive zone. So, the outlook for Ethereum is positive, while the retracements will follow the Fibo'50 retracement of 1670 and $ 1750 intermediate supports. 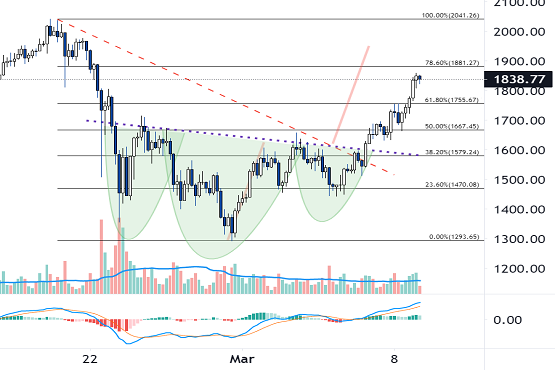 Avalanche has increased its market value by 44% today, with the addition of locked AVAXs in various protocols to the circulating supply. Increasing market value was directly proportional to the increasing amount of AVAX. Prices have not eased significantly for now. As we mentioned before, the fact that approximately 42 million AVAX unlocked are released in wallets ready for sale does not actually mean that AVAX owners will sell their assets. Value investors can afford to wait for a coin that reaches $ 60.00. Likewise, this would be more reasonable for high returns, as seen in the previous unlocking of AVAX. In the unlocking process that took place on December 8, there were some sales in a week, and although it created a 20% retreat in prices, it is seen that the returns were quite high when cleared from the short-term process. On the other hand, for Polkadot, which is described as Ethereum counterparts, AVAX, which is behind Algorand pricing, withdrawals will create a perception of opportunity for value investors.

The AVAX / USD pair is circling the $ 24.80 zone in the Fibo' $ 62.80 zone and the upward and downward reactions from there remain weak. Although the downtrend has left a more flat course, there is no strong data yet for a voluminous increase. In case of possible easing, the old reaction zone of $ 22.00 may be on the agenda again. For now the view is horizontal. 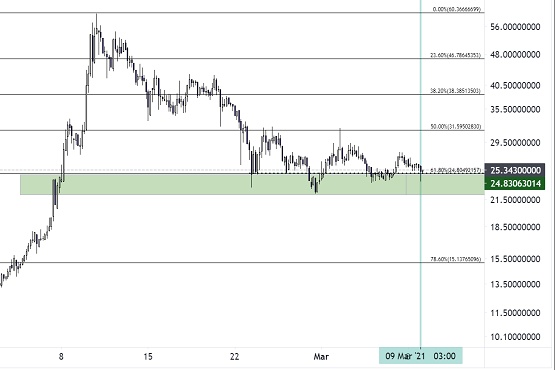 Ripple is up 1.50% on a daily basis this morning. The statements made by Brad Garlinghouse, one of the founding partners of Ripple, were received very positively for XRP investors. He announced that in the period after the SEC filed a lawsuit against Ripple, it signed 15 new contracts with Ripple central banks. This actually shows that Ripple has faced securities charges by US regulators, but Ripple still sees significant value in other countries of the world, where 95% of XRP investors are located. Later, an official agency in Australia published the statement that the euro zone, the number one rival of the dollar, negotiating with the Central Bank (ECB) for the digital euro.

The XRP / USD pair carried its response above its next resistance at $ 0.47, after breaking past the $ 0.43 level in the Fibo'23.60 tranche. Thus, the horizontality between $ 0.43-0.47 was broken. There is also a minor upward movement, with the reactions of the lows being met in the higher zones each time. The first resistance for the pair will be at the $ 0.50 level. In the daily period, the Bollinger bands formed a squeezed image, which signals an accelerated movement with the opening of the band wings. 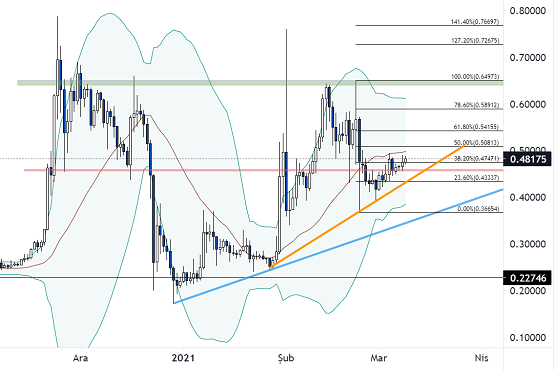 Litecoin has increased its price by 3% this morning to $ 198. When the monthly performances are examined, it is seen that Litecoin has a 9% upward potential compared to BTC. The downside retracement of Bitcoin dominance could create a bullish opportunity for Litecoin, which is still far from its 2017 record of $ 420.

When the LTC / USD parity is examined technically, it is seen that the $ 204 level, which was previously tested but where pricing has evolved into a selloved trend here, is retested, but it is returned. But the MACD, momentum and CCI indicators are rising on the positive side over the four-hour period. If the $ 204 level breaks, the pair could relax and begin its journey to the next resistance level of $ 246. On a weekly basis, the double bottom target of $ 270 is maintained. The outlook is slow but positive. 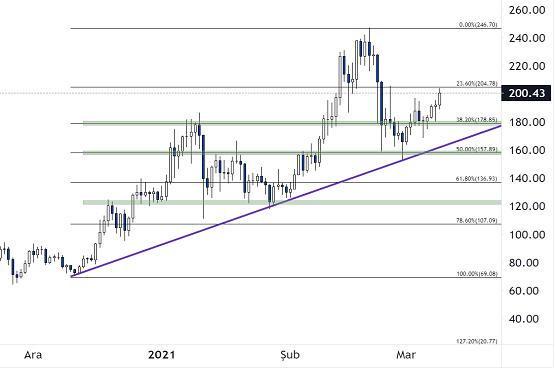 Chainlink, which is traded around $ 31.23, is the second highest trading volume of whale accounts in the last 3.5 years. The metrics that follow the transactions of large accounts, which we call the whale metric, show that the highest volume of transfers in recent years have been made by LINK. The amount of smart contracts created on LINK has set a new record. We can say that the demand for LINK direction continues to increase.

If the LINK / USD chart is examined technically, LINK found support from the break of $ 30.00, the upper band of the minor channel, and climbed to the $ 32.00 level, surpassing the $ 30.75 in the Fibo'61.80 correction. This rapid rise is accompanied by a minor correction and the initial support level will again be at $ 30.75. Then, for the LINK / USD pair, the channel upper band of $ 33.00 may come up. The outlook is on the uptrend, retreats are reacting. 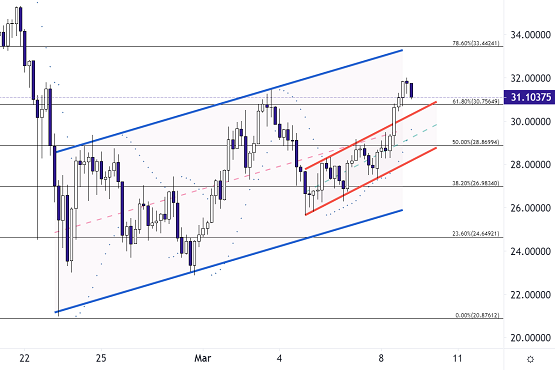 Basic Attention Token has doubled its own success with the recent success of Brave, the search engine to which it is integrated. For this reason, in the macro part, Brave's business partnerships and the number of users guide the valuation of BAT as well. And it seems that the Brave platform, which is intended to be developed to compete with Google, is promising and as long as this situation continues, the positive scenario will continue for BAT investors.

When the BAT / USD chart is analyzed technically, it is seen that the chart has achieved a successful rise, with the horizontal left behind between $ 0.64 and $ 0.71. In the pullbacks, the initial support zone will be $ 0.66. Then positive moves above $ 0.71 could bring the $ 0.84 and then $ 0.90 zone into the agenda again. Flag formation and target pricing above $ 1.00 are continuing on the uptrend. The cruise is positive. 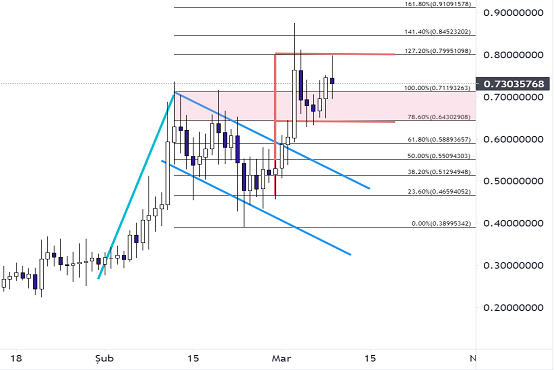