Crypto assets fall into the category of "transferrable securities" and are therefore clearly included in the scope of sanctions against Russia, the EU said. In addition, the EU imposed similar penalties to Belarus for aiding Russia's warlike regime.

SkyBridge Capital founder Anthony Scaramucci reiterated his stance that Bitcoin would reach a price point of $500,000. The founder says the regulatory environment prevents Bitcoin reaching he price target of $100,000.

According to Alex Bornyakov, Ukraine’s deputy minister at the Ministry of Digital Transformation and the de facto crypto spokesperson of the government, Ukraine received nearly "$100 million” in crypto donations.

Wall Street stalwart Morgan Stanley has recently increased ownership of the Grayscale Bitcoin Trust (GBTC), as it awaits the vehicle’s proposed conversion to a fully-fledged exchange-traded fund. In total, Morgan Stanley funds held 13 million GBTC shares as of the end of 2021, worth more than $371 million at press time.

On Wednesday, US President Joe Biden signed an executive order (E.O.) actively calling for “urgent” action to explore Bitcoin and other cryptocurrencies as well as piloting a CBDC. The order outlines a “whole state” approach in which many regulatory agencies are called upon to cooperate in the research and development of digital assets and related regulations.

US Securities and Exchange Commission President Gary Gensler said the agency would collaborate with government organizations to achieve “key public policy objectives” in the cryptocurrency sector. His comments came shortly after US President Joe Biden signed his first executive order for digital assets.

Earlier today, the Dubai leader signed the “digital assets law”, which established an independent authority for oversight of the cryptocurrency sector. The law aims to determine the regulatory position of the United Arab Emirates (UAE) in the sector.

Immediately after US President Joe Biden signed an Executive Order addressing the government's position on cryptocurrencies, Wyoming Republican Senator Cynthia Lummis announced that she had drafted a new bill that would integrate digital assets into the financial system.

The Ethereum blockchain, which has long been criticized for its high network costs, has recently declined to the lowest level of six months in gas prices - the lowest since August 2021.

Global investment manager VanEck launched the Digital Assets Mining ETF with the acronym "DAM". The latest exchange-traded fund was designed to enable investors to invest in firms in the digital asset mining ecosystem.

Bitcoin lost a 6,00 % value during morning hours and is priced around $39.195. Wall Street stalwart Morgan Stanley has recently increased ownership of the Grayscale Bitcoin Trust (GBTC), as it awaits the vehicle’s proposed conversion to a fully-fledged exchange-traded fund. In total, Morgan Stanley funds held 13 million GBTC shares as of the end of 2021, worth more than $371 million at press time.

When we consider the BTC/USDT pair technically, BTC, which has been under $39,000 for the past few days, has started to rise sharply with the statement made by the US Treasury Minister yesterday and broke the resistance level in the $49,000-40,500 band. We expect this band to work as a support in BTC, which tested the level of $39,000 with a negative fluctutation through the market this morning. If the $39,000 level is lost, pricing towards $37,000 might follow. 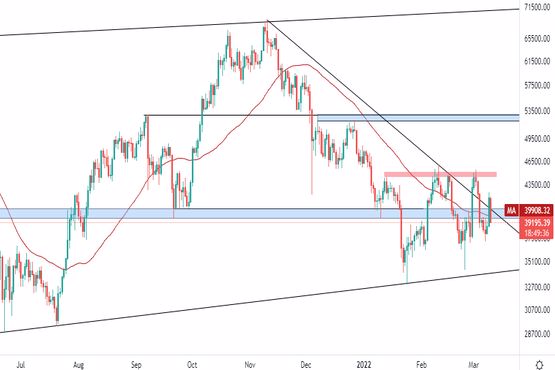 Ethereum lost a 4,60% value during morning hours and is priced around $2591. The Ethereum blockchain, which has long been criticized for its high network costs, has recently declined to the lowest level of six months in gas prices - the lowest since August 2021.

When we consider the ETH/USDT pair technically, as we stated in the daily bulletin recently, a rally close to the blue marked resistance zone in ETH surged after the positive divergence in RSI on the 4-hour chart. If the level of $2580 is lost in ETH, which starts negative in parallel with the market, a retracement towards the previous dip level of $2400 might follow. 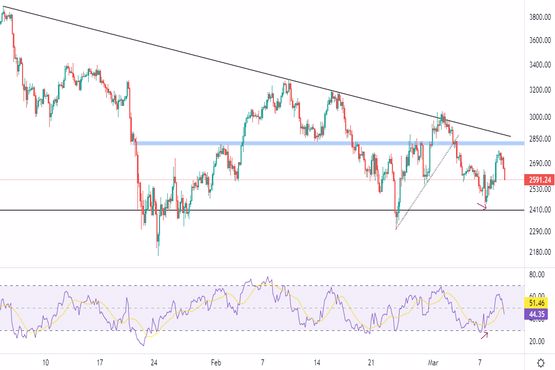 AVAX lost a 5,00% value during morning hours and is priced around $73.22. When we consider AVAX/USDT pair technically, the sales pressure in AVAX, which has recently reacted to the major downward trend, has increased, and downward price movements continued to the short-term uptrend. The positive news flow from USA and Avalanche Foundation's big announcement happened when climbing the support zone. So AVAX broke the $76.89 level upwards. In AVAX, where there is a stagnated price movement, the breakout of the stagnated zone will determine the trend. 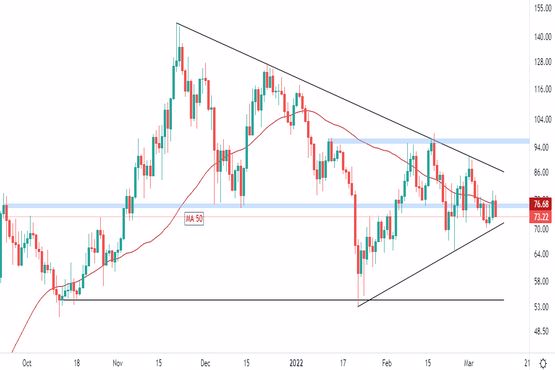 Ripple lost a 4,10% value during morning hours and is priced around $0.7311. When we consider the XRP/USDT pair technically, there is no major change in the outlook. In XRP, which clings to the support level of $0.7121, the positive course is dominant with the market-wide increase this morning. In XRP, which has not yet broken the short-term downward trend, the price movement will be determined by the breakout of this stagnated area. 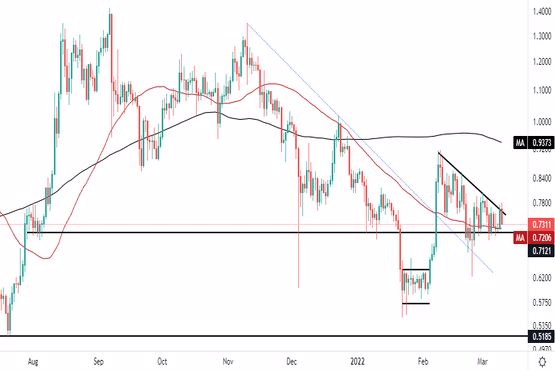 LTC lost a 5,10% value during morning hours and is priced around $101.1. When consider LTC/USDT pair technically, along with the negative outlook that has dominated the market for the last few days, there was a limited surge in LTC, which had broken its supports at $113.1 and $104.9 downwards. Retesting the downtrend, LTC has broken the level of $104.9 down again along with the resistance. If the daily close occurs in a negative way, a pullback towards the previous dip levels might follow. 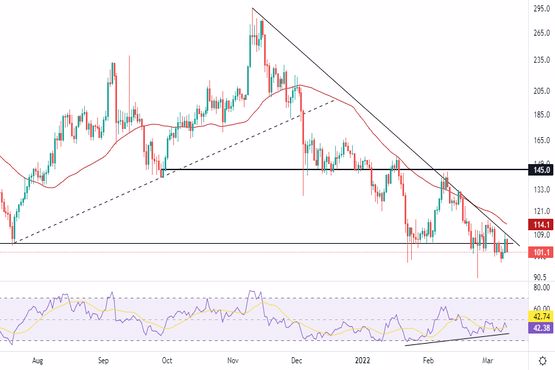 LINK lost a 5,60% value during morning hours and is priced around $13.23. When we consider the LINK/USDT pair technically, LINK has price action inside the horizontal channel as of May 26. However, it has closed the day below the lower line for the last three days. As of the candle close two days ago, LINK's positive divergence was confirmed. After the confirmation and news feed, LINK, which started pricing again inside the channel yesterday, is retreating towards the lower line as of this morning. If it sustains retesting and closes the day within the channel, we expect the rise to continue towards the level of $15.50. 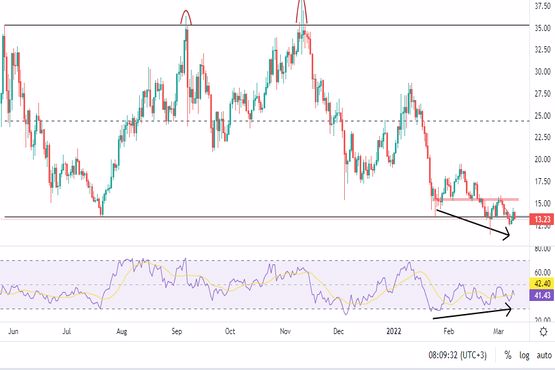 BAT lost a 5,50% value during morning hours and is priced around $0.6440. When we consider the BAT/USDT pair technically, BAT continues price action below the downtrend on November 28. BAT, which also fell to the support zone in the $0.64-0.70 band, confirmed its positive divergence in RSI as of the candle close two days ago. BAT, which rose yesterday with this confirmation and news flow, is still priced within the support zone today. We cannot talk about permanent ups and downs until the downward trend is broken. 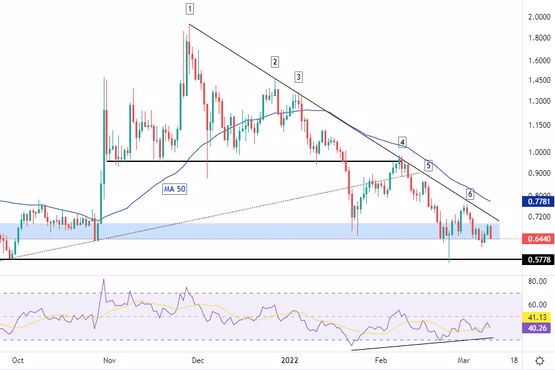