The European Central Bank report assessed the potential rise and intended use of central bank digital currencies (CDBCs). The report likened CDBC to a sacred asset in overseas payments, meaning it could eliminate most problems. The ECB stated in its report that it has the potential to outperform BTC and other stablecoins, and that it is more reliable.

MicroStrategy Will Continue to Buy BTC!

MicroStrategy announced that after Bitcoin fan and investor Michael Saylor left his position as CEO, they will not change their Bitcoin strategy and will continue to hold and add Bitcoins in their hands. It was also announced that Michael Saylor would be the new chairman of the company's board of directors and that Saylor would be responsible for Bitcoin strategies. MicroStrategy holds 129,666 BTC with an average of $30,000.

To be powered by Tron Crypto APIs

Crypto APIs is a blockchain development platform. According to their announcement yesterday, they announced that they will support Tron with the blockchain infrastructure product package. Users can now use Tron mainnet and Nile networks together. In addition, Crypto APIs announced that they have integrated Tron into many of their products to meet the growing demand for operating and developing Tron.

A shocking claim has been made about Voyager, the crypto borrowing company that filed the bankruptcy announcement and is also one of the publicly traded companies that holds the most Bitcoins. Company CEO Stephen Ehrlich reportedly earned more than $30 million by selling his shares after his stake reached peak last year.

Solana continues to investigate yesterday's incident of emptying 8,000 Solana wallets. Solana Status, the center of data and system performance, said there is no evidence that the Solana protocol and cryptography have been breached or compromised. It also appears that the breach affected addresses created and used in Slope mobile wallet apps at some point.

The fact that there was no event that could affect the direction of the markets also caused a recession in the crypto asset market. Although we think that the market will be more fragile, especially after the China-Taiwan tension and Pelosi's visit, the markets also reacted differently to this news. The Nasdaq made a significant rise yesterday, while the VIX also saw a decline of 8.3%. However, we see that the cryptocurrency market is not affected by this movement and continues to remain stable.

Bitcoin is pricing in at $23,094 today, with a 1.21% gain in value in the morning. Bitcoin, which made two-way movements in the channel where it returned after returning from the 24,500 level, continues to make movements between 22,750-23,450. BTC, which is currently at $ 23,000 levels, which we can accept as the middle of the channel, seems to be a secret that an explanation or event that will deeply affect the markets will have to occur in order to break down in one direction. Although there are certain intervals where positive volume inflows and purchases are experienced yesterday, we see that Bitcoin has thrown pins on the 23,500 that we can call above the channel and returned to the channel. 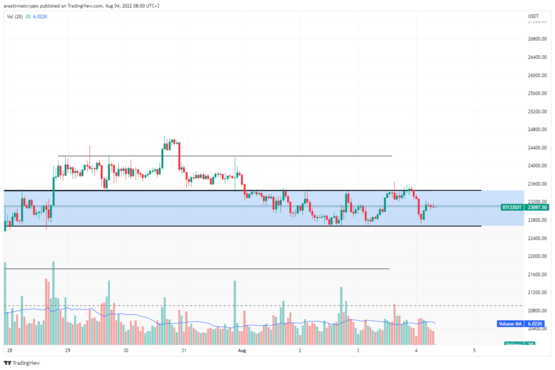 Today, ETH, which lost 2.62% of its value in the morning hours, is priced at $ 1661. After breaking down the 1670 level with the falling triangle pattern it entered in Ethereum, it received support between the 1560-1580 levels and then advanced back to the resistance level of 1670. When we look at the hourly chart, the breakdown of 1670 levels in Ethereum, which we see that it has formed a rising triangle for 2 days, seems to be very important for the upward movement of the whole market. 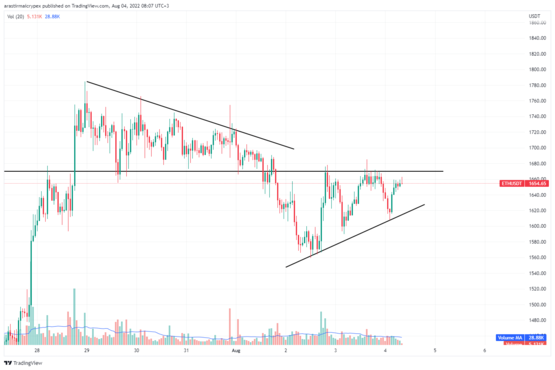 AVAX, which has gained 3.43% as of the morning hours, is priced at $ 23.83. AVAX continues to move between support and resistance levels. AVAX, which is currently in the resistance zone of the falling triangle pattern formed by the hour, will continue its rise with a target of $ 26 if it breaks this level. If it returns to the support level, the $23 band and then the 22.40-22.55 range will serve as support. 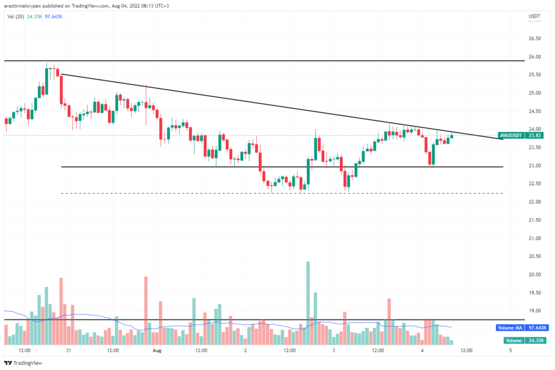 XRP, which gained 1.06% in the morning, is priced at $ 0.3734. Ripple continues its falling channel movement, which started with the sudden rise at the end of July. After seeing support from the channel middle band, Ripple advanced to the upper band of the channel and broke out at 0.3730 levels and then a horizontal movement was made. In addition, the breaking of the 0.3760 level in Ripple, which has reached the resistance levels of the rising channel it is in the daily, seems to be very important. 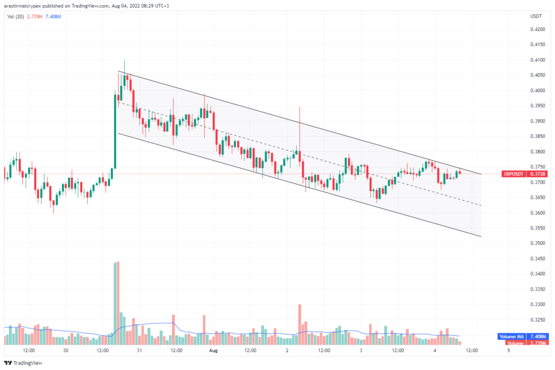 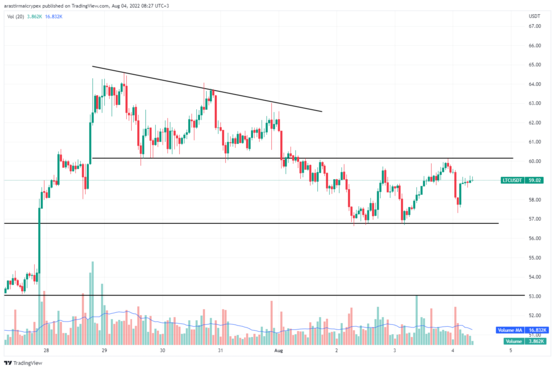 LINK is up 3.13% today at $7.51. Although LINK repeatedly tried to break down the channel it had been in for months, it could not succeed and returned to the channel. The fact that the daily and weekly closes we expected above the 7.57 level did not come has caused LINK to remain in the same channel movement since mid-June. The breakdown direction of the channel where BTC is currently located will indicate whether LINK will remain in the channel or start the upward movement. 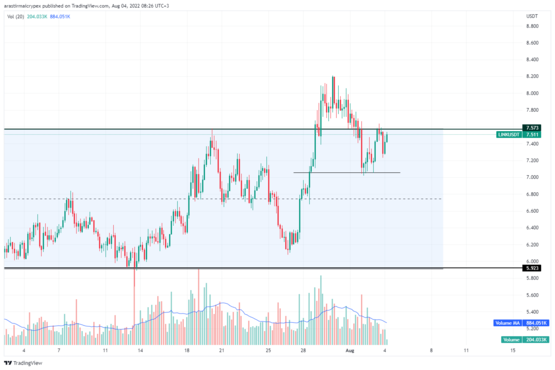 BAT is trading at $0.4068, up 2.86% as of morning hours. BAT is testing the resistance levels of its falling channel movement. BAT, which rose with the support it received from the middle band during the night hours, failed to break the channel resistance at the 0.41 level. We can say that BAT can continue its rise by targeting 0.44 in case of an upward breakdown. 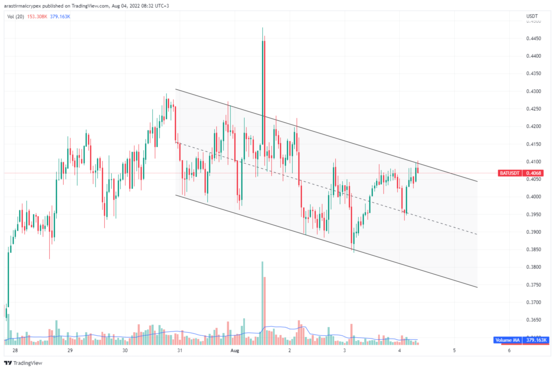