The European Investment Bank will start using Ethereum to issue two-year digital bonds, Bloomberg reports. The bank, which plans to issue approximately $120 million worth of digital bonds on Ethereum, is supported by giants such as Goldman Sachs and Santander.

Central bank of Iran reportedly allows the country's financial institutions to use cryptocurrency to pay for imports. The bank, which previously predicted that digital assets will not be used by anyone, seems to have changed its decision. Now institutions will be able to pay with cryptocurrencies while purchasing goods and services from other countries.

Mastercard will launch cryptocurrency rewards credit card in the following months in partnership with Gemini cryptocurrency exchange. When customers shop using this card, the points they earn will be credited to their accounts as BTC and other cryptocurrencies.

Nexon Buys $100 Million Worth of Bitcoin

Tokyo-based game company Nexon has announced that it has purchased 1,717 Bitcoin. CEO Owen Mahoney has stated that the reason for their purchasing Bitcoin was to maintain purchasing power in cash assets.

Ethereum core developer Tim Beiko announced that the ETH upgrade, known as 1559, will be active on the network by July 14. Thanks to EIP-1559, ETH will be burned according to the wages in the network, and its supply will be reduced and made deflationary.

Seeking to access Ripple's sales on overseas exchanges, the SEC stated that the company's counter-defense was legally inadequate and that access to the records was permitted by the US congress. The court opinion will be announced at the hearing to be held on April 30.

The cryptocurrency market is watching a mixed and profit-selling trend this morning ahead of FOMC. While the flagship Bitcoin is priced at $54,150, we see losses close to 2%. However, price-based volatilities may occur. The main trend and indicators are that "BEAR" has not started. Bitcoins accumulated in miner pools, in addition to this, the SOPR on the on chain indicators again over 1 can be an example to confirm the bullish trend. The $100 million BTC purchase of the Japanese Nexon was the purchase from different geographies to the market.

When we take the BTC/USD technically, it has become a support after the Fibo'38.2 zone, which is at $53,920, has been exceeded. However, this withdrawal experienced in the morning hours may shift towards the 7-day DEMA. As the price holds on DEMA, which is above the $53,000 level, we can see a hold in the movements. While our main trend, the rising channel, crosses the $50,000 level, this point also coincides with the lower band of the 30-period Bollinger. 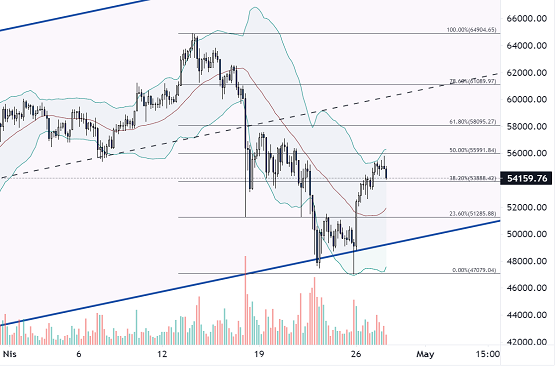 Ethereum  is retracing 2.5% this morning, keeping pace with profit sales across the market after the record hit at $2,720 yesterday. Before the conclusion of the Fed's meeting, the US yield curve moved up again, as the demand for yesterday's bond auction was insufficient. This situation may continue its pressure throughout the day, so cryptocurrency investors can watch US interest rates closely today. The European Investment Bank's issue of digital bonds on Ethereum may also experience new participants and a recovery in demand in the medium term. The EIP-1559 improvement was also dated in July. During the summer months, the Ethereum calendar will be lively with the London pas

When we consider ETH/USD technically, the bullish channel continues its movements. The channel sub-band also crosses the 30-day Bollinger mid-band level of $2,250. Although there is a possibility of a pullback in the price, the technical direction is up and the trend direction is rising, regardless of price fluctuations. 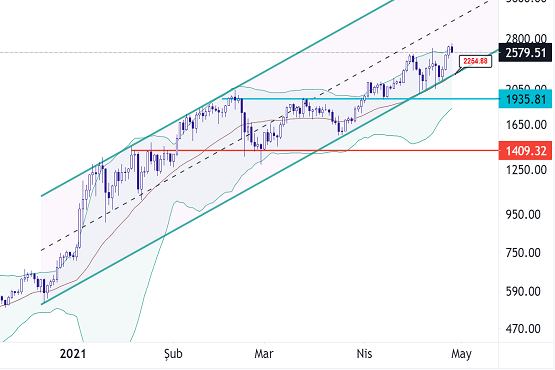 AVAX  is pricing above the $26.65 level, experiencing a 4.5% price retracement this morning. Although the recovery trend in the parity that we analyzed in the 3-hour period is noteworthy, it has not yet been able to support it with candle closings above the $28.00 level, which was previously pressured. The closest support zone is $24.80, which is in the 23.60% slice where Fibonacci is working strong. While the MACD indicator shows that the purchase volume has decreased and pricing is moving towards sellers in the said period, momentum is seeking support on the uptrend. While the indicators are signaling a correction for the short term, closing above the $28.00 and $30.00 levels will also create bullish opportunities for AVAX in the recovering market. 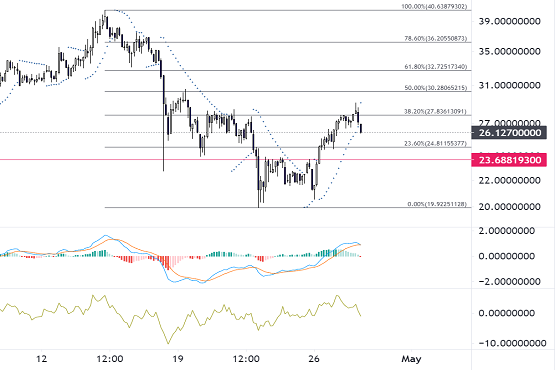 Ripple  is pricing around $1.31, with a 7% retracement this morning. Ripple, which has made agreements with three new universities on different continents, thus contributes to the development of blockchain technology, while at the same time accelerating the demand on XRP through a Japanese-based swap exchange. With the substantial impact of fundamental analysis on XRP that cannot be ignored, the overall pre-trial trend on April 30 is positive.

When the XRP/USD parity is examined technically, the parity is within the horizontal channel boundaries in the hourly period, while the general market movement breaks the $1.34 channel lower downward and tested the $1.28 zone in the Fibo'38.20 zone. Then, in the parity, accompanied by a rapid one-hour recovery, the Bollinger bands are widening in the downward break, which may suppress the buyer positions in the short term. However, the parity is holding on to the uptrend in general outlook. 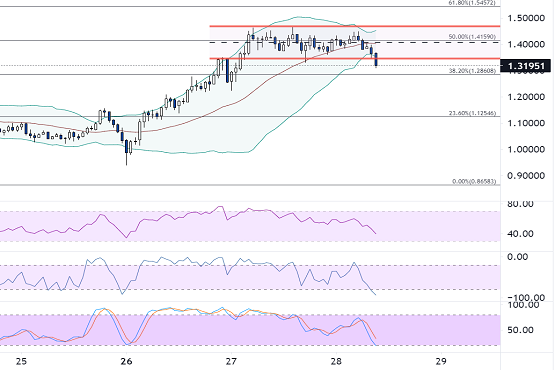 The actual price of Litecoin  has reached an all-time high in the calculation based on the market value. This indicates that the discount among the major cryptos is actually continuing. The amount of LTC that has been HODL or has not moved for a long time is at the lowest point in 15 months. The ongoing interest by new investors for Litecoin, whose active and new address numbers are in an upward trend, is read positively.

If the LTC/USD parity is technically handled, it seems that the break is not in sufficient volume, led by the weak price candles at the 4-hour closings, for the parity that has surpassed the downtrend boundaries with the break of the upper band of the $250 downtrend. The MACD and momentum will start showing positive signals if they see backlash buys from the $243 support. However, candlestick closes below $243 can increase the risk for buyers and put pressure on the parity. Although there may be instability in the short term, it should not be forgotten that the general trend is upward. 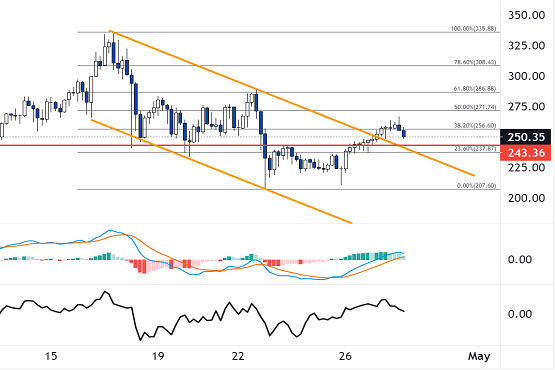 Chainlink  is pricing in the zone of $35.50, with a 3.5% correction this morning. The amount of Chainlink, the largest DeFi token, on Uniswap, one of the most demanded decentralized exchanges, has reached an all-time high. Transaction volumes in the spot market are in a decreasing trend. This shows that Chainlink, which offers passive returns on decentralized platforms, continues to gain strength on the DeFi side.

When the LINK/USD parity is technically taken into account, the parity has not yet been able to break the $37.80 downtrend, which is under pressure due to general market fluctuations, and has moved away from the double bottom target. In the parity priced near the $35.40 support, there is a possibility that the closings below the said level will increase sales in the short term, but the recovered lows continue to rise minor. 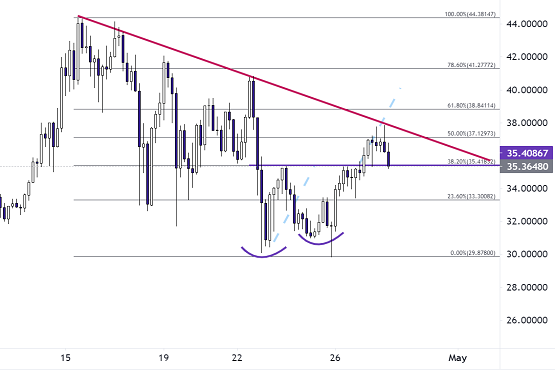 Basic Attention Token is down 4% this morning, pricing around $1.17. The parity failed to reach the target pricing in the double bottom formation that it created, and made price swings in Bitcoin-led corrections. For the parity, which saw reaction purchases from the $1.15 support and neck area, pricing above the $1.25 level buyers in the Fibo'50 zone could lead to the $1.37 zone being tested again. However, we will continue to follow the support zones for possible withdrawals in the crypto money market, where we see the obvious effects of global indices and risk appetite. In BAT/USD parity, Fibo'23.60 slice provides psychological and technical support on $1.00 pricing. On the other hand, $1.10 will be the intermediate support level and the minor uptrend will be preserved unless it goes below $1.10. 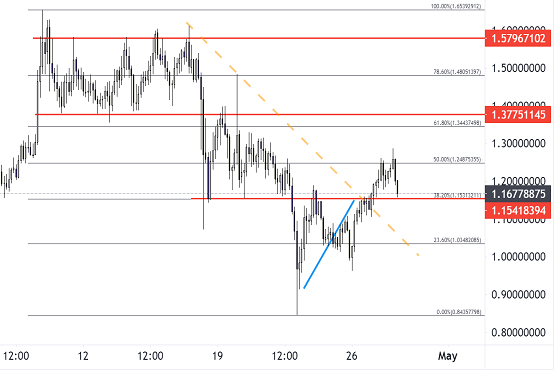