McWilliams explained to Reuters how US regulators are investigating the issue of banks holding crypto assets. This could mean ”more precise rules on holding cryptocurrency to facilitate customer trading, using them as collateral for loans, and even keeping them on their balance sheets, such as more traditional assets," she said.

The law “On Virtual Assets,” an initiative of Ukraine to regulate the growing crypto space, has been revised and proposed for final adoption. This month it was announced that an important parliamentary committee also supported the draft law vetoed by the president of Ukraine.

Due to the ongoing XRP case, Ripple's XRP has experienced a stagnant period. But Ripple's 3rd quarter report announced that the company experienced “significant growth in ODL (On-Demand Liquidity),” by ODL transactions on RippleNet increasing by 130% compared to the previous quarter.

AMC Entertainment CEO asked his followers whether the company should accept payments in Shiba Inu (SHIB) or not. The company plans to accept many cryptocurrencies by the end of the year.

A report from the Kazakhstan Data Center Industry and Blockchain Association estimates that cryptocurrency mining could generate $1.5 billion in revenue for the country over the next five years.

In a statement by Bloomberg's ETF Expert Eric Balchunas, US investment manager Valkyrie withdrew its offer for a leveraged exchange-traded Bitcoin fund.

Bitcoin Now Can Be Purchased At Some Walmart Stores in the U.S.

The American retail giant Walmart is quietly adding Bitcoin support to Coinstar machines at dozens of stores in the United States.

In a recent interview, former White House Communications Director Anthony Scaramucci, founder and CEO of the global alternative investment company SkyBridge Capital, announced that he predicts a wave of corporate interest in cryptocurrency "over the next 12 to 18 months".

The Wharton School of the University of Pennsylvania accepts payment in BTC and ETH for a new program on blockchain technology and crypto-assets.

Bitcoin lost a 1,67% value during morning hours; the current price is $60.234. In a statement by Bloomberg's ETF Expert Eric Balchunas, US investment manager Valkyrie withdrew its offer for a leveraged exchange-traded Bitcoin fund. Also, the American retail giant Walmart is quietly adding Bitcoin support to Coinstar machines at dozens of stores in the United States.

When we consider the BTC/USDT pair technically, Bitcoin, which continues to move within the ascending channel that exists as of July 20, has pullbacks along with the reaction from the upper band on October 20. Bitcoin retreated below the $62.236  level (Fibo'78,60) as of this morning, may continue to retreat towards the middle band of the channel. In the daily chart, MACD continues to give a sell signal. We consider the drop as a short-term pullback. The medium-term outlook remains positive, and this will trigger the uptrend shortly. 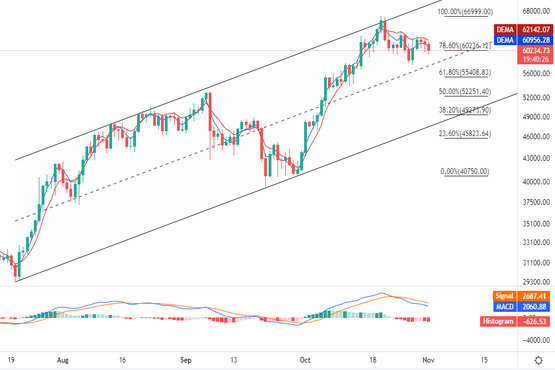 Ethereum lost a 2,00% value during morning hours, and the current price is $4206. Ether has reached a new ATH of $4460. ETH burning operations, which began with the London hard fork on 5th August, show that more than 700.000 ETH worth $3B has been burned so far.

When we consider the ETH/USDT pair technically, ETH, which broke the uptrend of October 11 downwards, closed the day below the trend. There are ascending tops as of October 20 and descending tops on RSI (which signs the negative divergence). This situation triggers the pullbacks, but the price-volume correlation shows that the sale has not shaped in volume. Following those pullbacks will be limited and the uptrend will hold on. 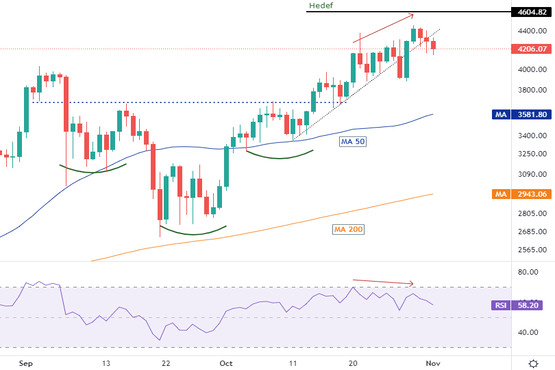 AVAX lost a 1,90% value during morning hours, and the current price is $62,36. When we consider the AVAX/USDT pair technically, AVAX, which has been continuing its price movement within the ascending channel since September 13, could hold onto the $62,94 (50-MA). In the daily chart, stochastic proceed to give a sell signal. If it closed the day below the 50-MA, it could retreat to the $58 levels, uptrend support points. AVAX has had a sideways trend for a long time. However, in November, another peak level can be reached. 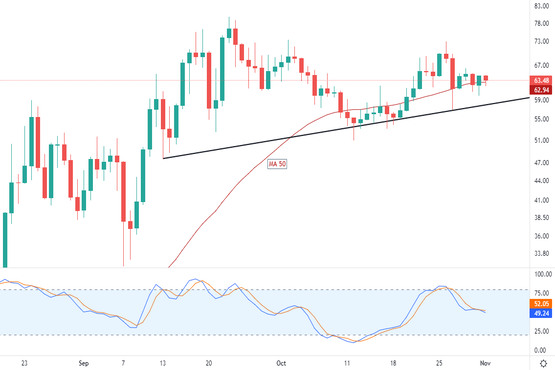 Ripple lost a 2,50% value during morning hours, and the current price is $1,0823. Due to the ongoing XRP lawsuit, Ripple's XRP is experiencing a stagnant period, but Ripple's Q3 report shows that it will over being stagnant. But Ripple's 3rd quarter report announced that the company experienced "significant growth in ODL (On-Demand Liquidity)," by ODL transactions on RippleNet increasing by 130% compared to the previous quarter.

When we consider the XRP/USDT pair technically, XRP, which faced resistance from the present trend as of October 10, retreated increasingly towards $1,0577 (50-MA) today. XRP can rise sharply if it breaks the short-term downward solid trend. Before this, XRP had tried to break the trend five times but failed. MACD can give a buy signal soon, after a possible recovery. XRP is now undervalued compared to other altcoins. But it should close the day above the 50-MA. 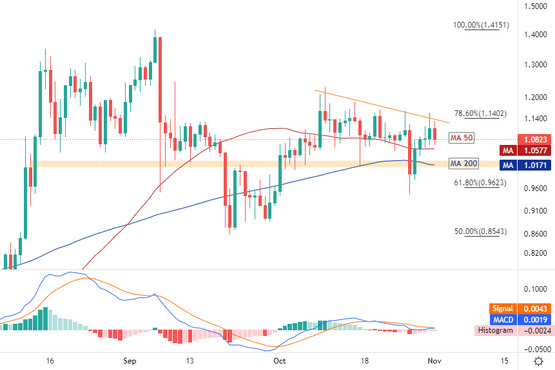 LTC lost a 0,95% value during morning hours; the current price is $189,9. When we consider the LTC/USDT pair technically, LTC, which broke both the short-term uptrend and the $187,3 (200-MA) level after the price movement on 27th October, recovered well, and outlook positive is on display. LTC could hold on above the $185,8 (200-MA) and has been a sideways trend for a long time. Market conditions give signals for an upward break. 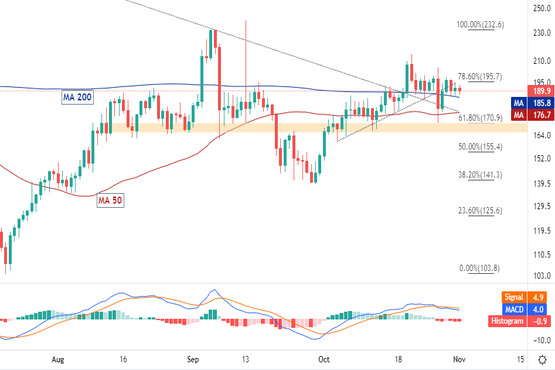 LINK lost a 1,95% value during morning hours, and the current price is $29,50. When we consider the LINK/USDT pair technically, LINK, which moves in the ascending channel as of September 20, faced resistance from the upper band and began to retreat.  A pullback to the level of $ 27.50, which coincides with the channel lower band and the 50-MA, will not be a determinant factor in the technical outlook. There had been a sell signal from MACD in the daily chart, but it will be approved solely by the daily close. The retreats towards the lower channel band should be followed soon. 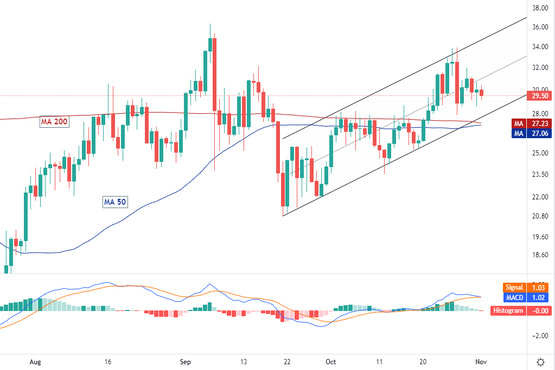 BAT lost a 1,87% value during morning hours, and the current price is $0,9706. When we consider the BAT/USDT pair technically, BAT, which broke the downward trend along with the above daily volume on October 29, has risen sharply and closed to the $1,50 levels. Having retreated to the peak level of $1 for the last two days, BAT can go down $0,90. 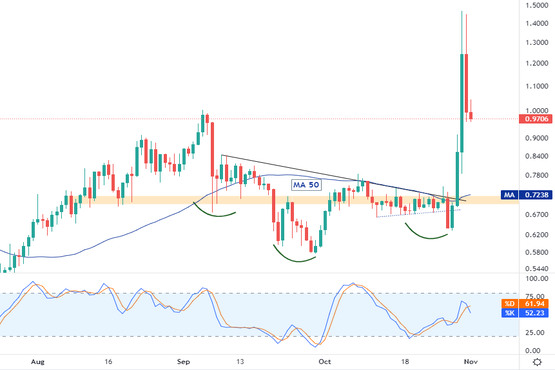