Federal Reserve Chairman Jerome Powell reiterated today that there is an increasing need for cryptocurrency regulations in a statement before the House Financial Services Committee. He said recent events in Ukraine have “underscored the need for Congressional action on digital finance, including cryptocurrencies.”

With the price of Bitcoin (BTC) steadily growing over the past several days and reaching briefly above $45,000, its accumulation has also increased dramatically too. Apparently, the Bitcoin accumulation started as of late February, as published by internet entrepreneur Lex Moskovski on his Twitter page on March 1, citing the data from Glassnode, an on-chain market analytics aggregator.

Four members of the Senate Banking Committee are asking what the Treasury Department is doing about the crypto in the context of the sanctions policy. In a letter to Treasury Secretary Janet Yellen on March 2, Elizabeth Warren, Mark Warner, Jack Reed and Committee Chairman Sherrod Brown called for a response to the issues they are working on in cryptocurrencies.

Bill Miller, a billionaire investor from CNBC who spoke to Squawk Box, discussed Bitcoin's potential to serve as a safe harbor asset in times of international unrest. The American investor explained why Russia and other nations that do not have a reserve currency could resort to Bitcoin to combat inflation that does not penetrate foreign government control.

Bitcoin lost a 1,10% value during morning hours and is priced around $43.429. With the price of Bitcoin (BTC) steadily growing over the past several days and reaching briefly above $45,000, its accumulation has also increased dramatically too. Apparently, the Bitcoin accumulation started as of late February, as published by internet entrepreneur Lex Moskovski on his Twitter page on March 1, citing the data from Glassnode, an on-chain market analytics aggregator.

When we consider the BTC/USDT pair technically, there was a surging Bitcoin yesterday supported by the positive news flow. But then Fed statements shadowed the rise. In BTC, which broke the resistance zone and descending trend in the 39.000-40.500 band, which we saw that there was no major change in technical terms, the harshest rise of the last period was experienced on Monday with a return of approximately 15 percent. Receiving signal from DEMA intersection 7-14 is still preserved. As we mentioned in the daily bulletin yesterday, the closest resistance level, 44.700-45.000, could not be broken upwards. If this region can be exceeded, the price movement towards the level of $51,000 can continue. When retreating, the $40,500-41,000 band should be followed. 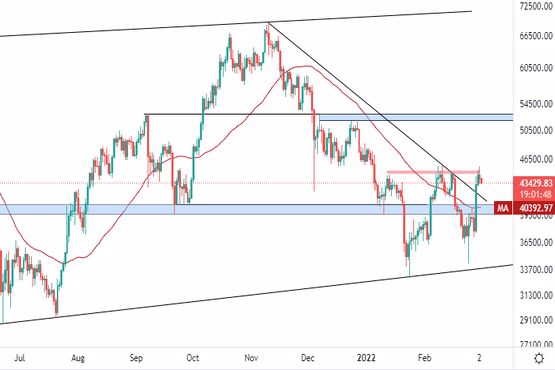 Ethereum lost a 1,44% value during morning hours and is priced around $2903. When we consider the ETH/USDT pair technically, ETH, which had retreated to $2300, recovered well with BTC.
ETH, which broke both the short-term resistance zone at $2810-2836 and the level of $2865 (50MA), surged over $3000. Yesterday, ETH, which could not hold above its short-term downward trend, experienced a retreat towards $2900. For the continuity of the upward trend, it should hold above the 50MA level. 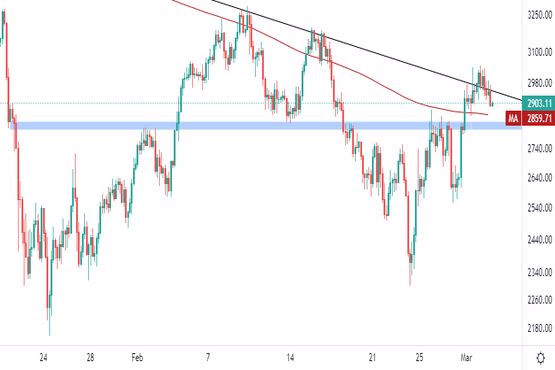 AVAX lost a 2,10% value during morning hours and is priced around $81.41. When we consider the AVAX/USDT pair technically, AVAX broke both its 50MA and its major descending trend, which it has tested many times recently. AVAX has faced rejections from this trend for the last two days. Yesterday a bearish engulfing candle formed as of daily close. If the major descending trend for AVAX breaks upwards, we expect the rises to continue towards $95. In case of igniting spike, it should hold above the support zone marked in blue. 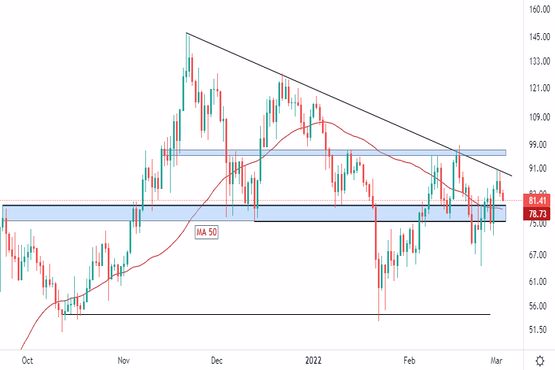 Ripple gained a 0,10% value during morning hours and is priced around $0,7696. When we consider the XRP/USDT pair technically, XRP could hold above the support level at $0,7121 despite the market crash of last week. But it could not break the short-term descending trend. If the level of $0.7920 is broken to upside, the level of $0.9587 (200MA) can be targeted. 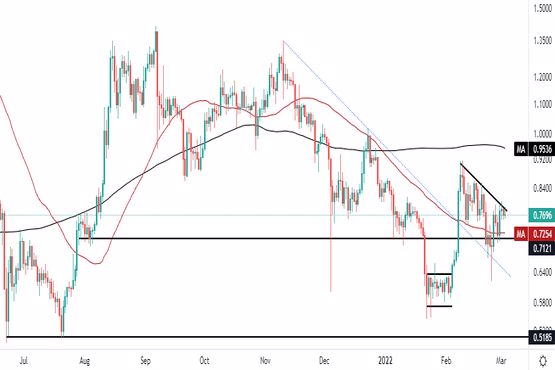 LTC gained a 0,40% value during morning hours and is priced around 110.6. When we consider the LTC/USDT pair technically, with the positive trend throughout the market, LTC, which had broken the resistances at both $104.9 and $ 113.1 upwards, broke them again downwards after the Fed statements. At the same time, the price movement is still below the major descending trend. If the $121 level, which corresponds to the descending trend and its 50MA, is broken to upside, there may be a rise towards the $145 level. When retreating, the short-term support level is $104.9. 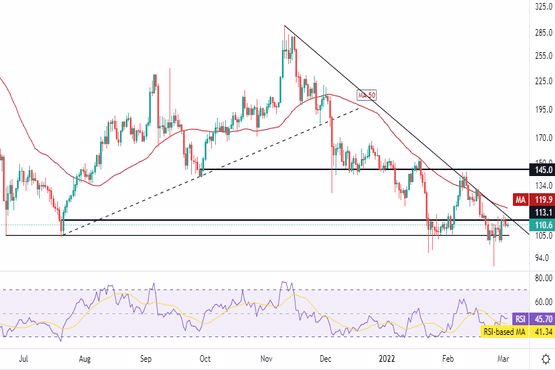 LINK lost a 1,20% value during morning hours and is priced around $15.10. When we consider the LINK/USDT pair technically, LINK has price action inside the ascending channel as of May 26 and ignited a spike with the positive divergence RSI in the daily chart. So LINK broke the descending trend, testing four times before. But it faced rejection from the short-term resistance level marked in red. If market-wide retracements continue, the channel lower line should be followed. 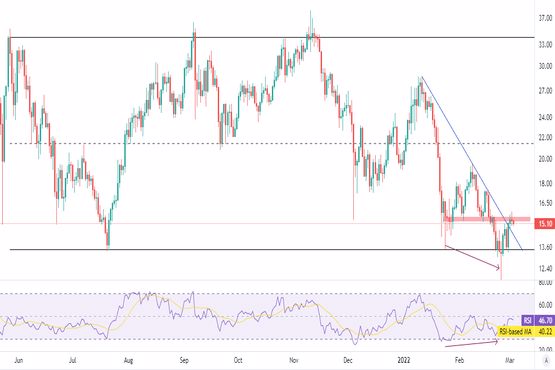 BAT lost a 2,05% value during morning hours, and is priced around $0,7158. When we consider the BAT/USDT pair technically, BAT continues price action below the downtrend on November 28. BAT retested the trend this morning. Facing rejection from this zone, BAT continues its price movement towards the support zone marked in  blue. As long as this zone is not lost downward in the daily chart, we do not expect a major plunge. 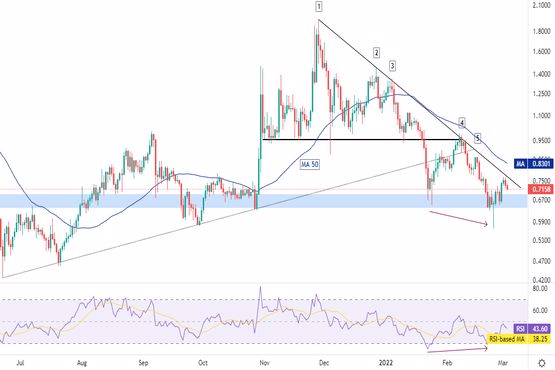