The Fed, which raised interest rates as of March to combat inflation, announced a 75 bp increase yesterday evening. In the United States, which entered the year with a rate of 0.25, the interest rate rose to 2.5 levels. In yesterday's decision, where the expectation of 75 bp was on the table but the possibility of 100 bp was also on the table, the Fed's preference of 75 bp was also interpreted positively in the markets.

In the court process, which has been going on for about 1.5 years, new developments continue to take place. The SEC has previously challenged a decision to assign the post of "Amici Curiae" (impartial expert assisting the court) to some XRP holders who had been out in favor of XRP. This appeal was rejected by Judge Analisa Torres. Thus, although a new decision has been issued in favor of the Ripple side in the court process, we now see that investor behavior is immune to such developments and is definitely not effective in XRP pricing.

In our country, where crypto investments are quite intense, it was known that the government was planning regulations on crypto coins. Within the scope of these studies, Nureddin Nabati's announcement on his Twitter account yesterday stated that an online meeting was held with Binance CEO Changpeng Zhao (CZ). No details were shared about the content of the speech. It is known that Turkey is very important for Binance, and that the largest part of the traffic on the stock exchange worldwide is based on Turkey.

It has been suggested that the European Banking Authority (EBA), which is tasked in Europe for crypto asset regulation, is very worried about being able to carry out its duties due to the lack of personnel and logistical difficulties for some of the work that needs to be done. EBA President Jose Manuel Campa said in his remarks that the issue was really worrying for them and that they had difficulty in recruiting specialists, especially for the purpose of regulatory supervision. He also stated that they have not determined which cryptocurrencies should be regulated before the launch of the European digital currency, which is expected in 2025.

XRP has announced Rippled, the core server of the Ledger Protocol. The update includes improvements such as NFT coding, a new API method for order books, or a simpler and more intuitive logging system.

On Wednesday, when all markets were waiting for interest rate decisions from the Fed, the market remained positive but low moving. The fact that the announced interest rate decision was 75 bp led to the fact that it was thought that the US should not be aggressive enough to increase its moves towards inflation by 100 bp, which created a positive atmosphere in the market. We think this positivity is more likely to be temporary.

Bitcoin is pricing in at $23,126 today, with a 0.75% gain in value in the morning. BTC, which made an upward breakdown with the interest rate decision, seems to have progressed to 23,500 levels and stayed there. In a possible downward movement, we can say that the critical level is the $22,800 level, which is the upper band of the channel where it broke yesterday. We see that its upside target is the $24,000 level, which is the peak of the past week. We will be following BTC's 24,000 targeted move or a reversal from current levels. 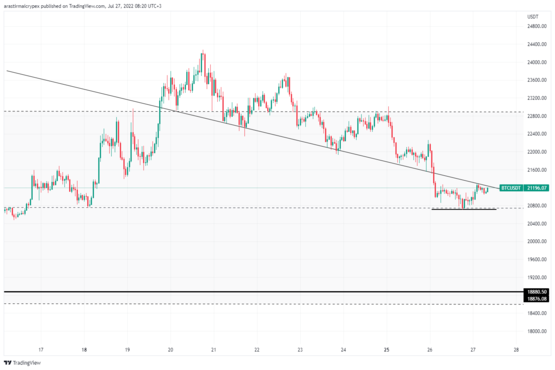 Today, ETH, which gained 0.2% in the morning hours, is priced at $ 1637. ETH, which showed a rapid decline with the fall of the markets, fell to $ 1330 levels and with the developments yesterday and the positive atmosphere before, it broke the levels of 1490 and then 1620 and came very close to the $ 1700 target again. ETH, which has seen a small sale after reaching the highest level of the last 1.5 months, can say that the primary target of the $ 1600 level is to make daily closes above $ 1600 and then break $ 1700. 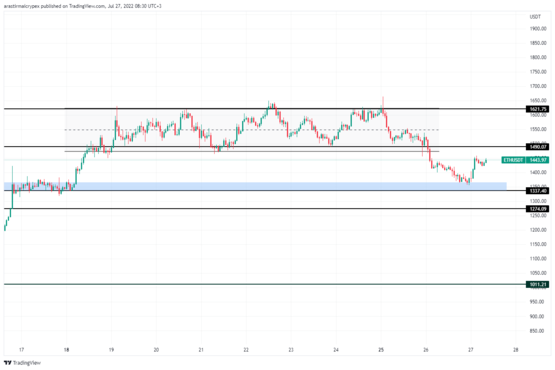 AVAX, which has lost 2.52% of its value as of the morning hours, is priced at $ 22.80. AVAX continues to move very much in line with ETH movements. AVAX, which increased by 8% in 1 hour with the acceleration of the market, switched to horizontal at those levels after breaking the 22.80 level. If we can stay above that level, we can start talking about the $25-26 band again. However, we can say that AWAX should be careful and that it makes bigger movements in the two-way movement compared to the market. 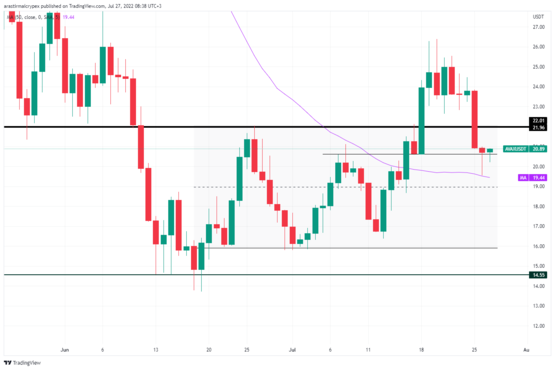 XRP, which lost 0.5% of its value in the morning hours, is priced at $ 0.3576. After Ripple returned to the channel, it entered a downward trend and then continued its decline until the channel hit the middle band at 0.3274. Ripple, which rose to 0.3350 levels after the support it received from the channel middle band, managed to rise to 0.36 levels by making an upward breakdown after last night's developments. We will be following Ripple, which continues to move towards the $ 0.38 target, to break down this level, which it has almost not been able to rise above for the last 1 month. 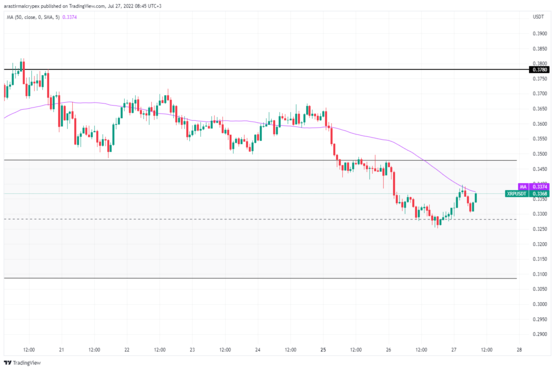 LTC is trading at $59.81, up 0.80% as of morning hours. LTC, which showed a falling image with weak price movement, fell below the channel middle band. Now we see that the news coming from yesterday in LTC, where a return to $ 50 is being talked about again, has provided a significant increase. LTC, which is located on the channel middle band, broke down here and experienced a rise of almost 12% to the channel upper band of 60.60 within 3 hours. LTC, which has not managed to break this level again, will apparently succeed in breaking the channel upper band of 60.80 as a result of a very positive news or a rise in BTC. 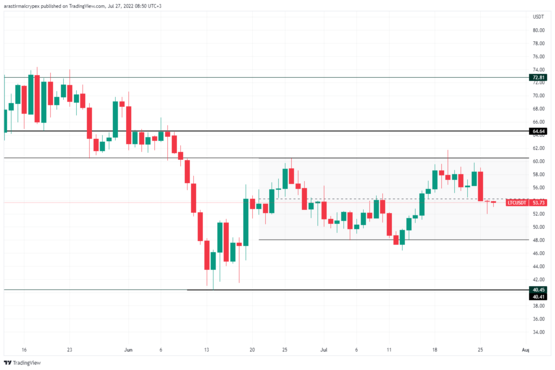 LINK is up 0.4% today at $6,892. The fact that LINK was in a falling triangle in the intra-channel movement caused it to fall further downwards when the channel mid-band broke. With the support it received from 6.13 levels yesterday, it showed a significant increase in the section where the market gained momentum and managed to rise above the channel middle band. LINK, which is currently above the resistance level in the falling triangle, will continue its movement with a target of 7.60 if it breaks here. 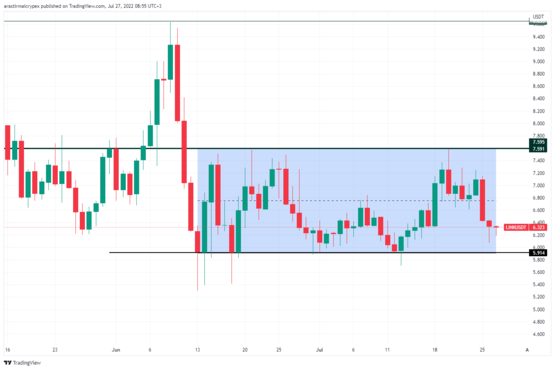 BAT is trading at $0.3918, up 1.09% as of morning hours. BAT has been in a strong sell-off for the past 10 days and was testing the lower band of the channel it was in for 4 hours. BAT, which has lost 20% of its value from its peak in the week, first broke the resistance in the downward trend with the news yesterday and then advanced to the channel middle band of 0.3976. We see that BAT, which has not managed to break that level for now, has not been able to break this level for now. We can say that the strongest region ahead of us is these levels and then it will continue its movement with the target of $ 0.44. 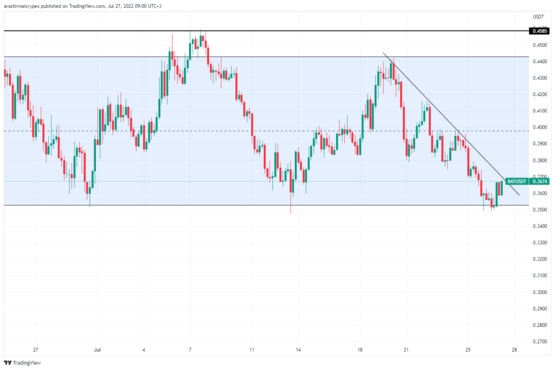