Flare Network, which previously held airdrops for XRP, announced that it will add the Stellar network to its ecosystem. Thus, XLM can be used in scalable smart contracts.

Google Finance also added cryptocurrencies to finance.google.com. Thanks to the prices listed under the "Crypto" section, Google Finance users will now be able to reach the latest state of the cryptocurrency market with a single click.

The Kava DeFi platform chose Chainlink as its official oracle solution. Thus, Chainlink oracles will power all DeFi products to be built on Kava. The main purpose is to move reliable decentralized finance products to the most successful and efficient place possible.

The partnership between DeFi project Fantom and AVAX, which is the 49th largest cryptocurrency in market value, was a happy development for both parties. Thanks to the partnership, these two blockchains will be connected to multiple chains.

Mastercard Will Not Support Bitcoin in the Near Future

Mastercard announced in its February 10 statement that it would add cryptocurrencies to the payment network, but did not specify which cryptocurrencies they were. In its current statement, the company stated that they do not think of Bitcoin in the near term because its volatility is high and the transaction speed is very slow.

According to the statement made by Ripple developers, the new version of the XRP Ledger, which was created to improve and improve the system usage and increase the efficiency of the software in various server configurations; It plays a key role for the Ripple team and XRP users.

Tether, the issuer of the USDT stablecoin, claims to have received 500 Bitcoins (worth about $ 23 million) ransom notes. In the announcement made on Twitter, it was reported that the investigation of this extortion attempt disclosed by Tether will continue.

Dubai-based cryptocurrency fund FD7 Ventures announced that it will buy Polkadot and Cardano by selling $ 750 million of Bitcoin under its auspices. The company, which has a net worth of over $ 1 billion, mostly Bitcoin, will make its sales within a month.

Bitcoin is trading near 2% positive at $ 46,000 this morning. Although it came to the agenda with a decrease towards the end of February, its monthly return is currently around 34%. With this return, Bitcoin is traded well above the other sub-market. Due to its volatility of more than 90% throughout February, volatility began to decline in the market, which is more reasonable for "buy and sell" movements and more suitable for short-term profit taking. This situation towards support is positive for Bitcoin. On the other hand, the perpetual rate rates show that buyers are starting to enter again. The decline in both the number of open contracts and the perpetual rate, after the volatility stemming from the leveraged positions in February's declines, shows that it is cleared of leveraged and buy and sell positions. Therefore, with the USA declining to 1.40% with 10 years, we may continue towards a more stable outlook in BTC.

When we consider BTC / USD technically, the positive mismatch between momentum and price chart continues over the 4-hour period. The previous high of $ 42,000 is currently our major support. Our resistance today will be the $ 46,800-47,000 zone. This point is both the passing of the descending trend and the previous support levels. This trend will be followed, accompanied by the rising momentum during the day, after the horizontality formed in the morning. 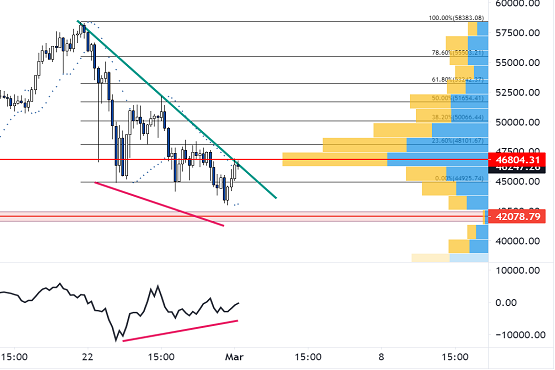 Although Ethereum was trading at $ 1430 this morning, it was one of February's most volatile coins, dropping from the $ 2040 zone to $ 1290. Increasing miner fees due to the density of the network made the Ethereum consensus problematic and transactions came to a standstill. Therefore, Ethereum, which recorded a rapid decline, is trying to recover towards the $ 1500 levels. On the other hand, Stellar has announced that it will join the Flare Network network to join the Ethereum network. A technical point has also been reached in the ETH-BTC scissors. The BTC-led market did not breathe ETH and other sub-markets. Now, if we can technically see a recovery, we can see ETH and lower movement along with decreasing miner fees.

When we consider ETH / USD technically, there is a positive mismatch between momentum and price bottoms in the 4-hour period. In ETH, which continues its slope in the descending direction after exiting the ascending channel, the $ 1300 zone will form major support while the $ 1470 level will be our current Fibo'23.6 resistance. Since there is no break in the continuation of the movement, we cannot talk about an acceleration for now, but the prices that find support are trying to react. 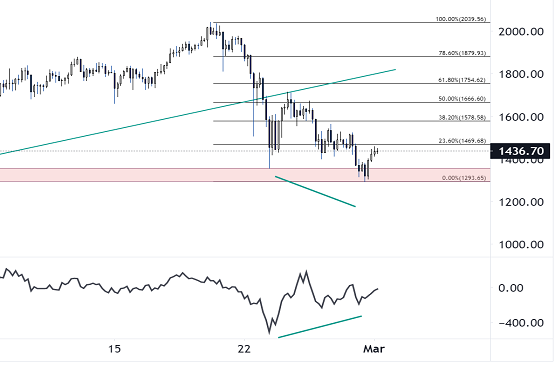 The AVAX / USD pair is trading at $ 24.60 this morning, up 3.6%. In the previous week, the coin called Fantom and AVAX announced their cooperation, and Fantom is ranked 49th in terms of market value and is among the DeFi projects. Thanks to this collaboration, we can say that the developers of AVAX have drawn a forward-looking portrait of trust in the eyes of investors. Within the scope of the project, it is planned to create two block chains linked with multiple chains. After the Pangolin update, the problems that arise while it is expected to bridge the Ethereum network and the unlocking of new AVAXs on March 9 may create price movements in AVAX this week.

When the AVAX / USD parity is analyzed technically, it is seen that the declining channel that started to form on February 10 continues and weakens the parity. Previously, the $ 27.50-28.00 zone was the resistance and support zone, while today's major level will be followed. However, the expectations for AVAX are a little more below performance, while the horizontal trading strategy continues. 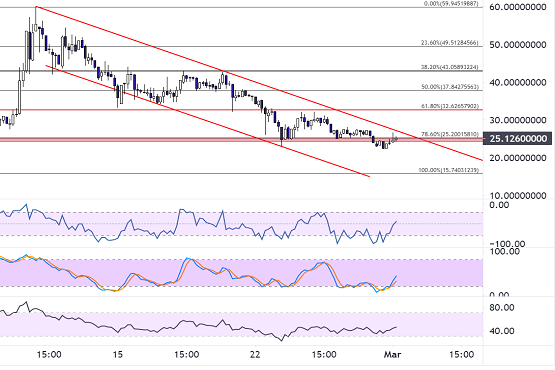 The XRP / USD pair is listed at around $ 0.42, up 1% this morning, and has lost 10% over the past 2-day weekend. However, we can say that the aforementioned withdrawal is not like a situation that occurred after the news of the case with the SEC and only covered XRP, on the contrary, it started to move in the market direction, which allows XRP to be re-adopted. It has been announced by Ripple developers that the new version of the XRP Ledger is being prepared and the XRP Ledger, which is critical for XRP users, will now serve with improved software and increased efficiency.

Looking at the XRP / USD pair technically, prices below the $ 0.45 level above the Fibo'23.60 zone reflect a weak picture for the pair. Although the reverse pennant formation that we have been talking about for the last week has already signaled a possible decrease in the $ 0.30 region, there is still a chance for a reaction from the $ 0.36-0.38 level. On the other hand, the dominance of XRP investors, which could start the bull cycle by decreasing sales, could shorten the reaction process and create positive pricing above $ 0.45. However, if the outlook is evaluated for now, the XRP / USD parity seems to delay the upward expectations in the short term. The outlook is horizontal for now but XRP transactions are gradually being welcomed in retreats. 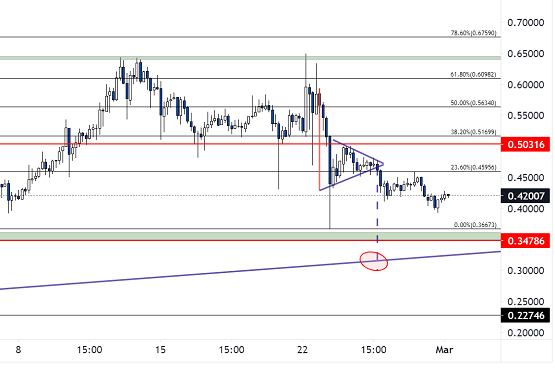 Litecoin posted a positive 23% of monthly returns, but remained in the minus 20% on a weekly basis. Although the decreases and rises in the leadership of BTC have been determinant for Litecoin in the last week, the quantitative indicators on the BTC side giving positive signals for the next medium term may also be positive for Litecoin. Still, it is much more suitable for long-term value investors, as the yields are slower.

When we consider the LTC / USD technically, we continue to maintain our weekly double bottom and target of $ 270. The major uptrend that started on December 11 is maintained and there is support at the $ 158 trend level for LTC, which traded at $ 165 in the morning. This level is also the 50% slice of the Fibonacci retracement and reactions here can be expected to be strong. Even though we maintain our positive expectations in the medium-long term, if we stay above $ 158, the course is horizontal for now. 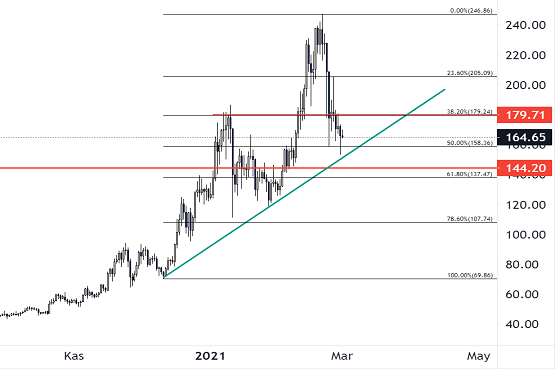 The LINK / USD parity is moving closer to flat at $ 24.85 this morning, with a 1% increase. The downward wave, which has also spread to Ethereum and other altcoins in the last week we left behind, was also effective on the LINK side and lost its investors by 20% on a weekly basis. However, we see that the weekly scissors between Chainlink and Ethereum, which has ETH consensus, is closing. On the ETH side, the upcoming "optimism" update may push the scissors towards the positive side in the future. Chain data show that monthly transfer volumes declined to a one-month low. Now that whale accounts are known to have most of the circulating LINK supply, the LINK investor seems to have entered a quieter waiting period rather than making a sell by taking the opportunity to drop.

When the LINK / USD parity is analyzed technically, it is seen that the prices above the $ 24.70 level in the Fibo'23.60 slice are trying to hold on to the 4-hour candlestick closing. As long as it remains below this level, an 8% decrease scenario will be anticipated due to the reverse flag formation and the formation target. However, the strong support of the $ 24.70 level can carry LINK to the $ 27.00 zone and we can expect the upward trend to accelerate after this point. The strong reaction at the bottom levels keeps the weakness or bear cycle in the background for LINK. 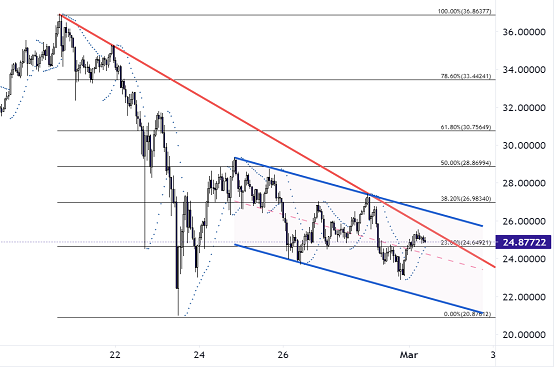 The BAT / USD pair is listed at $ 0.53 this morning, with an increase of 2.5% on a daily basis. The uptrend channel created as of February 23 seems to have increased the upward trend by reducing sales pressures with the recovery of lows. When we look at the chart of the major downtrend from a wider perspective, it causes a bearish view, but the mentioned trend is above $ 0.58 and we will point out that the correction may be over if the upward break of this level occurs. But we have to confirm that the bullish channel has prevailed over the downtrend by waiting for the 4-hour four-hour candlestick close above $ 0.58. In regions below this level, $ 0.51 will be the first support. 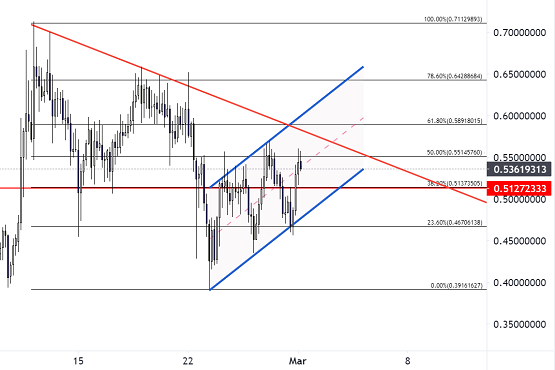