Clayton has frequently promoted Bitcoin (BTC) as a store of value during his time as chairman of the SEC. Jay discussed Bitcoin and how it should be controlled in the future during his appearance with CNBC's Squawk Box broadcast on Wednesday.

Valkyrie Funds launched its exchange-traded fund (ETF) yesterday, which tracks public companies that keep Bitcoin on their balance sheets. The new ETF aims to provide investors with exposure to Bitcoin by retaining firms that invest, trade or hold Bitcoin on their balance sheets, directly or indirectly. This includes companies such as MicroStrategy, Block (formerly Square), Tesla, Coinbase and PayPal, among others.

ECB and Bank of England Grapple with Inflation

The monetary policy committee of the Bank of England (MPC) decided to raise the bank rate to 0.25% on Thursday in order to reduce inflation, according to the minutes of the committee. The committee voted eight to one in favor of a rate hike. ECB's interest rates have not changed. Similar to the Fed's policy, ECB plans to reduce net asset purchases before raising rates. Eurozone inflation is expected to remain high next year but falls over the year, reflecting the UK and the US outlook.

The growth rate of CME's Ether futures has reached a new record high, pushing it into the forefront of futures trading. For the first time, the total open interest on CME has surged above $1 billion amid growing popularity for ether futures trading, making it an important trading platform for Ethereum futures.

According to a report published by Reuters on Thursday, the Central Bank of Russia is trying to ban citizens from investing in Bitcoin and cryptocurrency due to concerns that the activity will pose a risk to the country's financial stability.

According to the data available now, about $800,000 worth of burn is taking place every hour in Ethereum (ETH), the second-largest cryptocurrency by market capitalization. Ethereum burns began after the network's London hard fork release on August 5.

Bitcoin gained a 0,50% value during morning hours; the current price is $48.897. When we consider the BTC/USDT pair technically, Bitcoin, which continues to move within the downtrend that exists as of November 10, retreated yesterday after the resistance near Fibo'38,20. BTC is still in the gray zone; a buy signal comes from the intersection of DEMAs (7-and-14-day). It is impossible to speak of a clear rise without a breakout of the downtrend. It broke the downtrend on momentum metrics; there will be effects on price movement. 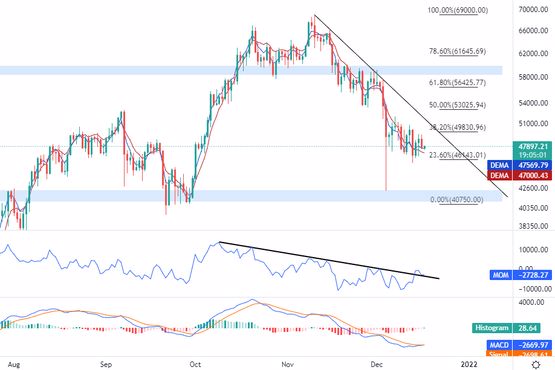 Ethereum gained a 0,60% value during morning hours, and the current price is $3975. The growth rate of CME's Ether futures has reached a new record high, pushing it into the forefront of futures trading. For the first time, the total open interest on CME has surged above $1 billion amid growing popularity for ether futures trading, making it an important trading platform for Ethereum futures.

When we consider the ETH/USDT pair technically, ETH, which broke the $3931 (Fibo'61,80) two days ago, retested this level yesterday. But it could not hold onto the resistance levels of $ 3940-4030; it suffers from momentum deficiency. So the sales pressure has yet not ended. However, if it holds onto it, there might be an upward price movement, or it fails and retreats to the Fibo'50 level. 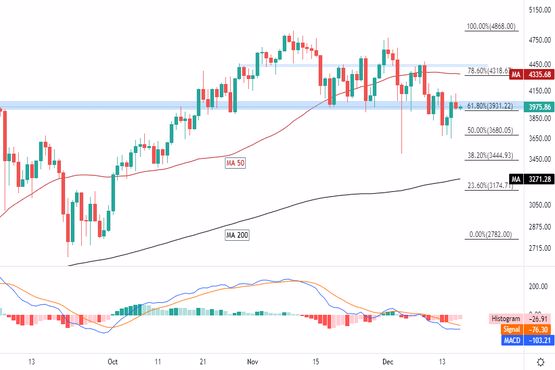 AVAX gained a 4,9% value during morning hours, and the current price is $102,15. When we consider the AVAX/USDT pair technically, AVAX started to drive price action inside the ascending channel of August after finding support at the zone marked with blue. And it retested the lower line yesterday.  As of this morning, we think that if the channel is not broken down again in AVAX, which is seen as holding onto it, the rises towards the midrange band might continue. If there is a daily close under the channel lower line over the daily chart, the above outlook loses validity. 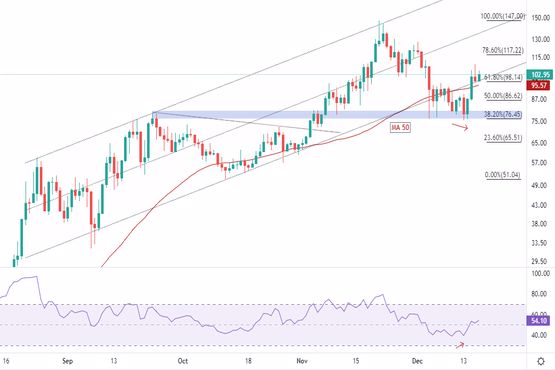 Ripple gained a 1,30% value during morning hours, and the current price is $0,8134. When we consider the XRP/USDT pair technically, the XRP outlook has not changed. XRP continues price action inside the downward trend on September 7 and has positive divergence, as we mentioned in the bulletin yesterday. The instant buy signal and Fed statements relieved the market, and XRP could go up the downtrend. However, we cannot discuss a consistent rise without seeing a breakout. In order for the sales pressure to decrease, the downward trend should be broken. However, when we look at the current state of the 50- and 200-day moving averages, we see the death cross is coming. This is an element that suppresses the upward price movement. 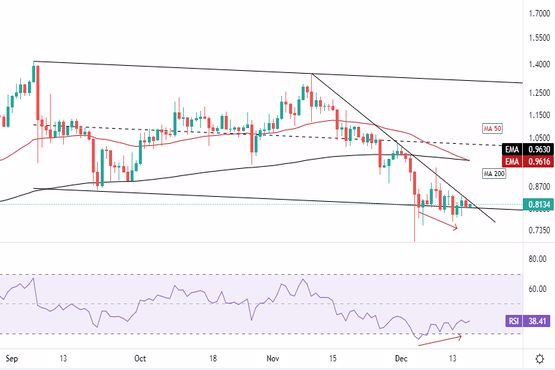 LTC gained a 1,10% value during morning hours, and the current price is $149,0. When we consider the LTC/USDT pair technically, LTC found support at the support level marked with blue yesterday and rose after the statement at evening. LTC is eventually about to give a buy signal. The breakout of the downtrend is important. The support zone at $141-144 should be followed when retreating, but in order for the rise to come true, the breakout of the downtrend and also the 200-day moving average corresponding to this level should be followed. 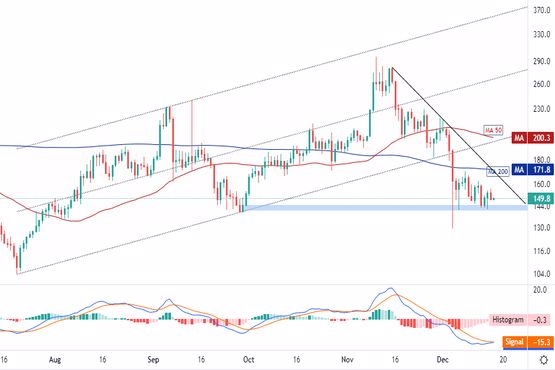 LINK gained a 2,10% value during morning hours, and the current price is $19,14. When we consider the LINK/USDT pair technically, LINK, which continues price action inside the ascending channel as of July 2020, has found support at the lower line in the last few days. After a long time, the daily close should be expected to confirm this buy signal of MACD. Along with the buy signal and breakout of the trend, a sales pressure can occur. It can result in a downward momentum if it holds onto the lower line in the daily chart. 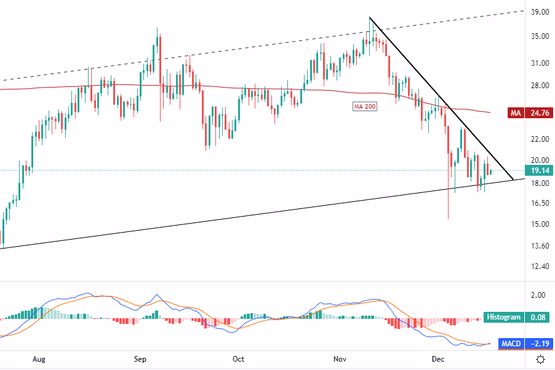 BAT gained a 2,3% value during morning hours, and the current price is $1,1578. When we consider the BAT/USDT pair technically, BAT tested the uptrend on 30 October and held onto it. BAT closed the day below $1,1664, despite the breakout of the same level. As of this morning, it is important to ensure permanence at the daily close of the BAT, which is rising again towards the 50-day moving average. 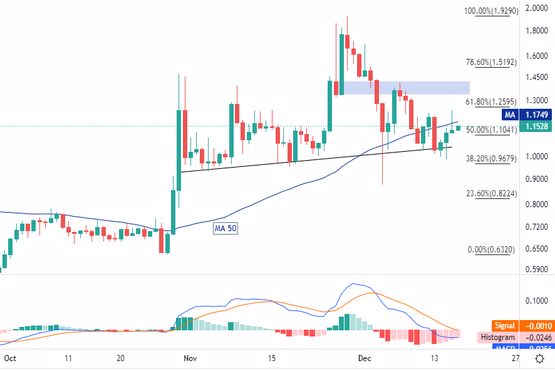