U.S. asset management giant GoldenTree Asset Management, which has $45 billion in assets under management, said it had added Bitcoin, which it described as a leading crypto asset, to its balance sheet.

Wealthfront to Offer Cryptocurrency Investment Service to Customers Through Grayscale
Wealthfront, a California-based investment provider with more than $25 billion in assets under management, said its users can now diversify their portfolios by allocating Grayscale Bitcoin Trust (GBTC) and Grayscale Ethereum Trust (ETHE) funds.

German Institutional Funds Can Now Evaluate 20% of Portfolios with Crypto

Under a new law coming into force next week, some German mutual funds will be able to hold digital assets with a total of 20% of their portfolios. This is described as indicative of the growing demand for the sector from various institutions.

Global Cryptocurrency Adoption Has Doubled Since January to 221 Million Users

The report found that the rise of the DeFi movement was a Tesla says the adoption of cryptocurrency by the likes of Visa, Mastercard and Microstrategy, and El Salvador's acceptance of Bitcoin as a legal tender, are important events that help make cryptocurrency even more popular.

Bitcoin, which has a horizontal price movement in the morning, is priced at $39,765. While the recovery in the 7-day average of active and new address numbers for Bitcoin continues, BTC transfer from exchanges to wallets continues, which are important positive factors for Bitcoin price growth.

When we consider BTC/USDT parity technically, BTC, which broke the existing horizontal channel upper band upwards on the night of July 30, did not hold above this level, which amounted to $40,900, and closed at $39,865 yesterday. At the same time, it maintains the sell MACD signal in a 4-hour period for BTC, which has also broken the rising minor trend that exists as of July 20th. If the withdrawals, which are the correction of the recent rapid rise in Bitcoin, continue, we expect it to find support at $38,250 and $36,400, respectively. The upward trend will continue in the coming days if the daily close of $40,900, which coincides with the fast recovery and the channel upper band, occurs. 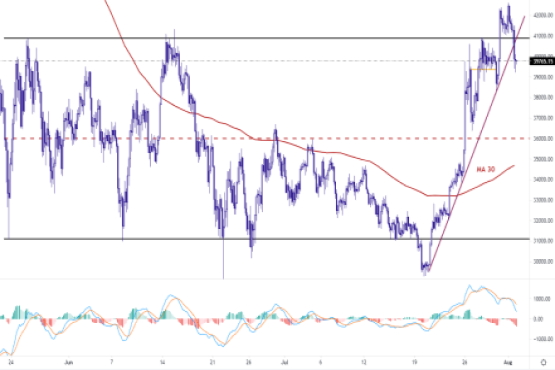 Ethereum, dominated by the horizontal price movement in the morning, is priced at $2552. When we examine the chain data for Ethereum, we see that the net inflow/outflow amount to the exchanges is still negative when we look at the 7-day average. The outlook for ETH is positive, given the continued exit from the stock markets, the upward movements that have occurred and the updates expected to take place on August 4th.

When we consider the ETH/USDT parity technically, ETH, which saw rises towards $2727, which coincided with the Fibo'50 tranche yesterday, was met with a reaction from the level of $2700. When we examine it in the daily period, we see that the MACD maintains the al signal. We expect the Fibo'38.20 tranche of $2439 to work as support for ETH withdrawals. Our medium-term price target of $3300-3500 for ETH, where the binary dip pattern remains valid, remains valid

AVAX, which gained about 0.70 percent in the morning, is priced at $12.94. When we examine the AVAX/USDT pair technically, AVAX, which has been moving prices for a long time within the existing rising channel as of July 20, broke the channel sub-band with downward volume last night. It reached $14.07 over the past two weeks, generating a return of about 51 percent. When we examined it in the 1-hour period, the pullbacks accelerated with yesterday's sell signal on MACD, which now stands at $12.77, which corresponds to Fibo'23.60. MACD, which is in the oversold zone, is recovering slightly. If $12.77 breaks down, our next support level is Fibo'38.20 tranche of $12.03. 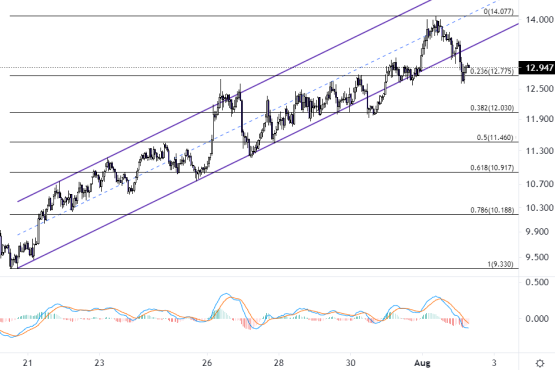 Ripple, which gained about 1.2 percent in the morning, is priced at $0.733. Last week, there were strong price movements with the positive news flow prevailing in XRP, generating returns of over 50 percent in the last 2 weeks. When we consider the XRP/USDT parity technically, the daily close was below the support level of $0.734, which falls at the June 29 peak level. XRP, which has received support from the region close to $0.712, which coincides with the rising minor trend as of July 20, maintains the MACD buy signal in the daily period. If the rising minor trend breaks downwards, there could be a retreat towards $0.666, with Fibo's 23.60 tranche and also the 50-day moving average. 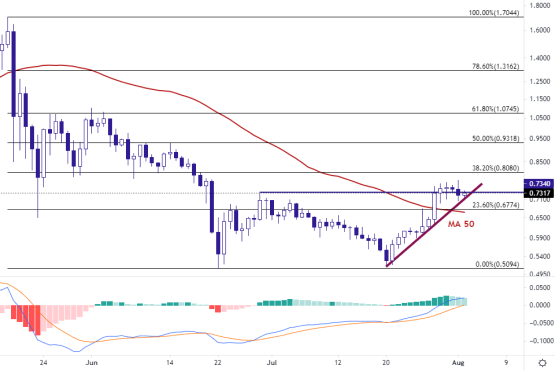 Litecoin, which gained about 0.70 percent in the morning, is priced at $141.19. When we examine the chain data for LTC, which has returned slightly behind the market with about 45 percent over the last 2 weeks, it shows that these prices are suitable for long-term investment for the MVRV Z-Score LTC, which allows us to compare the current price with its fair price.

When we consider the LTC/USDT parity technically, LTC, which recently closed above Fibo's 23.60 tranche above $143.71, reacted from resistance in the region of $147 yesterday, again falling below this level to its daily close at $140. We expect this level to work as support for LTC, which is priced above the 50-day moving average. If $147 breaks upwards and the daily close is above this level, we could see rises towards our next target price of $175. 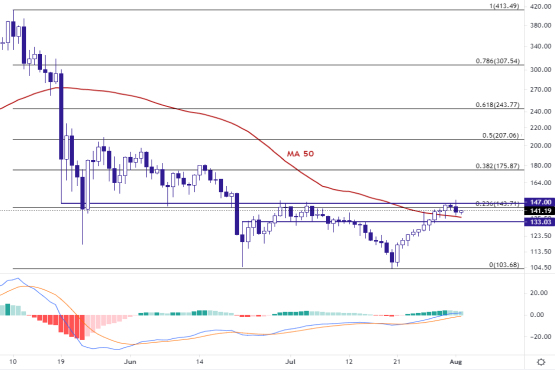 LINK, which dominates the horizontal price movement in the morning, is priced at $22.09. When we examine the chain data for LINK, we examine the 7-day averages of the number of active addresses and the number of new addresses, which have been declining for a long time, and it is seen that the rises have started. With the market conditions turning positive, we see an increase in the interest of new and old investors in LINK.

When we consider the LINK/USDT parity in technical terms, LINK continued to move in price within the existing rising channel as of July 21, and yesterday it experienced withdrawals towards the channel sub-band ($21.2) with resistance from the region close to the $24 level that corresponded to the channel upper band. For LINK, which appeared to find support at these levels, MACD signaled sell over a 4-hour period. For LINK, which has generated about 80 percent returns in the last 2 weeks, withdrawals towards $20 can be expected if the channel sub-band breaks downwards. Fibo'38.20, at $22.64, is important for sustaining upward fraying.

BAT, which lost about 1.4 percent in the morning, is priced at $0.65. BAT, which has been positively divergent from the market as a whole over the last 2 weeks, has delivered a return of about 59 percent. Especially in the last few days, the price movements have risen sharply to the levels of $0.723. When we consider BAT/USDT parity technically, BAT, which broke its existing horizontal channel upwards on July 31st, rejected the level of $0.643, which corresponds to the upper band of the channel, this morning and found support. When we look at it over a 4-hour period, we see a sell signal on MACD. If the channel upper band is held and the MACD recovers, the next target is $0.80. If a four-hour close comes under the upper band of the canal, BAT may have retreats towards $0.60. 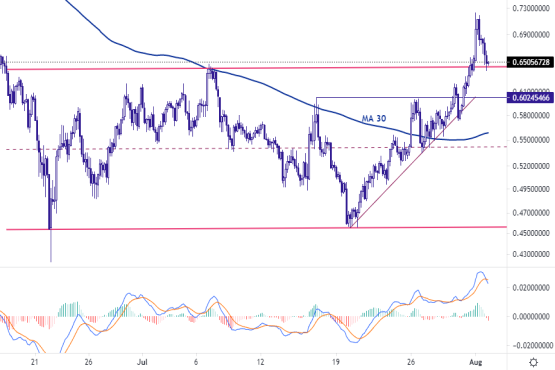