Oil giants plan to switch to Bitcoin mining to reduce harmful greenhouse emissions such as methane from gas burning. Alexander Kalmykov, head of Gazprom Neft, said, "This will increase the percentage of rational use of raw materials." said.

Yesterday, Square said, "I'm not going Australia has announced it will buy Afterpay, a financial technology company operating in the United Kingdom, Canada, the United States and New Zealand. However, more than seven million customers using Afterpay will be able to use features such as buying Bitcoin.

The American Bankers Association (ABA) has released a new report suggesting that banks consider partnerships with cryptocurrency firms based on the industry's growing profitability and customer interest.

Bank of America said there are some benefits to adopting Bitcoin as a legal tender in El Salvador. Opportunities include low-cost remitnings, financial digitization, more options and more investment opportunities from foreign companies.

Digital Asset Funds Have Exited
Bitcoin-focused funds totaled $19.7 million. However, there appears to be net inflows into funds that focus on other categories, including multi-asset funds.

Bitcoin, which lost about 1 percent in the morning, is priced at $38,767. When we examine the chain data for Bitcoin, it shows that SSR (6.78) is still at a low level, that is, the current supply of stablecoins on the exchanges has sufficient purchasing power for BTC. Although Tether entry to the stock markets is not seen, the supply that is already available is seen at the appropriate levels to move the market upwards.

When we consider BTC/USDT parity in technical terms, Bitcoin, which recently started to be priced again within the existing horizontal channel as of May 23rd, started the correction movement by breaking the rising minor trend downwards. Priced about 10 percent below its August 1 peak, Bitcoin is priced close to its initial support level of $38,340. When we examine it in a 4-hour period, MACD continues to sell. If a four-hour close comes in below $38,340, our next support level is in the 36,400-36,000 band. 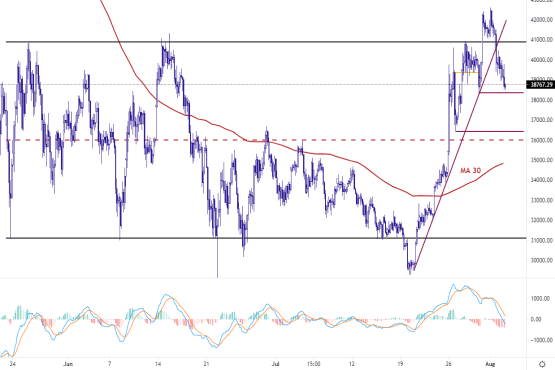 Ethereum, which lost about 2.3 percent in the morning, is priced at $2538. When we examine the chain data for Ethereum, it is seen that the addresses containing 1,000 to 100,000 ETH in their wallets have 39.2% of the total ETH supply. That's the highest level since May 17. Large investors continue to add ETH to their portfolios. We think that this rate will increase in the coming period and will have a positive effect on the price.
When we consider the ETH/USDT parity in a technical sense, yesterday's rises were relatively limited compared to the previous day. ETH, which quickly returned about 59 percent, has seen a backlash from the region close to $2727, which corresponds to Fibo'50, and there is a slowdown in the upward momentum. When we examine it in the daily period, it appears that the MACD maintains the al signal. Levels that can support correction movement for ETH Fibo's tranche of $38.20 is $2439 and the 200-day moving average is $2160. 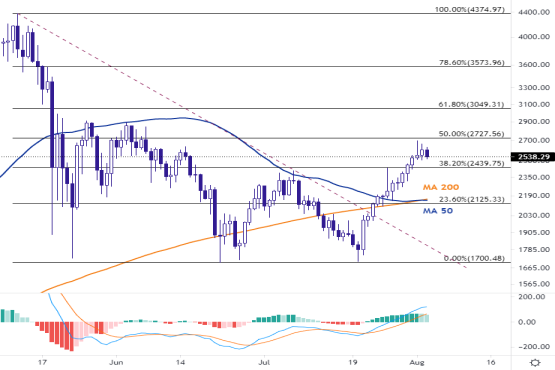 AVAX, which lost about 3.3 percent in the morning, is priced at $12.57. When we technically examined the AVAX/USDT pair, AVAX, which has been moving prices in the existing rising channel for a long time as of July 21, broke the channel sub-band down from $12.87 in the morning and fell below the level of $12.77, which corresponds to Fibo'23.60. If the correction movement for AVAX continues, the next level we expect to find support is $12, which is both the 50-day moving average and Fibo's 38.20 tranche. 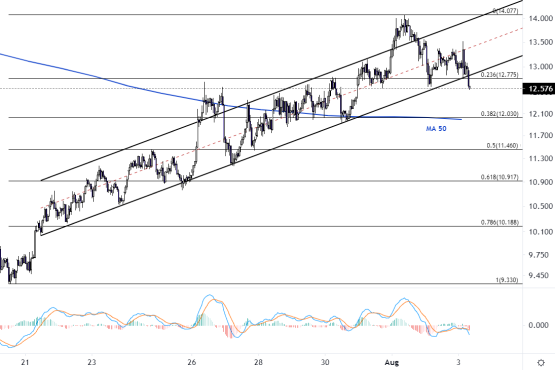 Ripple, which lost about 3.32 percent in the morning, is priced at $0.712. Yesterday, XRP, which was supported at $0.72, coinciding with the rising minor trend as of July 21, rose towards its August peak of $0.7778. Affected by market-wide and especially BTC retreats, XRP broke its rising minor trend and horizontal support level down from $0.734 and closed at a 4-hour close. If there is no rapid market-wide recovery, our major support for deep corrections in XRP is $0.665, which equates to the 50-day moving average. 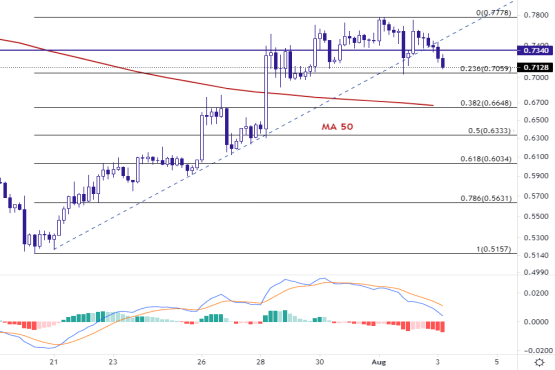 Litecoin, which lost about 1.9 percent in the morning, is priced at $138.70. When we consider the LTC/USDT pair technically, LTC, which recently reacted to the resistance level at $149, could not hold above Fibo'23.60 tranche of $143.71. LTC, which tested the Fibo'23.60 tranche again today, was unable to break that level upwards at $143.71. Although MACD continued to signal the buy during the daily period, the momentum towards the rise was lost. For LTC, we expect the $135.5 level with a 50-day moving average to work as support for withdrawals. 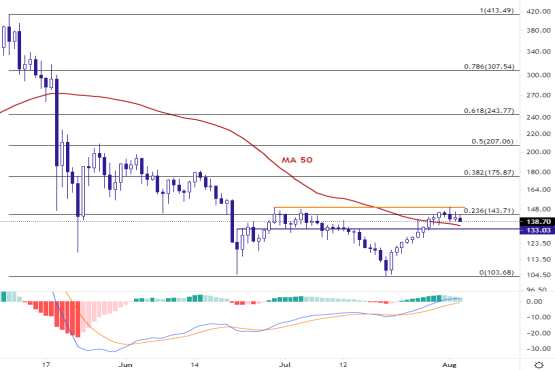 LINK, which lost about 1.75 percent in the morning, is priced at $23.05. When we examined chain data for LINK, the number of active addresses and the 7-day averages of new addresses started to rise. However, when we look at the 7-day average of net flow to the exchanges, there is a decrease, but there is a LINK transfer to the exchanges. The view in the chain data is neutral.

When we consider LINK/USDT parity in technical terms, LINK, which has risen in contrast to the market with the daily candle opening yesterday and today, reached 24.43 dollars. When we examine LINK, which continues to move prices within the existing rising channel as of July 21st, in a 4-hour period, the sell signal is maintained on MACD even though the price rises continue. With the withdrawals in BTC, there are slowdowns across the market. If the withdrawal in BTC continues for some time, our first level of support for LINK is Fibo'23.60 tranche of $21.2. 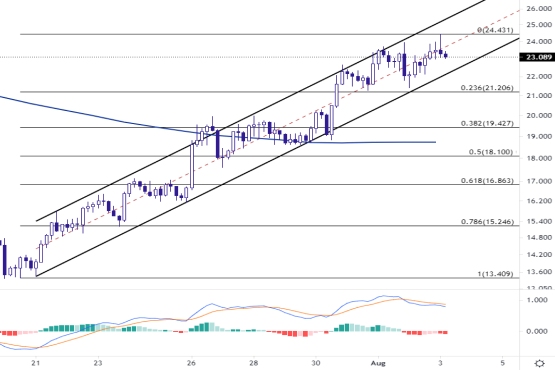 BAT, which lost about 4.74 percent in the morning, is priced at $0.624. When we consider BAT/USDT parity technically, BAT, which broke its existing horizontal channel upwards on July 31, could not hold above the $0.643 level that corresponded to the upper channel band. BAT, which began pricing in the canal last night, is priced below the $0.632 level, which coincides with the rising minor trend. When we examine it in a 4-hour period, the MACD sell signal that came in on August 2 continues. We expect the correction for BAT to continue. If our initial support level does not hold at $0.602, $0.568, which is the 50-day moving average, is our next level of support. 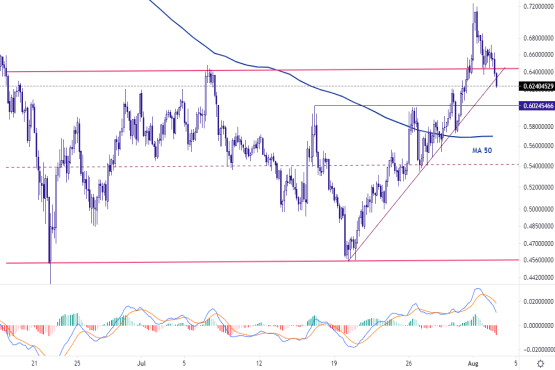