A $500 billion German asset manager is stepping up plans to adopt cryptocurrency after evaluating Bitcoin certificates. Union Investment, the investment arm of the DZ Bank group, is making another move to provide cryptocurrency investment services to individual investors. They plan to convert a small percentage of their funds into BTC.

Big Australian Banks Refuse to Do Business With Cryptocurrency Firms

Two of Australia's biggest banks have ignored criticism of their choices against business dealings with cryptocurrency providers. National Australia Bank and Westpac have responded that their decisions have hampered competition and ultimately industry growth.

The SEC has once again extended its review of VanEck's fund practice traded on the Bitcoin exchange. In an extension statement released yesterday, the regulator said it could not already answer whether it could approve the ETF on November 14.

Months after Bain Capital Ventures announced a new $1.3 billion fund to invest in new companies, it announced the creation of a new cryptocurrency-focused fund, according to public filings.

Cryptocurrency analytics and intelligence firm CipherTrace has been acquired by digital payment technology firm Mastercard. The acquisition aims to increase transparency and support for the global crypto ecosystem, as well as the emergence of a new digital economy.

Bitcoin, which gained about 0.75 percent in the morning, is priced at $46,707. The SEC has once again extended its review of VanEck's fund practice traded on the Bitcoin exchange. In an extension statement released yesterday, the regulator said it could not already answer whether it could approve the ETF on November 14. We think that approving ETFs in america will have a positive effect on all crypto assets. We expect the SEC, which has recently attracted a lot of backlash, to issue this approval before the end of the year.

When we consider BTC/USDT parity in technical terms, BTC, which has been holding above the 200-day moving average of $45,960 since the sharp falls on September 7, continues to have a negative outlook on metrics in the daily period. In a four-hour period, MACD is seen as signaling take today with the start of the day. We expect Fibo'50 to continue to rise towards $49,300 when it breaks the $46,849 level and holds on to it. 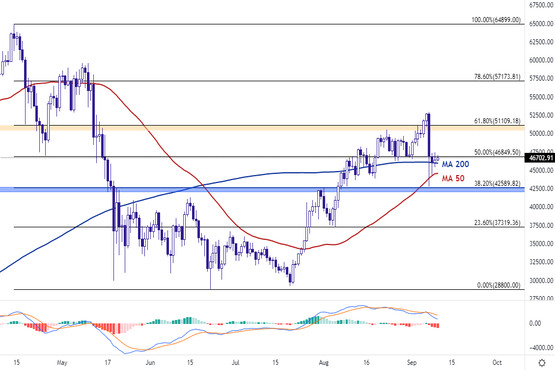 Ethereum, which gained about 1.05 percent in the morning, is priced at $3460.99. The amount of ETH burned exceeded 15,300 yesterday, reaching a record ETH level close to a single day to date. While the amount of reserves held on the stock exchanges continues to decline, at the same time balancing its supply will reflect positively on pricing.

When we consider the ETH/USDT parity technically, ETH continued to hold on to the support level in the band 3290-3375 after the sharp fall on September 7, and closed daily below the 20-day moving average of $3479 yesterday. Short-term metrics are showing signs of recovery for ETH, which retests and resists this level in the morning. As long as ETH continues to hold on to the support area, it will continue to rise towards $3572. If the support area breaks downwards, there may be withdrawals towards the 50-day average. 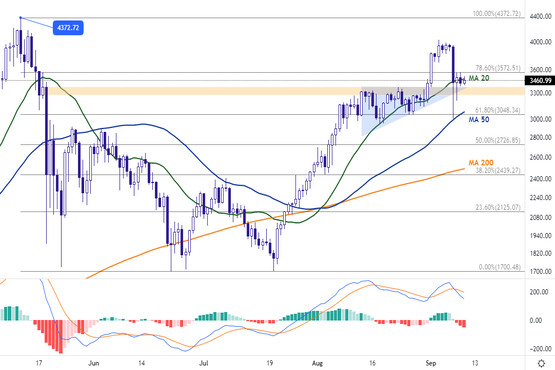 AVAX, which gained about 11.1 percent in the morning, is priced at $45.17. When we examine the AVAX/USDT pair technically, we read the price movement below the support level of $38.16, which corresponds to Fibo'23.60, as a violation. AVAX, which gained momentum in the upward direction with the re-break of the $38.16 level, has seen rises towards $48.5, which coincides with the downward minor trend that existed as of August 24, as mentioned in the bulletin yesterday. We think this level will break upwards and continue to rise with next day's close. 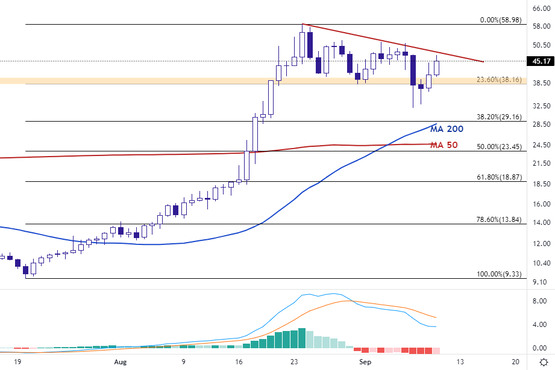 Ripple, which gained about 4.65 percent in the morning, is priced at $1.1386. When we consider the XRP/USDT pair in technical terms, XRP, which is up about 15 percent with the daily candle opening today, has risen to $1.2379, which corresponds to the Fibo'50 slice. This price target, which we mentioned in the bulletin yesterday, has been reached. In XRP, which is resisted by this level, which corresponds to the Fibo'50 slice, it is seen as receiving a get signal from MACD in the short period, as opposed to in the daily period. The most important support level to follow for XRP is seen as close to the level of $1,065, which corresponds to Fibo'38.20. 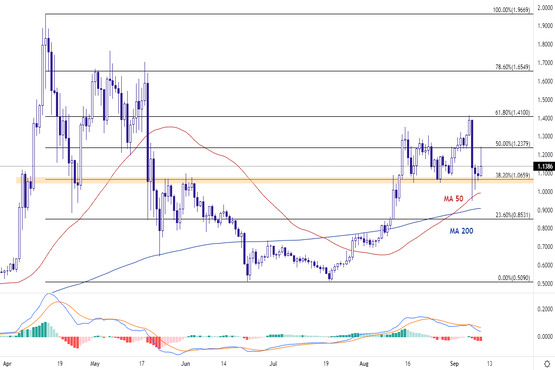 LTC, which gained about 1.42 percent in the morning, is priced at $183.2. When we consider the LTC/USDT parity technically, LTC found support from the 50-day average of $163.3 after the sharp declines on Tuesday, and with its support, it held above the level of $175.9, which corresponds to Fibo'38.20. Looking at the short-term metrics, it appears that in a 4-hour period, MACD signaled buy with the opening of the day today. If a breakdown occurs above the 200-day average with the effect of short-term positivity, the rises may continue with the recovery in the journals. Our major support level for LTC withdrawals is $166, which corresponds to its 50-day moving average. 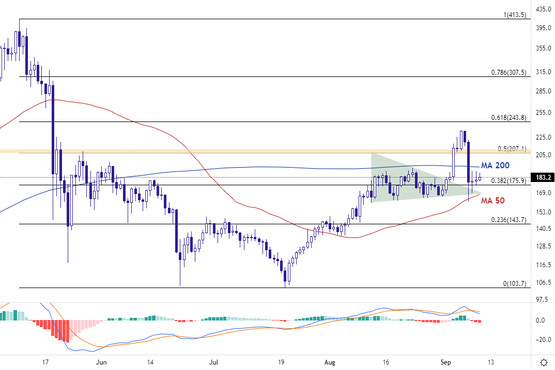 LINK, which gained about 1.75 percent in the morning, is priced at $28.78. When we examined the LINK/USDT parity in technical terms, LINK, which found support from the region of $24.60 with a 50-day moving average despite the sharp declines as of September 7, closed above the 200-day moving average of $27.91 with yesterday's rise.

In LINK, which closed daily yesterday below its 200-day moving average, the momentum towards sales is seen as diminishing. Although it signaled stokastic sell in the daily period, when we examine the metric that moves away from the overbody zone in the short-term period, we see that the buy signal is coming. When the daily close occurs again over 200 days, there may be an upward trend towards $31. 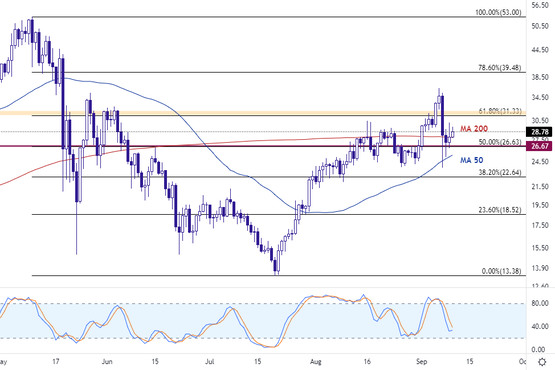 BAT, which gained about 1.1 percent in the morning, is priced at $0.831. When we consider BAT/USDT parity in technical terms, BAT, which has fallen to its 50-day moving average with the downward break of its existing rising trend as of July 20, has risen towards $0.85, which corresponds to its 200-day moving average, with the support it found from this level, as we mentioned in the bulletin yesterday. The take signal from MACD over a four-hour period indicates that the downward movement is losing momentum in the short term. For BAT, the support level for withdrawals is $0.794, which equates to Fibo'38.20. 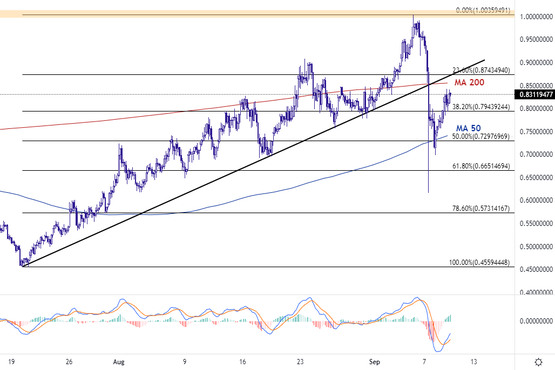