SC Ventures, the innovation and initiative arm of Standard Chartered, partnered with Northern Trust to start a crypto custody business. The new business, called Zodia Custody, will start in London. Zodia will provide custody services for Bitcoin (BTC) and Ethereum (ETH) and will then support more cryptocurrencies in the future, including XRP, Litecoin (LTC), and Bitcoin Cash (BCH), according to the announcement.

Galaxy Digital's CEO, Mike Novogratz, recently announced that nearly half of his investments are linked to cryptocurrencies such as Bitcoin (BTC). Galaxy Digital CEO emphasized that cryptocurrency has become digital gold.

The Coinshares report shows that Grayscale bought $ 336 million (approximately 78%) of the $ 429 million institutional investors pumped into the market in the week ending December 7. Grayscale has raised $ 4.3 billion in digital assets so far in 2020, and the fund is currently leading the investment package with $ 1.4 billion under management.

MicroStrategy had previously set an expectation that it would invest $ 400 million in Bitcoin. He then announced that it offers $ 550 million worth of convertible bonds and plans to use the net income to buy bitcoin. He estimates that net income from the offer will be approximately $ 537.2 million after deducting the necessary expenses and discounts.

Billionaire Ray Dalio, CEO of Bridgewater Associates, known for his negative comments against Bitcoin, acknowledged that Bitcoin is an alternative investment tool to Gold and stated that attention should be paid to its limited supply. In his last statement, it was seen that he was thinking more optimistically against Bitcoin. He explained that in the last 10 years, Bitcoin and other cryptocurrencies have proved to be limited and good investment assets.

Bitcoin remains steady above $ 18,000 this morning. When Bitcoin fell to the $ 17,600 zone yesterday, the purchases of the two institutional companies prompted an upward reaction. MicroStrategy stated that it will increase its $ 400 million bond issuance to $ 500 million and buy BTC with the majority of the revenue. Grayscale, on the other hand, expanded crypto assets in its portfolio by buying 100,000 Ethereums.

A key issue was the record exit in gold funds and record entry into Bitcoin assets. In the CoinShares data dated December 7 (delayed-release), there was $ 1.4 billion in Bitcoin products in exchange for an exit of $ 9.2 billion from gold funds.

When we consider BTC / USD technically, the bullish blue trend in the chart was tested yesterday. This point also crosses the $ 17,600 level, which corresponds to the Fibo'61.8 slice, where the buy reaction came from a significant area. We can see pressure from this area with our major resistances at $ 18,600 and $ 19,200 in the uptrend. Although there was a 1% decrease this morning, it rose 6% from yesterday's bottom. Therefore, it is useful to follow the course well at my support levels. Despite the short-term declines, the major trend is still on the rise. 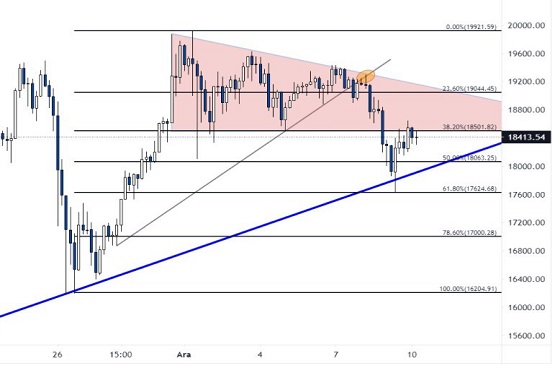 Ethereum is trading at $ 560 this morning, with an 8% response from the $ 530 bottom that it tested yesterday, even though it sold up to 2% this morning. Grayscale, the world's largest digital fund, announced yesterday that it received 100,000 ETH. At the same time, after the 2.0 transition, Ethereum has seen a record $ 429 million in funds in the past two weeks. When we come to the question of why the market is falling despite all these purchases; While the altcoin-Bitcoin relationship is due to the tightness, we also encounter sales of miners in Bitcoin. For this reason, we expect the 2021 DeFi season in Ethereum and expect a positive divergence.

When we consider the ETH / USD parity technically, the upward trend that has been formed since the beginning of November continues. This trend was tested with a slight divergence when tested yesterday at $ 530. The reaction from the bottom is very positive. In the course where the trend is followed, the MACD is moving into the positive risk appetite zone, experiencing a purchase intersection in a 4-hour period. The reactions from pullbacks should be followed, the trend is still upward. 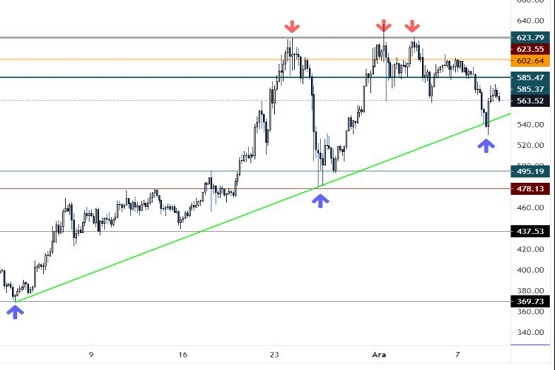 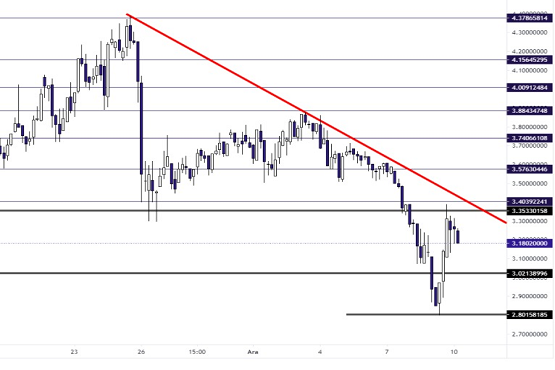 Ripple is moving around $ 57 this morning, down 2% from yesterday's transactions. Ripple sent 266 million XRPs in the account of the company founder Jed McCaleb. According to the data provided by Whale Alert, the value of these XRPs was $ 148 million at the time of the transaction. The expectation of Jed McCaleb to launch and sell these XRPs at regular intervals brought sales in XRP.

Technically speaking, XRP / USD retraces to the $ 0.5230 support level on the four-hour charts. Although it tries to break the downward trend that has been ongoing since November in the upward direction on the four-hour candles six times, it continues to move in the lower zone of the trend. With its rising again, the $ 0.5930-0.6140 levels are in the foreground. If the possible withdrawal continues, $ 0.5660-0.5430 can be considered. 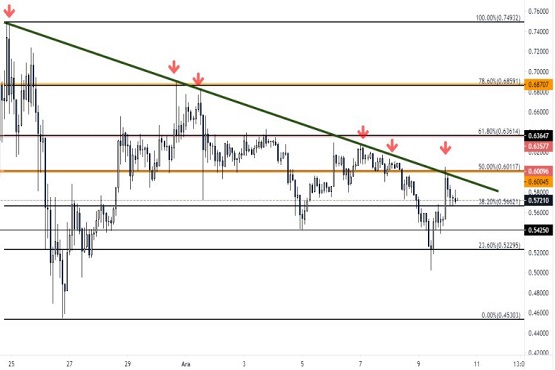 Litecoin is moving around $ 76 this morning, down 2% from yesterday's transactions. According to Glassnode data, the average transaction volume according to daily averages in the last day has reached the highest level in the last three months. Especially with the effect of the withdrawals, the selling pressure in the investors caused an increase in the transaction volume. Support levels are followed, although the outlook is weak.

When we consider the LTC / USD technically, although it was seen to retreat to $ 72 in yesterday's trading on the four-hour charts, it recovered and tested $ 78.40 from the resistances. It continues its weak movements in LTC / USD, which is traded around $ 76 in the morning hours. Movements continued along with the bearish channel, while the $ 72 zone formed a strong support. Unless there is a pullback below $ 65, the target area of $ 103 continues in LTC / USD, where the double bottom formation continues. 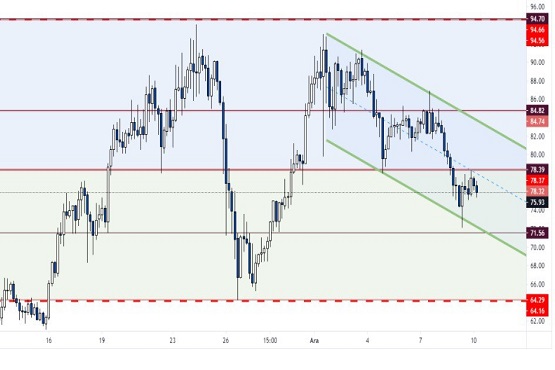 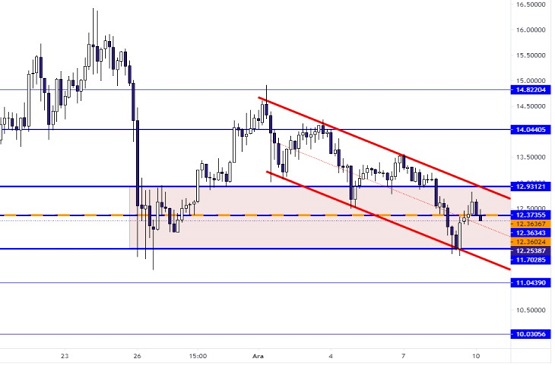 BAT is moving around $ 0.2160 with a 3% retracement this morning based on yesterday's trading. According to Glassnode data, the number of transfers between wallets has more than doubled in the last day, according to daily averages. Although the withdrawals are welcomed for BAT, it can also correspond to the transfers made by investors from cold wallets to stock exchanges. This mobility can bring sales.

BAT / USD continues with sales according to yesterday's transactions. Trading at $ 0.2200 in the morning hours, however, it fell to 0.2180 at noon. BAT has tested the $ 0.2070 major support twice, although it is still in a bearish trend. Strong recoveries were seen from these levels. It is useful to watch the stop reactions. 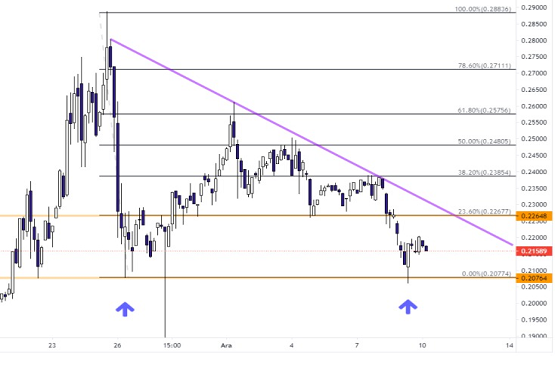