Gold at All-Time Low Against Bitcoin

As Bitcoin broke a record at over $ 50,000, the largest cryptocurrency reached its all-time high in gold. Thus, with one ounce of gold, only 0.0342 BTC can now be bought.

Deputy Minister Made a Statement on CBRT's Digital Currency

Deputy Minister of Transport and Infrastructure Dr. Ömer Fatih Sayan spoke about cryptocurrencies and regulations at an event he attended. In the statements made, it was stated that it grows at an average of 12% every year. In addition, because in Turkey's development plan based digital blockcha the decision of the Central Bank because it takes place, and it continues to work for removal of money was mentioned.

Analysts of JP Morgan, one of the largest banks in the USA, stated that Bitcoin could not hold above the $ 50,000 level. In the report published by analysts, it was stated that retail investors rather than institutional investors fuel the price of Bitcoin.

Bitcoin Is a Gold Rival, Not a Dollar, According to Bullard
James Bullard, President of the Federal Reserve Bank in the US, made statements about Bitcoin and gold in a program he attended on CNBC. Bullard advised that if you want to understand and think about Bitcoin, compare it with gold and "I would classify it as a gold rival and interpret it accordingly." he added.

Facebook-Backed Cryptocurrency Project Coming Out Soon
Libra, a Facebook-led cryptocurrency project and rebranded as Diem, is expected to emerge at the end of this quarter. According to the statement made by Fireblocks and First, both companies are Diem's; It will enable it to be connected to financial services organizations such as banks, exchanges, payment service companies and e-wallets.

Ethereum; In the ranking of assets according to their market value, it has moved itself higher with its market value exceeding $ 200 billion. In this way, Ethereum, which ranked forty-third, has an average daily transaction volume of $ 35 billion.

Bitcoin has been on the rise, refreshing record levels for the past three days. Although BTC traded at $ 52,250 with a 0.5% increase this morning, the change in the number of new and active accounts does not seem to be a voluminous or participatory increase. In addition, the funds in Grayscale, which purchased a limited amount of BTC yesterday, give more weight to Ethereum. BTC is still the more premium side in the BTC-ETH scissors. In addition, the Gold-BTC clipper is at an all-time low. For now, BTC maintains its popularity while market dominance is moderate at 61.2%. On the other hand, altcoins are trying to start their own season, while keeping the record definitions.

When we consider BTC / USD technically, if the uptrend that has been occurring since December turns into a channel, BTC is at the short-term peak of the current formation. There is a decrease in momentum over the daily period in conjunction with the price touching the upper band of the channel past the $ 52,300 level. However, as we are still in the bullish channel, the first correction zone is $ 50,000, and if the $ 52,300 level cannot be broken, this zone may be a horizontal and congestion area. 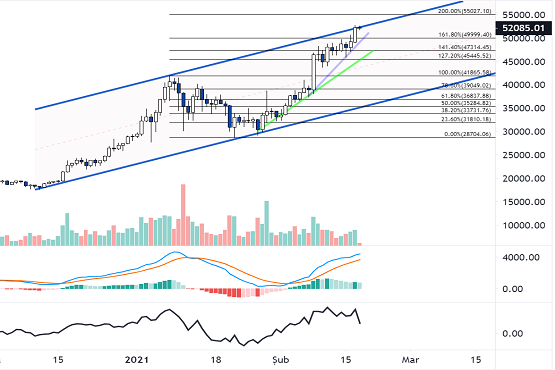 Ethereum has been following a horizontal trend, lagging behind the Bitcoin rally for the past few days. With China's return from vacation, ETH's new record against the dollar came in the Asian bar. Testing the $ 1920 level, ETH / USD is trading with an increase close to 3%. While Bitcoin dominance has been high for the altcoin season yet, Ethereum growth is more linear for now. Although network fees are still at a level that we can call higher, the volume from the Asian market shows the buying appetite.

When we consider the ETH / USD pair technically, the flag formation, which points to the $ 2060 level, continues. However, in ETH / USD, where we watch an upward channel movement, the upper band of the channel points to the $ 1970 level. The MACD signaled a buy in the four-hour period. Yesterday's correction also returned from the channel midband. The $ 1850 level is our channel mid-band and the starting point of the movement, while momentum is moving in a positive direction. 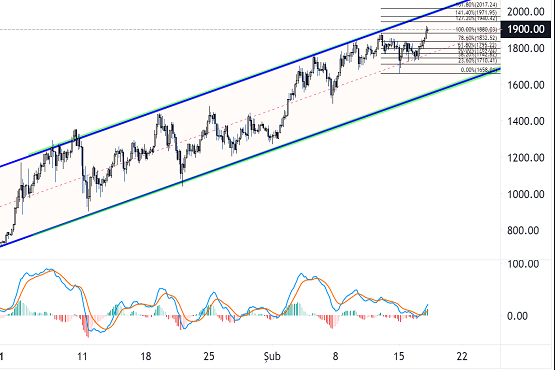 AVAX has become one of the most positively differentiated cryptocurrencies in the market on a daily basis, with a 10% increase this morning. Having experienced a volumetric rise in recent years with its successful project, AVAX fell to $ 34.00 after seeing the $ 60.00 level, creating a "discounted" perception for AVAX in the market. This brought along high expectations with low cost and enabled it to attract new buyers. On the other hand, AVAX continues to be listed on different exchanges, which helps it grow in popularity and increase its depth.

When the AVAX / USD parity is analyzed technically, after holding on the $ 36.00 downtrend, this region was brought to a support level and the movement started from here. The Fibo'50 correction is also close to the $ 38.00 level just below pricing. Thus, this level can be expected to support the upward movement. For prices heading towards the $ 40.00 band, the first resistance will be the $ 43.00 level. Oscillators also give positive signals on the positive side. 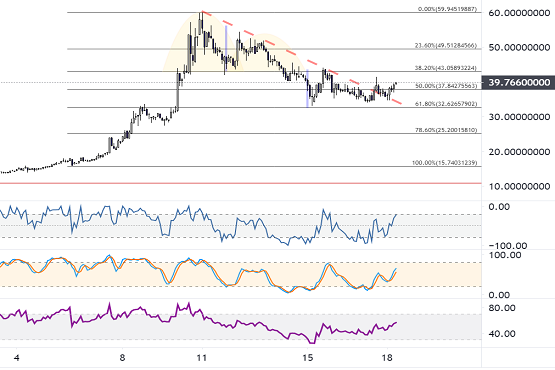 Ripple came to the fore this morning with XRPs transferred to the stock markets by the company. Ripple executives' wallets have been signaled for resale, and 30 million XRPs have been dismantled, followed by Whale Alert. Although XRP investors are focused on the case, these developments before the lawsuit will be very important in terms of pricing. For XRP with a daily trading volume of over $ 6 billion, these sales may not be enough to create price volatility, but may have negative effects on investor psychology. Priced at $ 0.5530, XRP is up 4% on a daily basis.

When the XRP / USD parity is considered technically, it is seen that the consolidation period ended on January 28 and the recovery phase has started on the uptrend. There was a support level above the trend of $ 0.5300 and a hold was held around this level. The doji, seen on the 4-hour chart, signaled a reversal, and prices managed to stop the downward trend and close candlesticks with slight increases at the trend level. Reactions from the $ 0.5300 resistance zone, which should be followed during the day, may again bring the $ 0.5800 zone to the agenda. The view is positive close to the horizontal.

formed will continue unless the $ 0.5330 level is broken upwards and there may be returns from here. The view is horizontal. 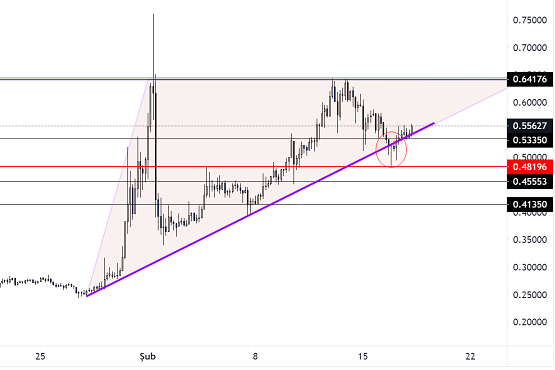 The LTC / USD pair is pricing at $ 230 this morning with a 3% negative price move. Litecoin has surged close to 30% this week, and in other words, it has broken its chains. However, other projects that quickly raised investor interest caused Litecoin to fall from the top five to eighth in terms of market cap. For a while, the slower course compared to the general market showed an inverse correlation with the increased risk appetite and created instability for pricing. After the records of Bitcoin, Litecoin also increased its pricing as one of the cryptocurrencies with the highest correlation with Bitcoin.

If the LTC / USD parity is examined technically, the horizontality that deteriorated with the second week of February caused the prices to move up in the rising trend zone. If the price above the Fibo 61.80 correction zone does not gain a strong momentum, it may move back to the trend zone, which is the $ 215 zone. However, the reactions to be given at this level are expected to be stronger. Although resistance-supports are followed for daily transactions in close marking, when one step back, the double bottom, which we mentioned in our previous bulletins, draws attention. The target zone for the double bottom formation is $ 270. 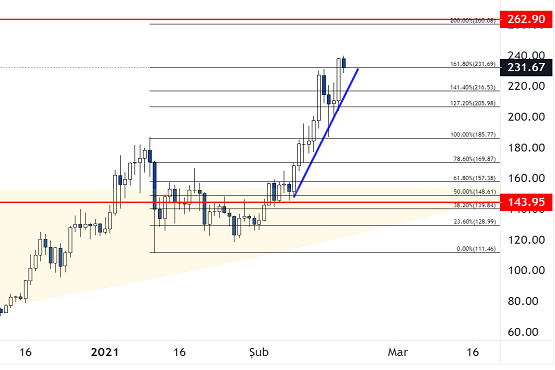 LINK is listed this morning at $ 33.00 with a 2.5% price increase. While a rapid growth is realized by increasing the momentum of the DeFi sector, we see that this reflects on the largest DeFi coin, LINK, with a longer term and lower flexibility on the LINK side. This brings about a steady increase. On chain data shows that the amount of LINK transferred from exchanges to wallets has increased, thus keeping the interest for long-term investments. On the other hand, with February, we see that accounts with LINK assets increase their LINK balances. This indicates that it is restoring confidence.

When the LINK / USD parity is analyzed technically, it is seen that the pricing is realized at the level of $ 33.00 in the channel middle band. The double peak on the 4-hour chart could not break the $ 30.50 region downwards and did not confirm the double peak target. The pulldown from $ 30.50 thus created a 10% increase in the pair. The effect of the channel mid-band level on prices as support or resistance should be monitored. Prices above the $ 30.50 zone may again raise around $ 35.00. The MACD started to move positively above zero, and momentum is in an upward reversal position from the lows. 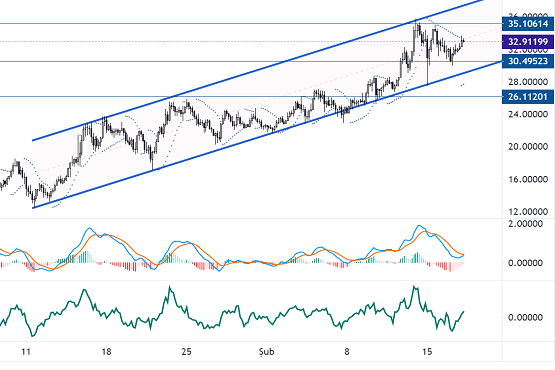 BAT / USD parity is trading at $ 0.5850, up 2% this morning. Expectations for the movement of altcoins were delayed on the Bitcoin side, with the positive pricing of institutional interest. However, on the BAT side, interest was limited for a while, but we see that the demand for Brave, a privacy-oriented browser, is increasing. As such, Basic Attention Token continues to be a successful coin that continues to maintain its upward potential. Technically, the outlook is more horizontal, but this horizontality created a flag formation, creating target pricing in the $ 0.8800 region. If the coins that are experiencing a rapid rise are also promising in the macro part, a one-time retreat and recovery is expected to have a positive reflection on the parity. While the expectations for BAT are positive, technical analysis should also confirm by breaking the $ 0.5900 level, which is the upper band of the descending channel. Otherwise, the $ 0.5100 support level could be followed as the new reaction zone for the continued weak course. 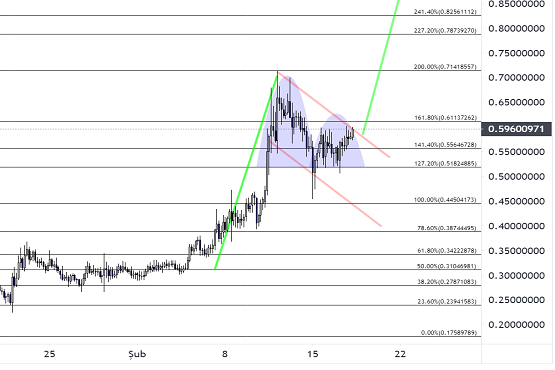