Google Trends shows that the number of Google searches for Ethereum is currently at an all-time high. This increase in interest and interest in Ethereum signals to be pioneering data for the bull run.

The options market signals that Ethereum and other altcoins priced at lower levels than Bitcoin will close the yield gap between Bitcoin and Bitcoin. According to the data obtained from Skew, the decrease in the correlation between them and the increase in the difference between them creates the expectation that alternative crypto currencies will show larger percentage movements than Bitcoin in the near term.

Ripple CEO Speaks About the XRP Case
The CEO of Ripple gave evasive answers in his questions, not explicitly denying that he gave money to exchanges to list XRP. He stated that it is natural to take such temporary measures for exchanges that do not list XRP. In discussions with Tetragon, which owns 1.5% of Ripple, he argued that the company was trying to gain an unfair advantage.

Blockchaincom, one of the exchanges that will discontinue listing XRP after the lawsuit between Ripple and SEC, announced that a change of decision was made in the Tweet it sent one day after this decision and that XRP transactions will continue.

Grayscale mutual fund stated in a Tweet published on January 6 that the total cryptocurrency assets are $ 25.2 billion. Grayscale, with total assets of $ 23.3 billion on January 5, purchased $ 1.9 billion in one day.

Following the exchanges that dropped XRP from the list, Uphold cryptocurrency exchange stated in a statement that XRP cannot be accepted as a security until the lawsuit between SEC and Ripple is concluded and therefore it will not close XRP transactions.

More than 35,000 participants signed the petition launched online after the SEC's lawsuit against Ripple. When 65 thousand more signatures are collected and 100 thousand are reached, the petition will be announced to the US Government and a response will be expected from the White House.

Bitcoin broke a record yesterday evening, seeing $ 40,000 for the first time in its history. The record news that we've gotten used to hearing in recent weeks has been constantly coming from Bitcoin. However, there was a rapid retreat to $ 37,500 after testing $ 40,000 with instant action. Overall, the market is slightly sellers this morning, while Bitcoin is trading 2.5% below $ 38,300. Bitcoin futures funding rates show that there is too much bloat on the long (buy) side. In such cases, the risk of sudden downward reaction of the market called long squeeze increases. Bitcoin dominance has also risen above 70%. However, it is worth noting that the dominance in its connection with Ethereum is very high and that these regions are at high levels and it is useful to examine the subject in the ETH section.

When we consider the BTC / USD parity technically; The upper band of the bullish channel formed in the hourly and four-hour view is in the $ 40,000 zone. After testing this point, pullbacks still remain as an intra-channel correction, while the correction may remain limited in this region unless the sub-channel support range of $ 36,800-37,000 is broken. It is worth noting that the middle band crosses the $ 39,000 level and this point is the daily intermediate resistance. The outlook is somewhat weak, but movements continue in the rising channel. 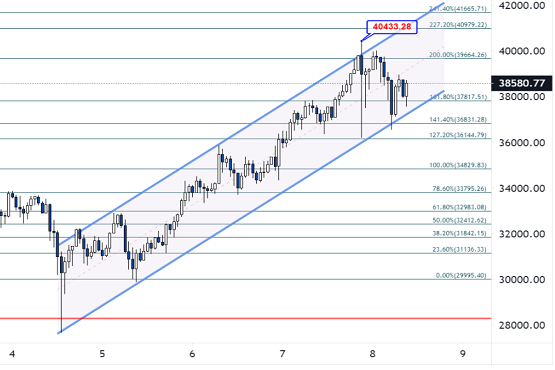 Ethereum is trading at $ 1170 this morning, coming 4% behind yesterday's pricing. The ETH-BTC clipper again returned from the November summit. At the same time, having BTC dominance in the 70% region could lead to highs in this market density and volume. Again, the movements in DeFi tokens may increase the demand on the basis of ETH, and the ETH-BTC clipper shows that Ethereum remains cheap. For this reason, although Ethereum prices are withdrawn in the short term due to Bitcoin, it signals that ETH will begin to move if it gets rid of its relationship with Bitcoin and the Ethereum network fees decline.

When we consider ETH / USD technically; Movements in the bullish channel continue with the testing of $ 1060 and the return from here. Although the outlook is a weak daily move, staying above $ 1060 made this point a good support and the image within the channel continued. In order for the purchases to accelerate during the day, it will be necessary to break the $ 1170 level. We know that this region is the old peak of ETH / USD and the midpoint of the channel. If there is no break, this point will remain open to turns as it will remain as resistance. These points should be considered for buying positions. 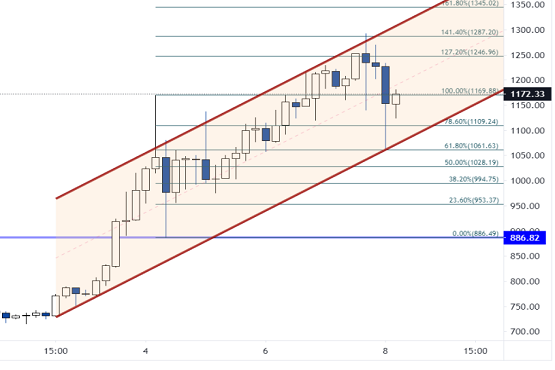 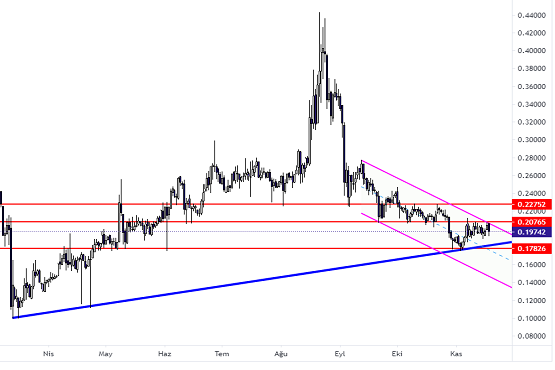 The XRP / USD pair is priced around $ 0.30 in the morning. Although it fell by 7.6% on a daily basis, it turned to the positive side in weekly returns and gained 25%. After the SEC case and the enlistment news, XRP, which has suffered its investors due to the news of the following, has shown recovery movements with the good developments in recent days. After the Tetragon Financial Group claimed Ripple, Ripple's CEO said in a statement that this was only a move that tried to take advantage of the plight of the company but would not be valid. At the same time, the CEO, who made a statement for the exchanges that did not list XRP, said that being unlisted and suspending / stopping transactions are different things, and argued that it is precautionary and very natural for exchanges to temporarily close their XRP transactions. On the other hand, blockchaincom, another exchange that suspended XRP transactions, announced that the transactions will continue in a statement the next day. As the market digests the worst scenarios experienced by XRP, the recovery we have witnessed is met as the natural reaction of the market. Nevertheless, it should be kept in mind that investors who do not want to make a large amount of transactions in their XRP investments and sell losses may also make profit in these movements.

When we examine the XRP / USD pair technically, after testing the 0.24 band, it finally broke upwards and reached the next resistance, the 0.35 level, which corresponds to the Fibo'61.80 correction, but the level was working as a strong resistance and the price returned to $ 0.30. We can say that it was traded around. If the downtrend continues in the pair, the support level of $ 0.27 may come into question. The pair, whose major trend continues to be in the direction of the decreasing trend, will be followed by a weak motion. 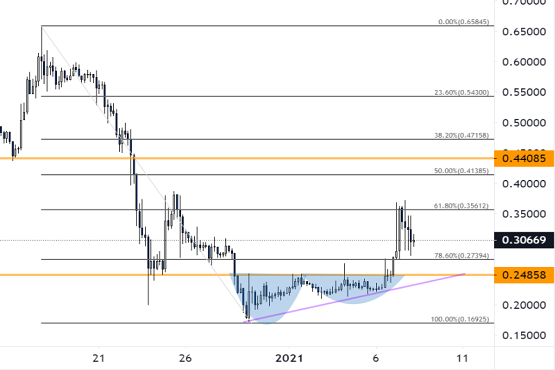 The LTC / USD pair retreats by 5.75% in the morning hours, pricing in the $ 160 band. These sales, led by Bitcoin, came in Asian time. Still, sales in LTC appear to be limited in the $ 160 region, while BTC is trying to recover above $ 38,000. While it is a strong and high potential crypto currency with future promises, the request for privacy-oriented revisions in the MimbleWimble update, which will come to Litecoin in 2021, is conveyed to Litceoin.

The pair, which continues its upward movement at the channel borders of $ 143 - $ 176, continues with the price movements within the bullish channel, although there are withdrawals. At the same time, the Fibo'38.20 retracement of $ 176 worked as a resistance to the price increase, causing the price to retreat, showing the doji on the daily chart. As long as the $ 145 remains above the critical level, expectations are positive for the price, which maintains its upward potential. 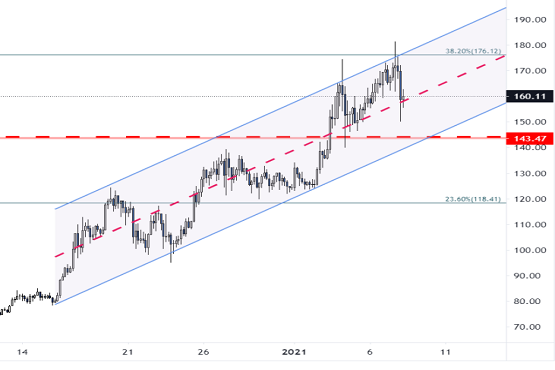 LINK is trading around $ 15.5 with a 3% retracement this morning. Even though LINK fell behind $ 15.00 after the fluctuation after Bitcoin saw $ 40,000 yesterday evening, today it has gone to recover its losses a little more. The ETH-LINK scissors are opened to 30 points. In this case, LINK remained discounted compared to ETH. Even if the scissors go to close, meeting at 20 points points to $ 18.00 for LINK. Although speculation about whether a lawsuit will be filed for LINK after Ripple developments causes LINK to remain in the background, there is no such development for now, but there is no explanation from Chainlink.

Technically, the declining trend that has been going on since August has broken down the previous day, but due to yesterday's sagging falling behind $ 15.00, it also renewed their concerns. However, after the rapid recovery, it was rebuilt as a support, exceeding $ 15.00. Our current band is within the two Fibo correction range of 50% -61.8%. While the 50% correction level coincides with $ 15.00, this point is ok or the continuation point. Therefore, our new waveband is in the range of $ 15.00-17.30. 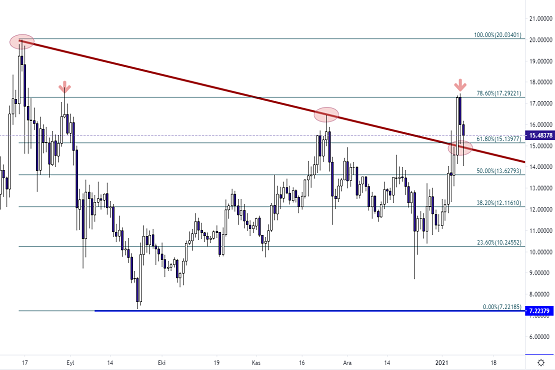 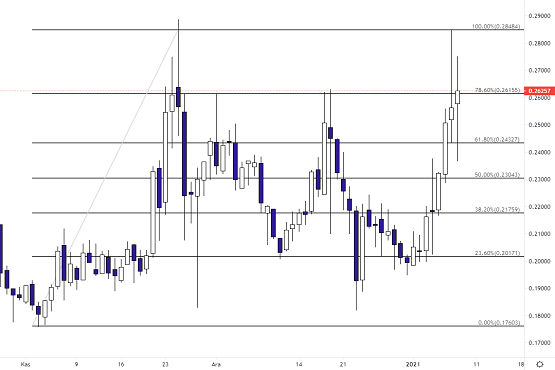