Government Support to Use of Cryptocurrencies in Venezuela

Venezuela, the country that uses Bitcoin the most in Latin America, announced that it started BTC mining by establishing a production facility in addition to making payments with cryptocurrency in many places. Petro, Venezuela's own digital currency, is still not available globally due to US sanctions, but can be used as a form of payment in many shopping channels in the country. State leaders maintained their confidence and encouragement in the use of digital currency, stating that this will play a major role in the development of the country.

Ripple was asked for $ 1.3 billion in a lawsuit filed for violating federal securities laws, following accusations by the SEC that Ripple was unlicensed fundraising "through a digital asset called" XRP ". Looking at the claim, it is seen that Ripple was bribed by Ripple to list XRP on the exchanges and many other legal violations.

Bitcoin Supply Could Be Less than 21 Million

Bitcoin has a limited supply of 21 million in total. The current circulating supply is about 18 million. Cryptocurrency analytics company Glassnode showed in the statistics it shared that two million Bitcoins could be lost. According to the research, 98% of two million Bitcoins, corresponding to 9.5% of the total supply, were mined more than 7 years ago and 94% more than 10 years ago. The fact that bitcoins are forgotten or lost in certain places for not being traded can reduce the supply of 21 million Bitcoin, making it more difficult to obtain.

MoneyGram, the world's second largest money transfer provider, received $ 52 million from Ripple this year to provide Ripple's own liquidity support. In the complaint, the SEC seems to have mentioned MoneyGram when it claimed that "participation in ODL was" subsidized by Ripple. "MoneyGram was not identified as the name in the SEC complaint, but stated that Ripple paid the anonymous money changer $ 52 million by September 2020. .

In a table showing the Bitcoin supply published by Glassnode CTO, the most striking was the sharp decline in the number of Bitcoins that have existed for about 1 year. CTO and others see this as a sign that Bitcoin is in the midst of a supply and liquidity crisis, which makes long-term high pricing predictable in conjunction with Bitcoin demand.

TESLA is More Volatile than Bitcoin

Tesla, America's most valuable automaker, is more volatile than Bitcoin. It was determined that TSLA, one of the best performing shares of the year, was "less volatile" than Bitcoin. While TSLA has become the favorite of Wall Street, it did not go unnoticed that Bitcoin yielded 200% in the same period and 400% return since its lowest level in the year.

Ripple was asked for $ 1.3 billion in a lawsuit filed for violating federal securities laws, following accusations by the SEC that Ripple was unlicensed fundraising "through a digital asset called" XRP ". Looking at the claim, it is seen that Ripple was bribed by Ripple to list XRP on the stock market, and many other legal violations.

Bitcoin is pricing slightly above the $ 23,000 level against the dollar this morning. However, Bitcoin dominance also remains high at the 68% limit. For this reason, this position of Bitcoin, which is suppressing the market, signals that the altcoin season has not started yet and may not be in the short term. Glassnode CTO said that there is a serious supply and liquidity crisis for Bitcoin and this is not pricing, and he underlined the last remaining 12% BTC supply that we constantly mentioned to you. The Bitcoin headline of 2021 could be a likely diminishing supply.

When we consider BTC / USD technically; After testing the $ 24,000 level, there is a risk of making an OBO. For if the $ 22,500 level breaks down, the OBO could start and pressure could increase towards the $ 20,800 levels. Nevertheless, we do not think that possible pullbacks will create fear of decline as the trend and outlook are positive. Bitcoin volatility above 60% is trading on a wider band. It is therefore useful to review narrowband targets. 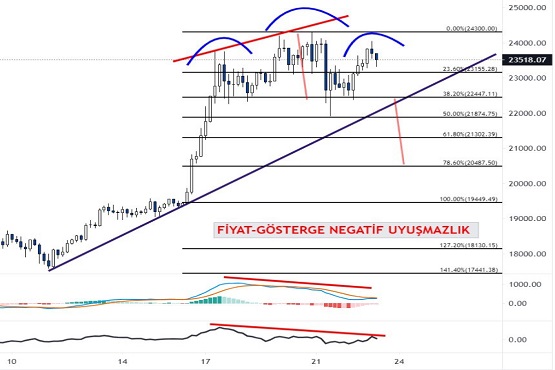 Ethereum is priced above $ 615 this morning, although it has a weaker outlook than Bitcoin. Despite the rise and dominance of Bitcoin, Ethereum remains in the background in terms of performance, but it should not be overlooked its rise and reactions to its withdrawals. Although the ETH / BTC clipper is approaching the support points, it has not reached the bottom yet. The scissors continue to open towards BTC. There may be rapid momentary exits when possible Ethereum responses and a request to close the yield clipper begin. One of the Ethereum developers said that instead of the award given to miners, Ethereum should be burned in the Proof of Work mechanism. The occurrence of such a reverse supply supports prices.

When we consider ETH / USD technically; We see that it follows a more positive course compared to Bitcoin. In ETH / USD, which is still on the uptrend, yesterday this trend was tested at $ 585 and we saw the immediate response form towards the $ 6470 levels. The red area we mentioned in the chart is in the range of $ 609-595 and this area may be the place where the sales pressure may stop and a further reaction can be expected in the withdrawals. The $ 595 and $ 585 levels are our major support points. 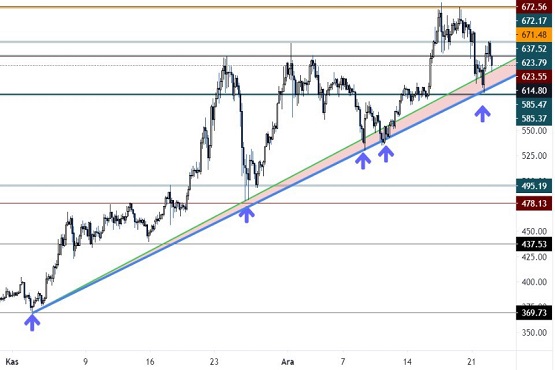 AVAX / USD is losing 4.20% as of today. Unable to take advantage of the recent positive movements of Bitcoin, AVAX / USD continues its negative divergence and maintains its downward trend. As the downward trend of the pair, which shows an increasingly weak image, the selling pressure increases. The course of the pair, which experienced a recovery from the critical price level of $ 2.80, which was previously on the agenda, should be followed as the outlook is still weak. 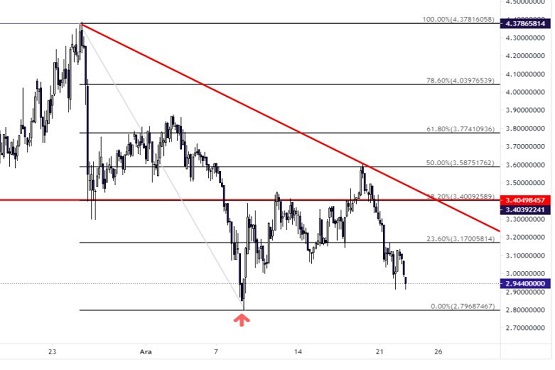 XRP had lost 10% yesterday on the news that the SEC would sue. This morning, the details of the case to be filed by the SEC have been revealed, and this morning we see that it is 20% behind, expanding its losses. The SEC announced that Ripple has filed a lawsuit claiming that it sold $ 1.3 billion of unregistered securities. The complaint released by the SEC states that Ripple has been collecting funds "through the digital asset known as XRP" since 2013. We are currently fully pricing the case. In the future, depending on the course of the case and a possible agreement situation, the news that the XRP will be made out of the list and their agreements may be broken may be priced. "We'll wait and see," said Moneygram, which uses Ripple. For this reason, the situation and negative expectations in pricing are not over. We recommend that you check out our blog on Ripple company's impact on XRP price.

When we consider XRP / USD technically, hard losses continue. The rise in November started from the $ 0.22 zone and the March lows were in the $ 0.11 zone. For this reason, it is useful to take a look at the past pricing on how much further it can drop. The technical and basic outlook is poor. On the hourly chart, we see that the responses are very poor. 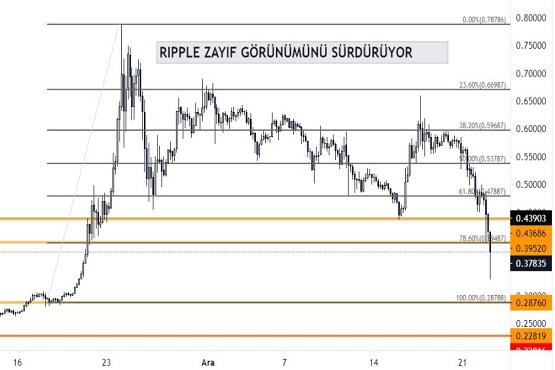 Litecoin is experiencing a movement with 3% sellers this morning, with 2 points more negative divergence than BTC. Litecoin is 13% higher than Bitcoin in weekly returns. For this reason, it is necessary to read the table that Litecoin still has a return on BTC, not a negative decomposition. Having a monthly volatility of 113.5% provides a daily movement area corresponding to 4% and provides transactions in this direction in LTC / USD.

When we consider LTC / USD technically, OBO continues to work with a similar view to BTC / USD. However, in order to identify the OBO pattern in the pair, we need to break the $ 100 level downside. Therefore, it may be early to open an OBO position for now without seeing a break. In the event of a possible OBO occurrence, the range of $ 84-88 is where the pattern indicates. Nevertheless, considering that the uptrend is in the $ 92 zone, breaking the $ 100 could bring the $ 90 limit on the agenda anyway. 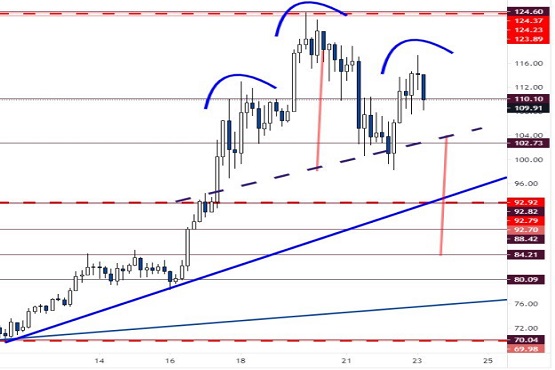 When we examine the LINK / USD parity technically, it continues to retreat by 3.75%. Although the downtrend that has been ongoing since August is preserved, after completing the descending triangle formation it has created, the support it will receive from the channel sub-band at the level of $ 12.20 may support Chainlink's upward potential. If it holds on to the $ 12.00 channel levels, we can witness a possible movement in pricing of $ 14.00. It does not show a positive recovery for now. 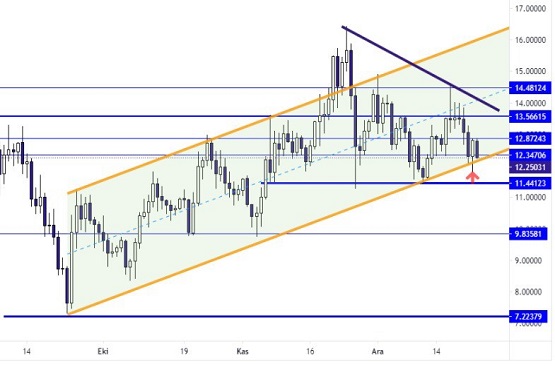 BAT / USD is pricing around $ 0.2100, with a 3% retracement in the morning hours. It broke down the $ 0.2216 level where the 23.60% Fibo retracement passed, demonstrating the continuity of the bearish trend. Although its short-term outlook is in a downtrend position, an increase to 0.2500 levels may be on the agenda with the possible strength it can get from 0.2000 major support. However, as a result of the positive Bitcoin - BAT correlation, the picture may be weak in the short term unless we see upward movements by Bitcoin. 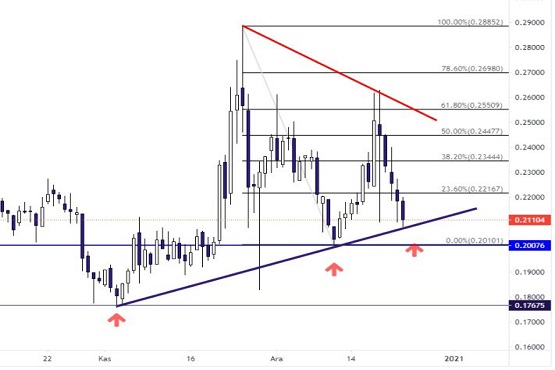