Grayscale applied yesterday to establish DOT, AAVE, ATOM, XMR and ADA funding. The application was filed by the Delaware Trust Company, Grayscale's legal representative in the state. Stating that the said development does not necessarily mean that a fund will be established for these money, the company has announced that they make such reservations from time to time.

Microstrategy CEO: Bitcoin Could Go Up 1000 Times And No One Can Stop It

Michael Saylor, CEO of the public business intelligence giant Microstrategy, said in an interview that Bitcoin will rise by 100 or 1000 times if enough people adopt it. Adding that the current withdrawals and volatility are of no importance, Saylor emphasized that no one can afford to stop this movement when the day comes.

Digital asset management firm Grayscale has added 890 Bitcoin and 9,000 Litecoin to its fund in the last 24 hours. The company, which increased the total number of Bitcoin assets to 41 thousand in January, is expanding its crypto money assets without slowing down.

Mark Cuban, owner of the Dallas Mavericks, one of the world's most famous entrepreneurs and one of the NBA teams, is a DeFi investor. The billionaire, who has a fortune of over $ 4 billion, recently stated that he is interested in cryptocurrencies and has more investments than in the past.

DOGE Broke Records in Both Stock Exchanges and Social Media

The meme-based cryptocurrency was the first to be mentioned more than Bitcoin, with a record tweet volume in the past 24 hours. Dogecoin, which has experienced a tremendous rise with the shift of the Reddit group responsible for increasing GameStop's share price to cryptocurrencies, will be engraved in mind as one of the biggest manipulations in history. DOGE increased by more than 1000% in 24 hours.

Bitcoin is pricing at $ 32,600 this morning, just behind $ 33,000. We have been seeing weak movements in Bitcoin in recent days, when the developments for Wall Street shares in the Reddit forum were reflected in crypto currencies, the popularity increased and there was activity in the crypto community yesterday. However, Bitcoin's on-chain data does not support a record-breaking rise. While Bitcoins withdrawn from the stock markets for the last week have kept them above 30 thousand dollars, there is no significant change in the number of new and active addresses. Nevertheless, the fact that BTC is being mentioned more frequently in forums should be followed with importance to the extent that it can create a new buyer base.

When we consider BTC / USD technically, we see that the transactions are horizontal in the range of $ 30,300 and $ 33,900, broadband, and narrowband between $ 31,800 and $ 33,200. Although we are still in a downward trend for the last month and there are no fundamentally triggering developments, the resistances make a return, but the recovery of the bottom bottoms also offers the opportunity to position. The look has a structure that pulls from support levels. Unless the $ 30,300 level breaks down, we can see a continuation of the retracement move up. 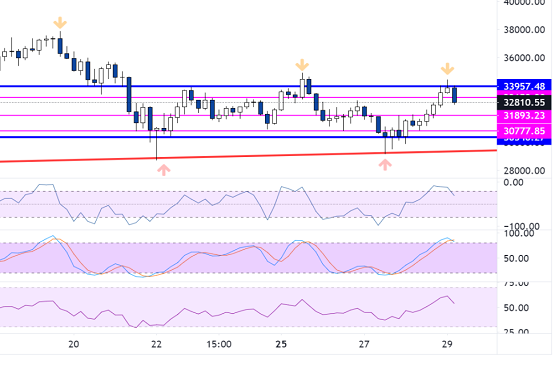 Ethereum is priced at $ 1300 this morning. On the Reddit forum, DeFi developers published an open letter discussing the Ethereum consensus. In this letter, it is argued that the Ethereum network is open 24/7 after Robin Hood closed the transactions, while there has been a noticeable increase in the number of active and new addresses in on-chain data in the last 24 hours. This situation may positively differentiate ETH, especially DeFilar.

When we consider ETH / USD technically, the correction movement in the parity, which is in an upward trend in general view, was limited to 18%, not 30% this time. On the recovery outlook, short term support is at $ 1295 and the Fibo'50 retracement level is at $ 1260. For some time now, we've been seeing intense trading on ETH, including $ 1375-1260. Although we watched a slight sales trend in the morning, ETH is positive in general view. 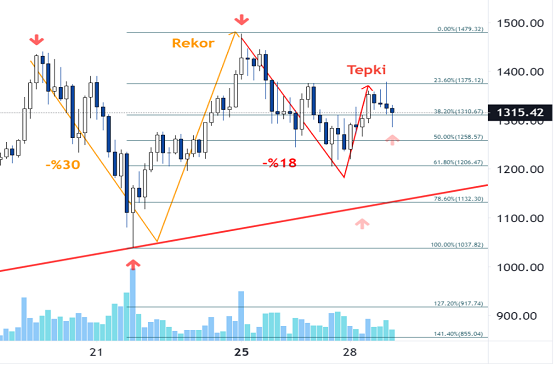 The AVAX / USD pair retraced 2.5% this morning, pricing at $ 11.70. Tested several times during the day, the $ 12.40 level worked as resistance in the upper band of the bearish channel and pricing was below this level. While it is currently on a horizontal run, it is 20% away from the AVAX record, which indicates that it has the potential to regain those levels that it had previously tested. If $ 12.40 is exceeded, his next target will be $ 13.50, which is the upper level of the horizontal band. 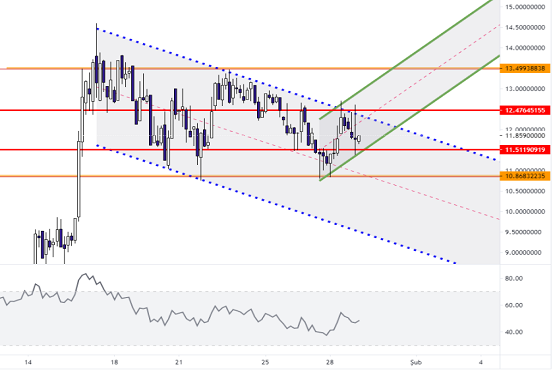 Ripple is pricing at $ 0.2920 this morning, up close to 10% against the dollar. While the lawsuit with the SEC has occupied the market for some time, the bad accusations it has experienced with manipulations are now being diverted elsewhere. It is not overlooked that the SEC's control capability, which actually extends to the stock market, is cramming somewhere.

If we examine the XRP / USD pair technically, it is seen that the price that tested the $ 0.3120 level was priced at $ 0.2920 with a small retracement. The lows that accompany the rise and recover on the daily chart do not go unnoticed. At the same time, the double bottom pattern he created points to the $ 0.5000 level, but the $ 0.3120 confirmation zone needs to be broken upwards. The outlook is positive, albeit slowly. 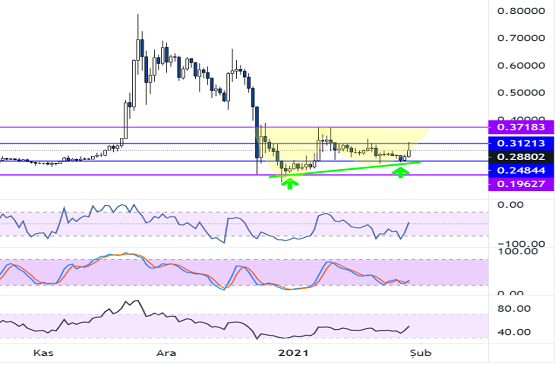 Litecoin is priced at $ 133.00 this morning, up 1%. Grayscale bought 9,000 Litecoins the previous day and added more than 37,000 Litecoins to the Grayscale Litecoin Trust fund in the last week. Although these changes are an indication of corporate demand, especially Grayscale, we have not yet seen the reflection of this on prices for Litecoin. Looking at the monthly yields, it increased very slowly this month and remained at a 3% return rate. Despite some decline in correlation levels with Bitcoin, it is still the most correlated crypto currency among the ten largest cryptocurrencies in terms of market value. 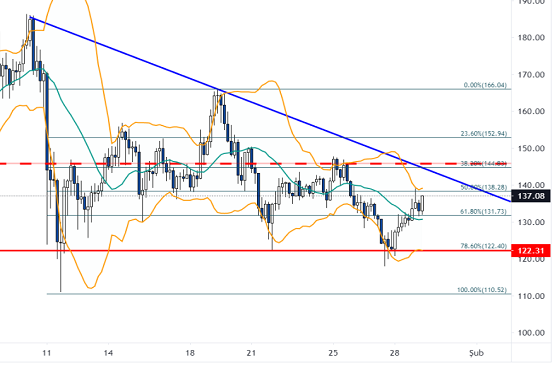 The LINK / USD pair is down 1% on a daily basis and is currently priced around $ 22.80. Chainlink, an Ethereum and DeFi token, closes the yield spread between ETH and ETH on a weekly basis with a 5% return on the last business day of the week. Its monthly return reached 100% with its pricing doubling exactly compared to last month. The gradual weakening of Bitcoin dominance (62.6%) and the expected slow pace in Bitcoin put DeFi currencies to the fore. So the potential is preserved for LINK, the largest DeFi token and seventh cryptocurrency in the market size ranking.

Although the LINK / USD parity remains in the lower zone of the channel in the technical view, the outlook is positive and in the bullish channel. In the chart, which uses the channel levels and Fibonacci lines quite successfully, the price candles that pullback from the $ 24.00 channel mid-band are moving towards the $ 20.50 channel lower band. But the $ 22.30 and $ 22.50 support levels are just below the price. For the price remaining in the upper zone of the Bollinger band, the indicators leave the bearish position and give signals supporting the beginning of the uptrend. 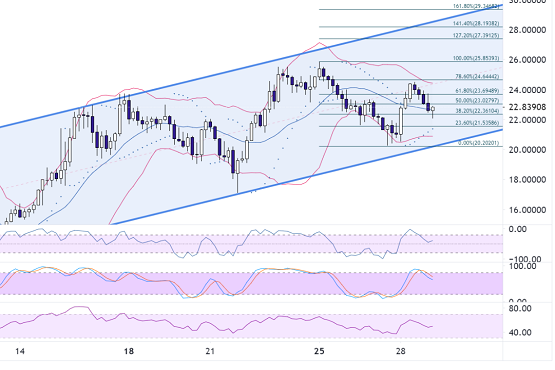 The BAT / USD pair is down 2% compared to the previous day and is priced at $ 0.2990. It continues its course in the rising channel shown with black lines. As long as staying above the $ 0.2786 level, which coincides with the Fibo'38.2 correction and is also the neckline, $ 0.3096 and then the upper channel of $ 0.3250 may come into question. Although the created double bottom pattern signals the level of $ 0.3822, we expect it to be supported by macro indicators. When we examine the graph, we see that where there is an increase in volume, this situation is reflected positively on the parity and strong accelerations are caught. And this could bring new increases for the high-potential Basic Attention Token. The outlook is positive. 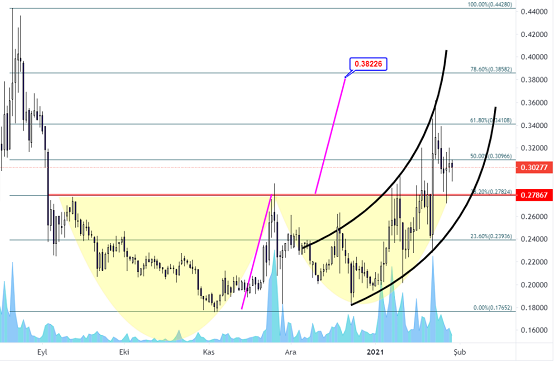