Having $38.8 billion worth of crypto assets under its management, Grayscale has stated in its current application to the SEC that it plans to convert its GBTC fund into ETFs. Expressing its commitment about the EFT, Grayscale has also stated that it is at the last stage of the converting process of Bitcoin and Ethereum Trust funds to EFT.

MicroStrategy, the company with the most Bitcoin assets in the world, bought another $15 million BTC at an average of $59,339 the previous day. The total BTC assets of business intelligence company MicroStrategy thus reached $91,579.

According to the current report of Ark Investment, the market valuation of Bitcoin will surpass that of gold with over $10 trillion market value in the future. This means that Bitcoin will increase 10 times in the coming years.

According to data collected by The Block, the spot trading volume of cryptocurrency exchanges reached $1.17 trillion in March. Thus, a volume of over $1 trillion was achieved for two consecutive months.

Bitcoin Awaits a Wave of Institutional Interest
According to Oanda’s senior market analyst Moya, BTC is waiting for the next institutional wave to rise. Moya has stated that BTC is in a healthy consolidation period and BTC's next target is $75,000.

Garlinghouse Comments on Bitcoin
Ripple CEO Garlinghouse said in a recent Bloomberg interview that Bitcoin is the most inefficient payment option ever created, and the energy consumed during the mining phase is very harmful to the atmosphere.

Bitcoin is trading at $58,800 this morning without breaking its sideways course. There has been silence in BTC due to the altcoin season for a while, but the data indicate that BTC will move to close this discount. The BTC-ETH scissors reached 15 points. BTC premiums started to increase. Grayscale premium began to recover and approached the zero line. This may cause Grayscale to reopen the GBTC fund after a while. We have been writing the BTC accumulated in wallets for days; In addition, the South Korean premium went very ahead and drew the direction of BTC. If we take into account the expectations of MicroStrategy to trigger the lacking institutional demand, BTC can be expected to move.

When the BTC/USD parity is technically analyzed, Bollinger has started to get stuck in BTC, which is at the support levels of the bullish channel, which is an important technical sign that a breakout may occur. The middle band of the ascending channel where it exists is 15% above the current level, and if the gap mentioned above is closed, there will be a movement to the middle band. Therefore, we can state that we are at the support point in the movements of BTC and our opinion is positive, and we expect BTC to make the missing premium correction. The course is horizontal, the view is positive. 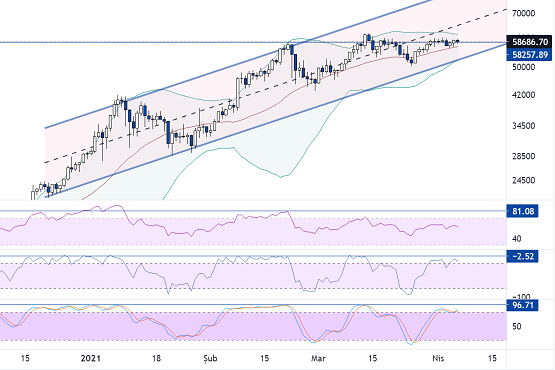 Ethereum has become more familiar with $2,100 levels, with a 16% rise in the past week. The Berlin hardfork is expected on April 14th. This hardfork, which will be the midpoint of the Serenity leg in the ETH 2.0 transition, is expected to solve the scale and density problems. Ethereum's news expectation in this sense is also reflected in the $2,100 zone in terms of price.

When the ETH/USD parity is technically analyzed, the record of $2,145 could not be exceeded, and a negative dispute started in the relationship between the MACD and the momentum indicators with the price. For this reason, this profit can be expected to come to an end with some support movement, and it may go to rest for a period of time. Especially if the expected technical upward correction of BTC comes, the $2,080 levels, which corresponds to the Fibo'61.8 correction zone, can be tested in the movements. 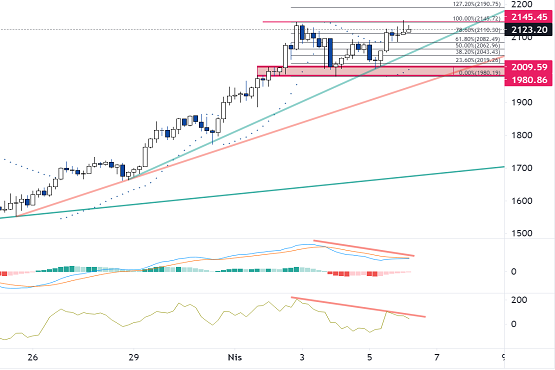 AVAX is seeing a daily increase of 7.2% this morning and pricing is in the $33.50 zone. After the unlocking took place on March 9, AVAX increased its market value, and its successful projects enabled savings-oriented strategies to be established instead of creating sales pressures on AVAX owners. We can say that the disposed AVAXs were also brought into circulation in the one month term we left behind, thus easing the pricing. After the Apricot update, it is read that the demand has increased.

When the AVAX/USD parity is technically analyzed, the upward break of the $28.70 downtrend will move up, but the pair has returned to the same level and sought support from there. After sustaining above $28.00, we confirmed that the downtrend was broken and the uptrend gained momentum after this move. Leaving the $32.40 Fibo'38.20 slice behind with a voluminous breakout, which is one of the important resistances for the pair, is read positive for the chart. Candlesticks above $32.40 will make this level the current support zone. The next resistance is at $36.50. 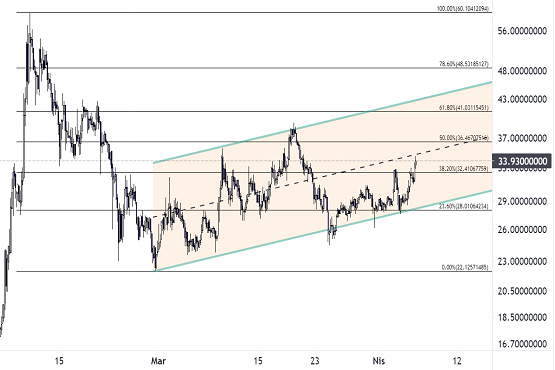 XRP set a record for the past three years, testing $1.00 on some exchanges the day before, and thus earned higher returns than most altcoins that were already looking positive. At the preliminary hearing, which will take place today at 9:00 pm, the parties will present their documentation regarding whether the XRP is a security or not, to the judge Torres. Developments such as the statements of Ripple CEOs and the participation of investors in the XRP case continue to create a positive perception of the litigation in the market. Thus, investors are purchasing large amounts of XRP in order not to be in the background of a possible optimism wave. Since the case will be held as a conference, developments regarding the course of the event may cause sharp pricing on the US side in the evening.

The XRP/USD pair is retreating 5% this morning, pricing in the $0.86 zone. Although oscillators are pointing to overbought zones in the short term, considering the weekly chart, there is no excessive pricing for XRP yet, especially on the RSI side, but a one-time consolidation of the chart, which is rapidly rising, catching prices around $1.00. Support and resistance zones indicate a possible slowdown in the pair between $0.78 and $0.97. The pair has achieved accelerated pricing of the current triangular outlook. As long as there is no candle closing below $0.63, the positive outlook can continue for prices holding on to the uptrend. 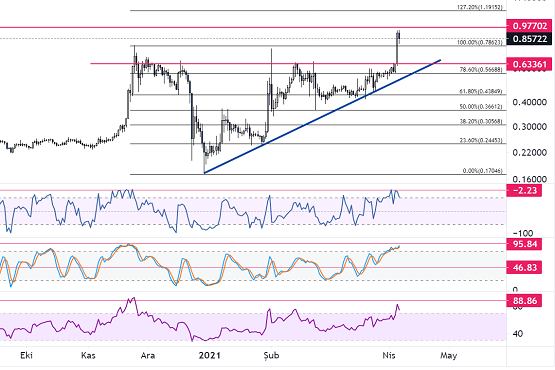 Litecoin is up 1% this morning, pricing around $223. Litecoin, which has the highest correlation with Bitcoin, may be waiting for Bitcoin's next price steps. On chain analysis points to positive developments in wallet addresses. The decrease in the dominance of Bitcoin and the possible increases triggered by an institutional demand can make Litecoin stand out in the race of return.

When the LTC/USD parity is technically analyzed, when the chart is looked one step behind, the flag formation formed in the weekly period draws attention. Although the flag formation, pointing to the $380 zone, sets a target for the medium-to-long term, LTC is still far from its record, which increases its potential. On the other hand, the pair broke the $212 zone upwards, leaving the downtrend behind. The first resistance zone is $230 and the next resistance for the pair that makes this zone support is $246. 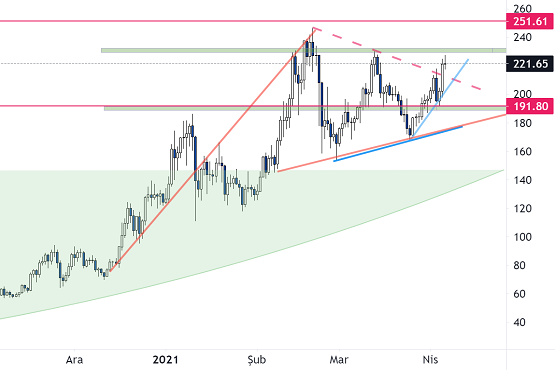 Chainlink is in the $31.75 price zone with a 1.8% retracement this morning. Although Chainlink has lagged behind in the race for revenue in the general market, it will also take a share from the positive movements of Litecoin and Bitcoin. For this reason, it is important to consider LINK as a very important value investment, as well as its return success of the last year.

If the LINK/USD parity is taken into consideration technically, the OBO (Shoulder Head and Shoulder formation) did not give a confirmation as there were no closings below $29.42. Response purchases from the $29.42 support thus accelerated the chart and brought about a 10% rise. The pair is holding onto the minor uptrend and the indicators are on the uptrend. In the 4-hour period, it shows that the MACD buying appetite is in the recovery phase. 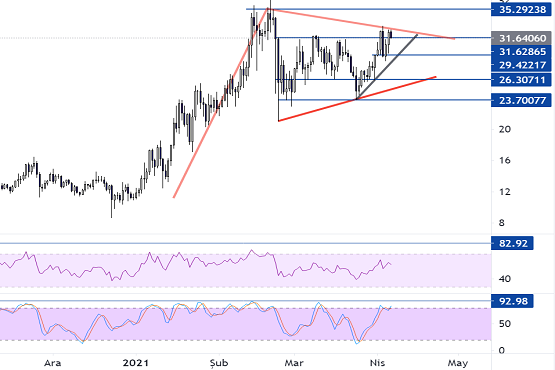 Basic Attention Token retraces 5% this morning to $1.22. The parity, which continues to increase steadily in the upward channel as of March 25, is confirmed by the chain data. Recently, there has been a slight decrease in the amount of BAT in stock exchanges and an increase in new addresses. Having a record price of $1.41, BAT is yet 15% away from its record. For this reason, it remains at a discount among the potential owner coins. Technically speaking, the pair is just below the mid-channel $1.25 level. Therefore, a break of $1.25 could move the pair to the $1.30 resistance and then the $1.33 upper channel. The course is positive. 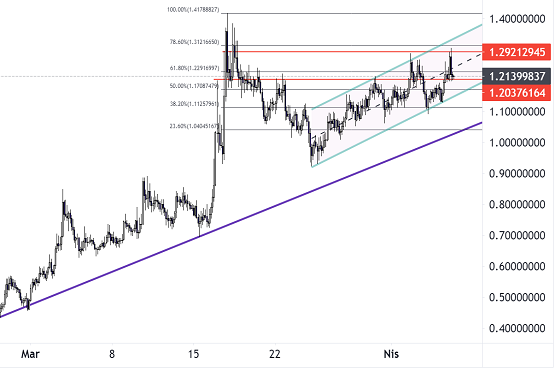