Grayscale, the world's largest digital currency asset manager, added an additional 2,710 Bitcoins to its portfolio, increasing its total BTC assets to 608,810 as of today. It was the first BTC purchase they made as of the new year.

Asset Manager Grayscale recently announced that they are removing XRP from the fund, and this time they are converting all XRP into dollars and distributing it to all shareholders.

The lawyer argued that all documents indicating the amount of dollars reserved in exchange for Tether were ready in the lawsuit filed against the charges against Tether. Stating that the accusations against Tether are far from reality, the lawyer stated that they followed all the necessary procedures.

The first hearing of the case between the SEC and Ripple will take place on February 22. It has been announced that 21 lawyers have been appointed by Ripple to defend the case. Regarding the relevant statement, comments were made that "almost an army" lawyer was hired.

Peter Wall, CEO of Bitcoin mining company Argo Blockchain, announced that cryptocurrency mining companies are at least as interested in crypto coins. The market capitalization of Argo Blockchain increased from £ 25 million to £ 300 million in a month.

The number of people who keep their crypto assets in cold wallets instead of exchanges is quite high. However, many people lose their cryptocurrency assets due to wallets whose password cannot be remembered. One of them, Stefan Thomas of the United States, could not find the password of the Bitcoin wallet with $ 220 million in it, and only 2 left.

According to a survey, the number of consultants allocating capital for cryptocurrency investment has increased by 50% in one year. The consultants themselves are much more willing to invest their personal wealth in cryptocurrency than customers, and 24% said they already did.

Oaktree Capital Founder billionaire Howard Marks stated in 2018 that Bitcoin is a speculative and wrong product for investment. In his last statements, he announced that he has a significant amount of BTC and derivative cryptocurrencies.

Lagarde emphasized that Bitcoin is a speculative asset and that regulation needs to be introduced, while hoping that the digital euro study will not take more than five years.

Iran made a decision in 2019 that the facilities to be produced Bitcoin should be licensed. The number of mining facilities without licensing has increased rapidly, with Bitcoin prices showing record levels in recent days. Thereupon, 1,100 illegal mining facilities were closed in Iran.

We are starting the day with the market value of the crypto money market above 11%. Bitcoin recovered from $ 32,900 levels yesterday, up 20% to $ 38,100. Thus, the distance to the summit fell to 10%. As the only institution that maintains its upward view in the institutional crypto money market, we see that institutional investors have entered the level of $ 30 thousand. The decline of Bitcoin was not due to panic sales, but because of the excessive inflation of the leveraged market and the closing of the purchases we call long squeeze, and the resulting liquidity of $ 2.14 billion. In addition, Grayscale added Bitcoin for the first time since December 24. Paypal broke the cryptocurrency volume record. Bitcoin has been moved to cold wallets to be stored in large quantities from stock exchanges in traffic since last night. All of these basically support Bitcoin.

When we consider BTC / USD technically; According to tier analysis, purchases at $ 30,200 confirmed the bottom and the second bottom was at $ 32,300. While the Fibo'50 tranche 'go ahead' level will be $ 36,000, as long as we do not drop behind here, the double bottom formation will continue and maintain its potential towards the $ 41,600 levels it indicates. The outlook is positive and positive. 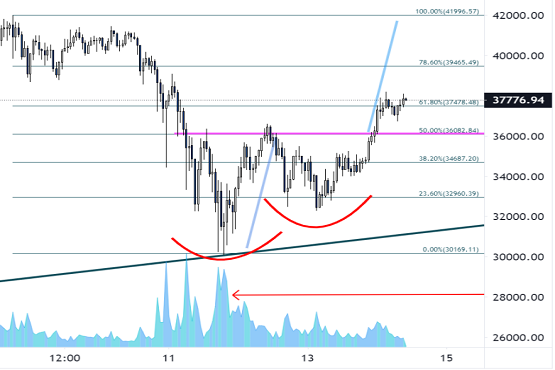 Ethereum rose nearly 18% from the $ 980 level it tested yesterday to a high of $ 1150 this morning. The market remains dependent on BTC rather than preparations on the DeFi side. Therefore, ETH and BTC still cannot act independently. However, while the number of new addresses in Ethereum increased by 10% in the last 24 hours, the mining fee (gas fee) that we complained about for a while preventing its rise has decreased by 22%. Therefore, Ethereum has started to be supported from a fundamental point of view. It is necessary to focus on technique.

When we consider the ETH / USD parity technically; It is 20% away from the $ 1390 peak it saw 1096 days ago. The double bottom or recovering lows, which coincide with the Fibo'50 level and can be described as a neckline, are passing through $ 1130. We think that purchases may gain momentum if it breaks the current level, but if not, the $ 1072 and $ 1010 levels are in support. Continuing to move along the bullish channel for now, ETH / USD also crosses the lower band of the channel at $ 1075. Therefore, the $ 1075 level will be the major support, while $ 1130 will be a major resistance to be followed throughout the day. 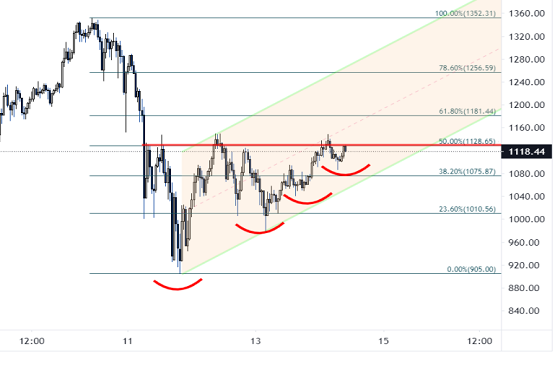 Although there is a 2% decrease in the pricing of AVAX against the dollar, there is an increase of 10% based on these hours the previous day. When looking at the correction movements of AVAX, which was priced around $ 8.30 at the time of writing, the downside corrections are behind the upwards in percentage terms. This means that although it is an upward trend, we see that the price has been constantly pushing up in the last period. Day by day, we see that crypto money investors are getting used to and accepting for the Avalanche developer who conducts project-based research. Technically, if AVAX / USD, which is in the bullish channel, fails to break its current $ 8.40 upwards, there may be a short correction to the $ 8.00 and $ 7.50 levels. 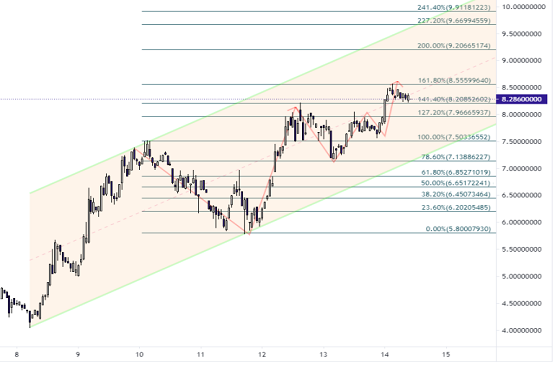 The XRP / USD pair is pricing around $ 0.29, down about 4% in the morning hours. Although it retraced by 8% in the first hours of the day to around $ 0.28, it did not fall sharply and remained above the uptrend. On the XRP side, we see that it is now priced based on the investor's risk appetite rather than news-based price movements. In the Ripple case to be held on February 22, the lawyers of the parties were made public and 21 lawyers were appointed by Ripple, while 3 lawyers were assigned by the SEC. While the creation of a strong defense wing satisfied the investor's trust, the need for a defense strong enough to be assigned 21 lawyers made those concerned. On the other hand, after the UK's announcement that XRP cannot be counted as a security, Japan also defended the justification of XRP with similar statements today. On the XRP side, the bad period that has persisted throughout the case news has begun to leave its place to the digested market

When we examine the XRP / USD pair technically, it continues above the existing minor uptrend. There are technical recoveries in XRP, which is negatively differentiated from other crypto units due to very negative data on the macro side. Although it is in an uptrend, the bullishness in XRFP / USD is weaker than expected for now. As long as it holds above $ 0.2740 in pullbacks, XRP will continue its trend and thus will be open to the upswing. The upper resistance corresponding to the Fibo'61.8 slice. It is $ 0.3570 and has not been passed, although it has been tested twice before. 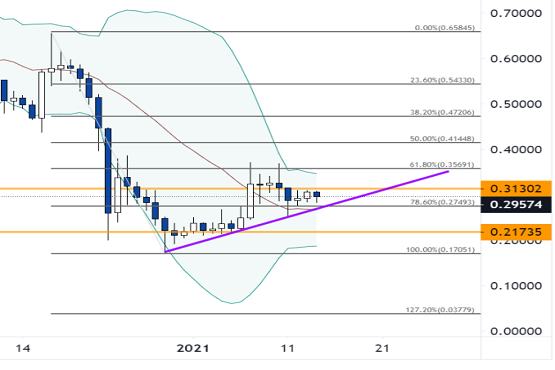 Although the LTC / USD parity is priced around $ 147, changing by a low percentage on a daily basis, it has tested $ 150 during the day, rising by 14% in the 24-hour period. It is clear that its one-day volatility has the potential to exceed these values, even though it still yields negative returns of 12% in the weekly period. It should not be forgotten that LTC's record dated December 12, 2017 is $ 420 and it is now 65% away from this level, in addition to the gradual opening of the revenue spreads of Litecoin and Bitcoin. We do not think that Litecoin will be negatively differentiated while the market value of alternative coins, which has experienced a strong rise as of the new year, is doubling. Although its correlation with Bitcoin falls to the level of 0.93, we know that there is no supporting infrastructure on the macro side and it is due to the opening of the return gap between them. We can mention that Litecoin, which needs to run fast to close this difference, is also subject to a strong investor interest in the institutional market with the demand created by Grayscale. It is worth noting that yesterday, 2071 LTC were received in the Grayscale fund.

If the LTC / USD parity is to be interpreted from a technical point of view, it is seen that the $ 149 band has been tested in the hourly period after the sharp decline on January 11th. If the $ 147 level is exceeded and the confirmation is received, the formation target of around $ 176 may be levels where new pricing is seen. The outlook is positive. 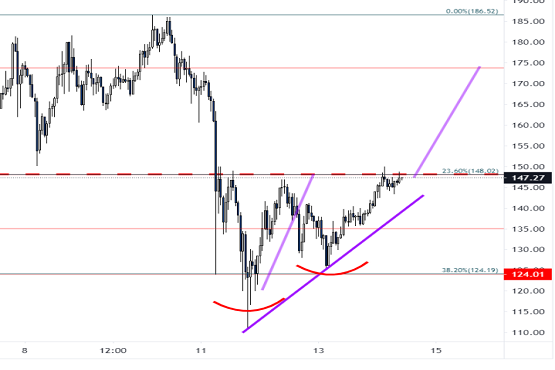 LINK / USD rose to $ 16.5 from $ 13.20 yesterday, outpacing Bitcoin and Ethereum returns yesterday, up about 23.8%. With a correlation of 0.76 with Bitcoin and showing a close relationship, LINK can get a chance to move with the start of the Bitcoin movement we expect. Likewise, on a weekly return basis, LINK lost 2%, ahead of ETH with 9% loss.

When we consider LINK / USD technically; Horizontal movement continues between $ 8.70 and $ 18.40. In the continuation of our movements in the upper-middle region, we are currently in the region of $ 13.70-18.40. During the daily period, oscillators are still not overbought and Stochastik has begun to give signals of reversal. The view is horizontal but positive. 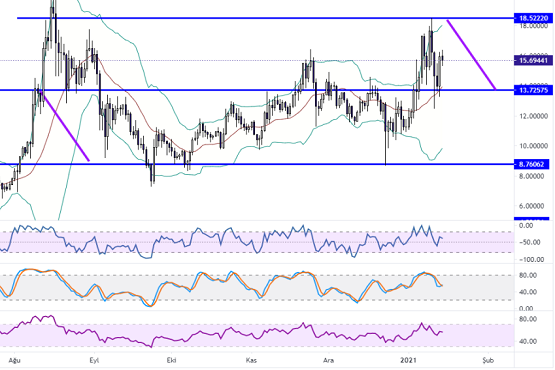 BAT / USD has become one of the fastest emerging altcoins recently. After this debut, it has drawn an upward channel in the technical view. BAT, which is 1.5% behind in today's changes, is in the middle - lower level of the bullish channel. In order for prices to rebound, they must break the $ 0.25 level upward and cross the channel mid-band. Otherwise, you may not be able to avoid high costs in the bullish view. Because if it fails to break the $ 0.25 level upwards, their retracement could reach the $ 0.21 levels. It is worth paying attention. 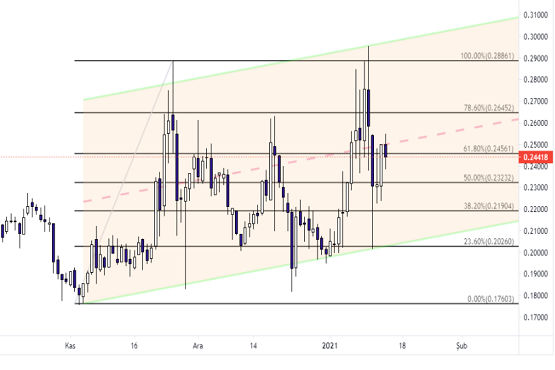