With the announcement that Tesla company has made an investment of $ 1.5 billion in Bitcoin, Bitcoin price has skyrocketed. Tesla also stated they made an application to SEC to  support payments to be made with Bitcoin.

Avalanche and Ethereum Networks are Connected

According to the project called the Avalanche Ethereum Bridge, thanks to the connection established between Avalanche and Ethereum, people will be able to switch between the two ecosystems according to the price and speed of the transactions. When the transaction fees in Ethereum rise, traders will be able to use Avalanche network with reduced fees and when there is not enough liquidity in Avalanche, it will be possible to switch back to Ethereum network for higher liquidity.

Interest In Cryptocurrencies is Quite Different In The USA And Japan

A Japan-based exchange reached more than three thousand companies in the US and Japan, and conducted a survey that measured companies' interest in digital assets. According to the survey results, US citizens think that Bitcoin is more attractive than gold whereas most of the Japanese participants were negative against Bitcoin.

Digital Yuan Begins To Be Used For Payments

According to the report of the South China Morning Post, a Hong Kong-based newspaper, China will distribute 30 million digital yuan as of February 10. Digital yuan will be used in both online and physical stores. Thus, the process of bringing the digital yuan project to the public, which is the biggest part of China's transition to a cashless payment system, is accelerating.

Alo Fatwa Line is Getting Questions About Bitcoin

According to the news of the Anadolu Agency, 155 thousand questions are asked to the "Alo Fatwa" line in 2020. Bitcoin and cryptocurrencies are among the most asked questions of citizens. People are curious about the religious provisions of cryptocurrency usage.

Bitcoin is pricing just above the $ 48,000 level, up 3.5% this morning. The news from Tesla yesterday reawakened prices, and Bitcoin, which has lagged behind its performance in recent weeks according to altcoins, regained dominance. Bitcoin's dominance rose from 60.9% to 64%. Tesla's $ 1.5 billion purchase of BTC makes it second in the Bitcoin holding rankings after  MicroStrategy with a current value of $ 3.4 billion. Although the news that Apple will buy BTC after Tesla is among the market rumors, this is not a real information for now, except for the claim of a foreign reporter. Nevertheless, considering that Tesla's news will trigger many people to buy BTC, it may be necessary to expand and revise targets in BTC.

In BTC / USD, 30-day volatility is 101%, which provides 3.5% daily range of motion. The flag formation in BTC / USD in the daily period also corresponds to the level of $ 58,000. Because we are 22% away from this region and volatility, also this technical view that occurs in the daily period can lead us to the flag goal in a two-week period (Everything goes linear, no news effect!). For this reason, we should not forget the cautious trading strategy with stop loss against the news effect and other kinds of factors. If we follow the last correction as Fibonacci, the $ 47,267 and $ 49,942 levels, which correspond to the 141-161.8% slice, are our daily resistance and trading band. 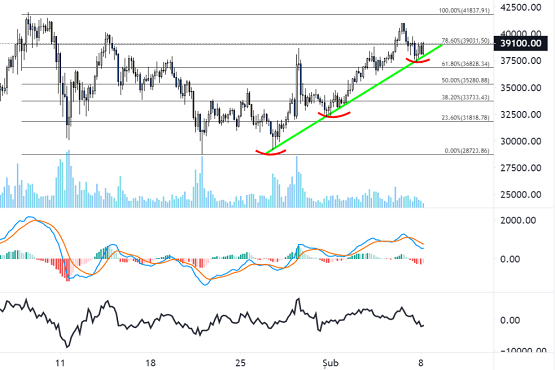 Ethereum is pricing just below its record at $ 1764 this morning. The market value has increased by 8% in the last 24 hours. Looking at the futures transactions, the rapid increase of the funding rates indicates that the rising expectations on ETH in the stock markets continue. The Bitcoin-Tesla news announced yesterday after the market's overall DeFi-oriented growth until Tesla news caused BTC to steal a role from Ethereum. In the 24-hour exchange, Grayscale expanded its portfolio with 3,000 ETH purchases. In addition to Grayscale, ETH futures opened at CME pave the way for institutional investor interest as well as individual investors.

A technical analysis of the ETH / USD pair reveals that the pair has formed a new minor uptrend with higher slopes on the major uptrend. The response over the $ 1580 support level pushed the pair up to $ 1780, setting a new record. The MACD histograms continue to increase positively, but momentum shows some power loss in the last two peaks. Currently rising triangle formation of $ 2080 continues. Attention should be paid to the lower support at $ 1580 and the stop loss should be monitored in trades. 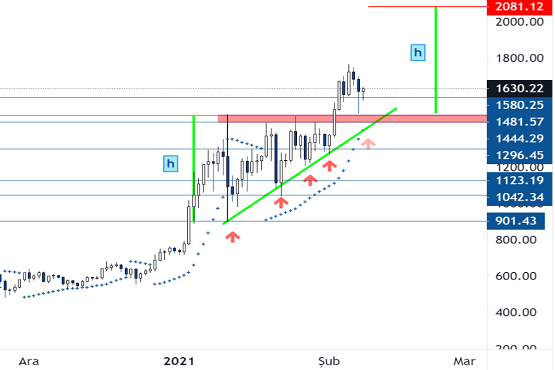 The AVAX / USD pair is listed at $ 30.20 this morning with a 1% price drop. With an increase of 40% the previous day, it became one of the most positively differentiated cryptocurrencies of the day. Bitcoin's news-based rapid rises shifted demand to the BTC side, and money from altcoins went back to BTC wallets. For this reason, we saw a short pullback in altcoins. But AVAX introduced a new project today that will act as a bridge between Avalanche and Ethereum networks. With the project, the biggest problems, Ethereum’s high transaction fees and the lack of sufficient depth for Avalanche, will be eliminated. Thus, the fast and smooth transition between the two can greatly increase the interest in AVAX for Ethereum investors.

AVAX / USD parity retraced 10% after testing its record $ 33.52. It is not a big loss for a cryptocurrency that has sharply increased its value by 40%, even though it experiences a small retracement by creating an "evening star", a candle reversal pattern in the 4-hour period. The reaction came from the $ 28.40 support and the next support will be followed at $ 29.60. If the $ 31.00 resistance is exceeded within the day, $ 33.00 may be raised again. One of the indicators, MACD, shows that the appetite to buy is decreasing and it is unstable. Momentum, on the other hand, exceeds the support level and gives signals of upward movement. For this reason, our main strategy for now is to join the gradual trend from the supports in the withdrawals and not to break with the main direction. 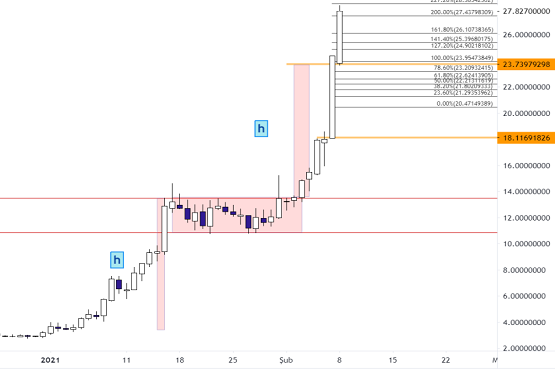 The XRP / USD pair is pricing at $ 0.4780, up 6% this morning. Despite the February 22 court day approaching in the positive trend, Ripple investors believe that the court results will be in favor of Ripple and has high potential for XRP in possible returns. Therefore, sales pressure in XRP has decreased and even the expectations for XRPs added to the portfolio at high cost have become more meaningful. On the other hand, the investors, who remained at high cost after the Reddit incident, also have a kind of HODL, that is, they hold them for a long time, preventing the price from slipping down.

When the XRP / USD pair is technically analyzed, there is a parabolic upward trend. Initial resistance holds at $ 0.4970. As we mentioned before, it would not be surprising to test the $ 0.5000 levels again. For the cruise below this level, there may be a flatness between $ 0.4500 - $ 0.5000. However, the continuation of both the trend and the double bottom pattern provides us room for movement towards the 0.55 - 0.58 $ band. Our main support and double bottom neckline is $ 0.37. 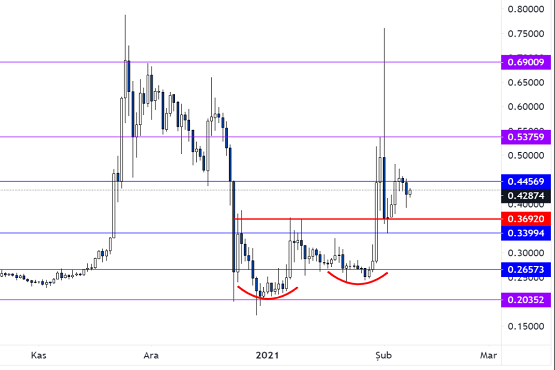 LINK is trading at $ 25.50 with a horizontal change this morning. The holding continues at the $ 25.00 channel lower band level, so the waters remain calm for the pair. With 2021, Link’s steady rise was very positive for LINK investors in the medium-long term. However, tokens with less depth but more immediate reactions in DeFi may experience an increase in interest for a while. This marks a quieter era for LINK. After the Tesla news, the increase in Bitcoin's market value, dominance and pricing may reduce the growth rate of the DeFi sector a little. This is negative for LINK, the token with largest market value. Therefore, a slowdown can be expected in the upward trend.

When the LINK / USD parity is examined technically, it is seen that the price is again within the boundaries of the bullish channel. Candlesticks above the $ 25.00 level, which is the channel lower band, indicate a one-time consolidation period for LINK with small increases and decreases. An upward break from resistance at $ 25.50 may bring the $ 27.00 level to the agenda, but the outlook is horizontal in the short term. 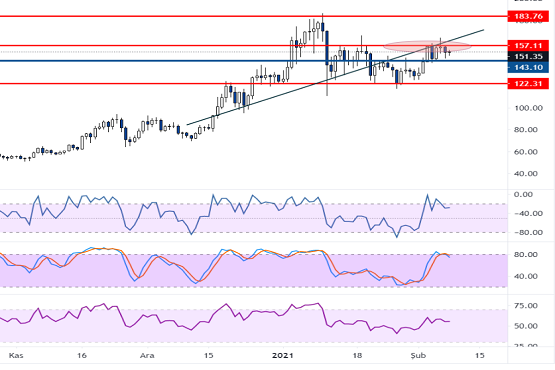 Horizontal movement has been dominant for LINK/USD pair in recent days. Chainlink, which is traded at $ 24.60, has remained a bit quieter than other altcoins in the last few days after rapid increases. The DeFi sector, which exceeded $ 35 billion over the weekend, broke a record, but pricing was more dominant for other DeFi tokens than Chainlink, the largest DeFi token with market value. Looking at the yield spreads with ETH, LINK, which has been a little more premium with its high returns for a while, can be expected to maintain its calm course. Since there is no discount, according to Ethereum, a new announcement can be watched if there is no news.

When the LINK/USD pair is technically analyzed, 4-hour candlesticks and sags have occurred behind the $ 24.50 level, which is the lower support of the bullish channel band. This indicates that a more calm and horizontal course is observed instead of upward movements from the canal support levels. It can even be concluded that selling pressure and instability are more intense. An upward break of $ 24.50 may again support the rise within the channel boundaries, but if the horizontal continues, $ 23.60 will be followed as the first support level. Indicators Stochastik has begun to move up from the support level, while Williams% R is giving a positive signal above the support level. Short-term goals for LINK have been completed. For this reason, we reduce our weight here and transfer it to the coins we have stated positively in the bulletin. 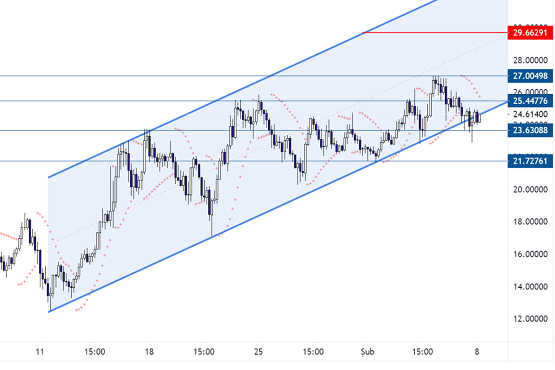 BAT / USD parity has tested the $ 0.4330 level, rising near to the flag formation target. Breaking the resistance at $ 0.4500 (this level is also the last segment of the Fibonacci correction) can bring a rapid increase, but the loss of interest in altcoins can also be slower for BAT. News-based Bitcoin price increases may be in the foreground for a while. Nevertheless, BAT, which has increased more than 100% in price as of 2021, is one of the remarkable crypto currencies in altcoins. Still, it continues to maintain its bullish potential so we are positive on the BAT side. Likewise, technical indicators are also in a position to support the rise. Support level of $ 0.4000 will be followed during the day. An upward or downward break may cause acceleration in the direction in which the break occurred. 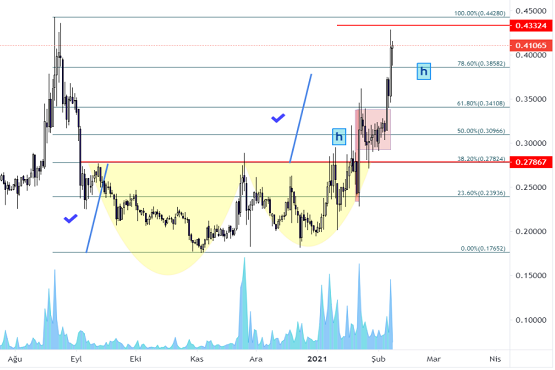