Grayscale, the world's largest digital asset management company, can periodically suspend some Cryptocurrency purchases. However, the increased demand prompted the resumption of discontinued Ethereum purchases, and there were 25,000 Ethereum inflows in 24 hours into the $ 4.52 billion Ethereum fund.

Miami Mayor Francis Suarez stated that he aims to use Bitcoin in three different areas. If preferred according to the target, municipal employees will be able to receive their payments in Bitcoin, and citizens residing in Miami will be able to pay their taxes in Bitcoin.

Litecoin's Mimblewimble developer David Burkett announced that the update is available on March 15. MimbleWimble is a blockchain design that provides more privacy and better network scalability. Design differences focus on a compact history and facilitate and speed up data processing and verification.

Music Application Is Being Built On The Algorand Blockchain

Opulous, the first provider of DeFi platform powered by music, will perform the functions of decentralized banking for artists using the Algorand (ALGO) blockchain. Thus, Opulous will serve as a loan pool that artists can borrow and contribute to. Artists who want to borrow money will receive loans with their royalties as collateral

ARK Investment stated in its report that Bitcoin prices could at least double. In the annual report published, if all S&P 500 companies invest in Bitcoin with only 1% of their cash, Bitcoin prices will see an additional $ 40,000 increase, which is more than twice the current price of Bitcoin.

MicroStrategy Conference Begins Today
The conference to be organized by MicroStrategy on February 3-4 starts today. At the conference, an overview of Bitcoin will be discussed and the importance of Bitcoin and cryptocurrency adoption for institutional investors will be explained. MicroStrategy CEO Michael Saylor stated on Twitter that corporate companies are very eager to get to know Bitcoin closely.

Bitcoin is trading this morning, up 3.5% at the $ 36,700 level. While the market volume of crypto currencies was 8% higher than yesterday, the dominant part of this movement was Ethereum, not Bitcoin. Bitcoin's dominance allows for altcoin movement at 62.3%. On the other hand, while the BTC interest of institutions continues, MicroStrategy announced yesterday that it has made an additional BTC purchase of $ 10 million. Grayscale, on the other hand, remained with 254 BTC on the basis of amount, even though there were purchases. In Bitcoin, the number of active addresses broke an all-time record. We see that the fundamental side is supporting Bitcoin transactions.

When we look at BTC / USD technically, the 30-day moving average has been broken with the $ 35,100 level. With the passing of this average, the declining trend that started at the record level of $ 42,000 was also broken. Thus, while there was no minor trend that could create selling pressure, the MACD in the diary signaled the intersection of the averages in the direction of buy. Momentum continues to rise. When we combine technical and fundamental analysis, the outlook for this process supporting the Bitcoin price is positive and positive. 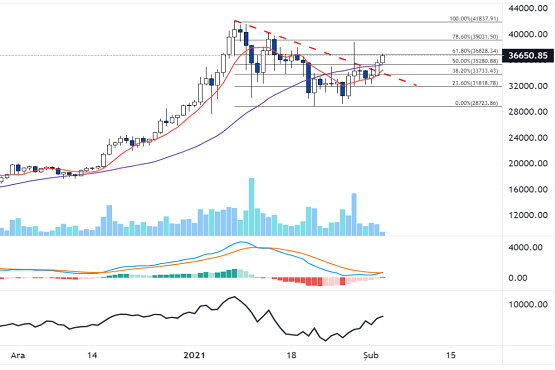 Ethereum refreshed its record yesterday by breaking the record high of $ 1480 and saw a rapid ascent to the $ 1560 levels. Before Ethereum's futures contracts were first traded at CME on February 8, Grayscale reopened its ETH purchases to its accredited customers. Yesterday, close to 25 thousand ETH portfolio was entered. Ethereum, which will be open to corporate customers after being traded on CME, will improve its customer base and parallel prices. It paves the way for price movements to turn into accelerated increases. Therefore, we can enter a new process in Ethereum after Grayscale and CME. The TOBO formed on the ETH-BTC shear highlights the 50% upward shear movement, which reveals a higher performance forecast of ETH than BTC on a return basis.

When we consider ETH / USD technically, the rising triangle squeeze between $ 900 and $ 1480 was broken yesterday. In triangle formations, the target is at the perpendicular edge of the triangle, and here is a daily period look that extends the target to $ 2050 levels. In this view also supported by momentum, according to Fibo retracement levels, $ 1530 is near support and $ 1590 is the resistance that coincides with the correction level. The outlook is positive and bullish. 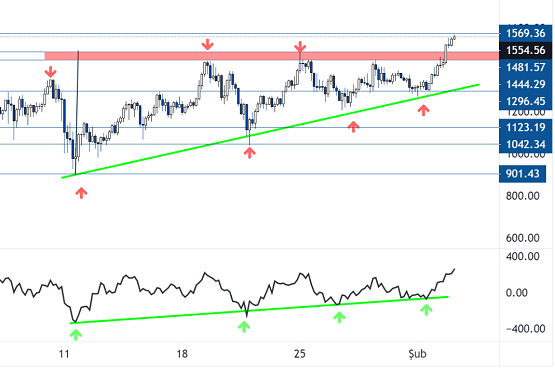 The AVAX / USD pair has risen 5% this morning, hovering at $ 14.20. The $ 13.50 critical zone also coincides with the channel midband, and we have stated that an accelerated rise can be expected for AVAX by exceeding it. After moving towards the level of $ 14.30 remaining in the upper zone of the channel, the permanence here will be important. Movements above $ 14.30, which is the upper band of the channel, may bring new records to the agenda. In possible "pull back" moves, the strong support of $ 13.80 is also at the channel midband level. If the above $ 13.50 is maintained, ignoring the sags for the continuation of the uptrend, there is no other level that previously worked as resistance. 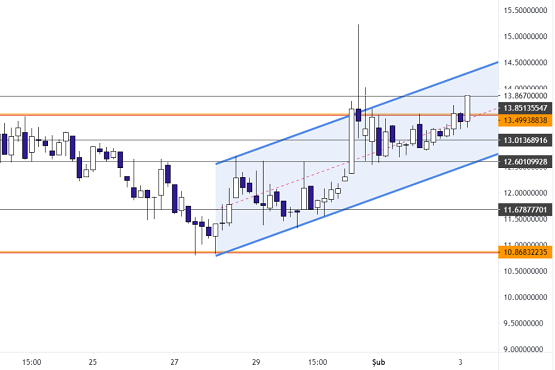 Ripple is listed at around $ 0.3820, up 2.5% this morning. When looking at XRP's on chain data, some important data stand out in the sharp decline following the rapid rise, which we discussed in detail in our previous bulletins. It is seen that XRP was sold in whale accounts holding XRP and Ripple's own cold wallets when the XRP was pumped. On the other hand, according to Santiment data, it is seen that new purchases increased at levels close to the peak, and low-balance accounts expand their investments in the direction of XRP. We think that the $ 1 scenario created in the forums brought these purchases. The date of injecting 1 billion XRP into the market, which was made to increase the supply at the beginning of each month, coincided with this rise. Although it seems unlikely to us that this is a coincidence, it is seen in the data obtained that the low balance accounts are more harmful than the whale accounts with the FOMO created.

When we consider the XRP / USD parity technically, it is seen that the doji candle, which symbolizes the instability in the daily period yesterday, was formed after the 50% decrease experienced two days ago. The $ 0.3750 level is therefore the most important level to watch for XRP today, as well as the neckline of the previous double bottom. Staying above this point may be the expected response level for investors who buy at costs of $ 0.40-0.50. Prices below the $ 0.3750 level may again bring the $ 0.3300 support to the agenda and jeopardize possible reactions in the course of $ 0.37. 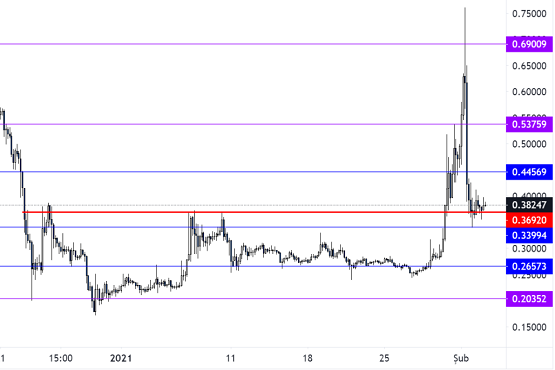 Litecoin is trading at $ 153 levels this morning with a gain of close to 8%. The MimbleWimble update date was announced as March 15 in Litecoin, which could not respond to the price flow of a market and has news such as airdrops and updates. With this update, updates such as scaling issue and more will be saved. The number of new addresses in Litecoin has been at the highest quality since February 2018. We discussed yesterday in our Crypto Zoom publication, which stated that the increase in the number of "recipient addresses" could activate Litecoin. In an environment targeting Litecoin, even on the chain, the shear between metrics and price is also maintained. Therefore, either metrics should deteriorate or the scissors should close in terms of price heading. For distortion of metrics, the second grade is pressing more heavily for distorting news in the market.

When we consider the LTC / USD technically, we first start from the negative scenario. The trending OBO view is available. Because if 157 $ does not break up, it will have made a "drawback", which we can talk about OBO this time. But it will run to forecast that $ 157-160 is running to enter the competition, and it could also be the MACD's buy signal in the daily period. The negative scenario to stop the loss emerged in cautious judgment, but with the support of the MACD and the basic outlook, it should be noted that this negative scenario in LTC will be alleviated with the $ 160 break. The outlook is bullish and positive. 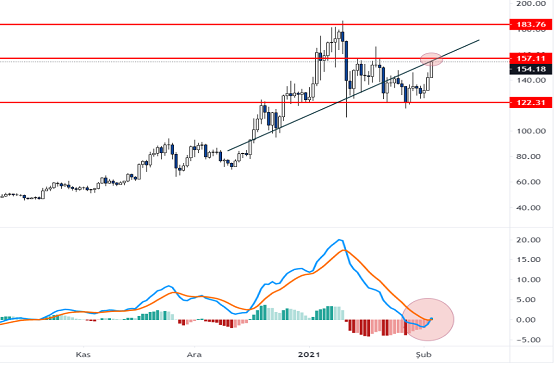 LINK is pricing at $ 24.00 this morning, up 1.5% against the dollar. Ethereum stands at 25% while LINK is 15% in weekly returns. The intermittent return spike can be expected to be closed by LINK. New records on the Ethereum side are positive for the LINK token with the largest market cap in the ETH consensus. At the same time, the decentralized financial sector DeFi data for LINK, the largest DeFi token, is also very important, and the DeFi pulse index continues to increase with a 3% rise. The amount locked in DeFis has reached 30 billion dollars.

The LINK / USD pair is strong in the technical outlook. The price is holding above $ 23.70 in the Fibo'61.80 correction zone. On the other hand, the midline of the $ 23.00 Bollinger band is also below the price and has become support at the lower channel level. These indicators are very positive for Chainlink (LINK). An upside reaction from the $ 23.00 level could push pricing to the $ 25.80 Fibonacci retracement followed by the channel mid-band of $ 27.00. 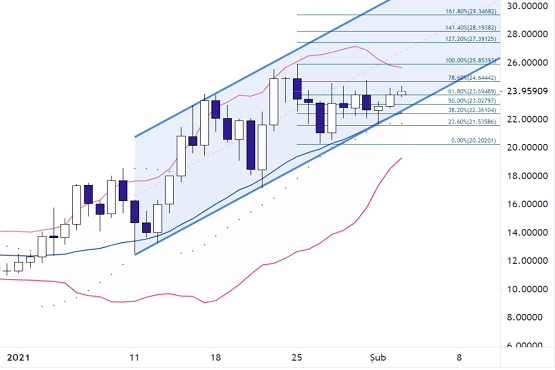 The BAT / USD pair is priced around $ 0.32 this morning with a horizontal change. For the Basic Attention Token, which we continue to like in the macro part, we see that a flag formation has been formed in addition to the double bottom formation in the technical view. The flag formation points the $ 0.43 zone as the target. For pricing in the $ 0.32 zone, the $ 0.34 initial resistance level in the Fibo'61.80 slice will be followed, followed by the $ 0.38 retracement level in the zone indicated by the double bottom formation. BAT's price levels are still 30% lower than the all-time record. 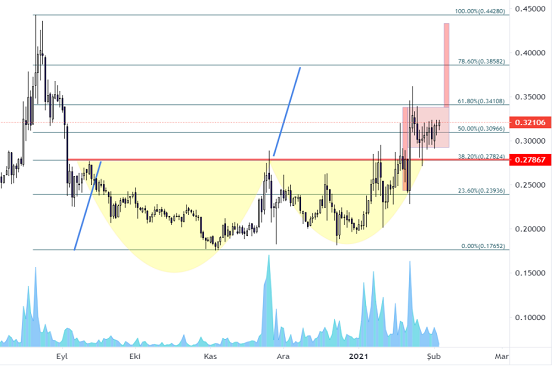