Grayscle Adds LINK and BAT to Its Trusts

Grayscale, one of the largest crypto investment companies, has added 5 new cryptocurrency purchase contracts among its products. With this development, products including Basic Attention Token (BAT) and Chainlink (LINK) will be able to be purchased under Grayscale contracts.

As a result of the US Central Bank Monetary Policy meeting held yesterday, while the interest rates were kept constant, it was seen in the projection that the inflation will be 2.4% in 2021, whereas the interest rates will remain in the current range of 0.00-0.25 points including 2023. Powell's emphasis on the economy's uncertainty in the long term was also one of the important topics of yesterday.

Chinese technology company Meitu announced that it has made another $50 million investment in Ethereum and Bitcoin. With this investment, the company has invested a total of $90 million in cryptocurrency this month.

New Letter from the SEC to the Court

The European Securities and Markets Authority published a report on the risks in financial markets on March 17. Affiliated with the European Union, the institution highlighted the risks in the unregulated cryptocurrency market and warned against the possibility of investors losing all their money.

The nominee of the American Currency Control Office (OCC) is Mehrsa Baradaran. Biden's favorite name Baradaran was not welcomed by the cryptocurrency community due to her negative statements about Bitcoin in the past.

Chinese company ZJBC has announced that they have allocated a budget of $155 million for Bitcoin mining. The $900 million worth company will supply 2 thousand mining equipment by May despite legal challenges in China.

On March 16, a law firm has requested to be a party in the lawsuit between SEC and Ripple in order to represent more than 6 thousand XRP investors. The law firm's request was denied by the judge.

A remittance platform located in Nigeria, the world's largest remittance receiver, receives an investment of 750 million dollars from the Stellar Foundation. The Nigerian platform, where cryptocurrencies are getting more and more popular, makes money transfers using the Stellar network.

Bitcoin is trading at the $59,000 level this morning, with a slight horizontal change. According to the projection published at the FOMC meeting last night, the committee members do not see changes in the interest band including the year 2023 despite the 2.4% inflation expectation of over 2% this year and an inflation expectation of just over 2% by 2023. This means that fiat money will lose value against inflation; and cryptocurrencies having no inflation and gold as a value storage tool have been positively affected by this situation. Hong Kong-based Meitu announced that it has added about $22 million worth of Bitcoin to its portfolio. With this purchase made after the news of Visa, we see that the incomplete demand of institutions started before a new price movement. If the corporate FOMO starts in the next period, it can turn a new page for BTC value.

When BTC/USD is technically analyzed, the price holding below the bullish channel that has existed since February 28, has gained support from the $54,400 zone and touched both the Fibo reaction zone and the channel mid-band at $59,120. However, the decreasing trend in momentum was also broken and triggered purchases. It seems that in in case the $59,120 level is broken in BTC where the $57,000 level is intermediate support, there can be movements to the upper band of the channel to $62,400 levels. There is a horizontal but positive appearance this morning. 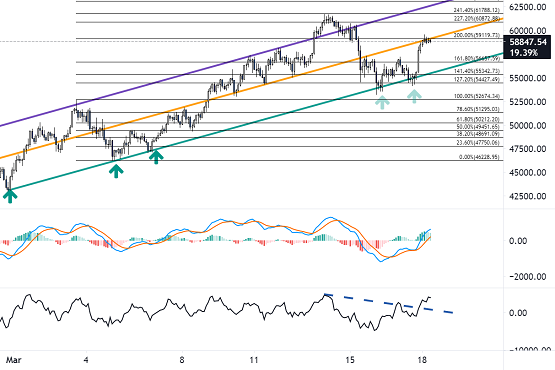 After the FOMC meeting held on yesterday evening which had positive effects on cryptocurrencies, Ethereum has gained close to 7% to reach the $1,820 band it was traded this morning. Ethereum prices started to recover from the $1,750 zone after Ethereum remained discounted comparing to BTC. After the announcement of new and additional ETH purchases of the Chinese company Meitu, it is seen that the corporate demand in ETH was consolidated. The company's total ETH assets reached $50.5 million.

When ETH/USD is technically analyzed, it is seen that ETH which started a new upward trend after the breakdown of the upward channel, has a lively momentum and considering it in 4 periods that it has a stronger purchasing power than 4 days ago. In addition, the double bottom formation in the $1,690 and $1,800zones started to form with the breaking of the $1,800. Prior to the double bottom formation, where its target reached $1,900, the Fibo'78.6 retracement zone at $1,877 is in the resistance position. 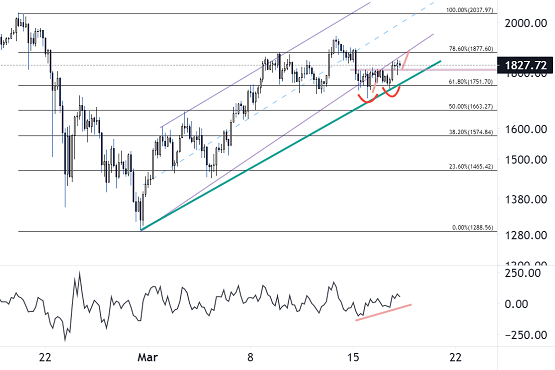 Although the AVAX/USD parity has not completed the ongoing consolidation process since February 23, it is still possible to see it gains strength with the rising lows. After the lock opening on March 9, the parity actually showed a strong resistance by succeeding to increase demand at the same rate with the increase in supply.  AVAX has moved away from its record recently due to the problem with the Avalanche platform's node mapping.  In line with the new developments we follow, we can see that it has managed to become the main network for many successful, open-minded projects. The Clubhouse event that Avalanche team will hold today is on the calendar.

On the other hand, the AVAX/USD parity was able to hold at $22.30 and then move up to $27.50 which is its next support point. Although the reactions from these support levels are horizontal, when the critical resistance of $35.00 is exceeded, buying appetite can gain momentum on the AVAX/USD parity. On the other hand, $35.00 is also the confirmation area for double bottom. The confirmation target is above $35.00, signaling that the $47.00 zone will be tested. 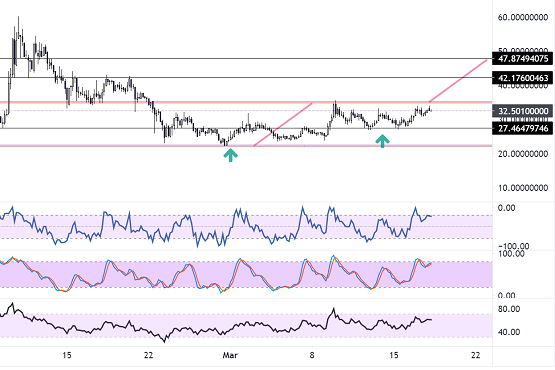 Ripple is pricing in the $0.47 zone, up 1.4% this morning. We continue to keep a close eye on developments, as the case with the US Securities Commission is one of the most important catalysts on Ripple's side. After Ripple investors has reached to about 6 thousand people, contacted a well-known successful American lawyer and wanted to be a third party in the lawsuit, these requests were rejected. It is unclear whether this development is for or against Ripple. The current letter sent by the SEC to the court explains why Ripple users’ financial records are requested. The SEC argues they have evidence that "Ripple founders used XRP." The opening defenses to be held on April 12 will be followed with caution.

The XRP/USD parity failed to hold above the $0.49 zone and returned within the horizontal channel boundaries. For the parity, which is in the upper zone of the channel between $0.43 and $0.49, it is also in the upper zone of the Bollinger band, raising the support levels and increasing the potential for possible responses. Permanence above $0.49 may leave the consolidation period behind and contribute to the trend with buyers. Oscillators signal positive with rising trough levels. 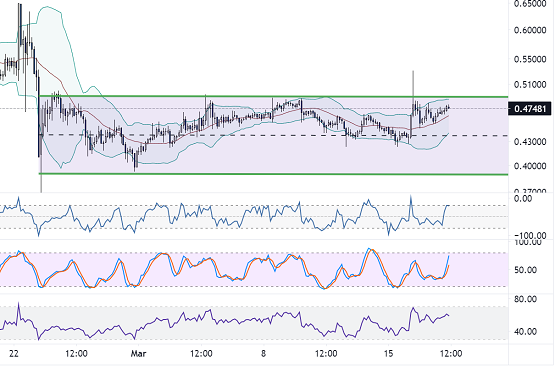 Litecoin broke the technical triangle area to where it was located after the earnings hardened even more since it remained discounted on a weekly and monthly period compared to Bitcoin, and rose above the $200 level. LTC, in which the movements are technically more prominent, is still 20 points behind of BTC, although the weekly earnings gap between them is closed. In LTC, where the MACD and momentum are also on the rise, the middle band of the channel points from the $215 level to the upper band of the channel and the potential of the yield shear to the $240 levels. The intraday support zone will be followed as the major level of $205 corresponding to the Fibo'23.6 slice. 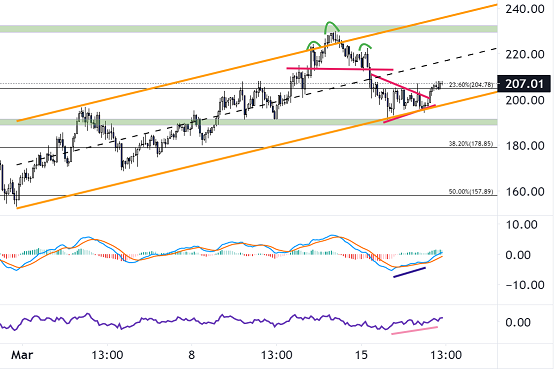 Although Chainlink comes up with a 3% withdrawal this morning, it is experiencing a 10% price gain in a 24-hour period. Grayscale, one of the largest crypto funds, has announced the previous day that it will add LINK to its products, and Chainlink increased by about 15% in the 4-hour price candle. For now, this news-based increase can be considered as a start. In addition to price expectations and positive news flow, LINK contracts to be sold by Grayscale in the coming weeks can meet accredited investors and provide an institutional growth for LINK. This means that LINK, which has already fairly stable returns, will deepen its volume and expand its investor scale.

The LINK/USD parity was weak below the $27.80 channel lower band; however, with a sudden and accelerated reaction, it took itself to the $30.00 and upper zone. After the $31.40 level was tested, the triangular appearance created by the parity became heavier in this area as the triangular appearance was the resistance zone, and it priced again in the $30.00 zone. Prices settled in the upper zone of the Bollinger band create a strong course expectation. The momentum to be caught at $31.70 and above may carry the parity to the $42.00 zone, which is the target of the triangle formation. $29.00 will be the first support. 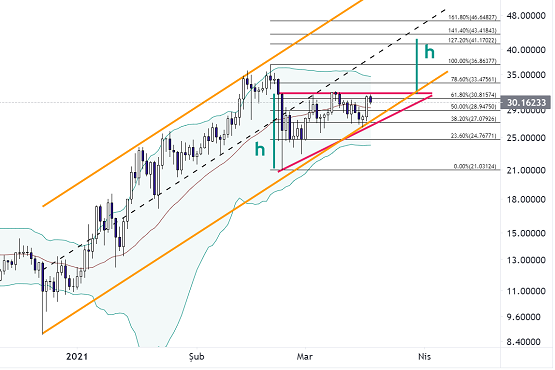 The BAT/USD parity is retreating by 1.5% this morning, pricing at $1.20. After Grayscale has announced that it will add Basic Attention Token to its cryptocurrency contracts, the parity has surged up to 50%. The fact that the Brave browser with which BAT is integrated has reached more than 25 million users, the digital advertising field is developing rapidly, and most importantly, people find privacy-focused platforms more attractive are all helped to shine the star of BAT.  On the other hand, 1.4 billion of the 1.5 billion supply is currently in circulation. When it comes to fundamental analysis, it is not surprising that BAT is one of the 5 crypto units that Grayscale chose to include in its portfolio after conducting research on many coins.

BAT/USD parity made a rapid increase towards the $1.30 target after exceeding the $0.86 flag confirmation level. In the short period, it is correcting by 14%.The 7 and 30-day DEMA (double accelerated exponential moving average) shows that 1.15 is weekly and $0.85 is monthly supports. The $0.71-0.84 zone was the major zone where prices were supported and consolidated. The outlook is positive and the uptrend continues. 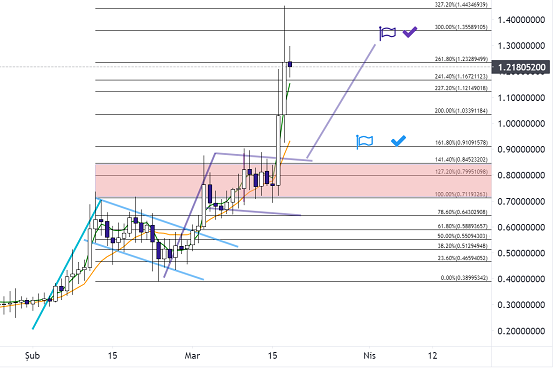