Users of Solana digital wallets Phantom and Slope claimed that millions of dollars were stolen from trusted apps or an unknown link linked to the wallets. The Phantom team stated that their team is working on ski to reach the solution of the reported vulnerability in the Solana ecosystem, noting that this is not a problem specific to Phantom. Solana lost 3.5% of its value after the hack news.

Why Amazon and VeChain Will Enable Carbon Management Services

The VeChain Foundation recently signed an agreement with Amazon Web Serviced to support VeCarbon platforms. VeCarbon will enable companies to manage their carbon footprint and gain insight into carbon emissions to stay in line with their goals. In this project, Amazon is meeting the need for large-scale data storage and analytics solutions.

Shiba announced the name of the Shiba Inu CCG game, which started to be developed last year, with a share they made on their Twitter account. The name of the game was announced as Shiba Eternity. Shiba is partnering with Playside Studios for the game.

Solana marketplace Magic Eden announced on Tuesday that Ethereum NFTs will now be available. Thus, Magic Eden will now support the two largest blockchains. Magic Eden also announced that it will provide cross-currency for its SOL and ETH NFTs, which will make trading easier.

Yesterday, China-Taiwan tensions escalated with the visit of American spokeswoman Nancy Pelosi to Taiwan. Although we thought that the impact of this on the markets would be high during the last night, both the US and the crypto market managed to remain strong. Although that tension has not been priced in, there is still a negative atmosphere in the markets. We think that the impact of the PMI and unemployment data to be released this week in the US will be great. Because of this, we may see a crypto market with lower movement capacity during the day during the week and pre-determined according to the statements.

Bitcoin is priced at $ 22,839 with a loss of 0.64% in the morning hours. BTC, which fell below the channel formed by its horizontal movement with the breakdown of the 23,500 level, is currently making a similar move between 22,600-23,200. Although we have seen that the support level of 22,650 has been tested many times, it is a positive development that it has not yet been broken. When we look at the hourly chart, we see that the volume has also fallen considerably, and it seems that the horizontal movement will continue until a development that will direct the market takes place in BTC. 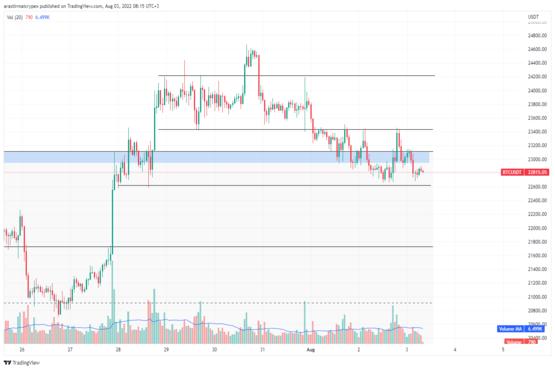 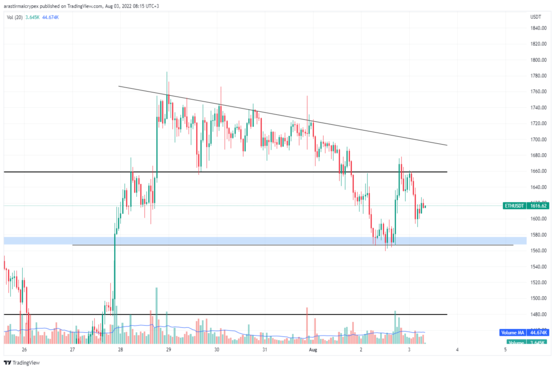 AVAX, which has gained 0.92% as of the morning hours, is priced at $ 23.05. AVAX had retreated to the 22.35-22.50 band, one of the key demand zones. From there, he made an upward move with the support he saw and managed to rise to the $24 level. Then, during the night hours, it tested the 22.35-22.50 band again and started its upward movement with the support it saw from there. We can say that the primary target for AVAX, which is currently priced at $ 23, is to break the $ 24 levels upwards. 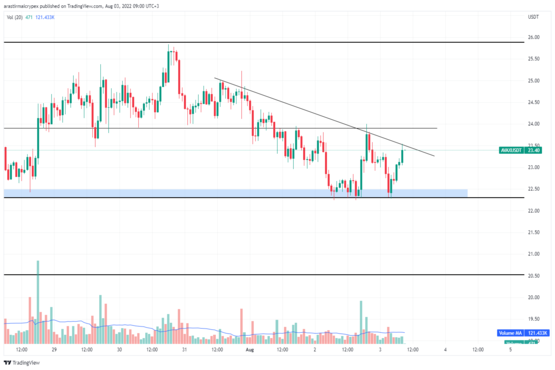 XRP, which lost 1.29% of its value in the morning, is priced at $ 0.3667. When we look at the Ripple hourly chart, it is making a downward channel movement. Ripple, which has tested the channel double-sidedly, is currently pricing in the middle of the kanbal. Ripple, which is trying to break the upward breakdown of the channel mid-band, has to break this channel movement to the upside in order for the downward movement to end. At the same time, when we look at the daily chart, we see that Ripple continues its rising triangle form, but declines towards the channel lower band. 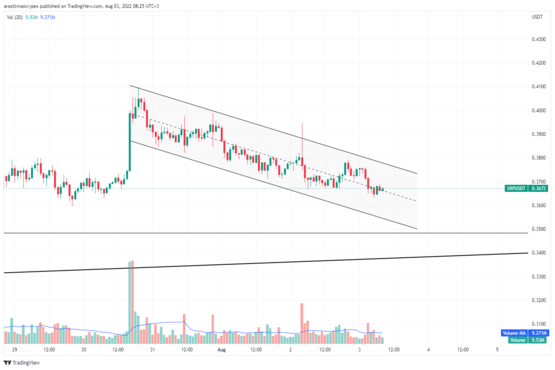 LTC is trading at $57.63, down 0.72% as of the morning hours.  LTC showed everyone its weak negative pricing after returning into the channel. LTC, which returned to that trend again after breaking the resistance level of its falling movement in mid-July, sees that the same level is currently acting as support. 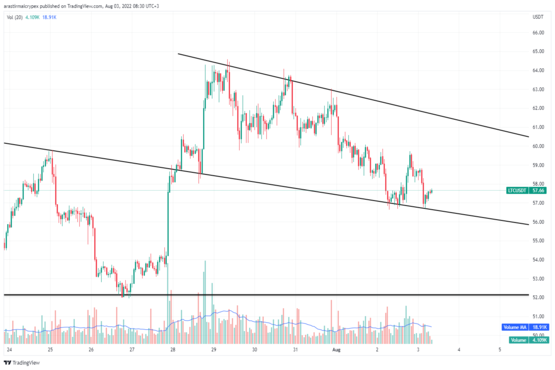 LINK is gaining 1.83% today and is pricing in at $7.31. LINK's decrease yesterday was highly affected and even negatively decoupled. However, it started to rise again with the support it saw from the 7.00-7.15 range. The critical level for LINK has not changed for months. An upside break of the 7,591 level and daily closes that will take place there are necessary. In LINK, where we see that the falling movement it is currently making has narrowed considerably, an upward breakdown may occur if the market remains in this way. 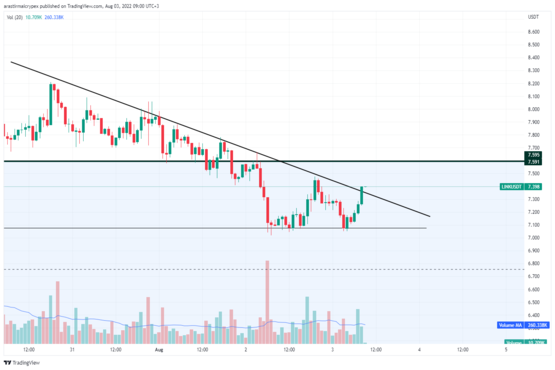 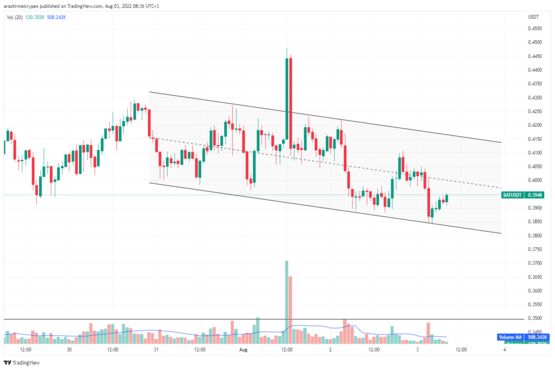