In the question about the BTC investment directed to the CEO of Guggenheim, he stated that the company has not realized this yet, but they will receive the opinions of the investors on the issue. However, he stated that they have already bought Bitcoin for some of their private funds.

Tether CTO, Paolo Ardoino, stated that Tether's required documents to be delivered on January 15th will be delivered in full and everything will continue normally after January 15th. Tether's lawyer, on the other hand, announced in a statement published on Twitter that the documents are not ready yet and the period will be extended.

Ripple co-founder Jed McCaleb had not sold any XRP for 25 days after the lawsuit between XRP and SEC. McCaleb, who sold 28.6 million XRPs as of January 18, also gave sales orders for 9.747 million XRP.

The UK-based company Ruffer, which manages billions of dollars in assets, announced in December that it made 100% profit from its $ 746 million Bitcoin investment. In its report, the company stated that the investment made by the difficulties faced by many currencies in the world and the fear of inflation was a very appropriate move.

UK To Use Blockchain For Covid-19 Vaccine

Thanks to the agreement with the UK Hedera Hashgraph, it announced that it will monitor Covid-19 vaccines on the blockchain system efficiently and regularly. Hospitals in certain regions of the UK announced that they will soon start to monitor the temperature of vaccines that need to be precisely recorded on blockchain.

Grayscale increased the total number of BTC assets to 632 thousand with the recent purchase of more than 16 thousand Bitcoin. Realizing the highest daily purchase of 16,000 Bitcoins in a day, the fund manages 3% of the limited Bitcoin supply of 21 million.

Dubai Financial Services Authority has announced that it will take new steps to regulate existing and potential problems in cryptocurrency transactions and address security risks together with Dubai International Financial Center. The planned arrangements are expected to be completed in 2021.

Bitcoin is trading slightly over $ 35,300 this morning. Bitcoin's dominance was quantitatively at record levels with 72%, after a record of 42,000, and a return was expected. On top of that, we expect the Bitcoin dominance to drop back to 60% in the first place. For this reason, we deduce a period in which altcoins will stand out on the basis of yield. Bitcoin can also maintain its idle period during this period, and unless new and large corporate buyers arrive, horizontal movements in a wide range of 30-40 thousand can continue.

When we consider BTC / USD technically; We see that the Fibo, which is at the $ 35,300 level, has received support from the 38.2 retracement level and the oscillators have also returned from oversold at this point. For now, transactions are intense, with our horizontal band being $ 34,600-37,500. While news-based developments are needed for any breakouts, the outlook horizontal and horizontal trading strategy continues. 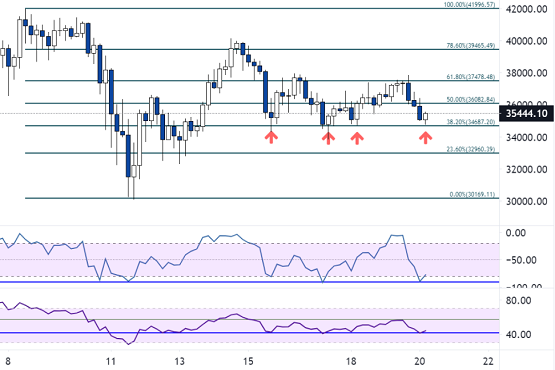 Ethereum broke the record $ 1420 after 1100 days yesterday, testing its new high of $ 1140, with a 16% increase overall. Ethereum, which retreated slightly after drawing a new record yesterday, is trading horizontally at $ 1360 this morning. With the Bitcoin dominance falling below 65%, it is heralding that the season of DeFi tokens using ETH and Ethereum consensus may begin. We think that the ETH-BTC shear broke 0.35 for the first time since 2018 and its potential could rise up to 0.50 if the movement starts. With the listing of Ethereum in CME on February 8, we can say that a new momentum may come to its movements, and with the inference of this, we expect the continuation of the current movement in ETH. 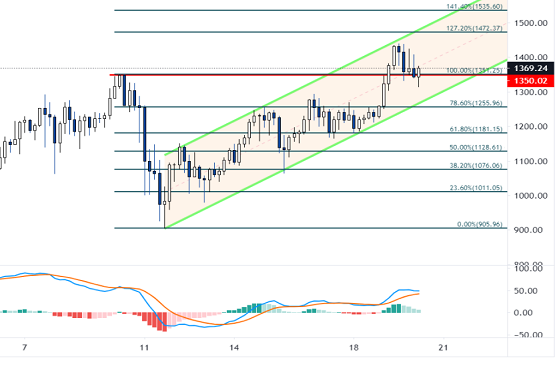 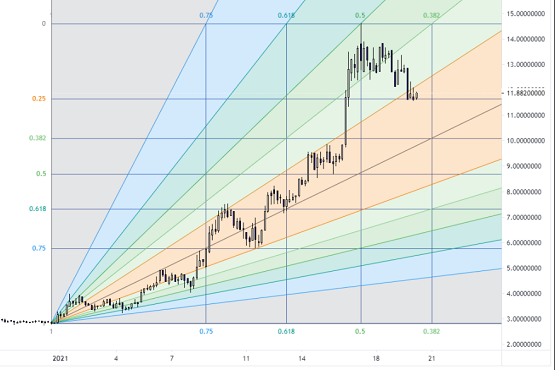 The XRP / USD pair is pricing around $ 0.29, down 1% in the morning hours. Although there is no significant development on the Ripple side, the repeated accusations and regulatory demands of regulators and diplomats against cryptocurrencies are now scaring investors of cryptocurrencies, which have not yet faced a similar charge, rather than XRP. In the case, which will be a guide for the entire cryptocurrency community, rather than between the SEC and Ripple, the concern of what will happen to its investor rather than the decision and criminal proceedings on behalf of the Ripple company is preserved. Nevertheless, although the announcement of XRP as a security will be subject to taxes and sanctions under the relevant law in possible sanctions, XRP prices are priced according to the investor interest of other countries, especially Asia, since there is almost no platform left for US investors to trade. 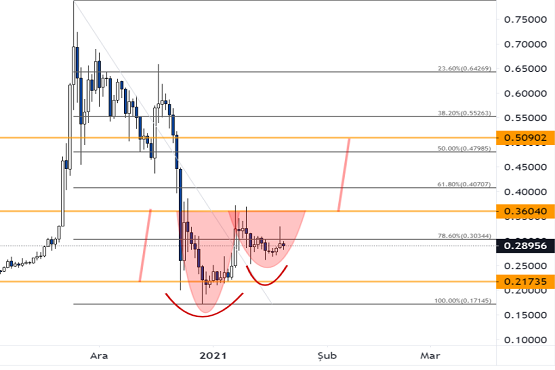 Litecoin is priced around $ 153 this morning with a slight buyer. It basically supports the fact that it will join the Flare Network network and that the Wİmble Mimble update is expected in February. In addition, the high correlation with Bitcoin also created an expectation of movement in Litecoin. But the desired performance did not come in Litecoin. It is still 10% behind Bitcoin in terms of monthly return. There has been an increase in the number of active and new addresses in the last month.

When we consider the LTC / USD technically; Although the general outlook is horizontal, an upward channel has formed in the four-hour period. The channel subband is also crossing the Fibo'50 retracement zone of $ 148, and this morning we see LTC making an upward turn from exactly this point. Because if we look at the resistance points that can be tested; Fibo’s $ 157, which corresponds to the 61.8 correction zone, and the channel midband is $ 164. These levels have been tested for the last two days. The look is horizontal and positive. 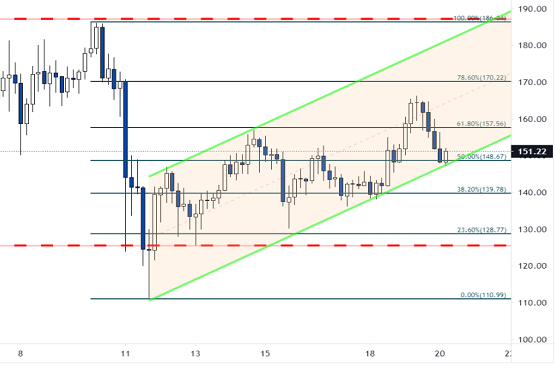 The LINK / USD parity is priced around $ 20.00 with an increase of 1% in the morning. LINK retreated somewhat, accompanied by profit sales, after hitting an all-time high of $ 23.75 against the dollar. With the Bitcoin dominance falling to 64.9%, the situation seems very positive for Chainlink, which is at the top of the DeFi currencies and ranked first in the market value size of DeFi, when we received the signals of the altcoin season. With the Ethereum record breaking the previous day, Chainlink, which has many smart contracts using the network of Etherum, the strongest altcoin, may be one of the crypto currencies that will take the most share in the ETH-led rises.

When the LINK / USD parity is analyzed technically, it is seen that Chainlink, which exceeds 30% in weekly returns, has been in a horizontal course for the last few days. However, in monthly returns, we can see that ETH can go half as long and LINK's willingness to attack to close this shear. For price holding above the Fibo retracement coming to the $ 20.00 level, the lower $ 19.60 level is also working as support. For now, oscillators are also signaling a recovery from the bottom for the LINK / USD parity, which is priced between approximately $ 19.60 - $ 23.00 with sags. In Chainlink, which has a high return potential with the acceleration of the Altcoin season, we see that oscillators support the positive outlook and the trend has been on the rise as well as the trend for the last few days. 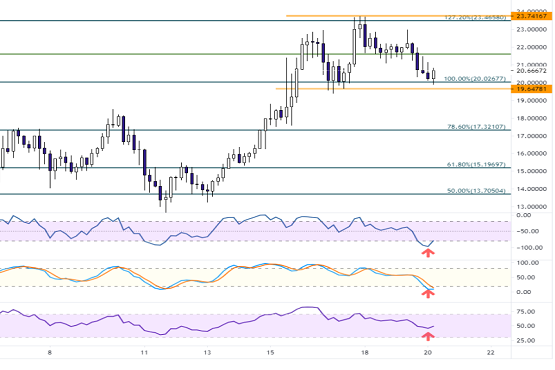 The BAT / USD parity is priced around $ 0.27 in the morning, with an increase of 0.7% on a daily basis. It has been one of the pairs that has made a very successful debut with the projects and updates it has been involved in in recent months. BAT, which is in the decentralized e-commerce and marketing field and puts privacy in the foreground, has performed well with the increasing interest in privacy coins after the Ripple lawsuit.

When we consider BAT / USD technically; Although the Fibo 78.60 correction and the $ 0.29 level, which is the upper band of the bullish channel, were tested, it could not be broken on the upside and profit sales were seen towards the middle band of the channel where the $ 0.026 level passed. Movements continue in the upward channel. However, as the trend and canal slope are close to horizontal, price developments and peak levels are tested less frequently. 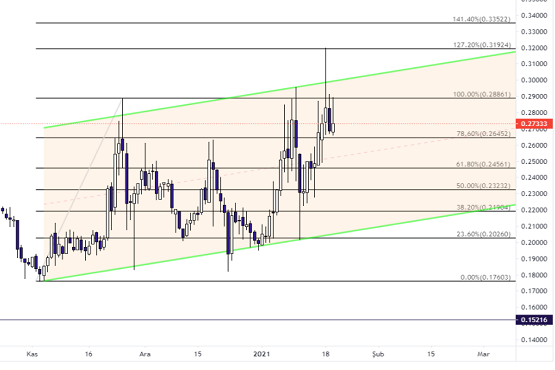