Half of UK Citizens Want to Get Crypto-Backed Loans

According to one study, 51% of Britons said they wanted to take out loans using their digital assets as guarantees rather than traditional methods.

Bitcoin (BTC) and other cryptocurrencies have rebounded after a painful few months of decline, and thousands of short-selling investors have been liquidated in the process.

Texas Senator Ted Cruz reiterated his support for the cryptocurrency industry by supporting an amendment created by Ron Wyden, Patrick Toomey and Cynthia Lummis against negative cryptocurrency provisions in the infrastructure bill.

More Than Half of Consumers Want to Buy Products with Cryptocurrencies

A recent survey reported that about 60% of respondents were willing to use digital assets as a payment method for goods and services.

British bank Standard Chartered will offer cryptocurrency brokerage services in Ireland through its Zodia Custody subsidiary. The head of digital assets will focus on institutional investors.

The Monetary Authority of Singapore (MAS) has informed several digital payment service providers that they will receive licenses. Singapore's status as Asia's crypto hub is guaranteed after a crypto exchange is approved for licensing, according to the researchers.

Once the new virtual assets law is adopted, Ukrainians will be able to legally hold, modify and spend cryptocurrencies.

The first NFT series will include five variations of the Marvel superhero, ranging from $40 to $400.

Bitcoin, which lost about 1.0 percent in the morning, is priced at $43,373. As of July 21st, we see that a large number of short-positioned investors have been liquidated in Bitcoin, which we see as dominated by strong movements. When we examine the chain data, with this sharp move, net increases are seen in the 7-day average of the number of new addresses and the number of active addresses. BTC has regained the trust of investors and will attract more investors in the coming days. 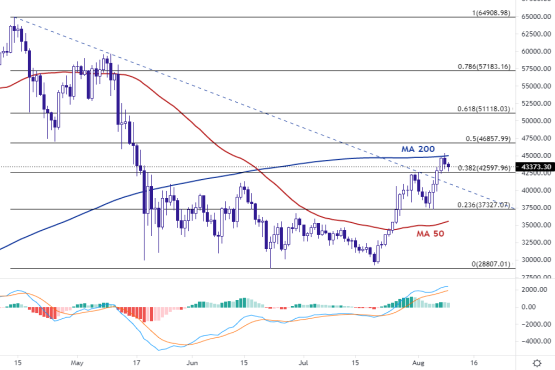 Ethereum, which lost about 2.7 percent in the morning, is priced at $2934. With the london hard fork taking place, the price movement has accelerated. A total of 16,149 ETH fuels have been made since the first day of the London hard fork, which also goes to regulate the supply of ETH, amounting to approximately $47,485,585.79. We believe we will continue to monitor the impact of london hard fork on ETH price in the coming days.

When we consider the ETH/USDT parity in technical terms, the sharp rise on Saturday continues to signal macd when the ETH daily period is examined, followed by a slight correction on Sunday. ETH, which has fallen from its May 12 peak level of $4374 to a June 22 low of $1700, is priced below that level, unable to hold above 61.80% of correction levels. If the $2900-$2935 band, which is the important support level in the horizontal, does not break downward, we expect the rises for ETH to continue. 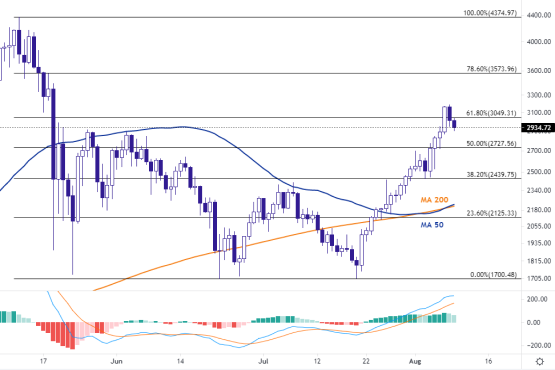 The AVAX, which lost about 0.55 percent in the morning, is priced at $14.74. When we examined the AVAX/USDT pair technically, AVAX continued its price movement within the existing rising channel as of July 20, and at the weekend it experienced a pullback towards the channel mid-band with a reaction of $16.1 coinciding with the channel upper band. AVAX, which is priced below the channel middle band, has lost the trend momentum that has risen in the 4-hour period. Considering the increased trading volume on the sales side, 14.15 is the first level of support for AVAX, which corresponds to the Fibo'23.60 slice. 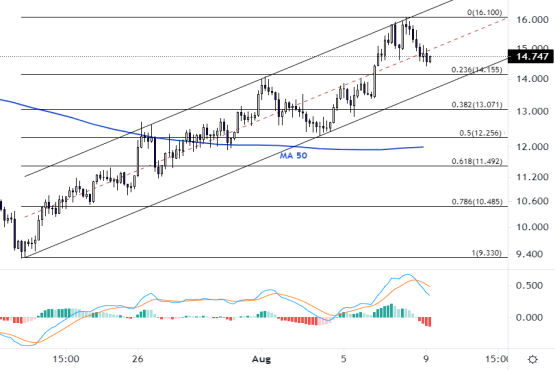 XRP, which gained about 1.8 percent in the morning, is priced at $0.794. There is currently no new news feed for Ripple, which we followed the positive news flow on the case side with the SEC last week. When we examine the XRP/USDT parity technically, XRP, which continues to move in price within the existing rising channel as of July 20, has not been able to sustain itself, although it has risen above the 200-day moving average of $0.7931 at the weekend. When we examine the XRP, which is priced just below its 200-day average this morning, in a 4-hour period, we see a sell signal from MACD. If intraday retreats continue, our first target for an uptick in XRP, which we expect to find support at $0.7495, which corresponds to the channel sub-band and Fibo'23.60, is the $0.84 level, which corresponds to the channel mid-band. 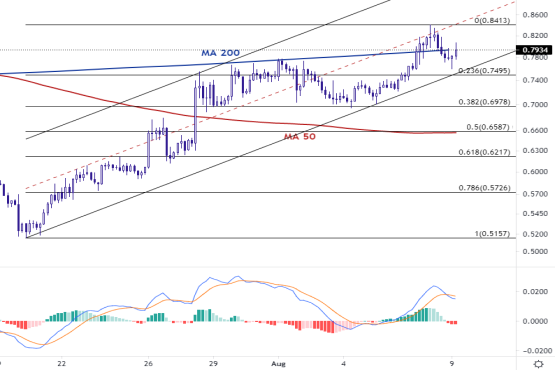 LTC, which lost about 0.9 percent in the morning, is priced at $148.3. When we look at grayscale data, we see that premium is at +39% with the latest price movements. When we check the chain data for LTC, which still appears to be better than the spot performance of the fund performance, it shows that the price of the MVRV Z-Score LTC, which allows us to interpret its current price according to the fair price, is at the purchase levels according to its fair price.

When we consider LTC/USDT parity in technical terms, there is a rising channel formation as of July 23rd. LTC, which continues to move prices within this channel, broke the channel middle band downwards at the weekend and there were withdrawals towards the channel sub-band.If the pullbacks continue with the sell signal coming in on macd during the 4-hour period, we expect fibo'23.60 slice and the $142.84 level, which also corresponds to the channel sub-band, to work in support. 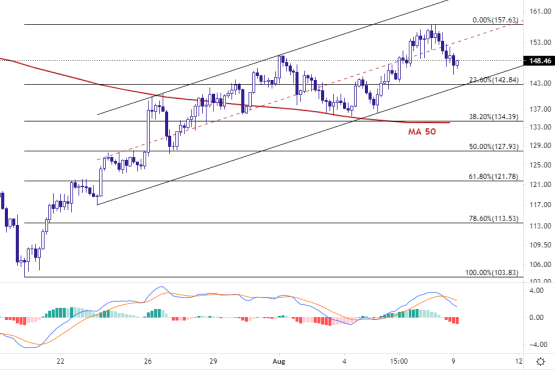 LINK, which lost about 1.15 percent in the morning, is priced at $22.75. While corporate interest continues to be on the DeFi side, many project associations continue to come for LINK. When we look at the Grayscale side, it is seen that institutional investors continue to buy LINK funds.

When we examine the LINK/USDT parity technically, the LINK, which has been retreating towards 38.20 tranches of the Fibonacci correction, which was reduced from the May 10 peak level of $53 to $13.46 on May 10, is seen as holding on to this level in the morning. If the withdrawals for LINK continue and the daily close occurs under the Fibo'38.20 tranche, it is expected to find support in the $20-$21.5 band. 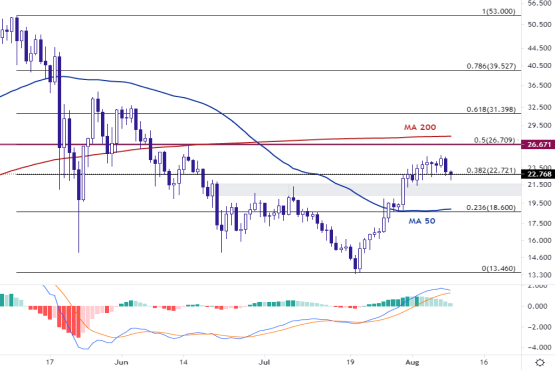 BAT, which lost about 0.7 percent in the morning, is priced at $0.668. When we consider bat/USDT parity technically, BAT, which has been moving prices in the existing rising channel as of July 20, broke the lower band of this channel downwards on Sunday. BAT, which appeared to be continuing to retreat with the breakdown, found support in the morning at $0.660, fibo'23.60. Bat, which has a negative discrepancy in macd over a 4-hour period, has also been signaled to sell. The next support level for the correction movement, which is expected to deepen with four-hour closings below Fibo'23.60, is at $0.615. 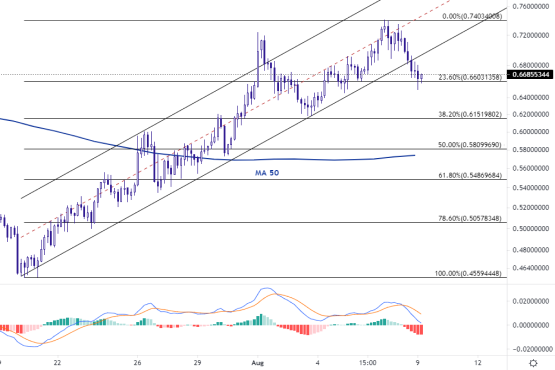