Hong Kong's Financial Services and the Treasury Bureau will introduce a bill imposing license obligation on crypto exchanges which is scheduled to catch up to the 2021/2022 season meeting.

Australian Senator Andrew Bragg has stated that they have to make more clear and comprehensive regulations if Australia wants to be a pioneering country in the crypto world.

Russia Will Launch Digital Currency Prototype by End of Year

A senior Russian official confirmed that the Central Bank of Russia is preparing to launch a prototype of its digital currency towards the end of 2021.

Canadian Central Bank Warns Against Crypto Assets
The report of Canadian Central Bank has stated that although crypto assets like BTC are commonly accepted by institutional investors, they are still risky. Accordingly, the volatility of the cryptocurrency is a vulnerability to Canada's financial system and stable coins pose a risk to the country's monetary system.

While the State Council of the People's Republic of China has suggested bringing an end to Bitcoin mining and trading, the Vice President Liu He has stated that they will introduce strict Bitcoin mining regulations.

Former U.S. Treasury Secretary and Chief Economist at the World Bank Larry Summers has stated that crypto assets will be permanent and Bitcoin will remain digital gold.

Bitcoin starts the week above the $35,000 level. Due to the bad news flow that started after the Bitcoin dominance fell below 40% last week, market dynamics were disrupted by outside intervention. Finally, following the news of the ban on mining activities in China, the statements of the local stock markets that they will stop the mining activity in the region have a negative effect. In this sense, the miners will not be able to produce new supplies and sell the reward coins in their pools, which will be the full side of the glass. There is a decline in both active and new accounts. Last week, we increased $1 billion in net inflows and outflows. While this situation is read as negative, the exit in stablecoins is not positive for the market. Nevertheless, what happens in the technical view also creates the chance of reaction.

When we consider BTC/USDT technically, it clings to the upward trend that has existed since March 2020 on the grounds that it is the admiral of the market in terms of dominance. As long as this trend past the $32,400 level does not fluctuate, it will be open to chances of reaction. Today, the $38,000 and 41,000 zones are in resistance. The RSI has been oversold for the first time since 2021. It shows the return from here. Therefore, the support here can be followed for reaction. 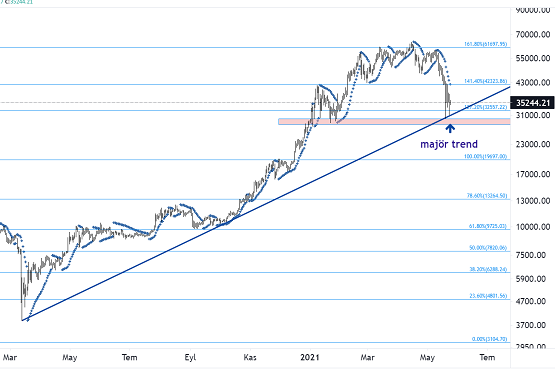 Ethereum is trading with a response close to 3% from the $2,160 level. The decrease in the number of active and new addresses continues. On the other hand, there is news in the media about whether Ethereum can replace Bitcoin and posts praising ETH. ETH investors continue to stake. The amount of ETH locked in the ETH 2.0 phase is trading at an all-time high.

When we consider ETH/USDT technically, we observe the short-term responses after the continuation of the downward trend. Data reactions from the $1,960 level may repeat towards the $2,650 levels. Although there is no clear return yet, our current strategy will be a short-term buy-sell strategy. 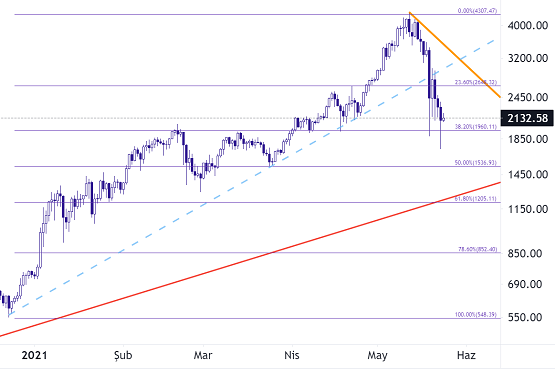 AVAX, which we see that it increases by 4% in the morning hours, is priced at $16.00. When we consider the AVAX/USDT parity technically, we see that it moves in a descending trend. We see that the first resistance level for AVAX, which we see bottoming in the 12.00 and 13.00 $bands, is at $19.95, which corresponds to the Fibo end point correction. If this resistance breaks, we expect the price to move towards the $25.00 levels.

However, we see that it is not possible to talk about an upward movement without breaking the resistance at $19.95 due to the current instability in the market, and in case of a downward movement of the price, the $13.39 level, which corresponds to the 127.20% slice of the Fibonacci retracement level, is the first support point. We predict that it would be appropriate to follow a short-term buy-sell strategy between support and resistance points due to the general decline in the market. 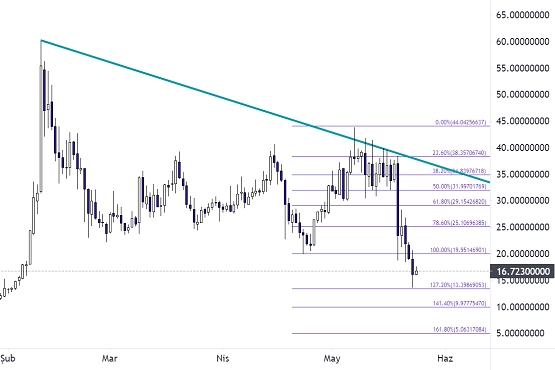 Ripple, which we see to rise by 3% in the morning hours, is priced at $0.81 levels. Ripple's former Chief Technology Officer and Co-Founder Jed McCaleb, whom we did not see any news after the meeting from Ripple and SEC, gathered via teleconference on May 21, stated that it has sold approximately 275 million XRPs since the beginning of May. We see that the bulk and large amounts of XRP sales have an effect on the downward movement of the price.

When we consider the XRP/USDT parity technically, XRP, moving in the direction of the decreasing trend, continues its upward movement in the morning after seeing the $0.64 level by testing the bottom of the Fibo'200 correction level. We see the 161.80% slice of the Fibonacci retracement level, which corresponds to the $0.88 levels, as the first resistance level. In the event of an upside break of this resistance, we think there is a second resistance corresponding to the $1.00 levels and at the same time the $1.00 levels are a psychological threshold. However, its appearance in the market seems to be correcting, accompanied by Bitcoin. Nowadays, as Bitcoin is trying to react, we can watch the reaction of both the litigation process and the oversold for XRP. 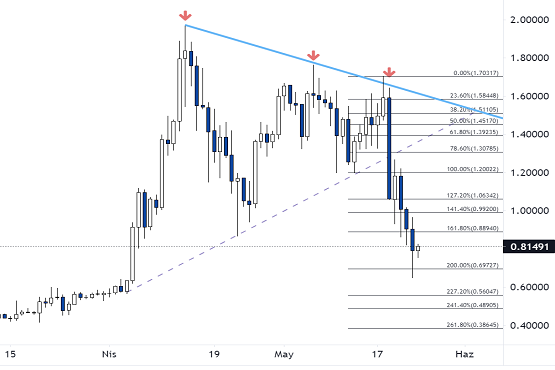 Litecoin is pricing around $150 this morning, up about 4.5%. Looking at the market metrics, it is seen that the MRVR Z-Score is very close to the buy levels. This metric shows investors the status of LTC's traded price relative to its fair price. Although this metric is read positively, it will be useful for investors with a low risk appetite to wait for signals that will confirm that the market is out of a downtrend.

When we consider the LTC/USDT technically, it is priced above the $145.52 resistance today, with the reaction from the support zone at $121.50 yesterday. When analyzed on a daily basis, we see that momentum is approaching its decreasing trend. If the LTC can hold above $145 and sustain its upward movement, acceleration can be seen in upward movements with the breaking of the downward trend of momentum, and upward movements are expected towards the $200 levels corresponding to the falling trend highlighted in red. Except for the algorithmic resistances below, the near resistance levels are located at $168, $191 and $211 respectively. There are also close support levels at $145 and $121 for possible retracements. 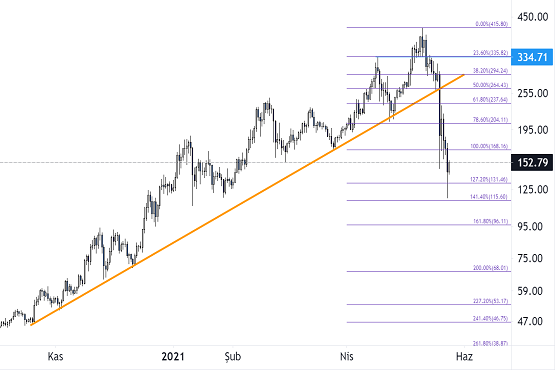 LINK  is pricing at $21.5 levels this morning, up about 8%. Affected by the declines in the markets, LINK saw $15 levels last weekend with a retracement of about 72% from its peak of $52. When we look at the chain data, although there was an exit from the stock markets on Saturday, there was a LINK entry to the stock markets on Sunday. Chain data show that the market is unstable. In this period when volatility is high and the market is unstable, a short-term position strategy close to support and resistance levels will be a healthy choice.

When we consider LINK/USDT technically, LINK, which turned its direction upwards with the support it received from the $16.10 levels corresponding to the Fibo'78.60 slice with the decline experienced yesterday, is priced just below the upward trend that passed through the lows of March and December 2020. When examined in a 4-hour period, we see that momentum breaks its downward trend and the MACD gives a buy signal. Although the parabolic SAR signals in the direction of the buy, it should be considered that the LINK is at an important resistance level. If this resistance break occurs, upward movements can be seen to rise towards $26, which corresponds to the Fibo'127.2 slice, and to $30, which corresponds to the Fibo'141.4 slice. We see that the metrics we specified in the 4-hour period support the short-term rise. If the resistance is not broken and retractions occur, the support levels of $20 corresponding to the Fibo'100 slice and the $16 corresponding to the Fibo'78.6 slice, can be seen. Bitcoin movements will also guide the reactions across the crypto market. 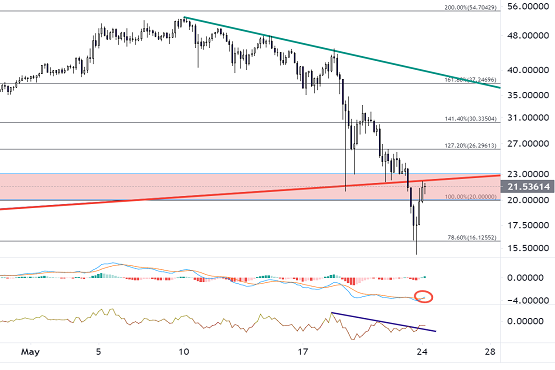 Basic Attention Token, which rose 5% in the morning hours, is priced at $0.60. BAT, which fell as low as $0.45 with the general drop in the market over the weekend, is rising in the morning hours. When we examine the chain data, we see that there has been a decrease in balanced accounts and new accounts since May 21, in other words, the investor's interest in Basic Attention Token has decreased for the last few days.

When we consider the BAT/USDT parity technically, it continues its movement within the sagging area parallel to the descending channel. The first resistance point for the BAT/USDT parity, which tested the $0.55 levels and was priced at $0.60 as of the morning, is the $0.65-0.67 band, and in the case of an upward break, the price levels are at $0.70-0.75. We expect the right price to move. Unless the resistance in the $0.65-0.67 band is broken due to the general decline in the market and the decreasing investor interest in BAT, as we can see in the metrics, it would be more appropriate to follow a short-term buy-sell strategy. With the break of the current level, it can be expected that the reactions will be longer since it will enter the red main channel, which is also seen in the graph. 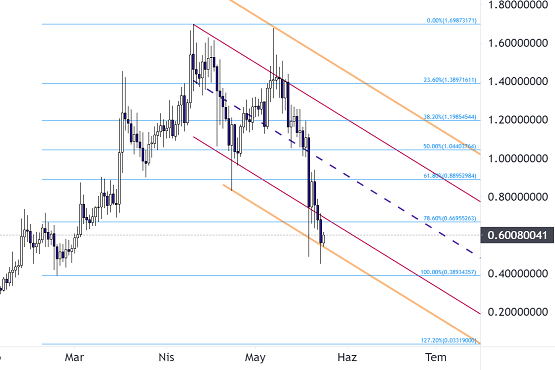