Hospital Established in the Metaverse

The United Arab Emirates has announced that they have started a project to build a hospital on the metaverse together with the Thumbay Group. It is designed as a structure where patients can visit the hospital and doctors with avatars. The project is expected to be completed by October this year. It was announced that the payment system has not yet been decided, but the system will be developed and decided in the future.

One of the important steps for Ethereum's merge, which is expected to take place near September, has been completed. After the successful test on the Ropsten testnet, a merge took place in Sepolia, which is said to be the main testnet of Ethereum in the future. I was told that the test was successful.

Voyager, one of the most important and well-known companies in the crypto asset market, has filed for bankruptcy. Voyager, the 4th publicly traded company with the most BTC, had about 12,000 BTC in its possession. It was known that the company provided broker and brokerage activities, as well as being involved in crypto money etc. He announced that the repayments of the customers whose money and assets remained inside would be made after negotiations with Metropolitan Commercial Bank and the completion of the process.

Nowadays, when crypto assets are going through big problems and many funds are sinking or reaching that stage, we see that important investment and consultancy companies are increasing their crypto asset investments and projects. Goldman Sachs, which has been on the agenda with its explanations and projects for the last 1 month, announced the first Bitcoin Future issued in Asia. Future is known as Standard Futures in Turkey.

CleanSpark Sold All Its Bitcoins in June

CleanSpark, known as one of the major mining companies, announced in June that they had sold 339 Bitcoins they had mined. The company, which increased its production size by 9% in June compared to the previous month, earned $ 8.4 million from this sale. CleanSpark is a mining firm that sells a quantity on a monthly basis that doesn't follow the strategy of holding the Bitcoin it produces like other mining companies. CleanSpark, which is trying to increase its hash rate with its sales, purchased 1800 mining rigs at the beginning of June.

Alameda Research, the company of Sam Bankman Fried, who also owns a crypto exchange, was revealed to have received a $ 400 million loan from Voyager in the data released after Voyager's bankruptcy filing. The collapse of 3AC company, which caused a loss of about $ 650 million, is one of the biggest reasons for Voyager's bankruptcy. Voyager's 2nd largest receivable seems to be a $370 million loan to Alameda Research.

Bitcoin has managed to maintain its upward trend in short periods. BTC, which found a wide range of movement between the 19,000-20,000 band, managed to stay here after the breakdown of the 20,000 level. Although a decline was expected in the markets after Voyager's bankruptcy filing, that decline did not materialize, and Bitcoin even came to the stage of testing the critical 20,400 level.

Bitcoin is priced at $20,363 with a 0.97% cap in the morning hours. Bitcoin, which tested the resistance level of the small channel it is in, managed to break down during the night hours and then returned to the channel. If BTC, which is currently priced near the upper band of the channel, turns away from here, we can say that the support level is 19,700-10,800 levels. In case of a breakdown, a rise to 21,900 levels can be seen. 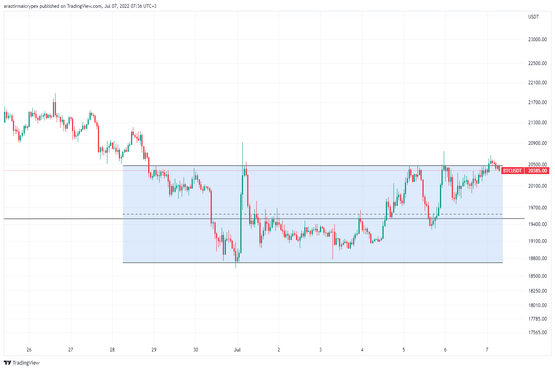 Work continues to merge in Ethereum. The merger of the Sepolia testnet, which was announced in June, took place yesterday. The successful merge was the 2nd test development in the last 1.5 months. It will also be recalled that with the Gray Glacier development that took place last week, Difficulty Bomb was moved to a later date for the last time. As we get closer to Merge, Ethereum will move to a deflationary structure, which will also bring an increase in its price.

Today, ETH, which lost 1.40% of its value in the morning hours, is priced at $ 1170. Ethereum, which is within a small channel on the hourly chart, is currently testing the resistance level. Even though he managed to break it, it is very important that he managed to stay on top of the band. After the breakdown of this place, we can say that the next target is 1230 levels. 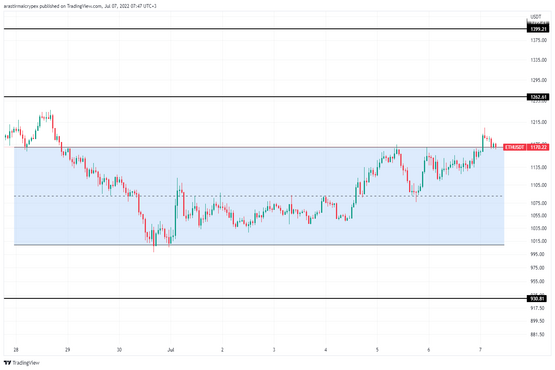 AVAX, which has gained 0.21% as of the morning hours, is priced at $ 19.22. When we look at the 4-hour chart, we see that AVAX, which is in a channel, after testing the channel lower band, advanced to the channel middle band and then broke the channel middle band of 18.6 and came above $ 19. It is a matter of curiosity when AVAX, which has entered the upward trend in the short period, will manage to break the major channel resistance in the $ 21.80-22 band. In the downward movement, attention should be paid to the levels of 17.80 and 18.50. 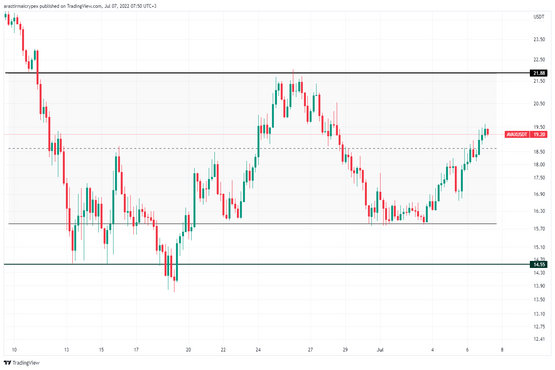 XRP, which lost 0.74% of its value in the morning, is priced at $ 0.3302. XRP, which is in a descending triangle pattern, advanced to the 0.33 level after breaking the resistance level. We see that there is a strong resistance at the 0.3370 level and it cannot break this level. In the upward movement, we can say that the first target is 0.3430 levels after that. 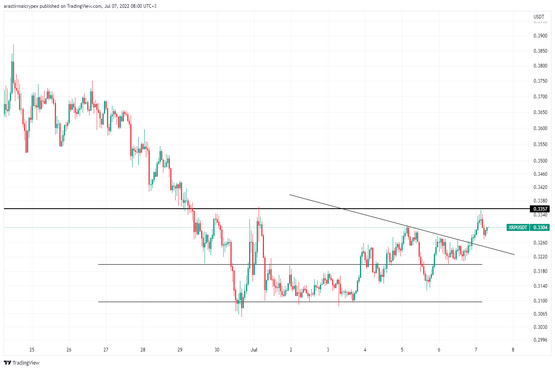 LTC is trading at $49.91, down 0.45% as of the morning hours. LTC is in a channel by the hour. However, the main problem with LTC was investor insecurity after the downward breakdown on July 5. Despite the rise in BTC and almost all altcoins, we can say that Litecoin remains in the $ 50 band, normally BTC should be in the $ 55 band at these prices. LTC traders should pay close attention to the support at 49.20 and we would like to say that in case of a downside breakdown and a daily close, there may be a 20% loss of value. 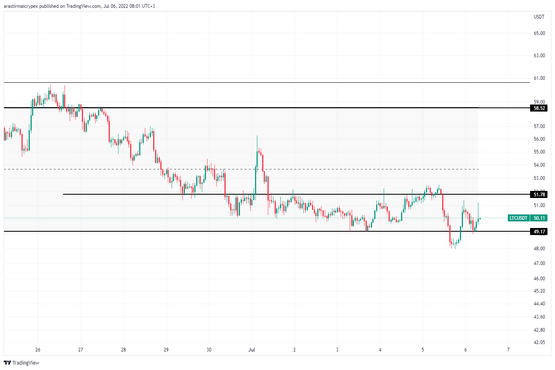 LINK is down 0.82% at $6.39 today. LINK reaffirmed the channel it was in, approaching the middle band and making an upward turn. The breakout of the 6.55 level is very critical for LINK, which has entered an upward trend. If the breakout occurs, the next target is the large channel resistance of 7.40. 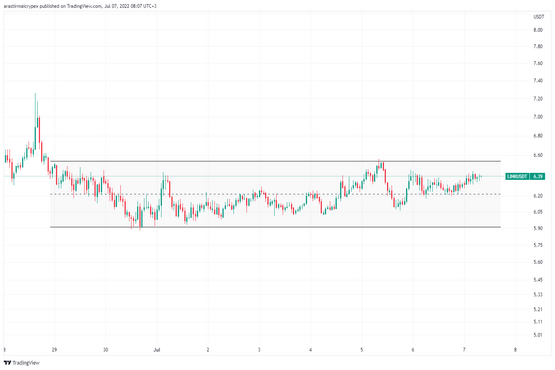 BAT is trading at $0.4507, up 2.20% as of morning hours. BAT, which has been quite strong in recent weeks, has made an upward breakdown of the channel it has been in for months. In the BAT, which has closed and confirmed the 4-hour close above the resistance level of 0.4425, it is very important that the market can stay above this level in the scenario where it does not have a heavy decline. Although we think that these levels may be an opportunity, it would be more accurate to wait for this 2-month channel breakdown to be confirmed on a daily basis. 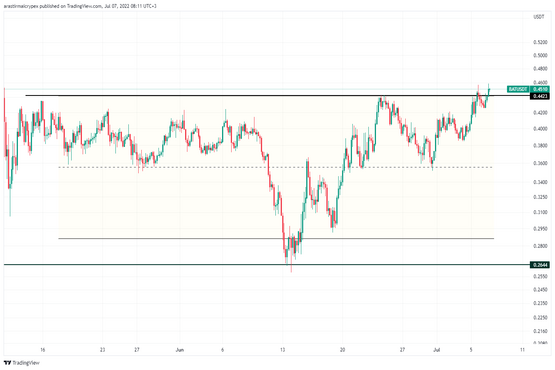