Increasing Demand from Gold to Bitcoin

According to CoinShares data, $ 1.4 billion of institutional money has been transferred to Bitcoin-focused investment products in the past few weeks. Gold also saw outflows of $ 9.2 billion in the same time frame. You can examine the similarities between gold and Bitcoin by clicking the link on our blog.

Bank of Standard Chartered met with the top five OTC investors and four exchanges for a new digital asset trading platform tailored to the corporate market. An Ethereum-based system will be created. After the first testing in the next months, it is expected that the ten largest exchanges in the digital space will take place.

Microstrategy Sets $ 400 Million Bitcoin Investment Prospect
Microstrategy has put up for sale interest notes to institutional buyers that expired within five years. He announced that he will invest around $ 400 million more Bitcoin after the sale. With the first Bitcoin investment, it is observed that it has made a profit of over 50% so far.

Grayscale Bitcoin Survey Reaches Key Data
62% of US respondents are very familiar with Bitcoin now, compared to 52% in 2019. According to Grayscale's analysis, six out of ten people now believe digital assets have a place in their portfolio. 63% of investors expressed concern about Bitcoin's legal status.

Spanish Banking Giant BBVA Starts Crypto Trading and Custody Services
It was announced by a source that the Spanish bank will start selling crypto from Switzerland. BBVA has begun integrating the SILO custody platform built by core banking software provider Avaloq and Swiss crypto experts METACO. METACO is also known to work with Standard Chartered based in London on a corporate surveillance solution.

Crypto Bridge Is Established Between Europe and Asia

SBI Holdings, one of the best known exchanges in Switzerland and the Japanese financial giant, announced a joint venture related to cryptocurrency. It will include a wide range of services such as issuing, listing, trading digital assets and cryptocurrencies as well as regulated digital asset securities, CSD infrastructure and custody.

Bitcoin Analysis - With Bitcoin starting the day behind the $ 19,000 level this morning, we welcome the expected correction in terms of trend health. In the last four weeks, there has been a total of $ 1.4 billion in fund inflows to cryptocurrencies and its pioneer Bitcoin, which institutional investors have been interested in, while this figure was $ 9.2 billion in terms of funds based on ounce. The continued purchases of institutional investors are important to prevent fear in Bitcoin drops. New buying news can boost morale these days when investors are afraid of experiencing the 2017 replay (falling from $ 20k to $ 3,000 band).

When we examine BTC / USD technically; The descending triangle pattern has started and points to a correction. The $ 18,000 zone, which corresponds to the 50% slice according to the Fibonacci retracement levels, and the $ 17,500-17,600 leveling support point where the uptrend has passed. However, although the short-term outlook is weak, we are on an upward trend as a general trend. Because Fibo'50 points to a reference value. Breaking down here may cause the course to weaken. Therefore, reaction movements that may occur throughout the day will be monitored. Although the outlook is weak, the trend is bullish. 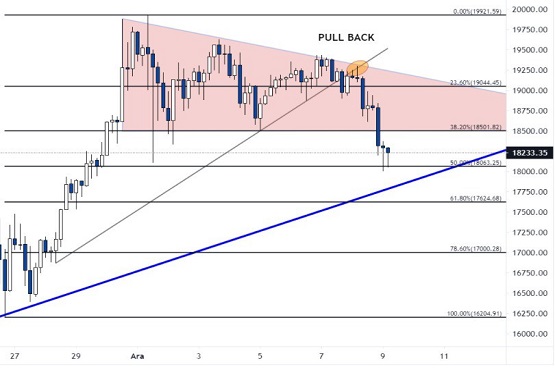 Ethereum Analysis - Ethereum is losing around 1% this morning against the dollar. The ETH 2.0 transition can be said to be a major catalyst, with $ 87.1 million in inflows to Ethereum last week. While the amount locked to DeFi tokens is over $ 14 billion, we see that even though prices decline, demand continues and investors consider the decreases in the direction of buying. 1200 $ call option has been written in Ethereum options. For the future, the ETH 2.0 transition or the expectations for the crypto money market are still alive.

When we consider ETH / USD technically, the minor trend that has been formed since November continues its upward slope. There were previous reactions on this trend and trials of ETH / USD over $ 600. Prices tired at the $ 620 level have entered a correction. Because if this correction ends around $ 550, we will continue in the green uptrend. Waiting for technical balancing and seeing reactions may be healthier before the procedure. 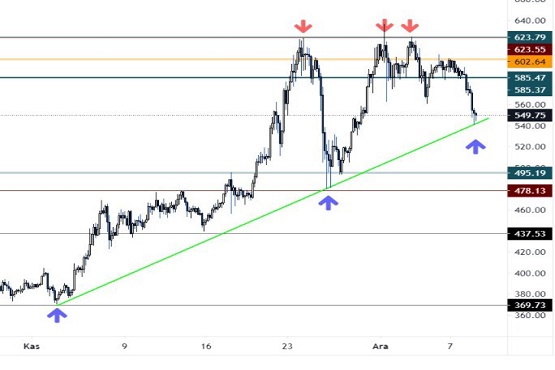 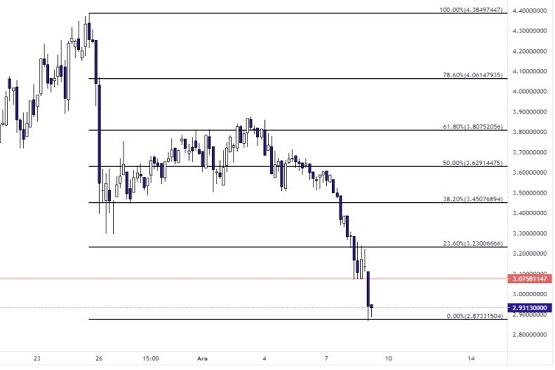 Ripple Analysis - Ripple hovered around $ 0.60 yesterday while retracing around $ 0.55 this morning with an 8% retracement. Every day, a new one is added to the corporate companies that have partnered with the Ripple company. Since the partnerships of Ripple company have also increased the confidence in XRP, the markets have had a more positive trend recently. Some retractions were observed with profit sales following the increases. 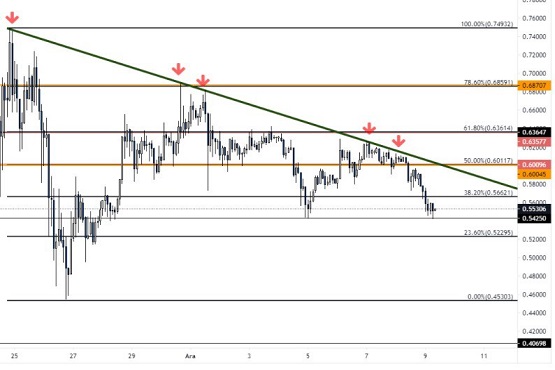 Litecoin Analysis - Litecoin is moving around $ 75 this morning, down 10% from yesterday's transactions. According to Glassnode data, the average transaction volume has increased by 35% compared to the two-day averages in the last day. Especially with the effect of the withdrawals, the selling pressure in the investors caused an increase in the transaction volume. Support levels are followed, although the outlook is weak.

When we consider the LTC / USD technically, withdrawals are observed according to yesterday's transactions on the four-hour charts. LTC / USD, which rose as high as $ 85 in yesterday's transactions, is moving around $ 75 this morning. If possible withdrawals continue, the levels of $ 73.80-71 come to the fore. Unless there is a pullback below $ 65, the target area of $ 103 continues in LTC / USD, where the double bottom formation continues. 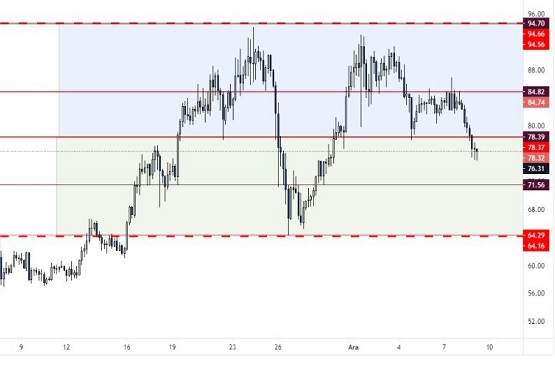 Chainlink Analysis - LINK is moving around $ 12 with a 8% retracement based on yesterday's transactions. According to Glassnode data; Chainlink's percentage of supply in smart contracts reached an all-time high. In particular, with the Ethereum 2.0 update, updates will also occur in smart contracts and agreements with corporate companies have been opened.

Technically, LINK continues its movements in the descending channel from the beginning of December, while continuing its transactions between $ 11.70-12.90. The $ 11.70 level worked as support in the LINK retracements. At the same time, $ 12.40-12.50 levels stand out in transactions above $ 12 in LINK / USD, which continues to operate in the lower support band of the rising channel formed as of the end of September. If the retraction continues, the levels of $ 11.70-11.30 come to the fore. The outlook is weak, but the support for reaction is followed carefully. 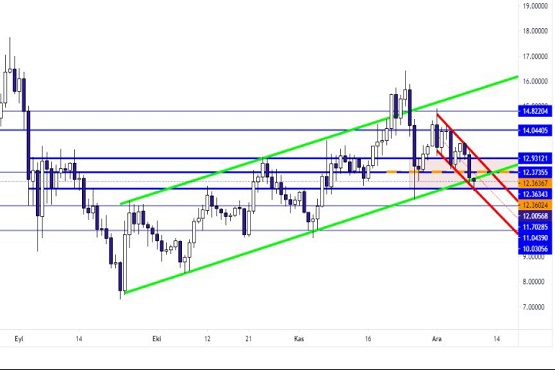 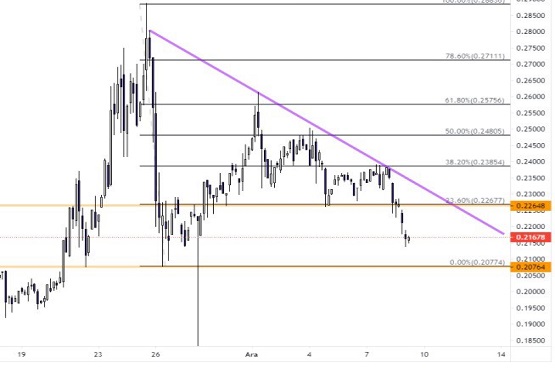