Increasing Interest in Bitcoin in the USA

A Gallup survey indicates that 6% of US investors who have invested $10,000 or more in stocks, bonds or mutual funds own BTC, and US investors hold three times more Bitcoin than they did three years ago.

While financial institutions in Ireland welcome the European Union's move to regulate anti-money laundering in crypto-assets, this regulation will distinguish suspicious cross-border transactions in the bloc, according to the Irish Banking and Payments Federation.

Adaptation to Cryptocurrencies Increases in Singapore

The World Is Searching For CBDCs
While the quest to understand the opportunities and challenges of a central bank digital currency (CBDC) continues in 81 countries, it revealed that countries representing more than 90% of global GDP are researching CBDCs.

An anonymous source at Amazon stated that the firm plans to accept payments in Bitcoin by the end of 2021, possibly laying the groundwork for wider acceptance of cryptocurrencies.

Operation from the Brazilian Police

In Brazil, 33 million dollars were seized in an operation involving crypto exchanges and 17 companies that made money laundering transfers among themselves, while police accused crypto exchanges of being involved.

Investigation from the US Senator

A US senator has launched an investigation into the rise of ransomware attacks, as well as how cryptocurrencies facilitate cybercrime.

While Goldman Sachs has started to provide cryptocurrency-based exchange trading product services to its customers in Europe, US-based JPMorgan has announced that it will provide access to cryptocurrency funds.

Bitcoin, which rose 8 percent in the morning hours, is priced at $ 38,472. On the Bitcoin side, there has been an increase in the number of new addresses on a 7-day average, while net Bitcoin outflows from exchanges continue. While investors tend to hold Bitcoin instead of selling, we can say that Bitcoin has started to attract new investors.

When we look at the BTC/USDT parity technically, we see that it has broken the descending channel that has been going on since June 29, and that it has made its daily opening above its 50-day moving average as of the morning hours. Rising as high as $39,700, BTC failed to hold above the $39,288 levels, which coincided with the Fibo'38.20 correction, and is priced at $38,472. With the closest resistance at $39,288 (Fibo'38.20 retracement), the price could move towards the $43,000 levels with an upside break. On possible pullbacks, we would expect the $35,700-35,900 band to act as the nearest support level. 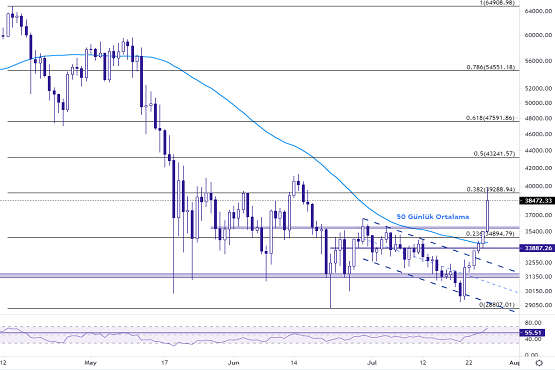 Ethereum, which gained about 6.30 percent in the morning hours, is priced at $ 2327. When we examine the chain data for Ethereum, we see that there has been an increase in the 7-day average of the total number of active addresses and new addresses. However, the total amount of locks for ETH 2.0 has reached 6,379,160 ETH. The outlook is positive considering the updates for ETH, which are expected to take place on August 4th.

When we look at the ETH/USDT parity in a technical sense, ETH, which broke the descending channel and 30-day moving average that existed as of July 7 in the 4-hour period, from the $ 1890 levels last week, also broke the important resistance levels upwards and turned them into support. ETH, which broke the resistance at $2280 with the opening of the daily candle, with high volume, made the 4-hour close above this level. MACD crossed up again and gave a buy signal in the 4-hour period. If there is no 4-hour close below the $2280 level, the rises towards $2470 are likely to continue. 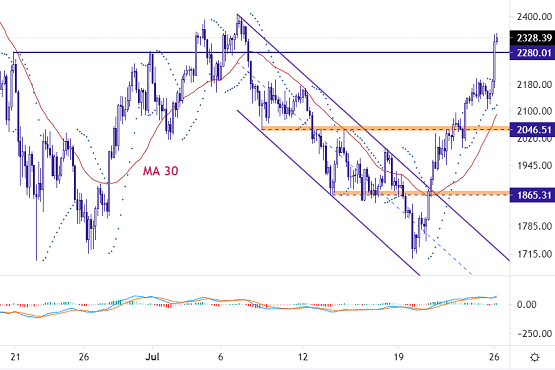 AVAX, which gained about 8.20 percent in the morning hours, is priced at $12.15. When we consider the AVAX/USDT parity technically in the 4-hour period, AVAX, which broke the descending trend that existed as of July 7, at the level of 10.44 dollars last week, provided permanence in the upward movement. Today, with the daily candle opening, AVAX, which broke the important resistance level at $11.83, closed the 4-hour close above this level. As of July 20, there is an ascending channel formation. In AVAX, which is priced near the $12.25 level, which coincides with the upper band of the channel, the MACD signaled in the direction of buy. If the upper channel band is broken, the rise will continue towards the $12.90-13 level in the short term. 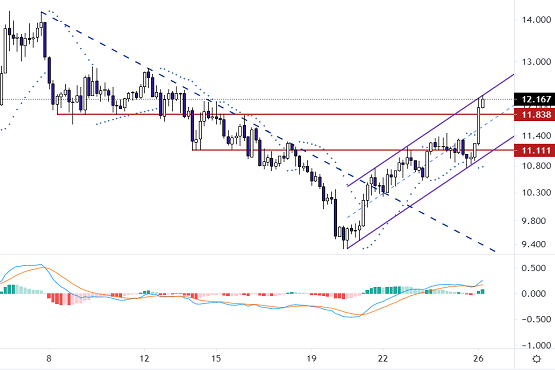 Ripple, which has risen by 9.26 percent in the morning hours, is priced at $ 0,663. The latest development regarding the lawsuit between Ripple and the SEC has occurred recently. Ripple shared an article supporting the fair notification defense. While drawing attention to the statements of SEC commission members Peirce and Roisman, it was emphasized that there was an internal conflict between the top management of the SEC and some members. The reason was cited as SEC Commissioners Peirce and Roisman openly declaring that there is a clear deficiency in the laws regarding the implementation and trading of digital assets in securities laws for market participants. It is possible to say that the positive course for Ripple continues in the case.

When we look at the XRP/USDT parity technically, we see that it has broken the descending channel that has been going on since June 29 and is priced at $ 0.66 as of the morning hours. For XRP, the closest resistance level is in the $0.67-0.68 band, if the resistance at these levels is broken to the upside, the $0.70 levels can be tested. On any possible pullbacks, we would expect the $0.642 levels to act as support, but if this support is lost, the price might pull back towards the $0.619 levels. Waiting for a resistance breakout or making new purchases on pullbacks near support may be a healthier strategy. 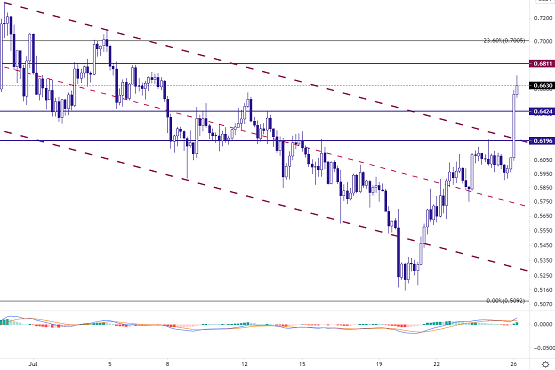 Litecoin, which gained 7.66 percent in the morning hours, is priced at $ 137. When we analyze the chain data of Litecoin, which has turned its direction up with the positive trend in the market, we interpret the increase in the number of new addresses positively. In addition, when we look at the MVRV Z-Score for Litecoin, we see that it is still below 0, that is, it still points to a discount for Litecoin in the long run.

Technically speaking, the LTC/USDT pair started the day above the weekly DEMA ($ 130) level and recently broke the downward trend that has been going on since May 10 and has remained at these levels. The closest resistance level is $143.82, which coincides with the 23.60% retracement of the Fibonacci retracement level, and if this resistance is broken to the upside, a move towards the $156-157 levels is possible. We would expect the 7-day DEMA to operate as the nearest support level, which coincides with the $130 levels on potential pullbacks. MACD maintains its signal to buy. 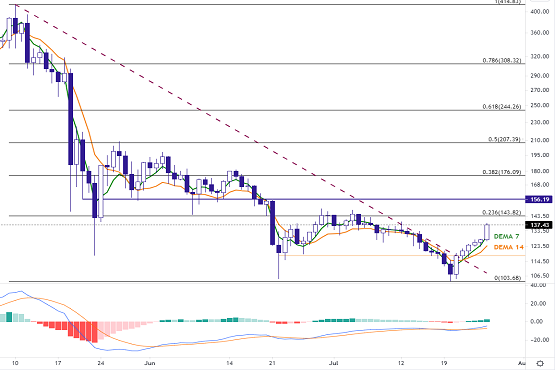 LINK, which rose 11 percent in the morning hours, is priced at $ 18.65. When we examine the chain data of LINK, it is possible to say that there has been a slow recovery in the number of active and new addresses, which has been on a downward trend for a long time on the 7-day average, and that the interest of investors in LINK has started to revive. If the positive trend in the market continues in the short term, it can be expected that the trend will progress positively on the LINK side.

When we look at the LINK/USDT pair technically, we see that it is priced above the Fibo'78.60 retracement level ($17.96), and the closest resistance level is the $19.93 level. If the resistance at $19.93 is broken to the upside and sustained at these levels, we expect the price to move towards the $22.76 levels. In case of a pullback, buying near support and selling near resistance can be a healthy strategy, with the closest support level to $17.96 to follow. MACD and Parabolic SAR protect their signals to buy. 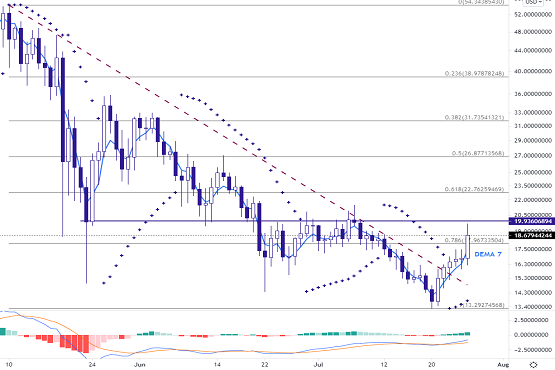 BAT, which gained about 7 percent in the morning hours, is priced at 0.581 dollars. When we consider the BAT/USDT parity in a technical sense in the 4-hour period, although the price movement continued within the descending channel as of May 27, with today's daily candle opening, the upper band of the falling channel in BAT ($ 0.546) and at the same time with the rapid rises in the whole market It broke its 30-day moving average ($0.555) to the upside. It maintains the stochastic buy signal in the 4-hour period. Breaking the critical resistance at $0.5675, BAT closed the 4-hour close above this level. On pullbacks, we would expect the $0.5675 level or the 30-day moving average to act as support. The next target is read as the $0.648 level. The outlook for BAT is positive considering the overall market conditions. 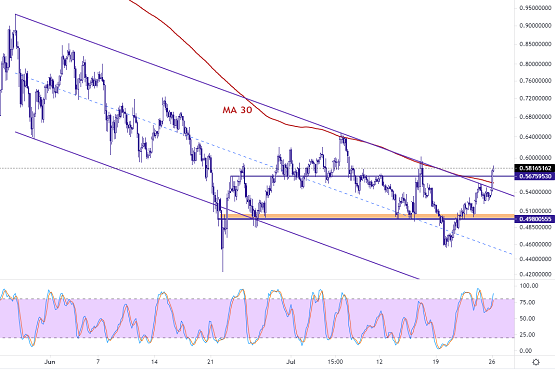